New aid to Ukraine from the USA, shelling of Ukrainian cities, and another decree of Putin: the last night’s highlights
898

In a case sending waves across Russia, Andrei Danilov, a member of the Sámi minority indigenous group in the far-north region of Murmansk, is suing the government for denying him the right to hunt without a license. The case is reminiscent of the long and unaddressed history of the Russian state suppressing indigenous minority groups and erasing their cultural heritage.

Hromadske’s partner outlet Novaya Gazeta traveled to Murmansk to find out more about Andrei Danilov’s case and the ongoing fight indigenous minorities like the Sámi face in Russia as they try to preserve their identity.

“They must live in a chum”

Andrei Danilov arrives in court wearing his traditional clothing: a belted, blue gákti (a short “jacket-skirt”), embroidered with beaded patterns. Against the backdrop of the bland courtroom walls, the white-blonde locks and dazzlingly blue robes of the Sámi women observing the hearing stand out like an aesthetic protest.

Andrei knows he will lose the case, but he came nonetheless. During the hearing, he often quotes lines from the Norwegian film The Kautokeino Rebellion: “We must speak, even when there is no hope!”

This film is based on the true story of a Sámi uprising that took place in response to the exploitation of their community in mid-nineteenth-century Norway. The Norwegian authorities arrested the people who took part in the revolt and the leaders were executed. 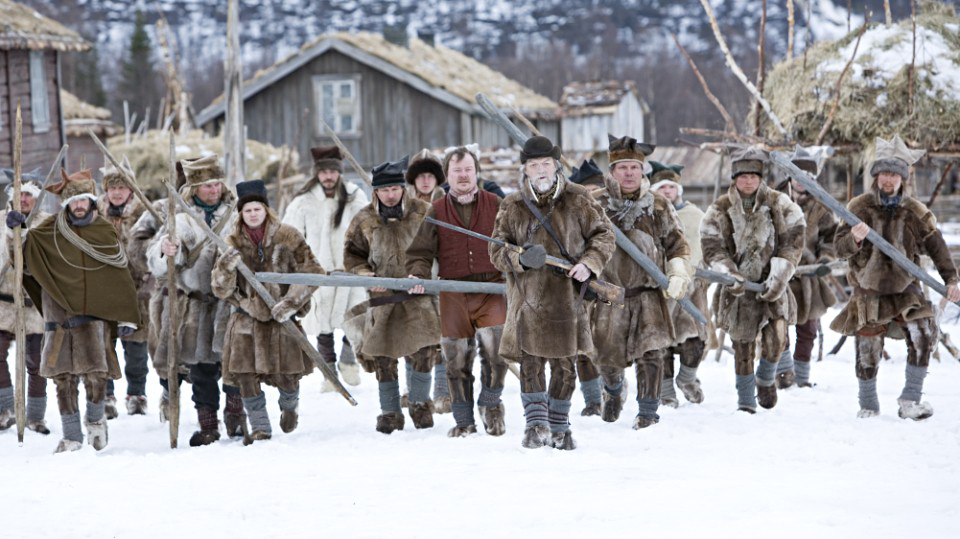 Shot from the film "The Kautokeino Rebellion"

– Do you work? What is your source of income? The judge asks Andrei.

– I’m an electrician, I receive a salary.

– Does that mean hunting is not the source of your livelihood? The judge responds in a follow-up question, hinting at something. 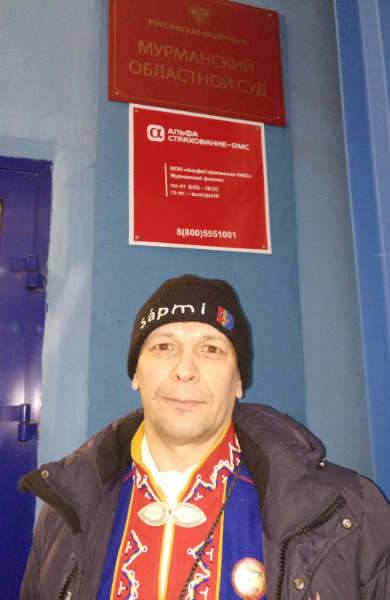 Andrei’s lawsuit has been going on for a month – in part because the authorities seem to doubt his “traditional way of life” and want proof that he is a “real” Sámi.“Real,” according to Russian officials, means living in the tundra and relying exclusively on hunting and fishing. Ideally, it seems, you would also be illiterate.

As in other cases, the representative from the Environment Ministry appears to be drawing on the Ministry’s experience in neighboring regions where the indigenous people are nomadic; completely disregarding the fact that the Sámi were driven from the tundra, forcibly resettled and underwent assimilation less than a century ago.

“They must live in a chum,” the representative insists, referring to the type of temporary dwelling that is traditional among nomadic reindeer herders in northwestern Siberia.

But this claim is taken from any law. The implication is that in order to receive the benefits they are due, the Sámi must abandon “civilization.”

Today, Russia is home to 260,000 people from indigenous communities – who constitute just 0.2 percent of the country’s population. The government officially recognizes 40 separate indigenous groups in the North, Siberia and the Far East. These regions used to belong to indigenous people almost exclusively, but succumbed to creeping Russian colonization starting 1800s and continuing into the Soviet era in the twentieth century.

While Russia’s indigenous groups are guaranteed the right to hunt without a license by law, the federal Ministry of Natural Resources and the Environment (Minprirody) is demanding that Andrei Danilov note his indigenous status on a “hunting ticket.” This marker is intended to indicate that the person in question does not need to purchase a hunting license, so long as they are hunting for personal consumption and as part of their traditional culture.

However, other members of the Sámi minority in the Murmansk region have been repeatedly forced to prove their ethnicity in court, in order to receive the benefits they are guaranteed by law. And officials consider other state documents where nationality is recorded, such as military IDs, birth certificates and marriage certificates, as insufficient proof. 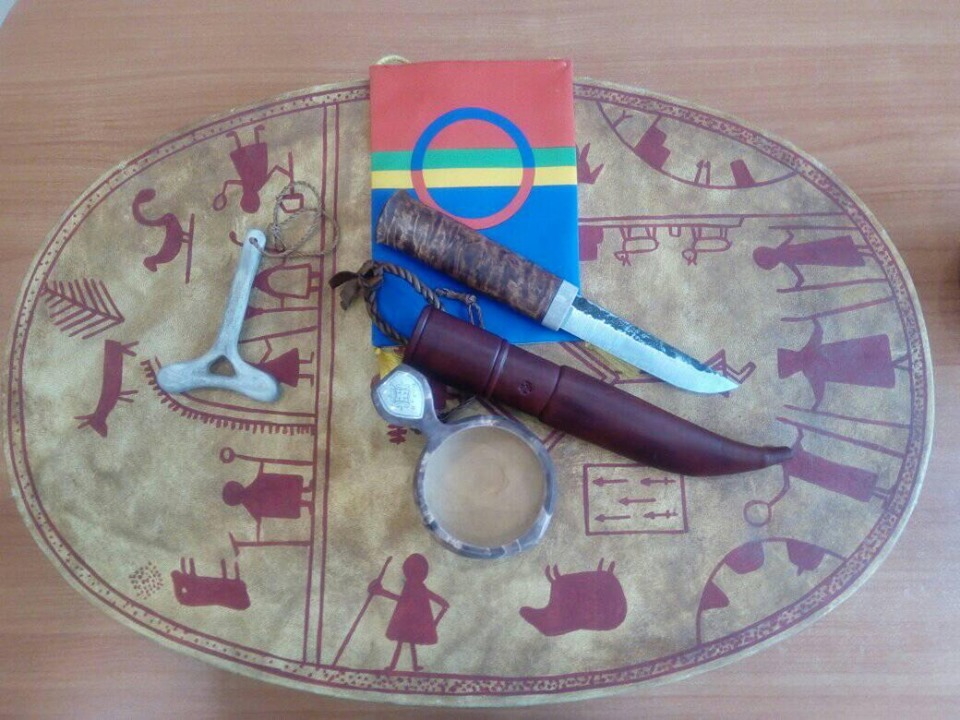 Knife, flag and the very Sámi drum that would be taken to court

The Sámi fear that this is a step towards the authorities extorting members of indigenous communities into buying hunting licenses. And although Andrei Danilov is not the first Sámi person to file this type of lawsuit in Murmansk, the Sámi have yet to win such a case.

Members of the Sámi indigenous group live across four countries: Norway, Sweden, Finland, and Russia, but they do not recognize borders. For the Sámi, hunting is an element of their traditional way of life; a part of their culture that is necessary for their people’s survival.

A traditionally semi-nomadic group of reindeer herders, the Sámi faced repressions and underwent forced assimilation when the Soviets colonized the tundra for its mineral deposits and built factories in the far-north. During the purges under Soviet leader Joseph Stalin in the late 1930s, those who tried to maintain their ethnic identity were shot. In their efforts to industrialize the Arctic, the Soviets demolished Sámi graveyards and destroyed the pastures that their reindeer needed for survival. These animals are now considered an endangered species.

The Sámi suffered a long history of discrimination and persecution across all region: they used to hide their ethnicity and their language was often banned. Today, the Sámi play a decisive role in political decision making across all Nordic countries. Except in Russia. Now little more than half of the 1,600 Sámi people living in the country know the Sámi languages, at most. This number is all that’s left of the people who used to inhabit two-thirds of the Kola Peninsula. In far-northern areas like Pechenga, Kovdor, and Monche-Tundra, factories built on Sámi territory are the biggest taxpayers in the region today. But they do not pay rent to the people deprived of their land.

A Separatist and an Extremist

Recently, an amateur youth theater in Murmansk staged a play about the Sámi. The author did not write a single word of the script – it was all direct speech based on hundreds of pages of interviews recorded with representatives of the Sámi community.

The play shared the pain and grief of fighting for the right to your own identity; resisting being turned into a decorative “regional cluster” for tourists; being forced to play dress-up and treated like a “curiosity.” A number of the Sámi activists who attended the premiere cried – they are paying for this with their lives.

For many of them, this was one of the first times in their coexistence with the Russians that they felt their pain was understood.

Unlike Andrei Danilov, few people wear traditional Sámi clothing in everyday life. For many, their ethnic identity is a burden rather than a source of pride. It has been this way ever since the Sámi underwent repressions and forced assimilation during the Soviet period only to have their historical contributions overlooked.

For years, Andrei has been campaigning for a monument to the Sámi people who, along with the reindeer breeders from the Komi and Nenets regions, were part of reindeer transport battalions on the Karelian Front during World War II; taking supplies to the front and transporting 10 thousand wounded from the front line.

There is no monument to them in Murmansk and no political will or funding from the regional capital for such a project. Nevertheless, Andrei is crowdfunding himself – bit by bit. 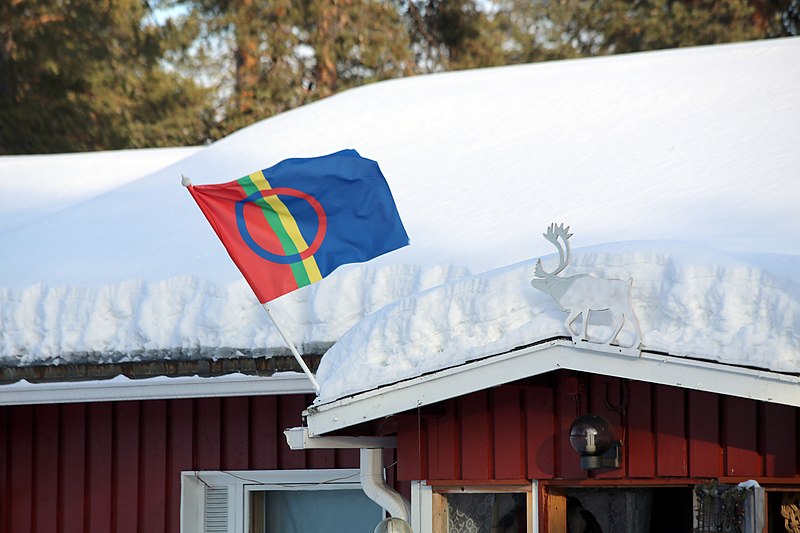 Sámi flag at a reindeer farm in Inari, Finland.

Nevertheless, Andrei is stubbornly and persistently fighting for the right to be himself.

Preserving a Traditional Way of Life 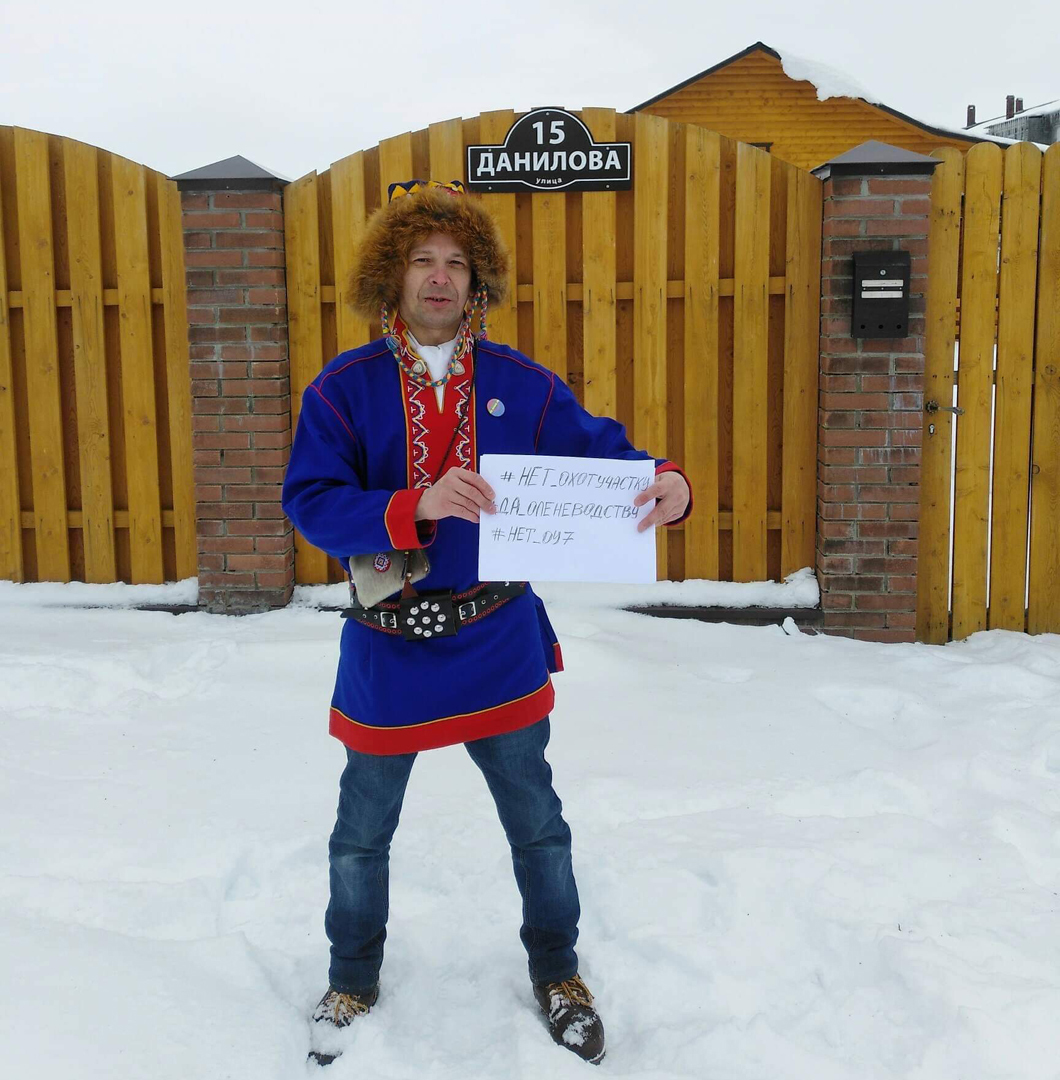 Back in court, the judge repeats the same leading question to Andrei Danilov:

– You don’t need to hunt to obtain food?

Andrei proceeds to explain basic facts to the court. He’s not a lawyer – he’s simply repeating the law “On Hunting” which guarantees him the rights he is seeking. He also shares an opinion from the Constitutional Court and a court decision from a similar case in the Siberian city of Krasnoyarsk, where the court sided with the local residents from the Evenki indigenous minority.

The hearing sticks to a strict schedule: the time between the deliberations, the recess, and the judgment takes no more than twenty minutes. In the end, the panel of judges denies Andrei Danilov the ability to exercise his legal hunting rights.

The representative from the Environment Ministry offers a piece of advice: no one is interfering with preserving traditions by buying a hunting license.

Andrei smiles and says: “The Sámi hunters are starting their own community organization and will now fight together against rights violations.”

rights of minorities Russia
More on this topic
5703