“Our Kids”: Crimean Resistance to Political Arrests In Numbers
15155

At the “Barrier” post on the road to Shiyes. Photo: Anna Shulyatyeva, exclusively for Novaya Gazeta

For a year and a half environmental activists have been living in the forest to prevent the construction of Europe’s biggest landfill at the Shiyes station in northern Russia. Over time, activists set up an improvised encampment, with watchposts around the perimeter where they remain on duty around the clock; rotating in three-hour shifts to block the path of the heavy equipment needed for the landfill’s construction.

Hromadske’s partner outlet Novaya Gazeta, has been covering the anti-landfill protests since day one and even set up a bureau at the Shiyes station in northern Russia to monitor ground zero of the country’s environmental movement.

These advocates are part of a larger wave of environmental activism developing across Russia, where environmental degradation is becoming dire. According to the activists in Shiyes, the landfill would turn into a swamp, spreading poison to the local environment through the area’s complex system of rivers and lakes.

Post-Soviet visual: the residents of Surgut, Siberia formed a human chain around their park earlier today, protesting against plans to cut it down and replace it with a bus terminus pictwitter.com/

Local photographer Anna Shulyatyeva visits the protest hot-spot regularly, to take pictures and talk to the activists. In a special photo report for Novaya Gazeta, she shares their stories. 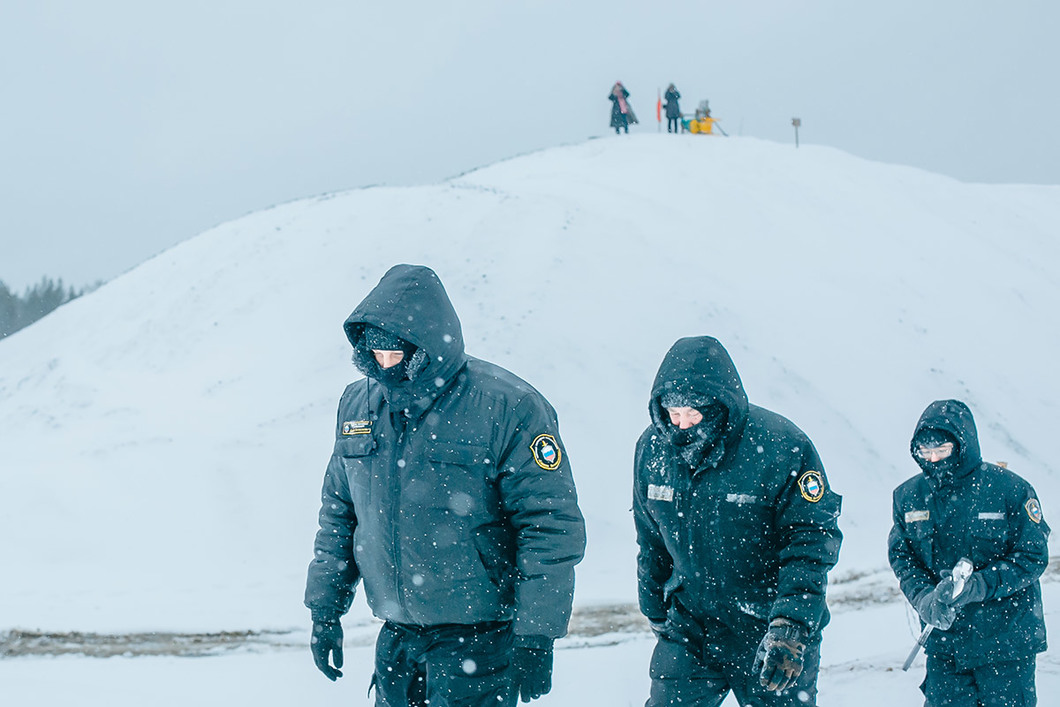 Employees of the private security company "Guarantor of Security" guarding the construction site. Activists from the eco-camp are watching them from the mountain. Photo: Anna Shulyatyeva, exclusively for Novaya Gazeta

﻿﻿Moscow and the Arkhangelsk region reached the agreement on building a landfill in Shiyes in 2018, which was meant to take in 500 thousand tons of gar﻿﻿bage from the Russian capital annually. Preparations for construction began almost immediately, despite the fact that the developer, Tekhnopark LLC, was lacking the necessary documents and environmental assessments.

The locals responded with a rebellion complete with everything from pickets and rallies to petitions and letters to President Vladimir Putin, e﻿﻿xplaining the detrimental impact the landfill would have on the local environment.

In the summer of 2019, the government cut off access to the Shiyes railway station with a ban that keeps trains from stopping there. The authorities have tried to disperse the tent city on multiple occasions and have even opened administrative and criminal cases against the activists.

In late October 2019, army units from the Russian National Guard entered the neighboring village of Urdom, in an attempt to dismantle the crossing into Shiyes. Nevertheless, the site’s defenders did not give up and construction on the landfill remains frozen, while the developer is collecting the necessary documents.

Far-right demonstrators then appeared in Shiyes in mid-November 2019. The landfill’s investor allegedly brought them in from a neighboring region, in an attempt to turn the peaceful demonstration into a violent rebellion and give law enforcement a pretense for dispersing the encampment by force.

Activists are still there protesting and do not plan on leaving. On top of halting the construction, now they are also demanding the resignation of the regional governor and the cessation of nuclear testing in Nyonoksa – a rural locality on the White Sea where an explosion caused a radiation accident on August 8, 2019 that killed two people and injured six others.﻿﻿﻿﻿﻿﻿﻿﻿﻿﻿ 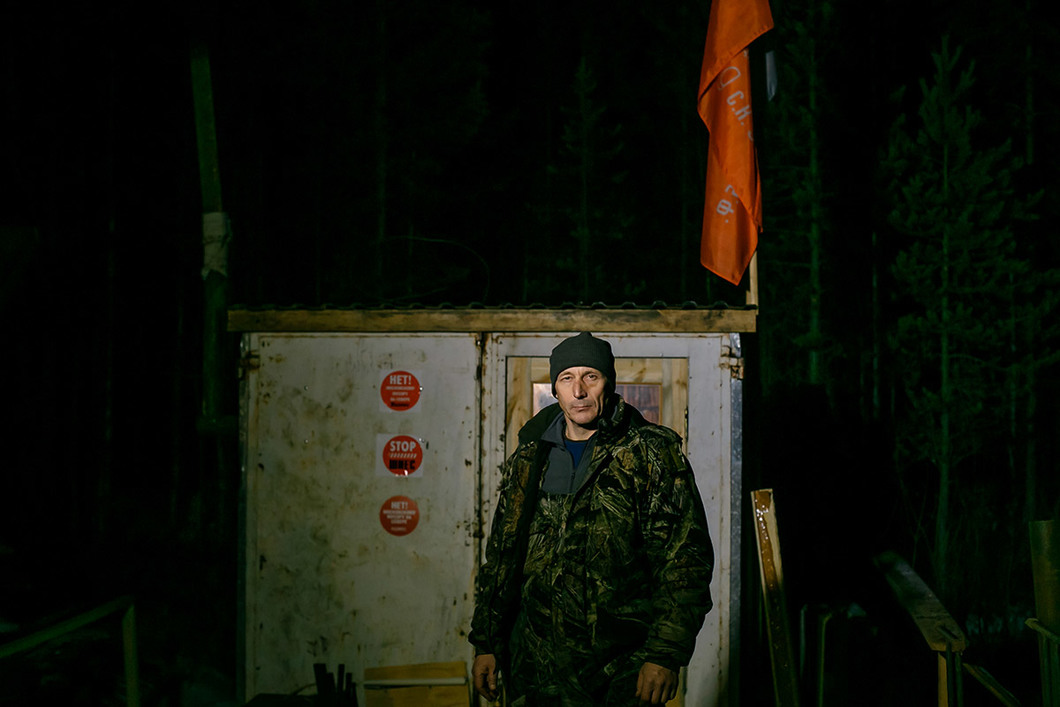 ﻿﻿At the entrance to the cabins at the "barrier". Photo: Anna Shulyatyeva, exclusively for Novaya Gazeta

“We panicked when we found out they were building a landfill at the abandoned station and quietly cutting down the forest. The dump is located on the river that our drinking water comes from. It’s better to live hungry but healthy than to die filled with cancer.

At the ‘Barrier’ it’s mostly pensioners standing, even people on crutches come, and we are located in a war zone. People even lie on the road.

I was in clashes with the [private security guards]. During the standoff, a trailer was sitting on the road in the forest. The equipment left the area, the activists didn’t let it in. A drunk truck driver threw the excavator driver out of the cabin and sat there himself. He demolished the trailer, which had people in it, with the backhoe. One person came away with broken bones. But in this case,﻿ the activists were prosecuted, not the excavator driver.”﻿﻿﻿﻿ 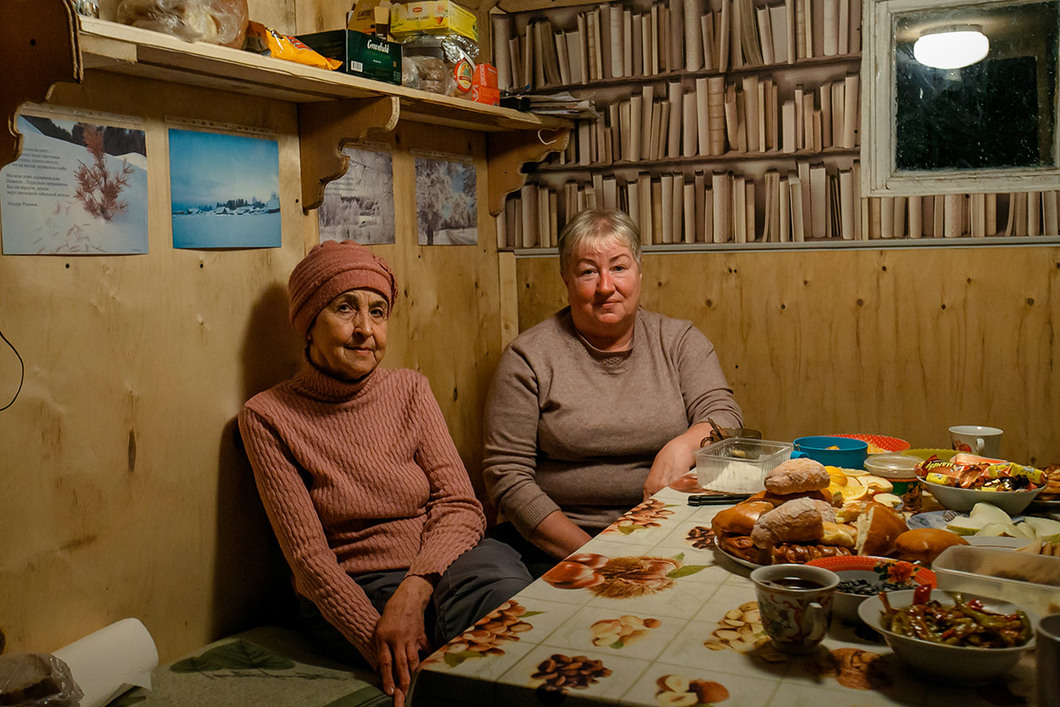 Lyudmila and Tatyana in the cabins at the “Barrier” post. Photo: Anna Shulyatyeva, exclusively for Novaya Gazeta

“Although I am from Volgograd, I have lived forty years of my life in Urdom attaching my entire soul to our nature: the forest is good, and the marshes, and the people.

They cut down the forests: [this is] the second year that we haven’t seen neither berries, nor mushrooms. Nature suffers from people’s misconduct. Six to 12 people go to the barrier every day like a job. I would go to Shiyes too, but my health won’t allow it.

At the beginning we had one bonfire. People stood for several hours in the rain with a shield and now they are standing no matter the weather. Irina Andreyevna comes to us regularly from the neighbouring village, she’s 83-year-old. She has a pacemaker. She says: ‘I have already lived, but I will go to the post and defend our land for the sake of [my] eight grandchildren and sixteen great-grandchildren. How can I die peacefully knowing they built a dump here?” 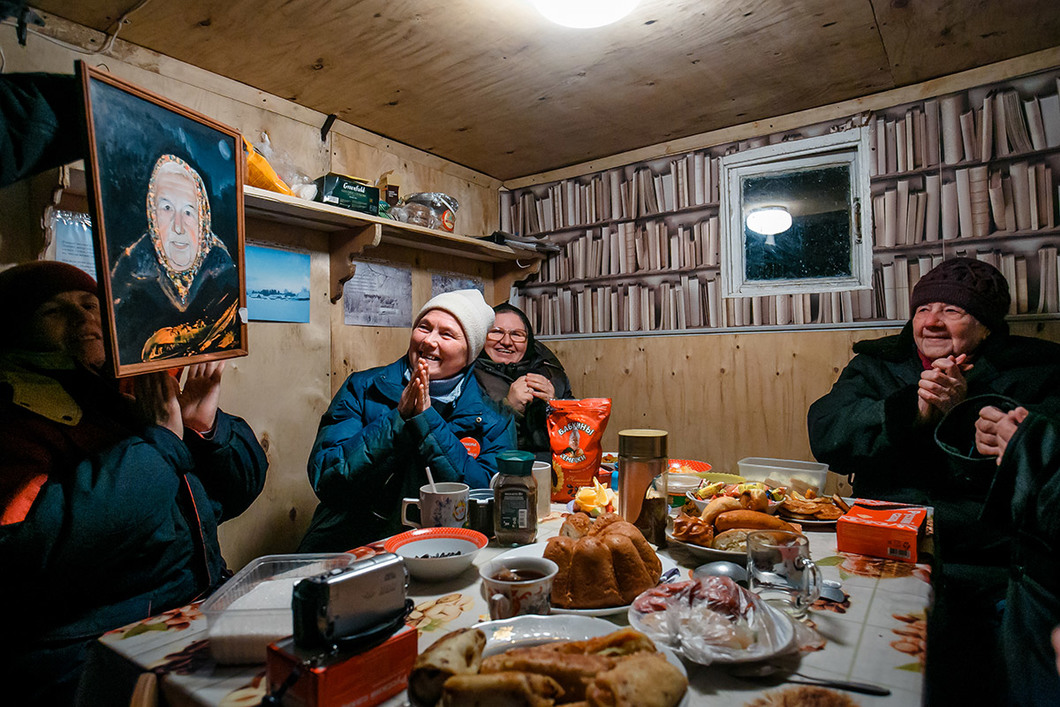 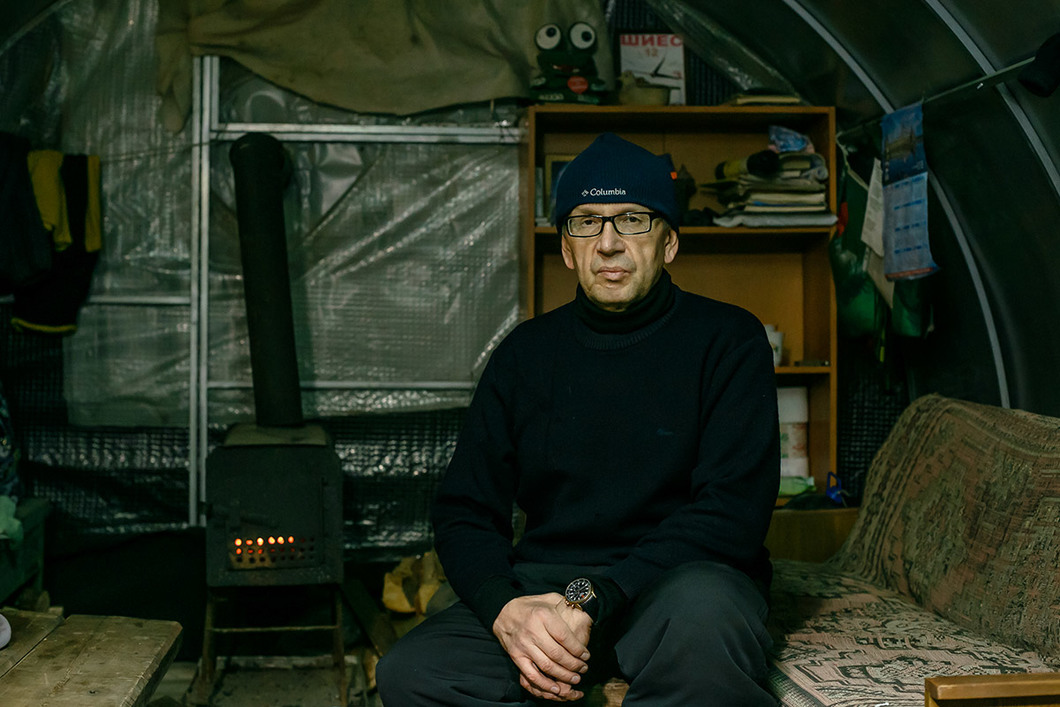 In the greenhouse at the "Barrier" post. Photo: Anna Shulyatyeva, exclusive﻿﻿﻿﻿﻿﻿﻿﻿﻿﻿﻿ly for Novaya Gazeta

“I already have three convictions for activities in Shiyes. They accused [me] of organizing an unsanctioned rally at the station, vigilantism and insulting police officers. You need to see how out-of-control the [private security guards] behave: they beat activists without badges or any other signs of identification. When I became a witness to this, I intervened, but for the court I was ‘illegally protesting’. They didn’t consider the appeal and so I got a criminal record.

I did not come to the camp immediately, but in the spring [of 2019] I understood that not participating is indecent. In my youth as a doctor, I often went there and in general, I am connected to this area by my genes. Standing at the barrier, I don’t think about myself but about our grandchildren, our children, those who will remain here.” 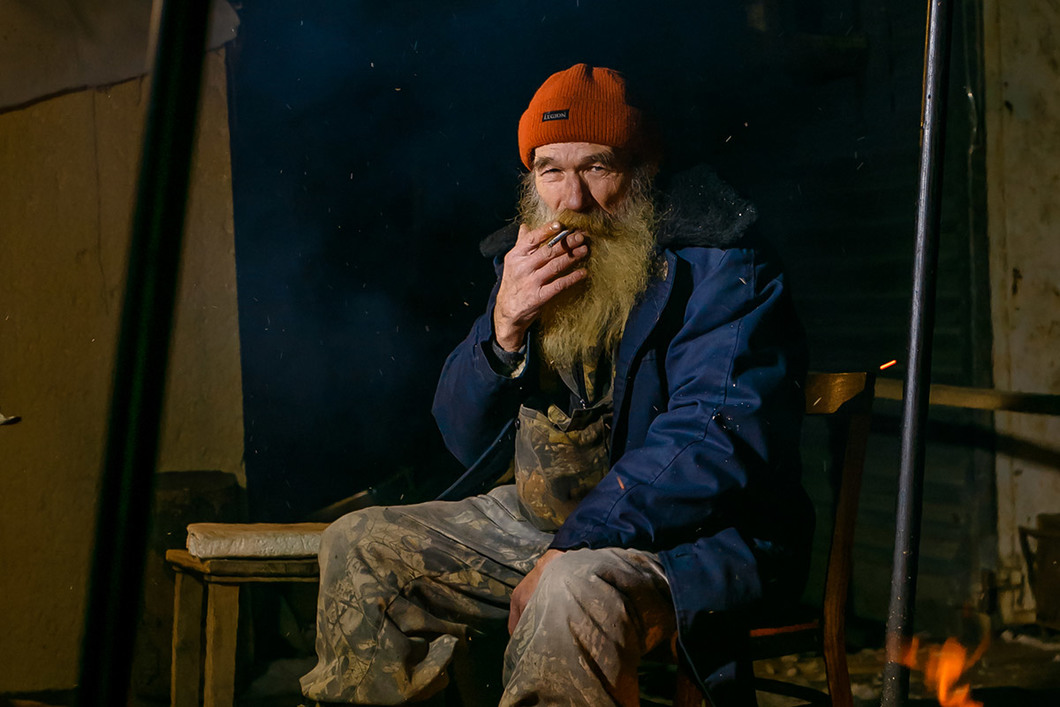 At the "Eternal Flame" at the "Barrier" post. Photo: Anna Shulyatyeva, exclusively for Novaya Gazeta

“When I learned about the construction of the landfill, I thought it was nothing serious. Building something thousands of miles from Moscow – that’s [throwing] money away. But no, it turns out, [it’s money] in the pockets of our oligarchs.

At first, everyone was being good: you could talk with the [private security guards]. One of them shared a story of how he had guarded the Sochi dump. But now they are hiding, not talking and engaged in lawlessness: they can jump into a fight or start things. What’s more, not one of the [private security guards] has been convicted for battery, but among our people, they’ve accused Marina Dzyuba of battery six [times].” 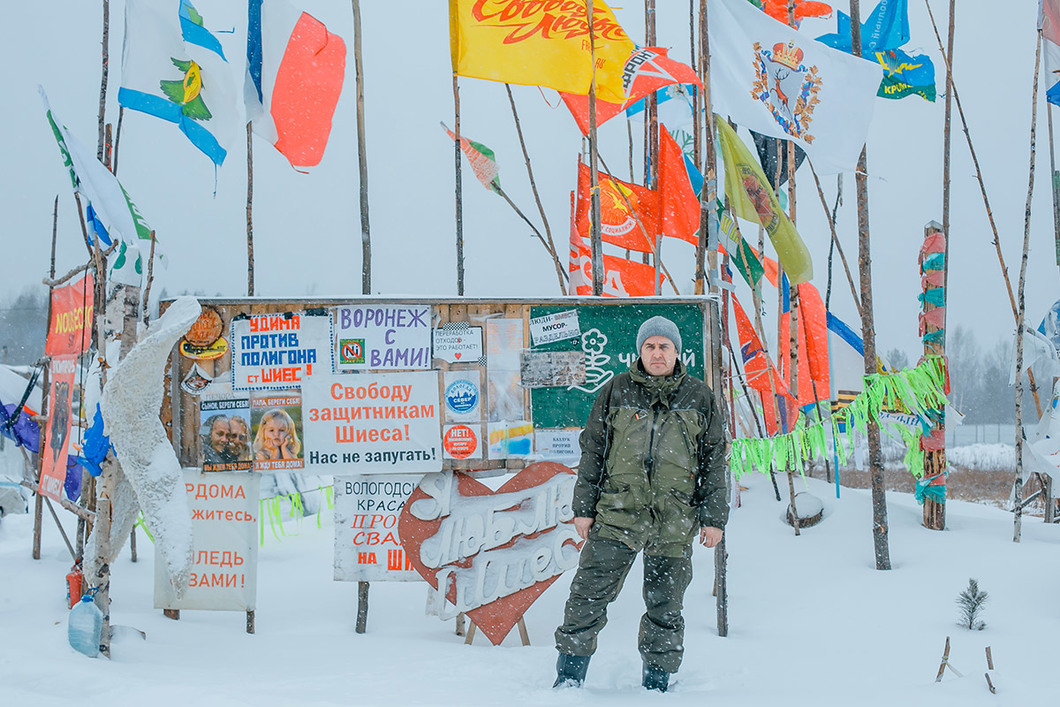 At the tent camp in Shiyes. Photo: Anna Shulyatyeva, exclusively for Novaya Gazeta

“I came from Israel. When I read the news about Shiyes, I thought it was one of the hottest spots in the country. The start of a new story is coming out of it. If this place is not the center of a revival, it’s clearly a focused civil society.

Upon arrival, I expected to see more people, not just locals. But the majority [of people] here are from Arkhangelsk, Kotlas and the surrounding regions. Other people probably haven’t taken up this kind of civic position. This situation is a vivid example of how the interests of the federal center and the regions diverge. And for these people who represent the interests of the region, I would go anywhere.”

/ Translated and adapted by Eilish Hart. Based on materials by Anna Shulyatyeva of Novaya Gazeta. Courtesy of the Russian Language News Exchange.