Russia’s statement on annexation, Ukraine is applying to join NATO, strike on Zaporizhzhia: the highlights of the day
Editors' Choice
8553

Maya Moskvych is a veteran. She served as a volunteer fighter for several years, had six rotations, and planned to withdraw from the front line only after victory.

However, things turned out differently. Maya was forced to return home due to poor health, and victories came to her later—at the Invictus Games. She won two gold medals in archery at the international competition, established her own club in the western Ukrainian city of Lutsk, and began training children.

hromadske spoke to her about the Maidan, the front line and rehabilitation, her bows and archery champions. 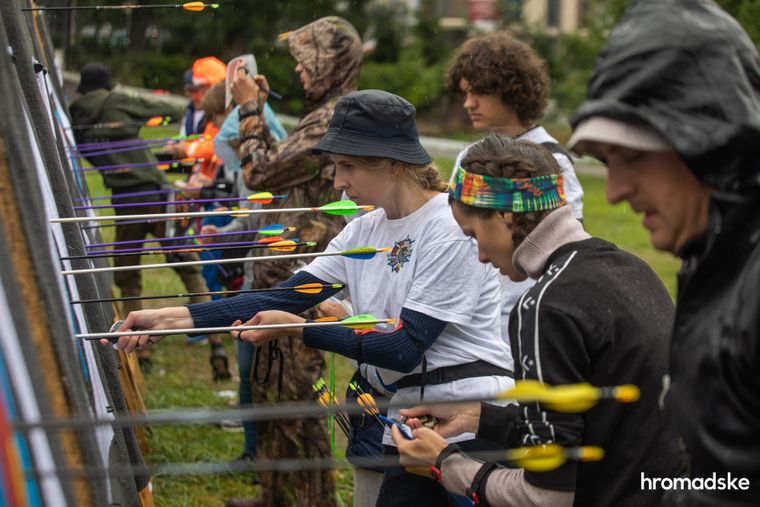 The price of a medal

Athletes, schoolchildren and adults gather in the courtyard of Volyn National University. They are preparing for the city's second archery championship.

Coach Maya Moskvych comes a little later to check whether everyone and everything is in their places. The judges fill in the minutes and the competition begins.

Maya announces everyone's position, closely monitors the shots and counts the scores even before they are announced. There is a noticeable excitement in her looks and restraint. 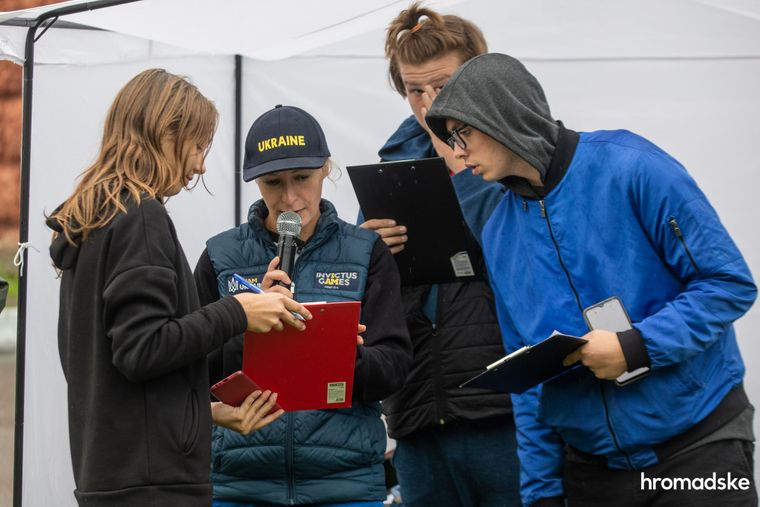 "Nazar is incredible," Maya says. "He has reached this level because he trains twice a day for at least two hours,"

It is reminiscent of her own story. After returning from the front line she trained, worked hard—and in six months received a gold medal for archery at the International Invictus Games.

"I returned from the frontline not of my own volition but for health reasons," Maya explains. "One of the rotations came at a price—I practically lost my hearing. It's a pity, but back then I didn't realize that something was wrong with me. There was no manual saying that if you feel something is wrong, you should seek medical treatment. I became unfit for service, and eventually suffered spinal injuries that prevented me from even holding a machine gun. I don't know how my life would have turned out, if it weren't for the Invictus Games. 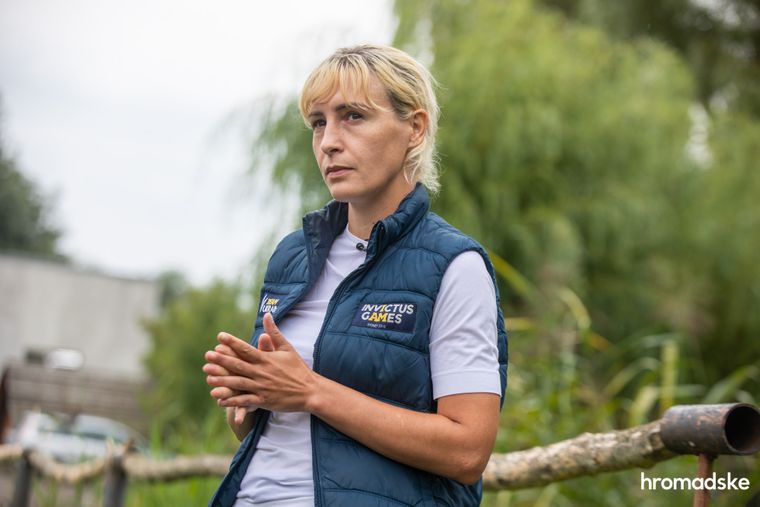 Twice a week she attended training, learned to shoot a bow, and met and talked with other veterans. Soon, Maya went to the competition in Sydney as part of the national team and won gold for Ukraine.

This victory came to the veteran so quickly that she did not even have time to realize what had happened. So she decided to slow down: to come to Lutsk for a while and think about how to live her life further—to spend some time by herself.

She hoped that the regional council would give her a bow worth about $4,000 for winning the Invictus Games, and that she would continue to shoot. But she was told that "they couldn't put it on their books."

Then she decided that if she herself couldn't shoot, she would at least create space for others to practice. 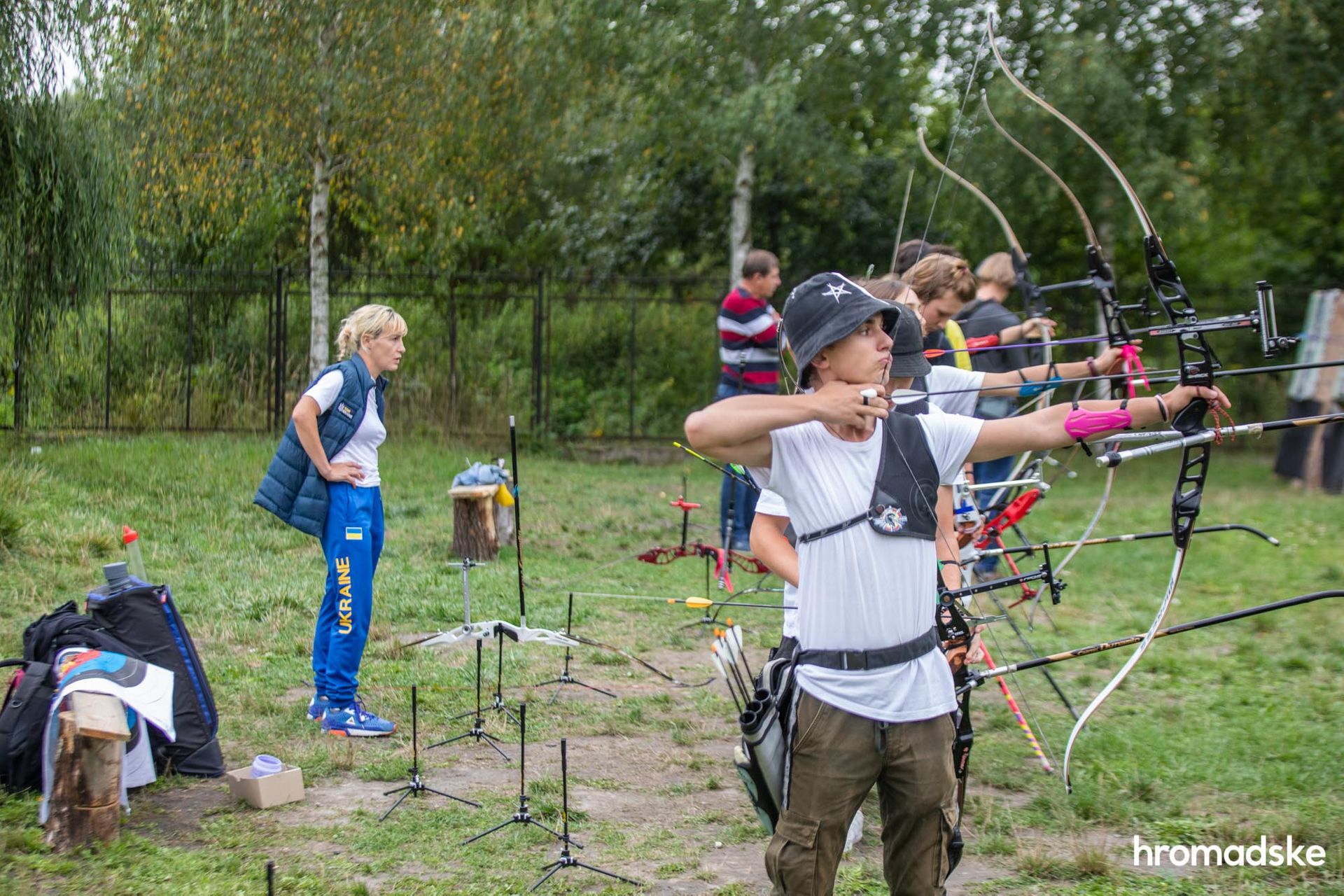 At first, Maya planned that this would be a place to rehabilitate veterans so that they could train and prepare for the Invictus Games like she did.

But later this place became more than just that—children and other civilians started coming to classes.

Maya could not turn them away. Later, people who already knew how to shoot a bow joined, and together they began to develop this sport in the city: they made targets, brought their arrows and the necessary equipment, helped train students, looked for investors and sponsors, applied together for state funding programmes, and won money for the club. Soon, the Lutsk Falcons had their first milestones, championships and victories. Subsequently, the federation was registered. 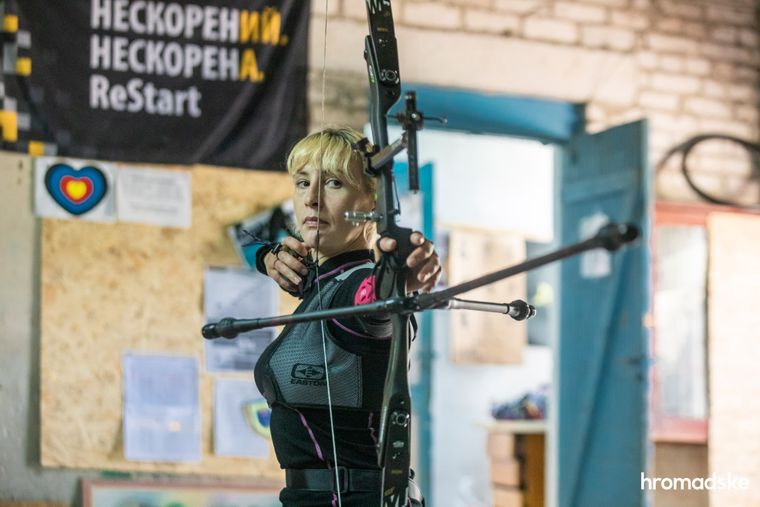 Not all is black and white at the front line

The veteran herself has not shot for two years. She couldn't even pick up someone else's bow—every time she touched it, she could barely hold back her tears. Maya could not believe that despite the gold medal, she still did not have her own equipment. Only recently did the deputies in a local council raise money and buy a bow for Maya.

"Archery gives my life meaning," Maya says, "and it is especially important after the front line—to have something that you continue to do. I went to the front line with the idea that the enemy should be stopped. When I couldn't keep doing it, it was important to find a new purpose."

She went to the front line almost immediately after the Revolution of Dignity.

At first, she was denied a military position because she was a woman. So Maya became a clerk in the battalion named after General Kulchytsky. Later, for "valiant service" she was promoted to a gunner. 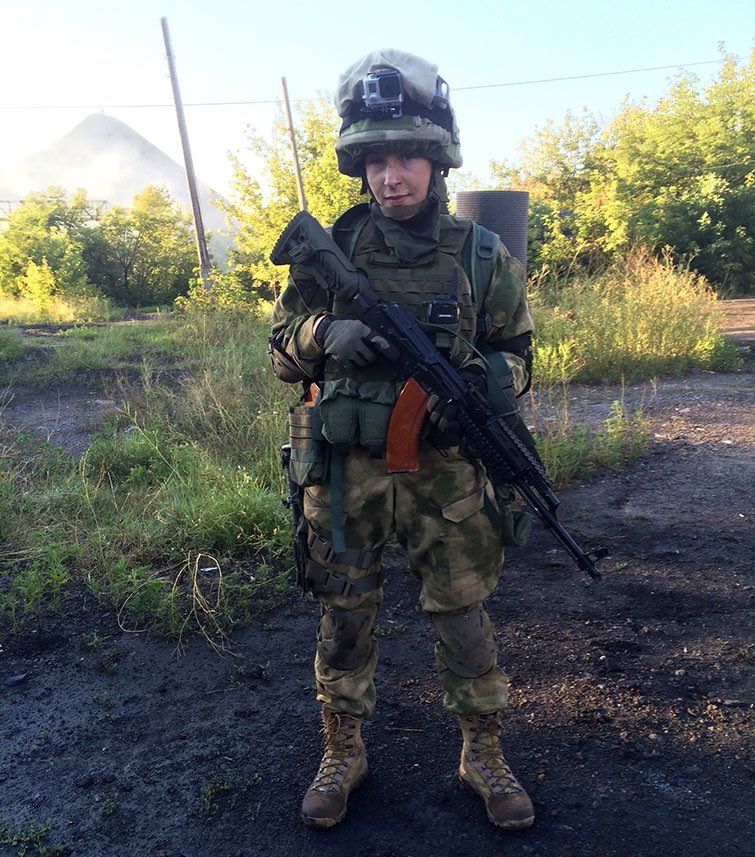 Maya Moskvych at the frontline. Photo provided to hromadske

What Maya saw at the front line did not match her expectations.

"The perfect inner-city girl went and saw real life," the veteran explains. "At the front line, my ideas about life and the world were shattered. It used to be black and white for me; there were good guys and bad guys. Everyone who went to fight for Ukraine was good, those who did not were bad. At the front line, I realized that this was not the case."

Maya was on one side of the barricades on the Maidan, and seemed to be on the other at the front line: both Berkut officers and National Guard soldiers served with her. 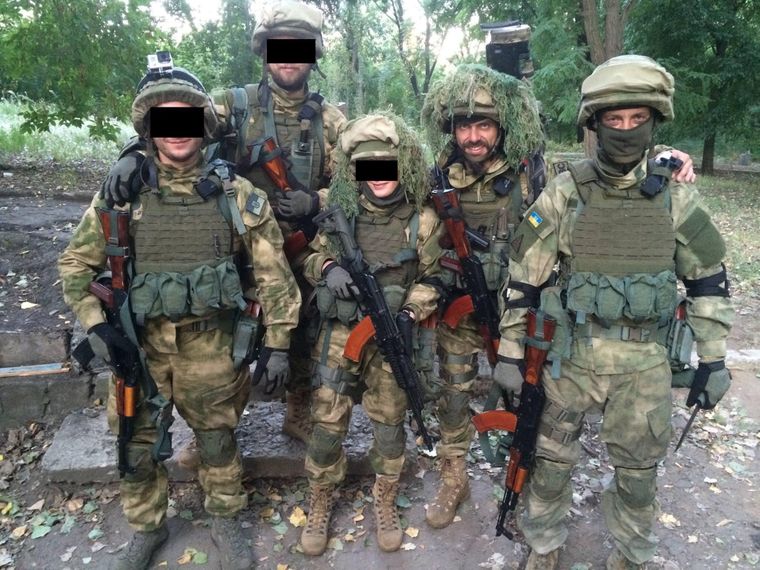 Maya Moskvych (center) together with her comrades-in-arms on the front line. Photo provided to hromadske

For a long time, the fighter did not feel danger, even under shelling. It was only in 2015—when she went on a rotation and was on station with her fellow soldiers at night—that she understood what the front line was.

"We were surrounded, and we had to hold the line," she recalls. "But fear penetrated the body so much that we took turns digging holes with a sapper shovel. I physically wanted to lie below the ground. I understood that I needed to look straight ahead, but if I hadn't dug that hole, I would have worried myself grey."

And a year later, she left the service. During this time, the fighter had had six rotations. She fought and believed that she would return only when she defeated the enemy, when the military would raise Ukrainian flags in all of the occupied territories. 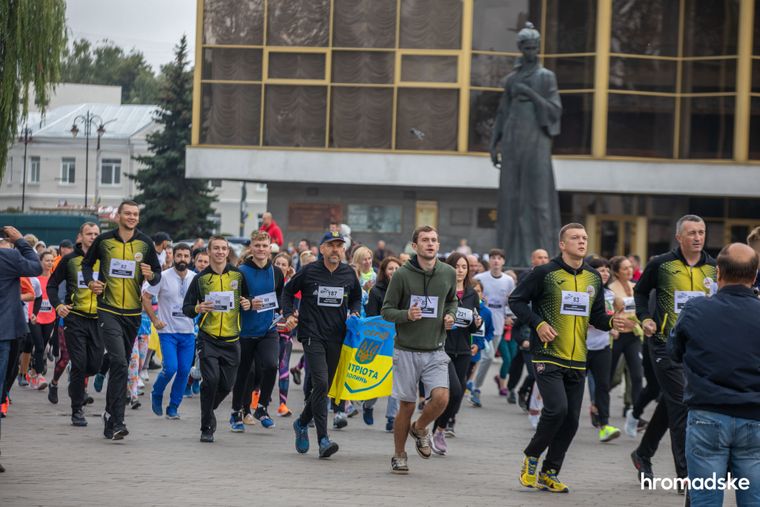 The start of the race in memory of the fallen soldiers in the center of Lutsk. Similar races took place throughout Ukraine on August 28, the anniversary of the Ilovaisk tragedy. Photo: Oleksandr Khomenko / hromadske

On the eve of the competition, people gather in the central square of Lutsk. They changed into their competition gear and warmed up, preparing for a charity race in honor of those killed during the war.

On the other side of the square, near the church, there are fewer people—priests hold a memorial service, and locals come and lay flowers against the wall with photos of fallen soldiers. One of the women gently touches the man's portrait and looks at him for a while.

Maya comes when there is almost no one near the wall. Slowly she walks past and scrutinizes everyone.

She points to portraits of people she knew personally, with whom she was on the Maidan, and recalls how it all began for her.

"We were preparing for the revolution, waiting for this day," Maya recalls. "Almost immediately, we decided that we should go out with tents. I wrote a very pompous message and sent it to all members of the organization: “Brothers, the time has come! Let's go out!" 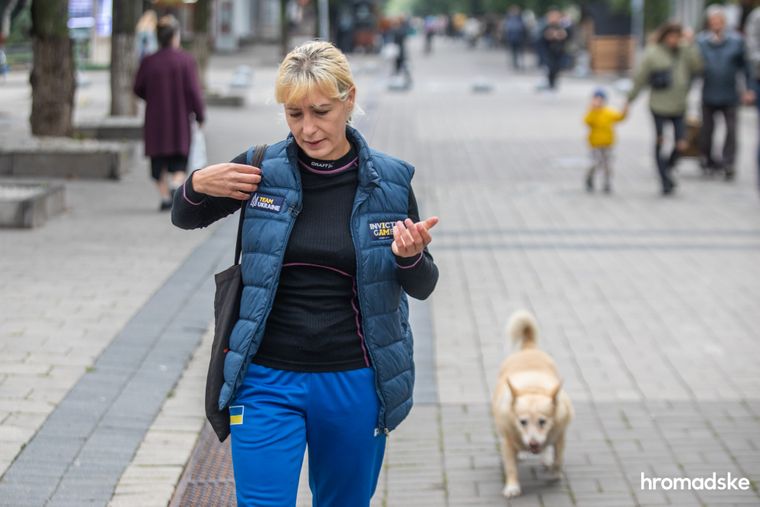 Maya quickly realized that the real revolution was taking place in Kyiv, so she needed to be there. On December 11, 2013, an hour before she was due to leave for the capital, police stormed the organization's headquarters. She was served with a notice of suspicion.

Maya couldn’t sleep for several nights. She worried so much that she fainted, and an ambulance was called to her. She was left in Lutsk on her own – the rest of the activists, her whole team went to Kyiv and had no plans to return, lest they too come under suspicion and face arrests.

READ ALSO: Another Frontline. Kyiv Veteran’s War Is Not Over Yet

Maya thought she was suspected of smashing a monument to Lenin in a village near Lutsk the day before. However, the suspicion concerned something else: she allegedly "cynically and publicly damaged a portrait of Viktor Yanukovych."

She had to wear a GPS ankle monitor, and she was banned from going to Teatralnyi Maidan in her city and participating in rallies. News of her arrest spread throughout the country. Activists staged rallies in support of her, coming out with upside-down portraits of Yanukovych. Later, while watching the video, Maya learned that Serhiy Nihoyan, whom she had never met in person, also went to a rally. 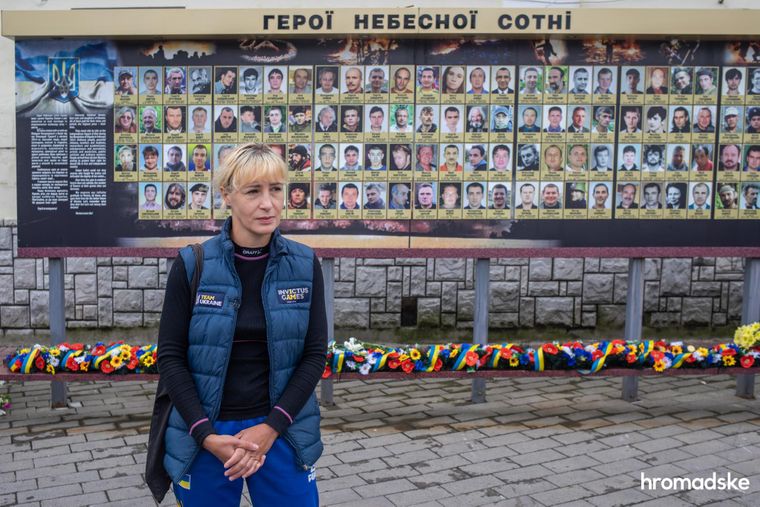 Maya Moskvych listens to the national anthem of Ukraine before the race in memory of the fallen soldiers in the center of Lutsk. Photo: Oleksandr Khomenko / hromadske

Maya finds a portrait of Nihoyan on the memorial wall.

"It's a wall of conscience. When you want to ponder whether you are living righteously or are doing something right, you can come here and look. There are no better guides and feelings. I often went to the Alley of Heroes of the Heavenly Hundred in Kyiv. I came and talked. There were times when I was very ashamed that there was nothing I could do. I went to the front line to win, to liberate us from our enemies. And I returned with nothing, with damaged health. [These martyrs] died, and I survived… But now it's somewhat easy—so I'm doing everything right," Maya says with a smile.

/ The project was implemented with the support of the UN Women Ukraine, the Government of Sweden and the Ministry of Veterans Affairs of Ukraine.

Katrusya Strila: The Granddaughter of the Generalissimo of the Railway Station
5311
Culture