donate
Hromadske UAHromadske RU
AboutWhere to watchAuthors
Contacts
Society
Another Frontline. Kyiv Veteran’s War Is Not Over Yet
15965
Trending
37086

Alina Mykhailova is 26 and has witnessed several wars over these years. It all started with the Revolution of Dignity, when she, then a sophomore in political science at the Taras Shevchenko National University, first went to the Maidan. At first, just out of curiosity, to keep company. But all that changed when force was used against peaceful protesters and Berkut police beat students in central Kyiv.

Her life was never going to be the same. After Maidan, Alina volunteered for the SOS Army. Together with other volunteers, she sent clothes and food for the Ukrainian military to eastern Ukraine, and then found herself there, among them. In 2016, Alina lost a close friend at the frontline, and then decided to go there as a paramedic. Until 2020, she could not imagine herself without army, but later decided to return to civilian life.

But a new struggle awaited her.

During the first year in eastern Ukraine, Alina worked as a paramedic. The girl got there after medical courses from the volunteer battalion "Hospitallers", which she attended with a specific purpose - to go later to the Donbas.

And from the beginning she tried not to succumb to stereotypes about the woman at the frontline:

I tried to show at once: I am here, together with you, I do not want anyone to die, and I want everyone to receive medical care in time. My stay at the frontline is my mission for this country. There should be no gender divide. When you make yourself clear, people realize that 'she's a girl' jokes are out of the question.

She did not need special attention or more comfort:

I never showed that I could not, for example, sleep on the floor in a sleeping bag. I can. This is my choice. The men did not take the liberty to flirt or anything like that, because they knew what my reaction would be. 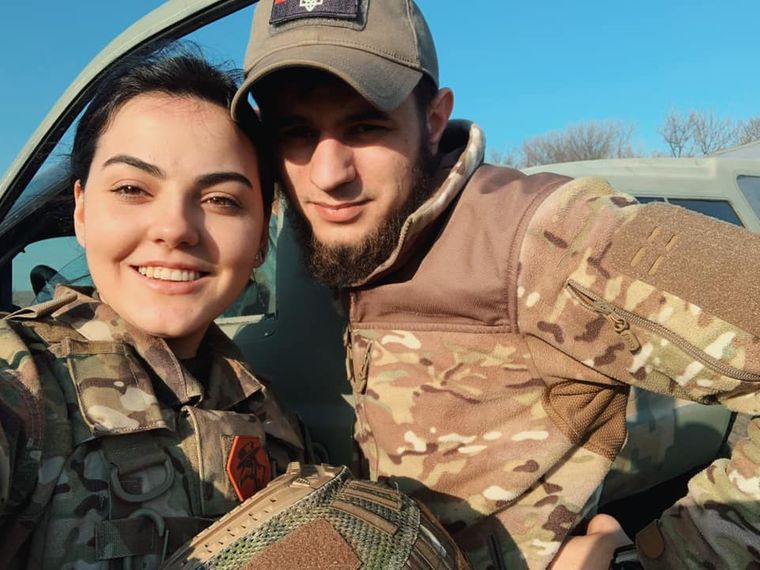 Despite working in the medical field, the girl also wanted to work with guns and mortars, but the commander refused to let her. So Alina decided to act differently - to create an air reconnaissance unit.

"We got unmanned aerial vehicles, helicopters. We decided to gather people so that they could control them, and we could fight more professionally," the fighter says.

Volunteers helped to get the necessary equipment. Alina contacted people, wrote to various organizations that could help, reached out to the diaspora, arranged a fundraiser. Thus three years passed. Alina was at the frontline almost without breaks - only once a month for two days she visited her parents in Dnipro and once a year took a vacation to rest for a week in the mountains. But even there she could not escape the war.

"I came home and couldn't talk about anything but the war. When you're there, you don't care. I felt there in my element, we worked a lot, helped the military. But then new thoughts came to mind: does what I am doing make sense? I gave everything I could, but it seemed that everything remained as it was," Alina recalls.

One of the buddies who watched Alina's condition decided to apply for the Open World program - it gives Ukrainian leaders in various fields the opportunity to meet with American colleagues and share experiences. At first, Alina was skeptical about the offer. She didn't believe she could pass, so she didn't tell either the boyfriend or her parents. Until one day the phone rang. And she was selected.

At that moment, Alina was walking down the corridor of their base. She stopped, cried. The guys ran up: "What happened?"

At first, her family did not believe her, and the girl herself was in shock. However, the trip to America was a breath of fresh air for Alina. She met new people and began to understand what knowledge and skills she lacked. Upon her return, the girl received a scholarship to the Kyiv School of Economics and began working at the Ukrainian Leadership Academy. Alina took her students to eastern Ukraine, to her unit, and told about the military actions in Donbas. This was the first time in the history of the academy that students were trained at a special forces regiment, with the guys who fought at the airport giving them lectures.

"It was still difficult when I came with my students to my unit. I came to my home, to the war, but in a completely different role," Alina recalls.

For her, it was a difficult period when she could not make her mind up whether to stay here or return. Eventually, Alina resigned from the Ukrainian Leadership Academy. 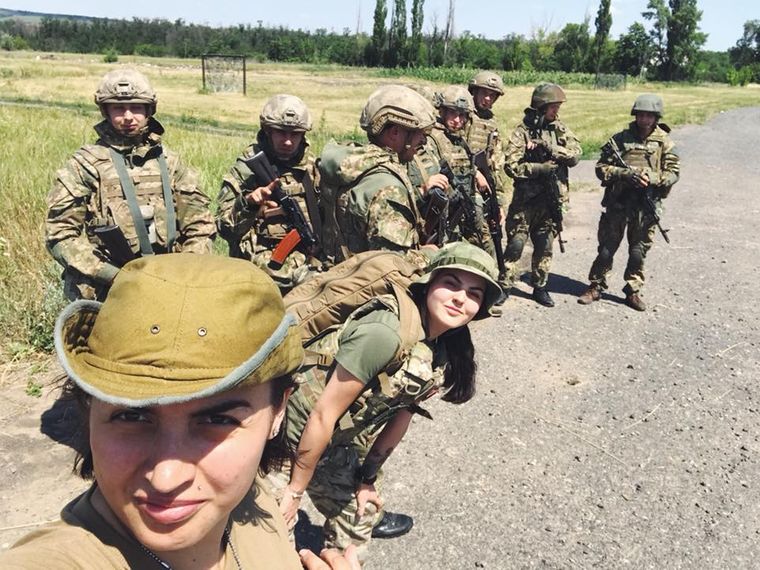 For four months, the girl returned to the frontline, to her unit, but the previous anxiety kicked in soon enough. She blamed herself for giving up and returning to the war, so she decided to look for a job and try to find herself in civilian life again.

Later, Alina started working with a member of parliament. The work was so exhausting that she didn't even have time to ponder anything else. However, constant questions from acquaintances "When will you return?" got the best of her.

Then the girl started avoiding communication with acquaintances, worked a lot and spent time at home. However, in the end, she decided to seek help from psychologists who have experience working with veterans. For about six months, she worked with two psychologists - one she visited in person, and with the other she worked online.

"It was a long journey for me. I don't know how, but after a while, I was set free," the girl says.

People around her often think that it was easy for her to return from the war, but only Alina herself knows how it really is.

"Recently, at one of the public events, an acquaintance of mine said, 'Alina is a shining example of a person who has returned without consequences.' However, this is not the case. Just because I didn't show it to anyone doesn't mean I took it easy. I worked for days on end and only dreamed of coming home and going to bed so that no one would bother me," the girl says.

She knows firsthand what an assassination attempt is. In 2017, Alina's commander went to the rear to pick up fighters from the train at the position in her official car. On the way, the car was fired on twice. It remains unknown who it was to this day.

The memory of the sudden deaths of those around you is often felt.

"It is difficult to witness constant losses. A fighter died in my unit: in the morning you drink tea with him, and then he doesn't come back. When you constantly live among this - you do change," says Alina. 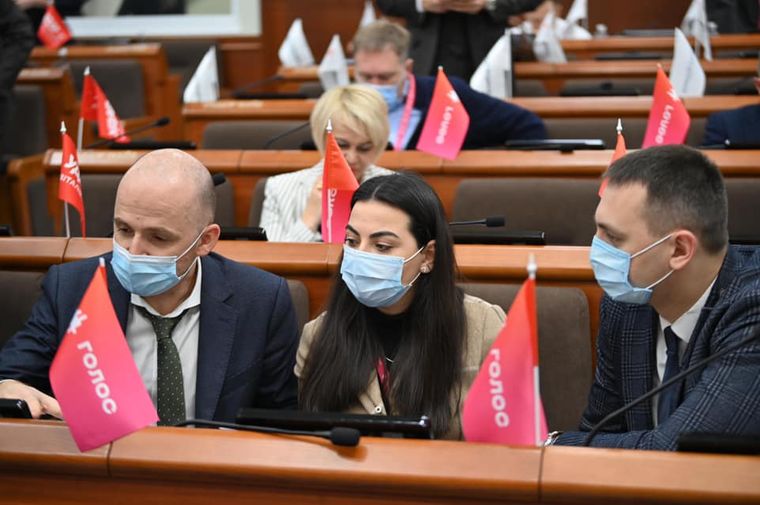 Alina has been a deputy of the Kyiv City Council for a year now. For some of her acquaintances, this step seemed a surprise, but for the girl herself, everything is logical and obvious. She has a master's degree in political science and a second degree in public administration. Alina chose her specialty at school and now realizes herself as a politician. Deputy work, volunteering, the Maidan, and war share one common purpose in her eyes: the creation of changes despite obstacles.

Last year, during the election campaign, she heard skeptical accusations: oh, a girl, come on, so young! She approached such people, told about herself, explained what she wanted to do, and persuaded them. Of course, in her opinion, there are many prejudices in society about women in politics, but little by little they can be overcome - at least by example and action.

And it did work. People entrusted her their votes, so for six months now Alina has been representing their interests. 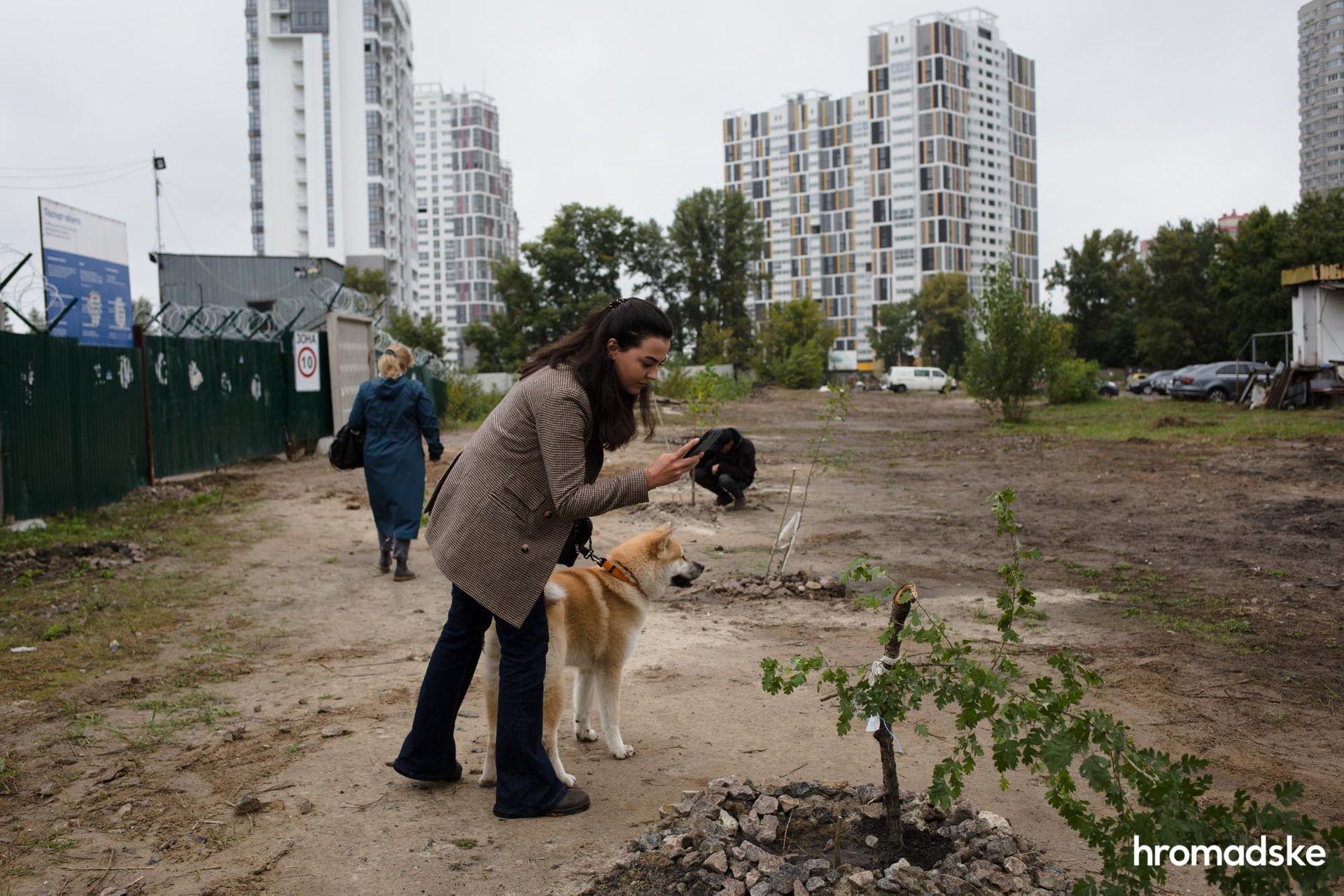 The girl is involved with the problem of illegal developments, helping local residents deal with people who organize construction on municipal territories, defending the rights of the community. She went to the polls with a different program: work with youth and veterans, culture, and so on. But, according to her, when she saw that most of the issues voted for by deputies concern land and construction, she decided to delve into this topic.

"I am not someone from this sphere, but it couldn’t be any other way. If a city is being built and the community is being attacked by developers, how can this be ignored?" Alina explains.

Now her phone is full of various documents about buildings and land in Kyiv, cadastral numbers, etc. And friends rarely invite her for a walk in the center, because it can always end in finding out whether some cafe had permission to build a patio up to the roadway. Alina's watchful eye notices when such capture of the territory interferes with pedestrians. Colleagues, according to her, are angry that sometimes the girl refuses to go somewhere with them. But Alina stands her ground.

According to the girl, her military past sometimes affects her work and how her colleagues perceive her: "When I show emotion - even in the Kyiv City Council or at meetings - my colleagues say: 'Yes, she was at war, that explains everything.' But I've always been like that, it doesn't derive from my experience at the frontline," says Alina. 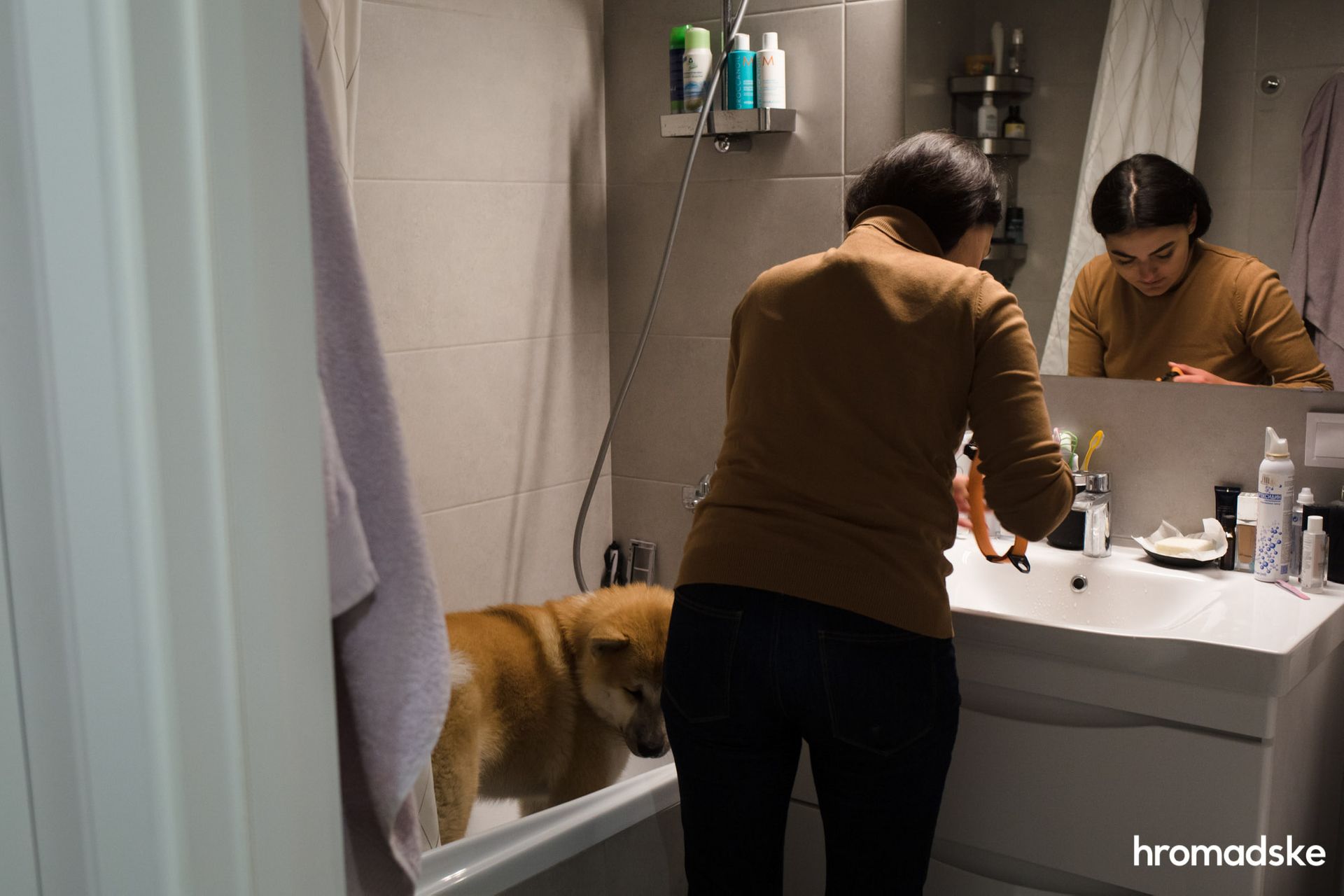 The work of a deputy in the Kyiv City Council is a volunteer job, for which Alina does not receive a salary. The girl says that deputy work takes up most of her time: sometimes she doesn't even have time to eat and is constantly on the road, because meetings with the community (and visits to illegal construction sites) are in different parts of Kyiv.

This year, Alina transferred to study at the Ukrainian Catholic University, so she has to be in Lviv four days a month. Besides, the girl does shifts as a social media manager, for which she receives about $600-700 a month. This covers basic expenses, while parents help with the rest.

"It's easy to say: 'We don't get paid, our work ends in the voting hall’, but deputy work goes beyond that. This is about coming to the community at midnight to install blocks so that the developer could not bring equipment to the communal territory. I don’t have to do that, but if I [made a conscious decision to become] a deputy and I feel my responsibility to the people who voted for me, I will do just that," says Alina.

According to her, at times she still wonders: shouldn't she go back to the war and return only for Kyiv City Council sessions? However, the girl is already taking root in Kyiv.

"I went to study in Lviv for a few days, and people ask, 'Where did you go, we didn't see you, we thought you had already left us.' I can't abandon this anymore - my conscience and responsibility won't allow me to."

Alina gives the impression of a person who devotes herself to any work, no matter what she does: whether it is medical care for wounded soldiers, work with students, or the war with illegal construction in Kyiv. She considers her activities in the City Council difficult, as her colleagues often lobby their own interests and vote for decisions that are beneficial to them. But the girl thinks: the main thing is to position yourself correctly and stand your ground, despite all the challenges:

The fact that you are a girl should not limit you at all. When you love your job, when you show people the real results of your work, they eventually start appreciating you for it.

/ The project was implemented with the support of UN Women Ukraine, the Government of Sweden and the Ministry of Veterans Affairs of Ukraine.

Maya the Warrior. Donbas Veteran Takes Up and Popularizes Archery