The evidence was received from Lev Parnas, an American businessman of Ukrainian descent associated with Trump’s personal lawyer Rudolph Giuliani. It outlines new facts about pressure on U.S. Ambassador to Ukraine Marie Yovanovitch and attempts by Giuliani to meet with the President of Ukraine.

The Committee's website reported that this evidence has already been transferred to the Senate, where Trump's impeachment should be considered in the near future.

Records of telephone calls and copies of correspondence provided by Lev Parnas are among the materials submitted to the Intelligence Committee. Some of them contain personal information and will therefore not be disclosed.

In particular, Parnas provided handwritten notes made on stationery from the Ritz-Carlton Hotel in Vienna, which contained the following words: "get Zalensky [sic] to Annonce [sic] that the Biden case will be Investigated", "start commun [icating] with Zalensky [sic] without (Pinchuk or Kolomoisky)".

It also mentions the so-called "black ledger" of the Party of Regions and Lanny Davis, an American lobbyist and political consultant who supported Hillary Clinton and represented the interests of Michael Cohen, an ex-lawyer of Trump’s who was convicted in the United States of perjury. One of the notes reads: "get rid of Lanny Davis (nicely)." 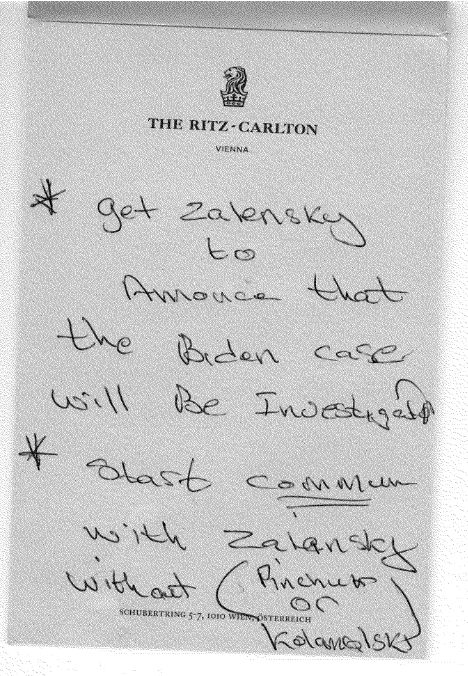 One of the notes contained in the materials submitted by the Intelligence Committee. Photo: U.S. House Permanent Select Committee on Intelligence 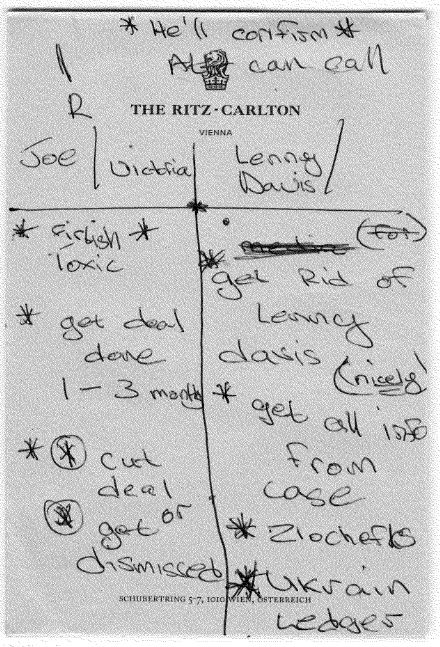 One of the notes contained in the materials submitted by the Intelligence Committee. Photo: U.S. House Permanent Select Committee on Intelligence

The materials also include a copy of the letter sent by President of Ukraine Volodymyr Zelenskyyy on 10 May 2019 to Giuliani. Therein, Trump's personal lawyer, "as an individual and not the President of the United States," asked Zelenskyy to meet on May 13-14. The meeting was expected to be also be attended by Victoria Toensing, an American lawyer who worked for Trump's team during the investigation of Special Prosecutor Mueller.

Among the recipients of the letter was Arsen Avakov, Minister of Internal Affairs of Ukraine. On May 11, Parnas sent a copy of the letter to a “Sergy” -- it follows from the context that this could be the assistant to the Ukrainian president Serhiy Shefir. One of the text messages shows the contact details of this person as "Sergy Sheafer (zalintsky)". 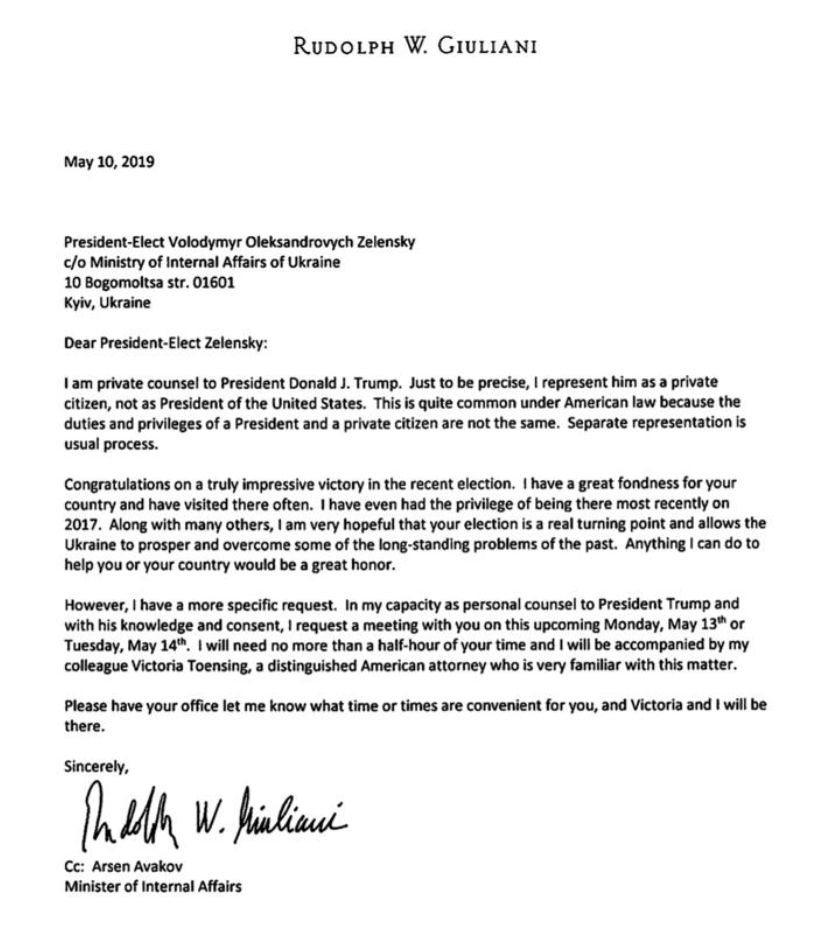 Copy of Rudolph Giuliani's letter to Volodymyr Zelenskyy, sent on May 10, 2019. The text of the letter was also sent to Arsen Avakov, Minister of Internal Affairs of Ukraine. Photo: U.S. House Permanent Select Committee on Intelligence.

The leaked documents contain a number of text messages between Parnas and Robert Hyde, a Republican candidate for Congress who was not previously mentioned in the context of Trump's impeachment. According to reports, Hyde organized around-the-clock (possibly phone and computer) monitoring of the U.S. Ambassador to Ukraine, Marie Yovanovitch, when she was still in Kyiv. He repeatedly referred to her using obscene language. 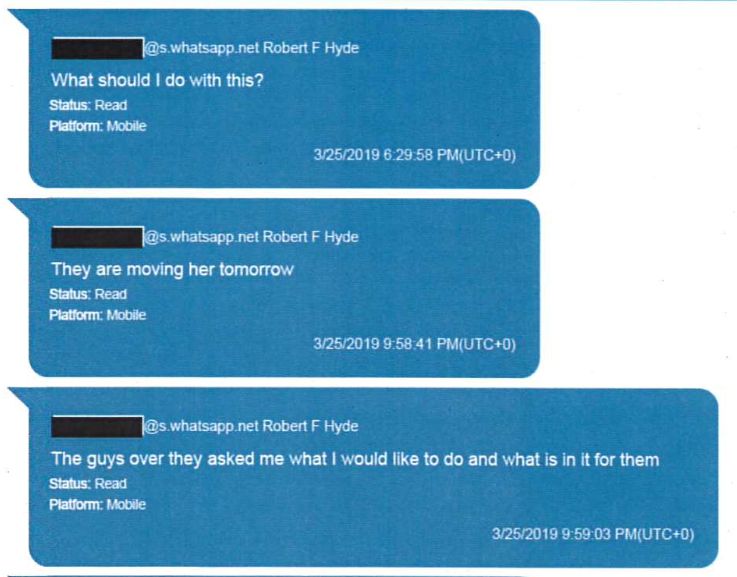 Copies of Parnas’ text messages indicate that he maintained contact with many participants in the Trump impeachment story. Apart from Giuliani, he corresponded with Ivan Bakanov, the head of the Security Service of Ukraine; ex-prosecutors general of Ukraine Viktor Shokin and Yuriy Lutsenko; Minister of Internal Affairs of Ukraine Arsen Avakov; Zelenskyy's aide Andriy Yermak; and oligarch Ihor Kolomoisky.

Through them, he sought to organize a meeting for Trump's personal lawyer with Zelenskyy.

Among other things, Lutsenko in his messages criticized Yovanovitch and called her a "fool." Parnas, in turn, assured Lutsenko that he was considered "the real hero of Ukraine" in the United States. 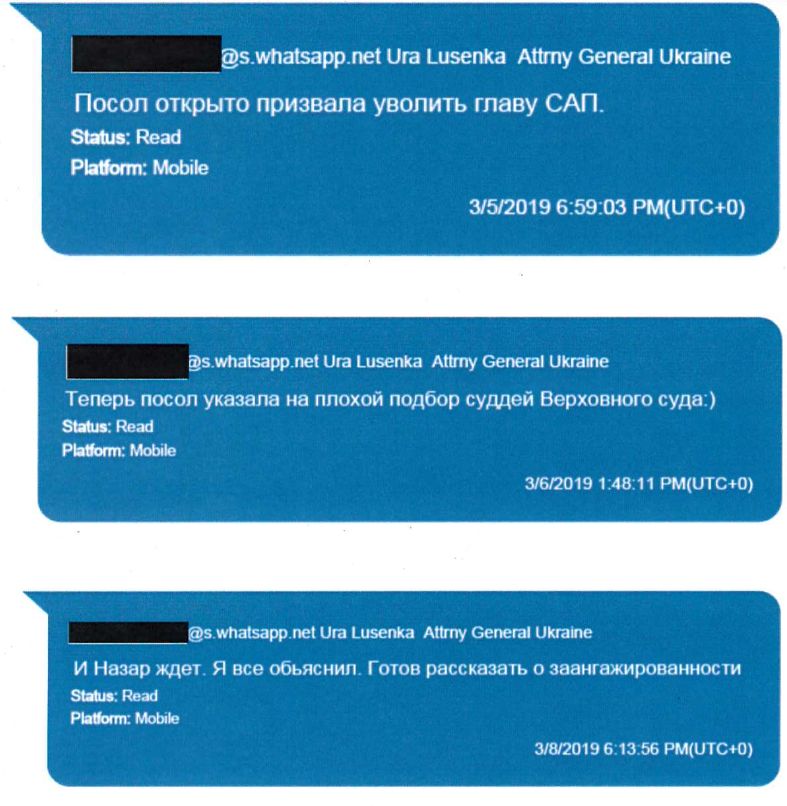 Parnas’ lawyer Joseph Bondy has already confirmed that his client is ready to testify in the Trump impeachment case.

HPSCI has just transmitted evidence from Lev Parnas to the Judiciary Committee, which it deemed relevant to @POTUS’ impeachment inquiry. Mr. Parnas remains committed to testifying as to all the actions he took in Ukraine on behalf of @realDonaldTrump. #LetLevSpeak #LevRemembers pic.twitter.com/udaua1zwPj

It became known that the House Intelligence Committee investigating the impeachment of President Donald Trump received audio, video and photo material from an American businessman of Ukrainian descent, Parnas who is associated with Trump's personal lawyer Giuliani in late November 2019.

In early September 2019, a White House informant lodged a complaint with Congress alleging that Trump, during a conversation with President of Ukraine Zelenskyy in July 2019 allegedly demanded an investigation into the case of Burisma, whose board included Hunter Biden, the son of Trump’s rival in the 2020 election, Democrat Joe Biden.

The Congress has begun investigations into possible attempts by Trump and his lawyer Giuliani, to push Ukrainian authorities.

On September 24, the House of Representatives launched Trump's impeachment procedure. Trump admitted that he had mentioned Biden during the interview with Zelenskyy, but said he did not put pressure on the President of Ukraine.

On September 25, the White House released a transcript of a July conversation between Trump and Zelenskyy wherein Trump asks Zelenskyy to "do him a favor" and "deal with the matter," to which Zelenskyy says that the next prosecutor general will be "100% his man."

On November 13-21, public hearings on the Trump impeachment proceeded with the House of Representatives.

On December 3, the Intelligence Committee released a report outlining two major allegations against the U.S. president: abuse of power and obstruction of Congress. Following this, the impeachment investigation was transferred to the House Judiciary Committee.

Late on the evening of December 18, the lower house of the U.S. parliament, the House of Representatives, after more than 11 hours of deliberation, voted in favor of the impeachment of U.S. President Trump. Thus, he goes down in American history as only the third president to be impeached.

Now the question of the removal of the 45th president from the post should be considered by the U.S. Senate. But since the removal requires two-thirds of the vote and the Senate majority belongs to Republicans, Trump is likely to retain his seat.

The Sunday Show: How Did the New Government Look?
3082
Society