Long Live Folk! How Folk Music Is Preserved in Ukraine
13911

Why I Joined Hromadske
Editors' Choice
7344

Will Ukraine Get Its Own Unified Orthodox Church?
30476

Ukrainian President Volodymyr Zelenskyy (C) during a memorial event for Victory in Europe Day in Milove, Luhansk region, Ukraine on May 8. Office of the President of Ukraine

On Victory in Europe Day, Ukrainian President Volodymyr Zelenskyy visited the Luhansk region. He visited a town where the liberation of Ukraine from Nazis forces in 1942 began, and spoke to families whose homes were seized by occupying forces in September 2018.

The Place Where the Expulsion of the Nazis Began

The president recorded his Victory Day address from the town of Milove in the Luhansk region.

“Not far from this place is the village of Pivnevka, which was the first inhabited point where, in December 1942, the expulsion of Nazi invaders from Ukrainian land began,” stated the president in his address.

Zelenskyy was first going to visit that village, but it turned out that it simply didn’t have the space. But in Milove – the district capital, twenty kilometers west of the village – there was a big memorial complex called ‘Ukraine – Liberators’. It’s not in the best shape, which is why Zelenskyy promised to “complete repairs and construction” there.

The second theme of the president’s speech became the construction of a road between the cities of Severdonetsk and Stanytsia Luhanska. Zelenskyy assigned this task to Serhiy Khaydaiyu, the head of the Luhansk regional administration, in November 2019. At the time, he had only been in that position for a little under a month.

“Over the winter we’ll draw up the documents and we’ll be able to make a road that’s a little better than in Mariupol,” said Khaydaiyu at the time.

Plans for road construction in the Luhansk region wait for the president on the road between Severodonetsk and Stanytsia Luhanska, May 8, 2020. Because of strong winds, Zelenskyy was able to see only one of the two banners. Photo: Ivan Buhtiyarov / hromadske

A repaired section of road on the Severodonetsk-Stanytsia Luhanska highway, Luhansk region, May 8, 2020. After the current ongoing raptors, the road will be raised by 30 centimeters. Photo: Office of the President

On his return trip to the area on Victory Day, the president visited the village of Novoaidar. A National Police checkpoint had been in place there from the start of the conflict until May 2018.

“Are you waiting for the president? Would you like to tell him something?” I ask a young girl who’d left a nearby house along with her younger brothers.

“Tell him?” the girl replied, bemused. “Nothing. I would like to see him. I’m proud of him. No one’s done as much for our country as Zelenskyy has.”

“I don’t know. A lot of things, I don’t know what’s the most important.”

“Has anything changed in your life?”

“So far nothing...but I believe that it will change.”

“That’s Why We’re All In Masks”

The president, walking with his chief-of-staff Andriy Yermak on the right and Khaidaiyu on the left, headed for the banner. It visualized the “biggest construction projects” in the Luhansk region. The banner had explanations of future planned projects, like seven new schools, 4 new kindergartens, five admitting hospitals, and 66 kilometers of road. Ten minute before the president arrived, there were two of them. The second one (lost to the strong winds that day), spoke about an “ambitious plan” to build 193 kilometers of roads (the difference between the 66 km on the other banner and this plan wasn’t really explained). And there was a project to build another 176km with help from the International Bank for Reconstruction and Development.

Zelenskyy, Yermak, and Khaidaiyu discussed the complicated logistics of road construction for a moment, then headed to the gaggle of waiting press.

“Honored journalists. I think that you may have trouble hearing us because of the masks. Or you can hear us? Not very well? I can take it off. I’ve been checked, don’t worry,” said Zelenskyy.

“But we haven’t been,” replied a photographer.

“That’s why we’re all in masks,” Zelenskyy responded without missing a beat. 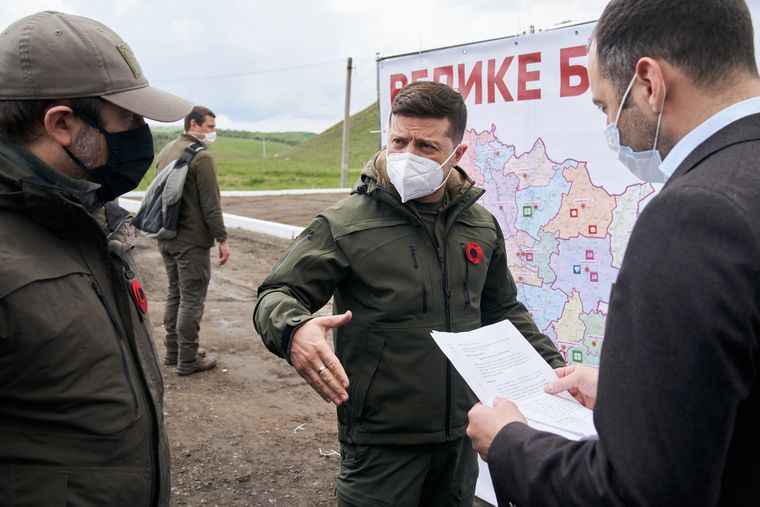 Ukrainian president Volodymyr Zelenskyy (center) near a banner showing plans of road construction in the Luhansk region, May 8, 2020. Photo: Office of the President

“That Side” VS Temporarily Occupied Territories

After a quick reminder about the meaning of Victory Day here (though he named Milove as the first liberated Ukrainian village, not Pivnevka), the president switched topics to talk about road constructions: “This road is very important for people who live in Ukraine – on our side, and on the other...on the temporarily occupied territories.”

Zelenskyy clearly wanted to say “that side” – that being the phrase most commonly used by residents of the Luhansk and Donetsk regions when talking about the occupied territories. But quickly fixed it.

“Four, five – we believe that [this year we’ll build] five thousand kilometers of roads,” the president continued, rounding up. 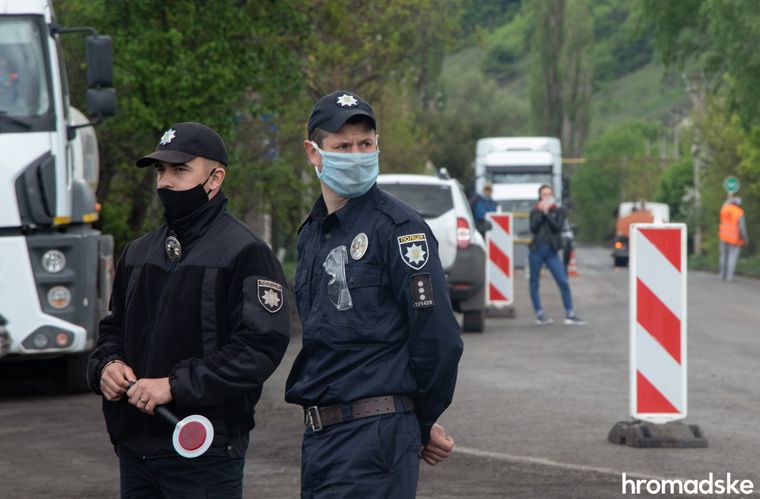 Police and journalists wait for President Zelenskyy on the Severodonetsk-Stanytsia Luhanska highway in the Luhansk region, May 8, 2020. Two years ago, on exactly this spot, a National Police checkpoint stood. Photo: Ivan Buhtiyarov / hromadske

Apartments instead of houses in Zolote

The third topic of the president’s speech involved the front-line town of Zolote. There, he was supposed to graciously give apartments to people who had to leave their homes because of the conflict. These families lived in the real ‘gray zone’ – part of the village of Zolote-4, which is neither under government nor occupying control. Once, in September 2018, the Ukrainian Armed Forces were able to take back a large part of the villages in the area. In military reports, this area is called Khutor Volny (derived from local names of the area and the name of the main street of the village – Second Freedom.) A smaller part of these villages, separated from the main body by a beam, was occupied by invading fighters who’d forced several families to leave their homes. Zelenskyy promised them housing during a previous visit.

At first, journalists were allowed to choose what to record – the president’s inspection of the roads or the giving of keys to renovated apartments to several internally displaced families. Almost everyone chose to record the latter. But then the President’s administration changed their minds, and Zelenskyy went to Zolote without any press.

“We’ll now go to Stanytsia Luhanska – we promised people who’d been left without homes there that we’ll fix and give them an apartment. We promised 15 apartments – 10 have already been completed,” said the president.

But in that statement, the president confused Zolote and Stanytsia Luhanska, but no one risked correcting him this time.