EXCLUSIVE: The True Cost Of Remaining Ukrainian in Crimea
8897

EU leaders and President of Ukraine Volodymyr Zelensky Photo: Office of the President

French President Emmanuel Macron, German Chancellor Olaf Scholz and Italian Prime Minister Mario Draghi arrived in Ukraine together. They were also joined by Romanian President Klaus Iohannis. After a brief visit to the suburb of Irpin, the leaders met with President of Ukraine Volodymyr Zelensky in Kyiv.

"This is an important moment. This is a message of unity to Ukrainians," said French President Emmanuel Macron after arriving in Kyiv by night train, Reuters reports.

He praised the heroism of Ukrainians after his visit to war-torn Irpin.

"We have all seen the devastation of the hero city. It was here, among other things, that the Ukrainians stopped the Russian army marching on Kyiv. We stand unequivocally with Ukrainian men and women," the French president added, as quoted by Le Monde.

"We will rebuild everything"

"We will rebuild everything. The Russians destroyed kindergartens and playgrounds. Everything will be restored," Italian Prime Minister Mario Draghi told reporters after a walk through the ruined streets of Irpin with Emmanuel Macron, Olaf Scholz and Klaus Johannis.

"Russia is ready to destroy"

After visiting Irpin, the German Chancellor said that Russia's actions in the war against Ukraine were aimed only at destruction.

"It says a lot about Russia's aggressive war, which is simply aimed at destruction. We need to keep this in mind when making decisions. I wonder what kind of destruction this war is causing. And it's even worse when you see how senseless this violence is," the German leader was quoted as saying by Bild. 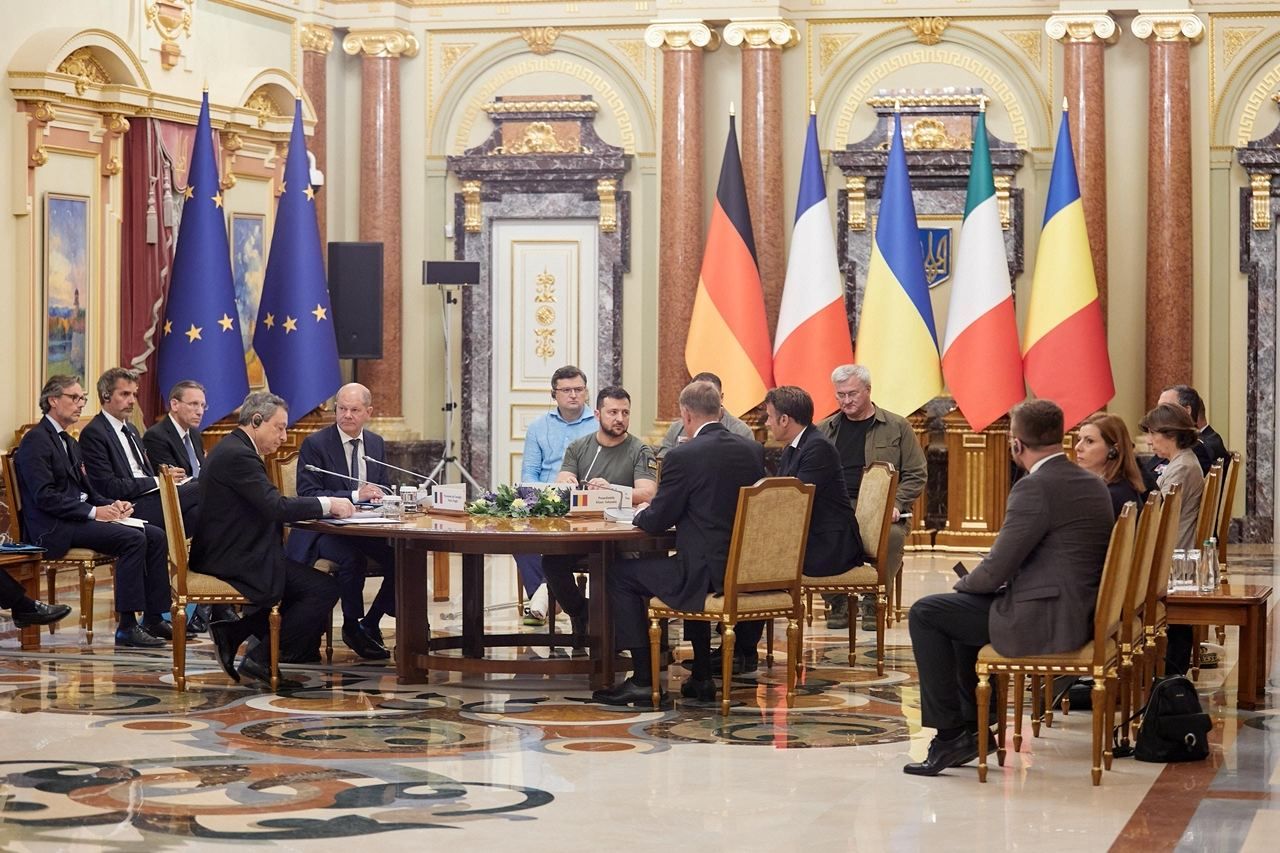 Meeting of leaders of countries
Photo: Office of the President

Rapprochement of Ukraine with the EU

Ukraine has already completed and submitted a questionnaire to the European Commission to help the EU decide whether the country should become a candidate for accession. The Commission must then provide its opinion and refer the questionnaire to the European Council. Once approved, Ukraine will receive candidate status and start EU accession talks.

At the same time, the leaders of France, Germany and Austria said that Ukraine's accession to the EU could take years and suggested organizing other forms of cooperation.

Ukraine insists on EU membership. On June 6, President Volodymyr Zelensky reiterated that Ukraine was not considering an alternative to membership in the European Union. Representatives of the European Council will discuss granting Ukraine the EU candidate status during the summit on June 23-24.

Negotiations on accession among current EU members have progressed differently. For example, Sweden applied in 1991 and became a member in 1995. On the other hand, Turkey applied in 1987, but has not yet joined the bloc.