“We wanted to try leaving people in Ukraine, and tried our hardest for it. Ukraine is also full of work,” stated Ukrainian Prime Minister Denys Shmyhal during an April 22 interview. “It doesn’t look logical to organize massive charter flights right now to take Ukrainians to countries that are still undergoing the epidemic,” said Foreign Minister Dmytro Kuleba during an April 28 interview. The government is actively working to promulgate the idea that Ukrainian migrant workers will not be able to leave the country in the near future – regardless of their personal feelings and of the interests of employers. But how legal, realistic, and economic is it?

European farmers are worried: the harvest season is drawing near, but there’s no one to pick the produce. Due to the coronavirus epidemic, quarantine, and closed borders, seasonal workers, mostly from Eastern European countries, cannot come for work. In the U.K, France, and Germany, various methods were used to try and attract local students and unemployed residents to pick strawberries and asparagus, but few answered the call.

E.U. member states – even those who earlier weren’t favorably disposed towards migrants – are now organizing special flights for migrant workers: Germany, Austria, and the U.K. has never welcomed migrants from Romania and Bulgaria so fervently.

There’s no ban on leaving, but there aren’t any flights either

Ukrainians have been travelling to Europe for work for decades. For many of them, a few months of work in the fields in European countries allowed them to feed their families at home for the rest of the year.

Ksanii Aksaniya from the western Ukrainian city of Zaporizhzhya has been travelling to Finland a few years in a row to pick strawberries. She also owns her own labor agency, and as a middleman, helps organize work trips abroad for other Ukrainians. At the moment, she, and several hundred other Ukrainians, don’t know whether they’ll be allowed to fly to Finland this summer – seeing as the Ukrainian authorities have not authorized any charter flights, which local employers had planned to use to ferry workers.

At the start of April, Finland addressed the Ukrainian Foreign Ministry, asking for Ukraine’s assistance in ferrying around 1,000 workers from Ukraine for agricultural work in Finland. Helsinki promised to pay for these chartered flights, and to provide a two-week quarantine for the workers on their arrival.

Foreign Minister Kuleba in mid-April stated that Ukraine has received many similar offers from employers in different European countries, but that it hasn’t made a final decision. But, near the end of the month, it’s become clear that the Ukrainian government doesn’t want to let Ukrainian migrant workers across the border.

Only one Ukrainian flight, out of 200, landed in Finland, and the Finnish authorities aren’t banking on there being any more following statements from Ukrainian authorities.

“Finnish employers are telling us that after the first plane, the Ukrainian authorities changed their tune,” says Aksaniya. “And now instead of Ukrainians, they’re looking for seasonal workers from Thailand.” 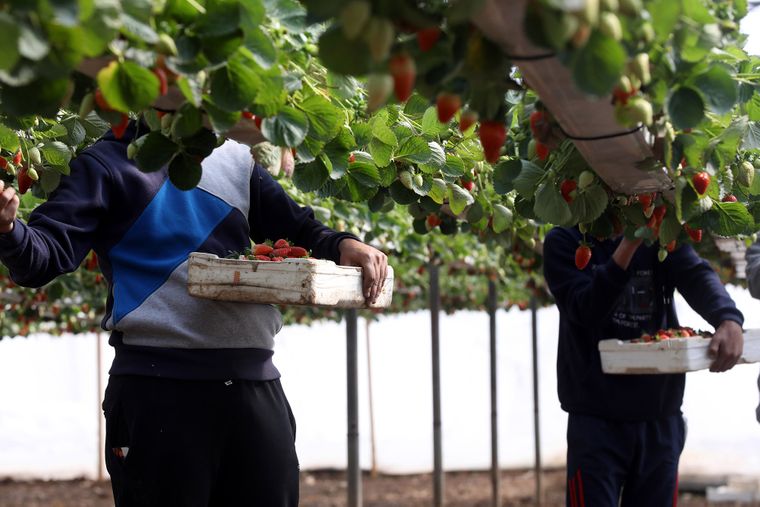 Finland, which has seen years of Ukrainian migrant workers arrive for seasonal work, particularly to gather strawberries, offered to pay for charter flights and organize a two-week quarantine on arrival, but the Ukrainian government has not agreed. Photo: EPA-EFE / ALAA BADARNEH

Hromadske was unable to find any existing official document that would limit the rights of Ukrainians to work abroad, either from the Foreign Ministry’s press service or the Cabinet of Ministers. But the Cabinet’s press service does not rule out such a decision being made in upcoming sessions.

“There’s not a single document that would additionally restrict the departure of workers across the border,” stated Viktoria Poda, press secretary for the Prime Minister, in a comment to hromadske. "But Ukraine has limited air flights for the quarantine period. That’s why every charter that leaves Ukraine needs to receive special dispensation for this.”

These dispensations, according to the press secretary, are handed out by a specialized working group in the Cabinet. That is, regardless of any official restriction on leaving, Ukrainians do not have the ability to fly out on charter flights organized by foreign employers – because the government isn’t allowing it.

After our conversation, a message appeared on the government’s website, stating that the authorities will be giving “pointed” dispensation to leave Ukraine according to foreign employer requests – if those foreign employers will be able to provide proper living, working, and medical conditions.

Government spokespeople explain that the restrictions on Ukrainians traveling for work is just concern for their health.

“The government of Ukraine is guided, most of all, by safety and health considerations for our citizens. During the conditions of the spread of the pandemic, any travel is exposure to the risks of the disease, especially when this travel is done by plane,” said Foreign Minister Kuleba. He had earlier explained that seasonal work is very short-term, for a duration of a month or two, and then the seasonal workers will return home. And this can lead to a new wave of disease in Ukraine.

As the experience of neighboring Romania has shown, the organization of charter flights is indeed tied to higher health risks. At the start of April, photos were published in the media showing crowds of people in the Cluj city airport – over 200 people, crammed against each other, waiting for flights for seasonal workers.

Romanian authorities had decided to make an exception for migrant charters, and agreed to requests from German and British farmers. Unlike his Ukrainian counterpart, Romanian Prime Minister Ludovic Orban acknowledged that the country is bound to provide work for all of its citizens. Hundreds of people travelled to the airport in buses from every corner of Romania, including from the Romanian coronavirus epicenter of Suceava – which is on the border with the Ukrainian epicenter of the Chernivtsi region. But after these photos, as well as information about the death of a Romanian migrant worker from coronavirus in Germany, the Romanian government was blamed for not valuing the health of its citizens.

It seems like the Ukrainian authorities are attempting to avoid this scenario by limiting the departure of seasonal workers. 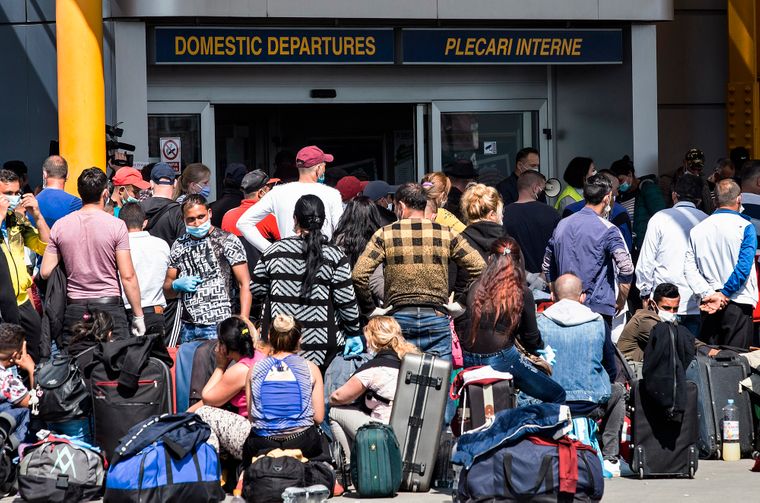 Romanian citizens wait for special charter flights to Germany at the Avram Iancu International Airport in Cluj-Napoca, southwest of Bucharest, Romania. April 10, 2020. The German authorities decided to allow seasonal workers into the country due to the lack of willing workers to gather the harvests, particularly of strawberries and asparagus. Photo: EPA-EFE / MANASES SANDOR

But politicians' statements about Ukrainians needing to stay in Ukraine has caused concern among human rights defenders.

The government doesn’t have the legal basis to forbid Ukrainians from crossing the border, they argue, as that’s a violation of Article 33 of the Ukrainian Constitution, which guarantees the right to freedom of movement and the right to leave the territory of Ukraine.

“This right, in principle, cannot be restricted by a Cabinet decision (which formally doesn’t exist – ed.), only by law – meaning a decision by Parliament,” points out Volodymyr Yavorskiy, a human rights defender and a member of the Ukrainian Helsinki Human Rights Union. “The government can set restrictions on entering, seeing as that entails certain risks for citizens. But there cannot be any restrictions on leaving, seeing as that doesn’t pose any risks for the country and its citizens. But on their return, the government can implement some procedures on arrival (observation, self-isolation – ed.)”

Yavorskiy believes that people must have the ability to choose for themselves whether to go to work abroad – even during a pandemic. The only condition which the government can set is to then not evacuate these people with taxpayer money.

“Human rights cannot be limited because of the person itself, because it itself has to decide how to exercise its rights,” says Yarovskiy. 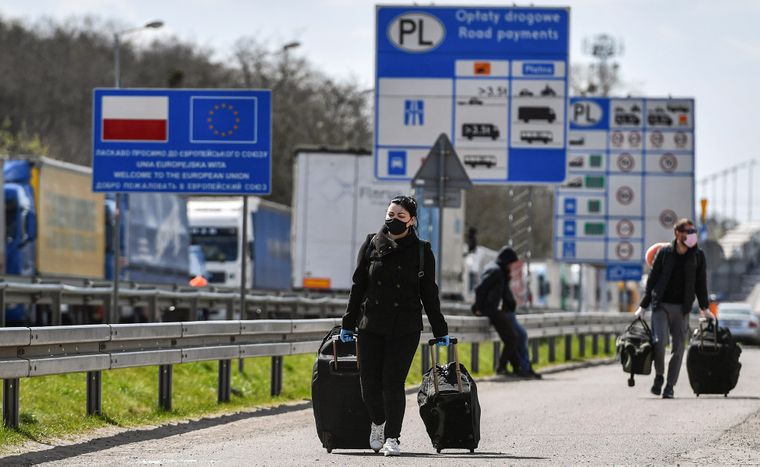 Statements, given on the background of possible economic loss, by Ukrainian authorities also carry this contradictory nature.

Remittances from migrant workers abroad are an important component of the Ukrainian economy, meaning that limiting workers’ ability to leave Ukraine by this or any other methods can have grave consequences. As shown by research by the Center for Economic Strategy, migration from Ukraine in recent years has been swingy and short-term: most labor migrants earn money abroad and plan on returning to Ukraine. Because of the pandemic, as well as the additional restrictions, these plans may now be in question.

In 2019, Ukrainian migrants and the diaspora abroad sent $13 billion back into the Ukrainian budget, according to National Bank of Ukraine data, and over $16 billion according to World Bank data. This is nearly 10% of Ukrainian GDP.

“This is many times, maybe even 10 times higher, than we received from foreign investors,” said economist and migration expert Andriy Haydutskyi in a comment to hromadske. “Additionally, this is real living money in hard currency, because what we get from investors is often either equipment or reinvested profits that they’d earned in Ukraine.”

The World Bank predicts that migrant remittances in 2020, in terms of cash transfers, could be up to 20% smaller due to the pandemic and border closings. 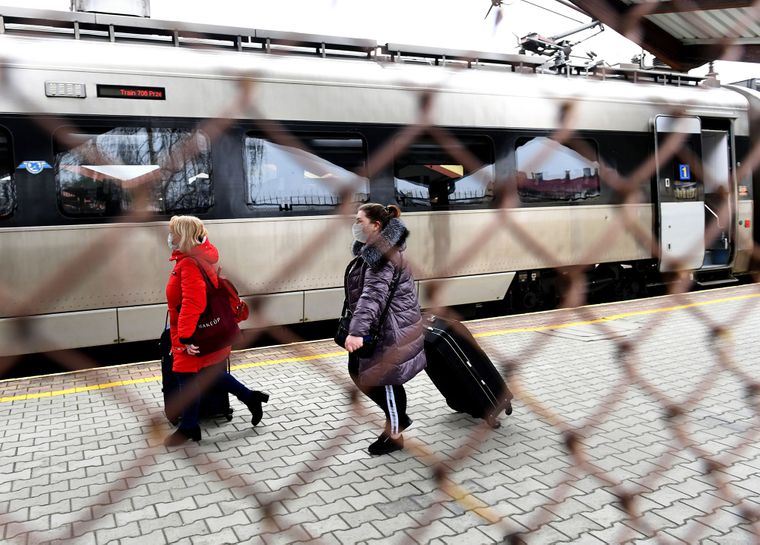 Ukrainians evacuate from the Polish city of Przemyśl by special train, after the closing of national borders due to the coronavirus pandemic. Poland, March 20, 2020. Photo: EPA-EFE/DAREK DELMANOWICZ

Considering the importance of migrant remittances for the Ukrainian economy, Haydutskyi believes that the Ukrainian government needs to show some flexibility. And instead of restricting departures, find a way to guarantee Ukrainian workers safe movement and employment.

“It’s good that there are companies that are ready to attract Ukrainians even for temporary work. This is a lot better than sitting [at home] and being unemployed. But it’s important to receive health guarantees for the duration of work abroad,” he says, adding that even if the government doesn’t give charter flights permission, employers and migrant workers will find other ways to leave the country – seeing as their corresponding interests aren’t going anywhere.

“The borders aren’t closed, and Ukrainians can travel across the border using their personal vehicles. If plane flights are restricted, what can middlemen and foreign employers do? They can come to some agreement on taking [workers] to neighboring Poland, to the closest airport and then from there fly out Ukrainians,” the economist believes.

Aksaniya, regardless of any contrary instincts of the Ukrainian authorities, still hopes that she’ll be able to go gather strawberries in Finland – maybe not now, but at least in the summer.

“We’re very much waiting for May 12 (the currently proposed date for the end of the quarantine – ed.) and we hope that the borders will be opened. I think that if not by plane, then we’ll find an overland route to leave – through Poland or Belarus. Though I’m in favor of giving people the ability to build their future in Ukraine. When we’ll have salaries of 1,000-1,500 euros, that’ll motivate people to stay.”