Living in the Most Isolated Village of War-Stricken Donbas
13469

EXCLUSIVE: The True Cost Of Remaining Ukrainian in Crimea
6264

A 5-year-old boy died in Kyiv hospital on June 3. Most likely, inebriated off-duty police officers fired at his head. For three days the boy's fate remained uncertain. He underwent a complex operation on the brain, but the injury was incompatible with life. Hromadske collected everything that is known about the murder of the child.

On Friday, May 31, police officers in Pereyaslav-Khmelnytskyi in Kyiv region shot a bullet at the five-year-old Kyrylo Tlyavov. The first version offered by law enforcement was that four children walked by a building, and one of them – Tlyavov – slipped and fell. However, doctors later confirmed a bullet wound in the child’s head. Investigators also found shells from Flobert cartridges, as well as glasses and cans, during an additional examination of the scene. According to them, drunk policemen were having fun and shooting at the containers.

However, another version emerged on June 5 that could mean that the lethal shot was actually fired by the 14-year-old son of suspected policeman Volodymyr Petrovets, as he was reportedly also present at the crime scene at the time of the shooting.

What was the injury?

Tlyavov was urgently taken for resuscitation to the local hospital with a closed craniocerebral trauma, a brain contusion, and a fracture of the temporal bone. Later that day, the boy was transferred to the Kyiv city center for pediatric neurosurgery where he was operated. The boy’s relatives told us that the doctors observed him 24/7.

"The skull is completely fragmented. The bullet ricocheted, destroyed the entire cranial box and got stuck in the brain. It could not be extracted and will probably stay there. The skull was trepanned, all broken bones were removed and the surface was completely cleaned out," the grandmother of the wounded boy told Hromadske.

On the morning of June 3, the boy was still in a coma. The doctors determined his condition as critical and told the family that the injury was incompatible with life.

"The boy is currently unconscious on artificial respiration. After the operation, we switched to smaller doses of drugs that stimulate cardiovascular activity. But we cannot say that the condition got better – it is tough. As a rule, this injury is very difficult to survive," the chief physician of the Kyiv city children's center of neurosurgery told the journalists in the morning.

According to Tlyavov’s parents, money was not needed for their son’s treatment at the hospital. However, people still sent money to their cards.

However, around 7:30 p.m. on June 3 the hospital reported the boy’s death.

The case is being investigated by the State Bureau of Investigations. Hromadske was told that it was the officer of the Patrol Police Response Group of Pereyaslav-Khmelnytskyi, and the water police Prevention Branch inspector that fired. Both men were intoxicated, but the level of alcohol in their blood is not yet known. Investigators are still establishing if anybody else was present at the scene.

READ MORE: Police May Be Involved in Acid Attack on Kherson Activist

Tlyavov’s grandmother says that relatives of the law enforcement officers who shot the child came to their home in Pereyaslav-Khmelnytskyi. Sister and mother of one of them said that they would not justify his actions, and transferred 10,000 hryvnias (around $370) to the family. Another 6,000 hryvnias (around $220) came to the parents from a relative of the second policeman. However, nobody contacted the victim's family personally.

"I might know the policemen who shot. I went to the police, I wanted to see them in Pereyaslav-Khmelnytskyi, but I was not allowed. I was told that the officers were still "blind drunk" at 10 a.m. [the following morning]. I just want to take a look at them, maybe I know them because our town is very small," says Tlyavov’s grandmother.

She also added that there are also two teenagers who are responsible for the tragedy.

What happened to the policemen?

They are currently detained in remand prison.

The State Bureau of Investigations reclassified the suspicion to "premeditated murder" on June 3. Initially, the police officers were accused of "reckless grievous bodily harm committed by a group of persons by prior agreement".

Both policemen, Ivan Prykhodko and Volodymyr Petrovets, who are suspected of killing the 5-year old boy, have been taken into custody until July 30 without bail by Kyiv's Holosiivskyi court on June 4.

The policemen refused to testify and pass tests for alcohol or gunpowder traces. According to Petrovets' lawyer, Andrii Kozatskyi his client refused to testify to prevent his testimonies from being used by law enforcers against his relatives. 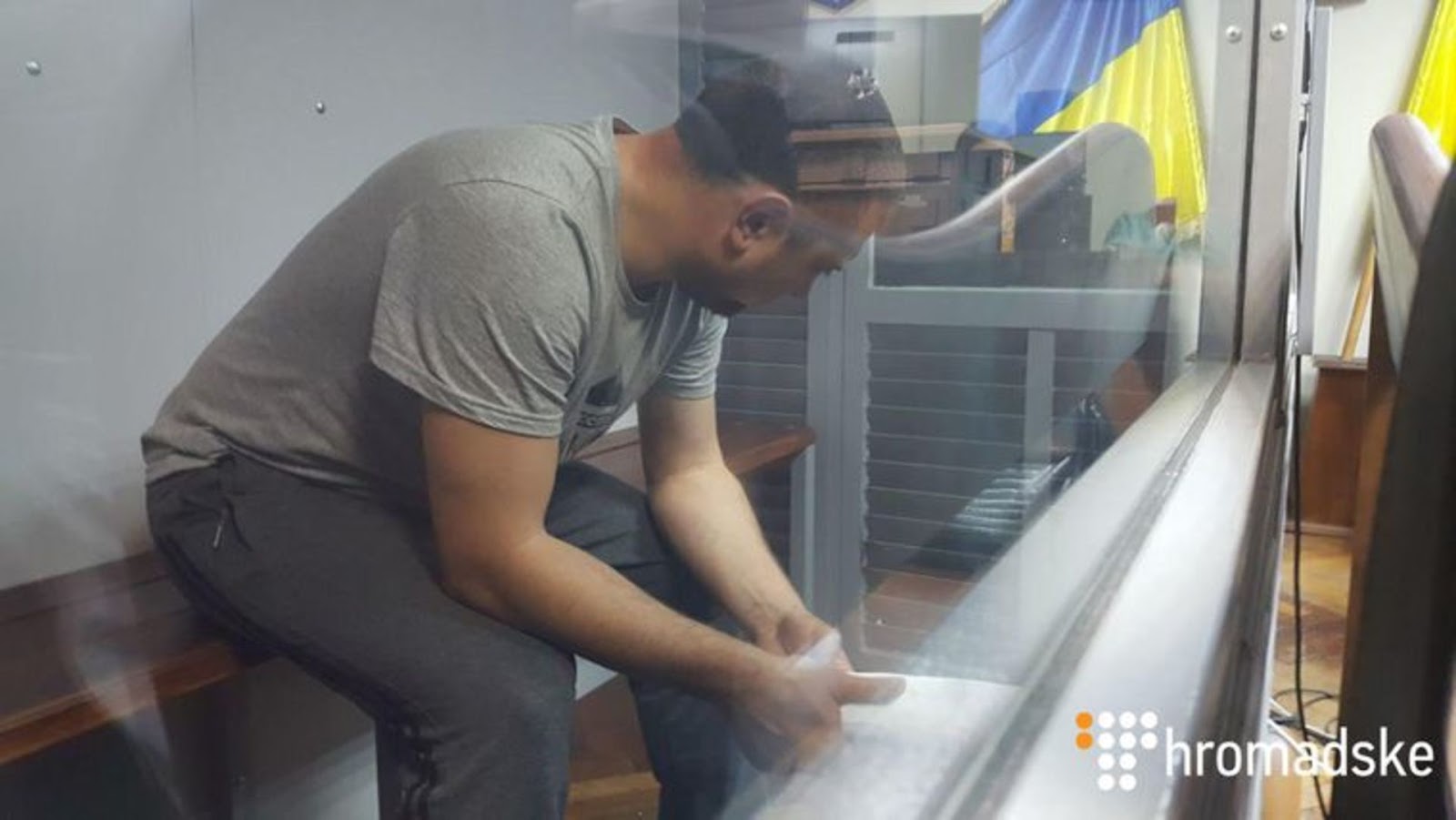 What is known about the weapon?

Flobert pistol cartridges were found at the scene. However, the State Bureau of Investigations is presently unable to determine which weapons were shot and whether this weapon is a firearm.

Hromadske talked to an experienced ballistics expert. He explained that Flobert revolvers are not considered firearms, but the manufacturers of shells have started using powder charge. In particular, the powder is added by Czech manufacturers, thus rendering pistols energy to break through the human body.

"There are no records of ownership of this weapon. Even a minor can buy one for 1,500 hryvnias ($56) – no permission is needed because it is considered a weapon for training and fun shooting," said the expert and added that in this case, most likely the gun was shot from a distance of fewer than five meters. He also noted this was not the first death induced by this type of gun. Flobert guns are freely available in the E.U. and were used by the terrorists during the Charlie Hebdo shooting in Paris in 2015.

The leadership of the police subdivision in Pereyaslav-Khmelnytskyi was suspended from performing official duties on June 3. This was reported by the press service of the Ministry of Internal Affairs.

Later, in the evening of June 3, people gathered outside the building of Ministry of Internal Affairs in Kyiv demanding the resignation of the Minister Arsen Avakov. Following that, head of the National Police Serhii Knyazev came out to speak and the resignation of Dmytro Tsenov, police chief of the Kyiv region, was announced. 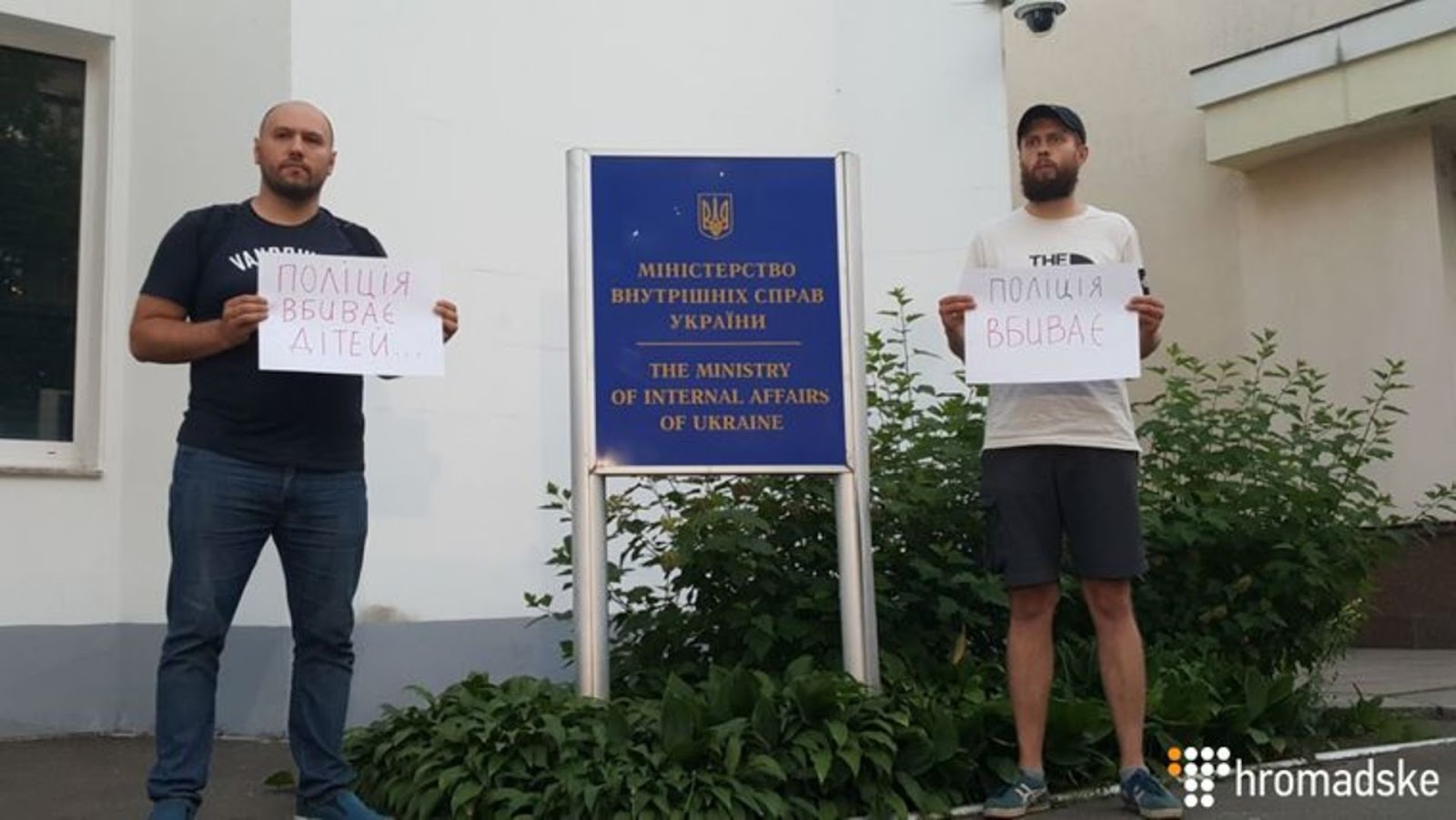 A rally was organized near the building of the Ministry of Internal Affairs in Kyiv. People demanded just investigation of the murder of a 5-year-old boy by policemen in Pereyaslav-Khmelnytskyi. June 3. Photo: Victoria Roshchyna / Hromadske

President of Ukraine Volodymyr Zelenskyy promised a just punishment for those guilty of the murder. The head of state wrote this on his Facebook page on June 3:

"I want to assure you that I will do everything to ensure that the guilty are punished justly. There will be no alleviation or attempts to bury the issue. This tragedy should become a lesson. Those who are obliged to take care of the safety of citizens must remember their responsibility at all times,"  Zelenskyy's statement reads.