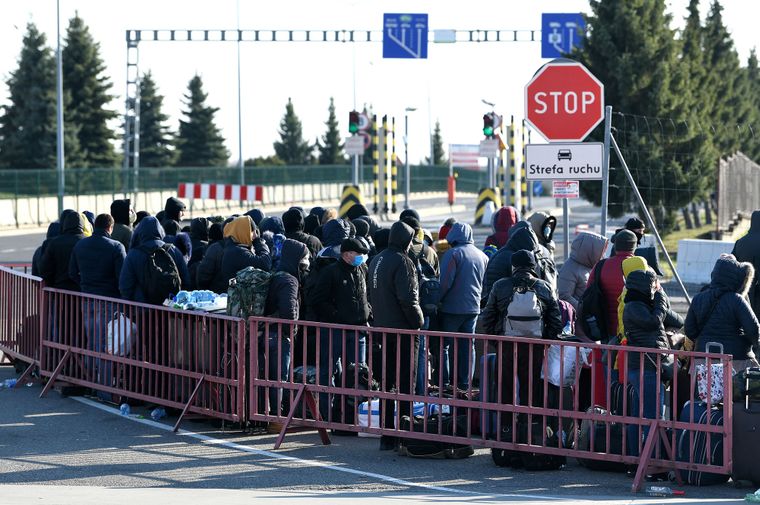 A line at the Korczowa-Krakovets border crossing checkpoint between Poland and Ukraine, March 24, 2020. Photo: EPA-EFE/DAREK DELMANOWICZ

"From Warsaw to the capital – 200 zloty ($50)”, “From Wrocław to Rava-Ruska – 400 zloty ($100), leaving today.” These and similar ads could be seen in social networks, in groups for Ukrainians working abroad, two weeks ago. On March 24, the ads changed: “Whoever lost their job – many supermarkets are hiring, can start tomorrow.”en needed for hospital cleaning, urgent”,

The Ukrainian diaspora in Poland is one of the biggest diasporas in the European Union, with over 220,000 Ukrainians having Polish residency permits. Another nearly 1 million Ukrainians are temporary and seasonal workers. The coronavirus has resulted in loss of income for many economic migrants, and has caused many to try to return home.

But due to increased scrutiny and testing on the border, lines to cross the Polish-Ukrainian border have forced hundreds of people into close contact, during a pandemic. 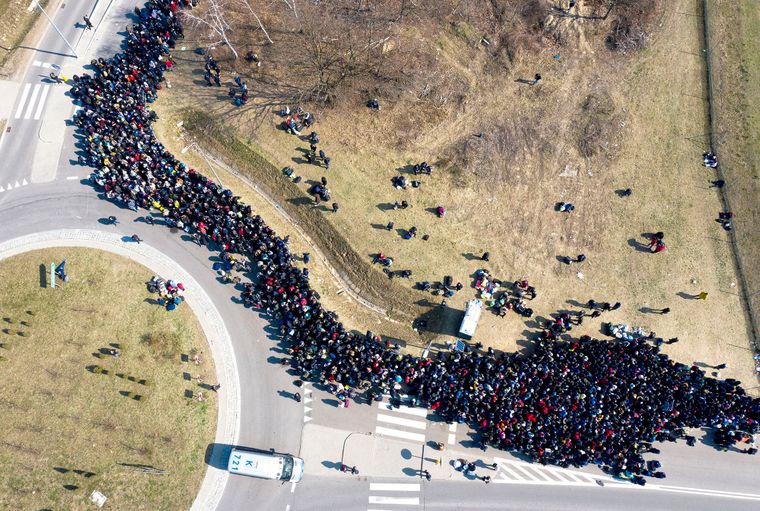 “[On March 27], at noon on the Polish border, we’ve already admitted passage to almost 7,400 of these people, which is more than the total amount yesterday – 5,400 people,” commented a spokesperson for the Ukrainian border agency.

At the same time, migrants say that they aren’t panicking just yet – some add that even if they lose a job as a factory worker, finding a job in retail isn’t too difficult. Even so, Poland has lost 20% of its migrant Ukrainian workforce already, according to a comment made by representatives of the Polish construction industry to the Polish parliament.

A Closed Border With Porous Exceptions

Poland announced the introduction of anti-pandemic measures on March 13, and on March 24, it banned going outside for the majority of citizens, with exceptions made for travel to work, grocery stores, and pharmacies. Sport practice and taking walks are allowed, but people are not allowed to form groups and can only go out individually.

Poland also closed its borders on March 13, and stopped all international civilian flights and rail transport. On March 15, foreign citizens were officially banned from entry into the country. But the list of exceptions to that rule is quite long – especially compared to other European countries who have also closed their borders.

For example, aside from foreign diplomats and Polish governmental partners, any foreign citizen with residency in Poland, with a work permit, and even just with a specialized work permit (a work permit that allows citizens of six Eastern European countries to work in Poland, including Ukraine – ed.) can still enter and leave the country.

But everyone – Polish and foreign alike – who crossed the border after March 15 are required to undergo two weeks of self-isolation in quarantine. Polish law enforcement report that they are carefully ensuring that people stick to those rules.

However, while Poland’s rules have been clear, migrants blame Ukrainian authorities for poor communication, with some saying that they weren’t sure if they’d be able to come home after March 17.

“The Ukrainian authorities closed the majority of border crossing points, and those that were left open were closed to pedestrians, even though the border with Poland is de facto open. (People came to the border without a personal vehicle are being shuttled across in buses – ed.) International transport has been completely shut down, and this has also made it harder to leave [Poland], as well as to return,” commented to hromadske Pavlo Kravchuk, an analyst from the ‘Europe Without Barriers’ NGO.

Dmytro Horban, first secretary for the Ukrainian embassy in Poland, noted that 95% of calls made to the embassy hotline were about leaving Poland. “By my count, there’s no panic, and mostly the people who are leaving are those whose legal residency has expired. From March 15 to March 22, about 20,000 Ukrainians have left Poland. A lot have left with government assistance: 4,222 citizens left on seven trains from Przemyśl on March 20 and March 21. [Air] company SkyUp on March 22, 23, and 25 organized flights from Warsaw to Kyiv, and over 600 people boarded them,” described Horban.

Rail transit employees in protective gear and masks guide passengers on the special route Przemyśl-Kyiv at the train station in Przemyśl, Poland, March 20, 2020. Ukraine implemented special domestic and international train routes as a result of increased protective measures due to coronavirus. 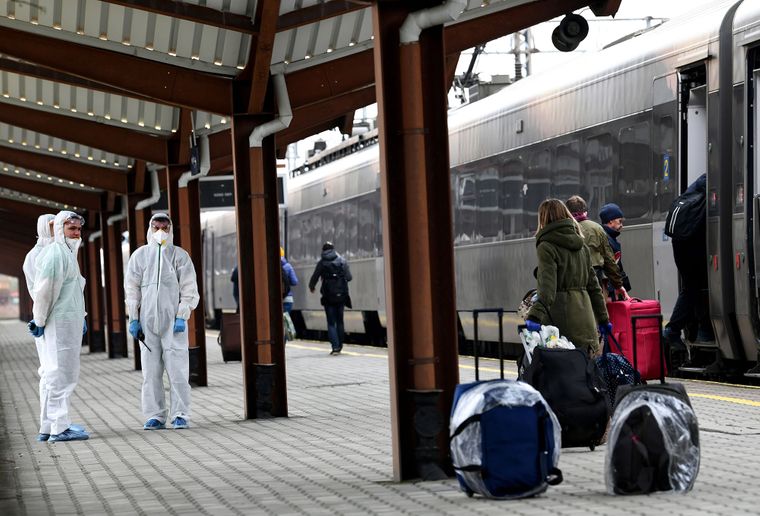 No Sanctions For Overstaying

Leaving Poland isn’t the only worry for Ukrainian migrants – obtaining work permits and residency in Poland remain an open question. Anatoliy Zymnin, a PR manager for recruiting agency EWL Group, told hromadske that on average 20% of Ukrainians workers in Poland need to update their work and residency documents. “Entering [Poland] for Ukrainian workers is, in the near future, difficult or even impossible,” explains Zymnin. “There’s a required quarantine, the Polish consulates and visa centers in Ukraine are closed, and the cancellation of flights hampers migrants’ mobility. That’s why we hope that the Polish government will think of some measures – in the first place, to cancel punishments for those whose work permits or residency have expired. It would very much help if a new form of work permit was authorized during a pandemic, which employers could register over the internet.”

And the Polish government has introduced some measures aimed at easing migrant’s lives in a coronavirus-struck Poland with a series of adjusted regulations on March 20.

As a result, people who have their visas or residency expire during the pandemic can send, by mail, a petition to the regional migration department asking for their documents to be extended (for visas) or for new ones (for residency). They’ll be able to do this 30 days after the government announces the end of the quarantine.

The Ukrainian embassy in Poland had previously said that Polish border agents would not sanction those Ukrainians who have exceeded their legal stay in Poland, though the Polish government has yet to elaborate on a few key categories of Ukrainians – those travelling in Poland as part of the visa-free regime, and those whose work permits have expired.

There’s Work, But Not For All

Poland’s unemployment numbers have fallen to a record low in recent years – 5%. And Poland has also been employing many foreign workers, with Ukrainians making up the largest share. Hundreds of thousands of Ukrainians have found work in various sectors of the Polish economy, such as agriculture, services, and even white collar work in offices.

Poland shut down all malls, cafes, and restaurants on March 14, allowing the latter two to only function via take-out. Government bodies and finance, IT, audit, marketing, and related companies were converted to allow workers to work remotely. Kindergartens, schools, and universities have also been shut down.

Pandemics and the threat of an economic crisis can change priorities: workers for companies in what were considered growth sectors just a month ago are now afraid for their jobs due to the loss of international connections – while warehouse workers, truck drivers, and cashiers have ended up on list of essential workers alongside doctors and nurses.

Sofia, a Ukrainian from Kyiv, moved to Warsaw in 2015. She worked at an IT company that provided services for tourism companies, and was very satisfied with her job – but now she’s no longer certain of her future. Her company develops booking systems for flights, used by air operators, travel portals, tour agencies, etc., – but this sector specifically has felt the biggest blow from the coronavirus. “Our profits depend on the number of transactions: ticket searches, changed reservations, purchased luggage space, and so on. Last week, there was a lot of movement – Poles were actively looking for tickets to get home. But now – silence. People aren’t reserving flights for the spring, because there are government restrictions – and for the summer-fall as well: there’s a lot of uncertainty with what will happen to jobs, with salaries,” said Sofia.

From the moment that the Polish government announced anti-pandemic measures, companies have closed down their offices, and everyone who can is working from home. Actually going to the office can only be done with special permission from the company’s management.

“While we were warned that there wouldn’t be any reductions, the situation is still uncertain. We’re reliant on client payments, but many of them are simply running out of money. If low-cost airlines have reserves up to a year, then traditional airlines have already started reductions and personnel transfers to part-time work,” states Sofia. 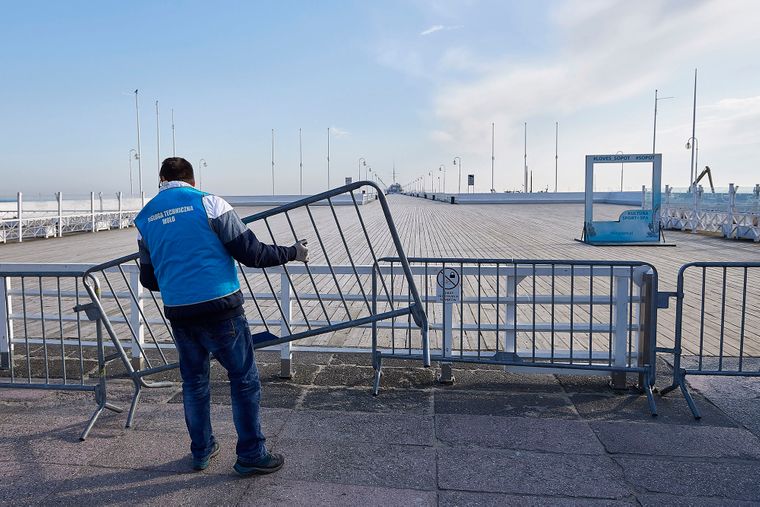 Workers install barriers to prevent visitors from going to the Gulf of Gdansk during the coronavirus quarantine. Sopot, Poland, March 26, 2020. Photo: EPA-EFE/ADAM WARZAWA

Yuriy from Sumy isn’t complaining about the lack of work. He’s lived in Poland for over 10 years, and for the last year he’s been working at a Polish supermarket chain. His job isn’t threatened – in fact, his management is promising bonuses for March.

“As soon as the government announced the implementation of the situation of epidemiological threat, the store where I worked earned as much money for the first two days as it usually does in four. Now there’s noticeably less customers, and we have some restrictions – only 40 people at a time can be in the store, and the working hours have been cut – we previously worked from 7 a.m. to 10 p.m., but now we work from 8 a.m. to 8 p.m,” Yuriy stated.

“We encourage customers to keep at least a meter away from each other. The most important new thing is the shift structure, which now doesn’t overlap with each other. The first shift always has the same employees – they don’t see the second shift at all, or other words that will come the next day. If someone in a shift gets sick, then they can be sent to quarantine, but the others will stay together,” relayed Yuriy.

While employers are attempting to transfer their employees' work to Skype, Zoom, and other teleconferencing software, that isn’t possible in all industries. In Poland, nearly all the car factories have closed down, and the next expected closures are household appliance factories. Theoretically, workers in these closed industries should still receive their salaries, but migrants are unlikely to be included.

“The people who will receive salaries while [industries] are closed are those who have signed labor contracts.Migrants in Poland usually work on the basis of non-judicial deals, which means they aren’t protected if they’re fired or because of epidemic situation,” noted Ignatio Yuzvyak, an employee of the Warsaw University and a member of the Worker’s Initiative trade union. “Ukrainians in Poland work in manufacturing, where the labor conditions often do not allow for the necessary sanitary measures. Construction is a wellspring for shadow employement, without any sort of written agreements. The biggest question is what to do with agriculture. The season is starting, but new workers, during a situation with closed borders, will most likely not come.”

So far, hromadske hasn’t heard of any mass expulsion of Ukrainians from Poland.

“If the factories stop working, like in the car manufacturing sector,” explained Anatoliy Zymnin, “then we’ll offer Ukrainians work in retail, logistics, and transport. These industries currently have heightened demand for workers.”

At the moment, the migrant situation in Poland is stable. The first test of their situation will come on April 10, insists Ksenia Naranovych, head of the “Beyond Borders Development Fund.” “On the 10th of every month, people have to pay rent for their apartment or to pay their mortgage. Migrants rarely own their own residence abroad, and for them, the ability to pay their rent is a critical matter for their residence in Poland. For March, they paid before the quarantine was declared. But those who have now lost their jobs, whose salaries have been cut or their profits have dropped to nothing, will have to in a few weeks answer the question: does my stay in Poland make sense under the current economic situation?”