Another Frontline. Kyiv Veteran’s War Is Not Over Yet
68885

“I’m the Change”: What It’s Like to Be Feminist in Moldova, Armenia, Ukraine, and Russia
21391

Chairman of the Verkhovna Rada Dmytro Razumkov, July 14, 2021 Photo: hromadske
On our “Mokryk Live” program, the Parliamentary Speaker Dmytro Razumkov assessed the work of Arsen Avakov as Minister of Internal Affairs, mentioned what could force him to resign, and explained whether he really signals to MPs how to vote for various bills, among other things.

Is Dmytro Razumkov second only to Zelenskyy?

I don't think one should feel like the second [most powerful] person in the country. This is a position in which you do your job. But you should not break away from the rest of the people.

The main problem of power is when you get into big offices, you lose touch with reality. When you get into state institutions, it feels like there is a different air ㅡ people change a lot. And you should not change, because sooner or later, you will lose this power. 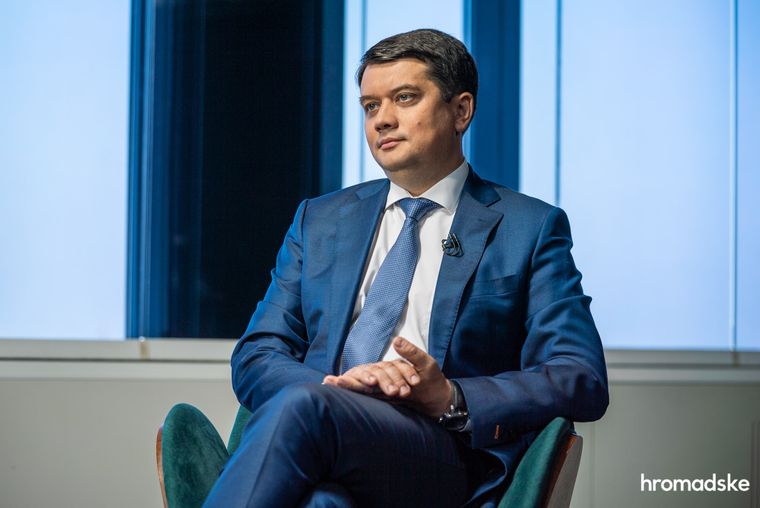 On relations with the president

According to Razumkov, he has a "normal working relationship with the president," but he may have different positions with him. According to him, face-to-face time is rare.

“In general, these are more often some joint meetings. There haven’t been any face-to-face [meetings] in a long time ago. More often than not, there are a large number of people who take part in the meetings,” he said.

On the resignation of the long-time Interior Minister Arsen Avakov

According to the speaker of parliament, Avakov is a minister who has had success in office.

"He was and still is a good minister, performing his duties well," Razumkov said.

He added that although we can find "a million problems" in Avakov's activities, he is a "good minister" overall.

Besides, the chairman of parliament declared that he is ready to support the appointment to the position of the chief of the Servant of the People MP Denys Monastyrskyi.

"I started working with [Mr. Monastyrskyi] during the election campaign. I consider him a professional, who is well acquainted with the work of the Ministry of Internal Affairs," Razumkov noted. 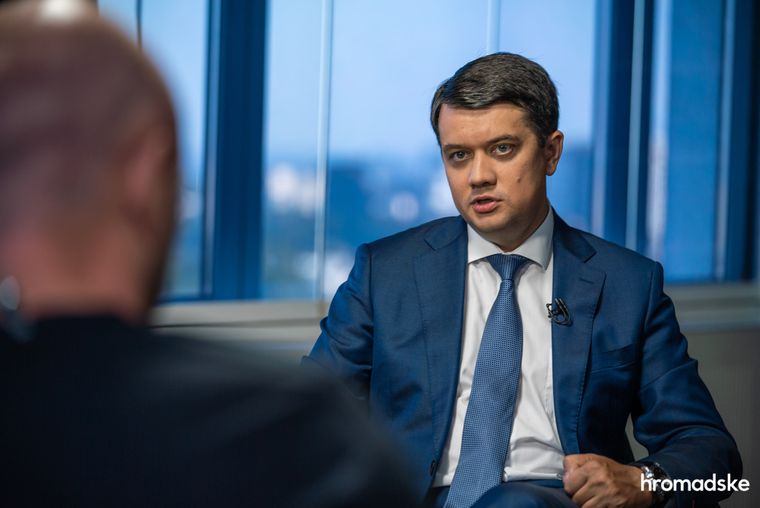 What can make Razumkov resign?

I don't know what I should have to do to feel so ashamed that I could no longer perform my functions. Everything else ㅡ I hope that in two years I have studied my work well and will continue to do so in the future. As of today, there have been no major complaints from my colleagues in parliament: neither from the majority nor from other political forces. I'm not going to resign, I like my job. I hope I do it well. I hope I will not be ashamed of what I have done.

Did Razumkov really signal to MPs how to vote in the Rada?

During the voting in the Rada, Dmytro Razumkov addresses the deputies: "I ask you to support and vote" and "I ask you to decide and vote." This has led to speculation that the decision of MPs to vote for certain documents may be related to whatever phrase the speaker utters.

Razumkov agreed that his phrase often coincides with the result of the deputies' vote, but denies the direct connection and emphasizes that it is a coincidence: "I've said that I, as an MP, can also express my position on certain issues. But I appreciate that my colleagues often pay heed."

At the same time, Razumkov noted that he "does not put pressure on anyone."

"Each parliamentarian decides how to vote. You are now talking about whether I am expressing my position or not. But objectively, factions always sit in the parliament, consider the agenda, follow it and decide: to support or not to support this or that bill," he said. 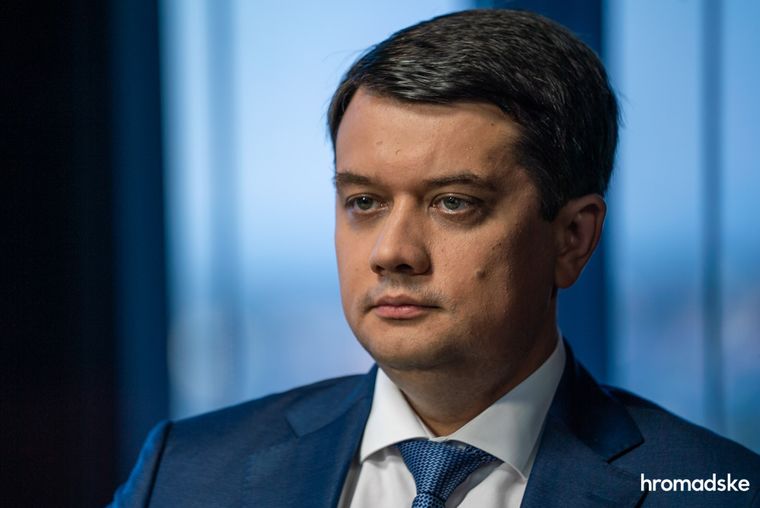 Why didn't you vote for the medical cannabis bill?

This bill was about money. About production, not about providing people with painkillers. If it went: let’s expand the list of drugs that can be provided... well, today we already have other painkillers, other drugs that are under clear control. But this one is still more about business than sick people.

If you need to provide people with painkillers ㅡ well, this should be done 100%. But there are other mechanisms for this. It is not necessary to adopt a law on cultivation.

According to him, the list of drugs that patients are allowed to be provided for analgesia can be expanded through the decision of the Cabinet.

About "legal spam" in the parliament

Like the deputies from the majority, the opposition MPs have the right provided by the law on regulations. They use it. Do I always like it? Depends. Amendments can be completely different, not even con the number of questions. There can be thousands of edits, but they are all legitimate... And then there is "legal spam". This is also a problem we have faced, but in order to solve it, it is necessary to amend the Constitution. 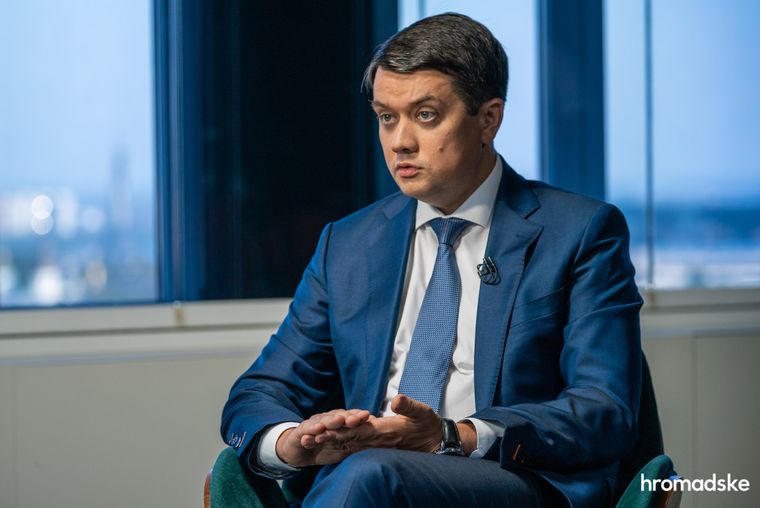 Is it possible to dissolve the Verkhovna Rada now?

Razumkov believes no. Despite the rather low level of trust in the legislature, the speaker believes that this is not a reason to dissolve it, and according to the law, there are no grounds.

In particular, the law stipulates that the Verkhovna Rada may be dissolved due to the absence of a coalition, government or if the scheduled sittings of the Verkhovna Rada do not take place within 30 days (however, this norm does not actually work: it is enough for one deputy to attend a sitting).

"This does not mean that in a month or two or three such a situation cannot arise. Maybe. The coalition may fall apart, a new government may not be elected..." Razumkov says.

"One needs to pay attention to the ratings when the election is approaching or when you are in the election process. Then you start focusing on this indicator," Razumkov said.

According to him, since there are no elections today, it is not entirely correct and correct to measure the level of support in the elections.

He considers measuring the level of trust and distrust to be a more accurate indicator: "I would be lying if I said that I do not look at sociological ratings. Yes, it is important for me when a large number of respondents support me. It helps to work. Therefore, a high level of trust or distrust is an indicator of whether or not you are moving in the right direction."

Inside The Maidan That Wasn't
4845
Politics

A New Government for Ukraine: One Female Minister and "Indispensable" Arsen Avakov
1433