After one and a half months of quarantine, some Western European countries are easing their restrictions. But while the pandemic is on the decline in Italy and Spain, Europe's COVID-19 epicenters, the World Health Organization (WHO) is concerned that countries in Africa, Latin America, and Eastern Europe remain at risk.

Most Eastern European countries have so far managed to successfully curb the spread of the coronavirus. While the COVID-19 death rate in Spain has been 517 deaths per 1 million people, 453 in Italy, and 353 in France, it is only 21 in the Czech Republic, 16 in Poland, and 4 in Slovakia.

Croatian outlet Advance, which investigated the coronavirus situation in Eastern Europe, listed some possible reasons behind this difference: the fact that Eastern Europe is a less popular tourism destination, mandatory tuberculosis vaccinations, possibly inaccurate statistics, and the mentality of the former socialist countries’ citizens who are allegedly "more used to obeying" and adhere to the quarantine more responsibly.

Here is what the current situation in these countries is, and why not every government believes that quarantine is needed.

"We are doing very well, perhaps even better than expected," Slovak Prime Minister Igor Matovic said at a press conference on April 29. Currently, there are around 1,400 cases of coronavirus infection in the country, with only 25 deaths. And two weeks ago, the government decided to ease quarantine measures.

Slovakia has responded to the coronavirus outbreak very quickly. The government has decided to close its borders and educational institutions two days after the first COVID-19 case was confirmed on March 6. Immediately, international traffic was restricted and three international airports in Bratislava, Košice, and Poprad were closed. Movement within the country was also restricted, and all mass events have been banned.

With the new government in place since March 21, the country has increased the testing to 300-400 tests a day and is now planning to increase it tenfold by involving private laboratories.

Tracking contacts of the infected using mobile data and an information campaign have also been important in deterring the outbreak. Since March, Slovak politicians have been promoting the wearing of masks on TV. And Slovak President Zuzana Čaputová’s appearance in a mask in the tone of her dress, while presenting the new government, was discussed across Europe. 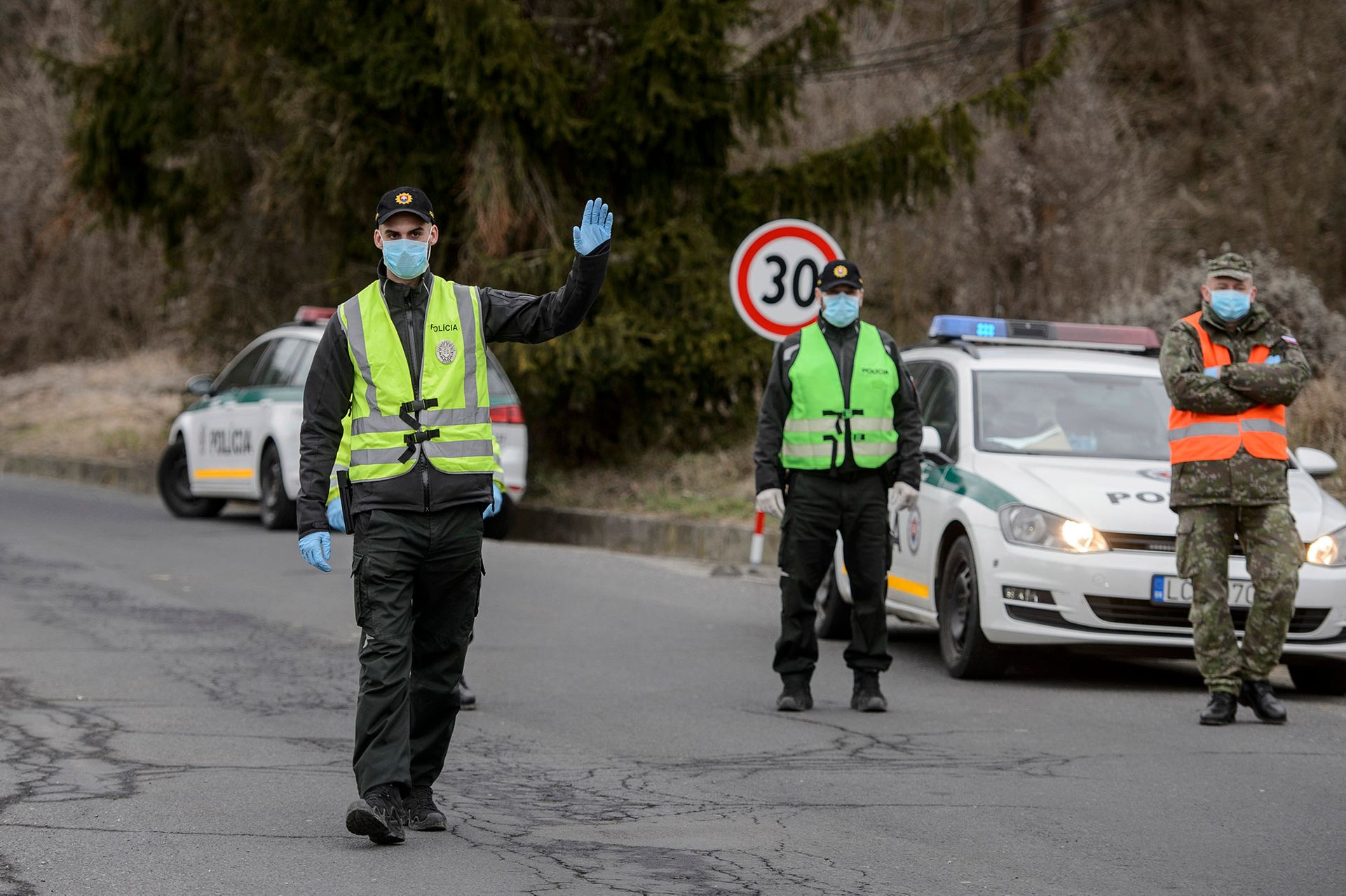 Masks became the main attribute of the quarantine in the Czech Republic – penalties for not wearing a mask amounted to several hundred dollars. Even the Czech Interior Minister Jan Hamáček had to pay a fine for taking off his mask during a videoconference in a hall where there were other people besides him.

In Czechia, 252 people have died from COVID-19. And the country is also easing the quarantine measures and opening it's borders, being the first in Europe to do so. But the state of emergency which was announced on March 12, for the first time throughout the country, will be in place until May 17.

People can even go on vacation now. Czechs can fly to Belarus, which did not introduce a quarantine at all, or drive to Austria – but one can cross the border only by having a negative result on a recent coronavirus test – which costs about 150 euros.

“Traveling abroad is still possible only in theory. According to our legislation, we had to open the borders, but you actually can't get anywhere. Because no one flies and no one will let you in,” explained Czech Prime Minister Andrej Babiš. 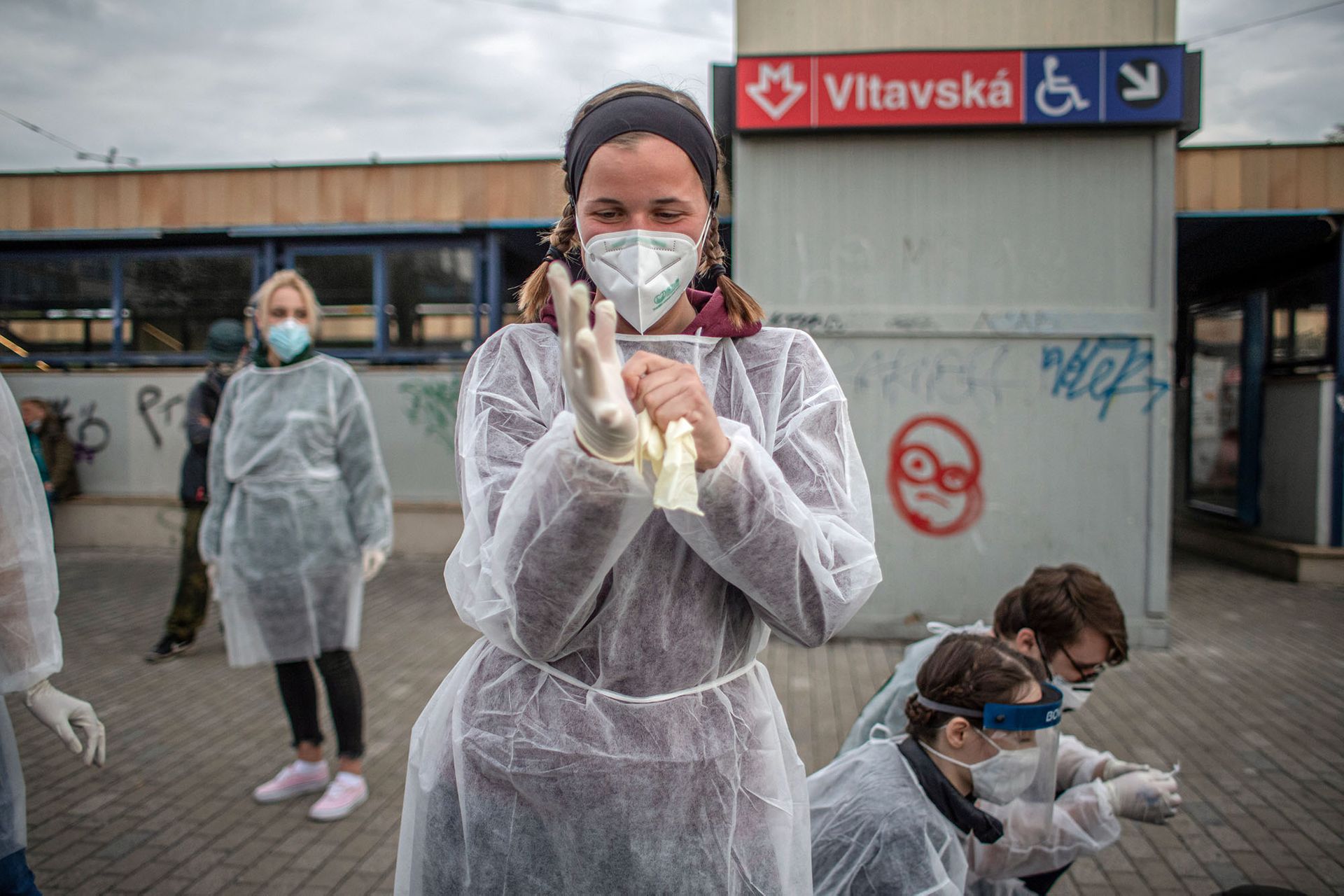 Medical students in protective clothing examine the homeless in Prague, Czechia, April 28, 2020. The student association Medics on the Street have been assisting homeless people or those in distress before and during the coronavirus pandemic. Photo: EPA-EFE / MARTIN DIVISEK

Like Czechia, Moldova has imposed a state of emergency throughout the country at the beginning of the pandemic. It’s supposed to end on May 15, and Prime Minister Ion Chicu stated that the government won’t prolong it. During the quarantine, only charters flights agreed upon by the emergency commission have been allowed.

However, the government of the country where 132 people have died from COVID-19 has warned that the quarantine measures won’t be eased for all industries and that the relief may only be temporary.

Schools and universities will only open starting with the next academic year, though kindergartens should resume work in June.

"We have no right to risk the health of our children. Therefore, we will consider the issues related to the education system separately. It is likely that schooling will resume on September 1. However, maybe if there is no risk of a new outbreak of the epidemic, children will return to schools as early as June. We are now looking for solutions to help students transition to their next year and to calculate semester scores,” said Moldovan President Igor Dodon.

Although the authorities say they are in control of the situation, doctors complain about poor equipment and low salaries. In addition, almost a quarter of the 4,200 coronavirus cases in Moldova are medical professionals. Since it is unsafe to be in hospitals, lightly ill patients will not only just be treated, but now also tested at home – special mobile teams are being created. 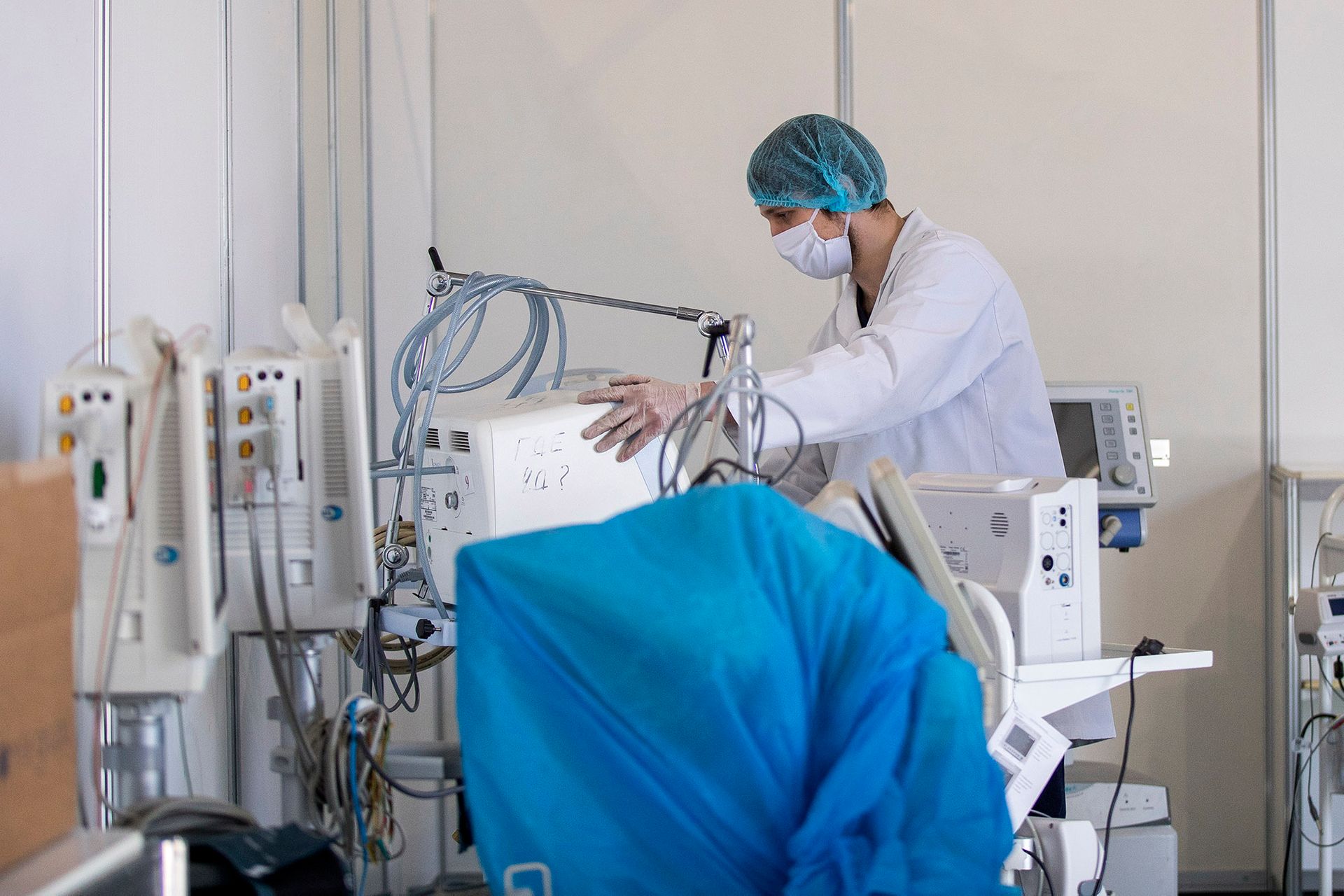 Russia: Peak Not yet Passed

Russia has not eased the quarantine measures yet. May 3 alone saw a record 10,600 new cases. In total, there are about 155,000 confirmed cases in Russia – more than in China and Iran. And Russian Prime Minister Mikhail Mishustin has also been infected and is now being replaced by Deputy Prime Minister Andrey Belousov.

The working days in the country are suspended until at least May 11, and the celebration of the 75th anniversary of the victory in World War II on May 9 had also been canceled. The Kremlin recommends that during the May holidays people don’t expand their circle of communication and don’t drink alcohol.

Not all regions of the Russian Federation have strict quarantine measures in place. Wearing masks in public places is mandatory in only ten regions. And if the situation does not worsen, the existing quarantine restrictions will be eased as early as May 12.

“There is still a very high risk of a second wave. That is why we need very thoughtful decisions, carefully thought out and agreed with the specialists”, said press secretary to the president Dmitry Peskov.

Quarantine has already caused outbreaks of discontent in some regions. In North Ossetia, hundreds of residents went out to protest on April 20, inspired by the calls of famous opera singer Vadim Cheldiyev. After clashes with law enforcement officers, the rally was dispersed: nearly 70 people were detained and Chaldiev was arrested for two months.

During the May holidays, residents of large cities can only move around the city with special digital permits, which have been operating in Moscow since mid-April. In the capital, they are needed for transportation by any means of transport and are issued on the website of the Moscow City Hall or by special phone. But the introduction of this system is constantly accompanied by scandals: it caused huge queues in the Moscow subway on April 15 because of the checks, and on April 30, when the passes should have been extended, the system crashed again and revoked some previously issued permissions.

In addition, amid the coronavirus pandemic and the economic crisis related to it, confidence in Russian President Vladimir Putin, according to Russian Public Opinion Research Center, has dropped to 28.3%, a record low since 2006. 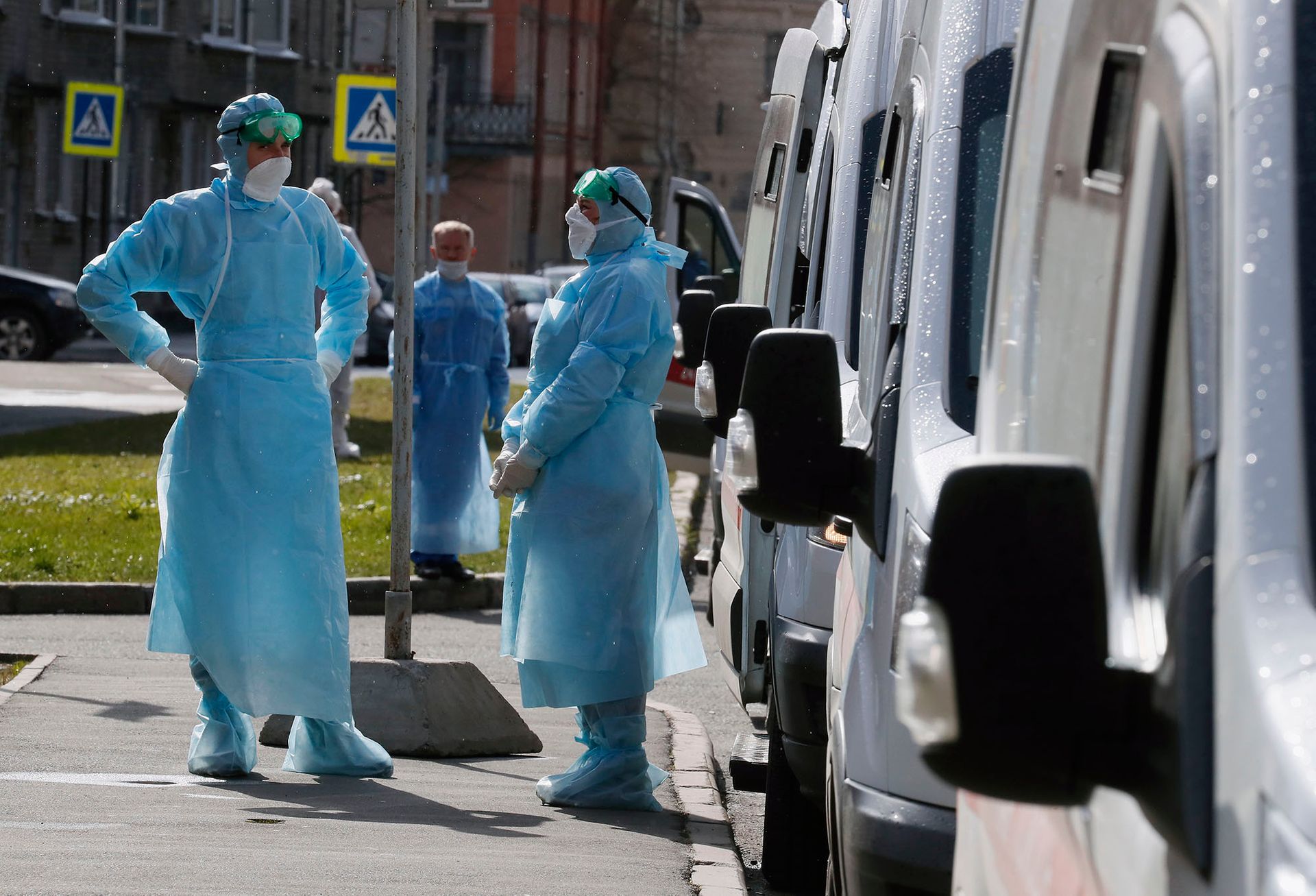 Paramedics of the Pokrovskaya Hospital in Saint Petersburg, Russia, where the COVID-19 patients are treated, April 27, 2020. Photo: EPA-EFE / ANATOLY MALTSEV

So far, Georgia has been very successful in fighting the coronavirus: the country of almost four million people has around 600 cases, of which only 9 are fatal. A state of emergency has been in force in the country since March 21, and a curfew since March 31. The subway and other public transportation have been stopped in the capital of Tbilisi. Schools and kindergartens were closed for quarantine on March 2, when the first three cases of COVID-19 infection were diagnosed in the country. And on the eve of Orthodox Easter, authorities even banned the movement of private cars and taxis and restricted transportation between major cities.

And it all worked – on April 29, the number of those who recovered was almost double the number of people infected with the coronavirus.

Hundreds of thousands of Georgians have been forced into self-isolation, and for many, severe quarantine has created big economic difficulties (unemployment in Georgia is over 10%, and the country has a high proportion of self-employed workers). Despite this, many still support government actions.

But quarantine is just one of Georgia's successful instruments, according to Jam News. The government's delegation of the stages of the fight against the pandemic to epidemiologists and the specialists of the Center for Disease Control has been another one.

Like in several Western European countries, Georgia began to ease the quarantine measures on April 27, allowing car movement and resuming delivery of goods. Authorities even allowed food markets to open if they adhered to strict sanitary requirements. However, most did not manage and haven’t opened yet – the market in Telavi was working for only three hours before it was closed because of sellers ignoring the requirement to wear protective masks and gloves. The market management was also fined 3,000 GEL (almost $1,000).

This is the standard fine for individuals violating the quarantine and the state of emergency in Georgia. But as the Georgian parliament decided on April 23, repeated violations will be punishable by up to six years in prison. 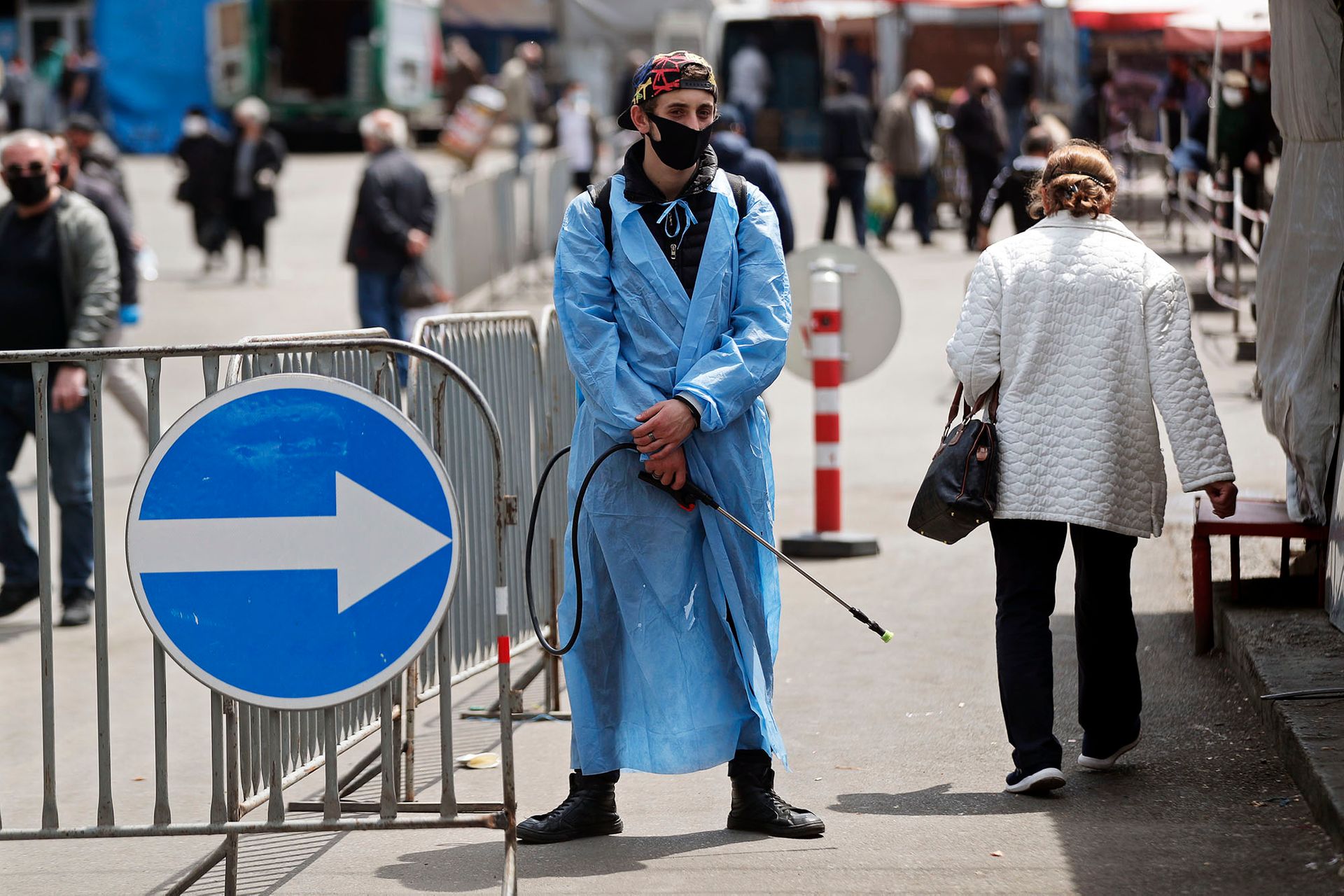 A man in a protective suit disinfecting carts at a street market in Tbilisi, Georgia, April 27, 2020. Photo: EPA-EFE / ZURAB KURTSIKIDZE

Belarus is the only country in Europe that has not introduced strict quarantine measures: people work as usual, students returned to school after a three-week vacation, and wearing a mask is not mandatory. President Alexander Lukashenko, despite warnings by medics, calls the coronavirus pandemic a "mass psychosis" and believes that there is no need for quarantine and border closures. His recommendations on how to fight the virus have been widely quoted internationally.

"Wash your hands more often, have breakfast, lunch, and dinner on time. I am a non-drinker, but lately, I jokingly say that you should not only wash your hands with vodka but also, perhaps to kill the virus with 40-50 grams [of vodka] in terms of pure alcohol. But not at work," Lukashenko said in mid-March, while European countries, including Russia, were closing their borders.

He also advised going to a sauna to prevent the coronavirus disease and to play hockey. Despite the fact that one of the players of the hockey team with whom Lukashenko played was diagnosed with the coronavirus, the president refused to take the test and self-isolate.

With almost 17,500 infected (and 103 deaths), Belarus has more cases per 1 million people than any other country in Eastern Europe, and even more than Iran. But the Ministry of Health says the coronavirus situation is under control and the country will be able to "prevent an avalanche-like increase in the number of infected" through timely testing and isolation of patients.

President Lukashenko also forbade "blocking people's way to church" on Easter.  And although there was a recommendation to refrain from attending churches, thousands of Belarusians attended church services, particularly, at the St. Elizabeth's Monastery in Minsk, where 100 out of 130 nuns are suspected of having the coronavirus disease. Moreover, some of the monastery’s nuns delivered consecrated Easter cakes to hospitals in Minsk on Holy Saturday. A friary in the village of Malyja Liady near Minsk, which Lukashenko and his son visited on Easter, was later closed for quarantine due to confirmed coronavirus cases.