donate
Hromadske UAHromadske RU
AboutWhere to watchAuthors
Contacts
"The ray of Ukrainian victory". The story of Orest from Azovstal
992
Trending
348

"Thank you for the shelter. Azovstal is the place of my death and my life," wrote Dmytro Kozatsky with the call sign "Orest" before his capture. Thanks to the photos of Azovstal defenders taken by Dmytro and spread by Ukrainian and world media, people learned what is happening in the bomb shelters of the plant, which was bombed by Russians on a daily basis.

"A romantic since childhood"

A smiling pure-hearted guy. This is your impression of the 26-year-old Mr. Kozatsky from the town of Malyn in Zhytomyr Oblast from all the photos on social media. For his mother, he is Dmytro. For the regiment – Orest.

"At some point in the 9-10th grade, he came to me and said that he wanted to change his name. I told him that it was his decision, but you were born Dmytro, it is a major holiday in Malyn, we baptized you in St. Dmytro's Church, we baptized you under the name of Dmytro and you have a guardian angel Dmytro. I asked him to ponder until he was 18 and then decide. He listened to me and did his own thing: when he got to the Azov Regiment, he chose the call sign 'Orest'. He reached his goal, so now he is both Dima and Orest. He likes this name, but I do not even know where he got it from; honestly, I do not remember".

Mrs. Iryna speaks of her son in a sonorous tone. She is wearing a bracelet of blue and yellow beads, and on one of her fingernails there is a trident. Iryna Ivanivna works as a conductor at Ukrzaliznytsia rail company, so she is often on work trips. And because of this, she says, her son had to grow up quickly – he had to look after his sister Dasha, who is several years younger. The close relationship between them remained even in adulthood.

"We were always together with him, we had such a strong bond. There were no secrets between us," says the sister.

When Dima moved to Mariupol, they talked for hours on the phone. Dasha told her brother about her boyfriend, and he told her about his work.

"I trusted him with Dasha because I knew he would feed and look after her. He was an obedient and creative boy. Once we bought him a bike, and he covered it with flowers. Dima has been a romantic since childhood," Orest's mother says. 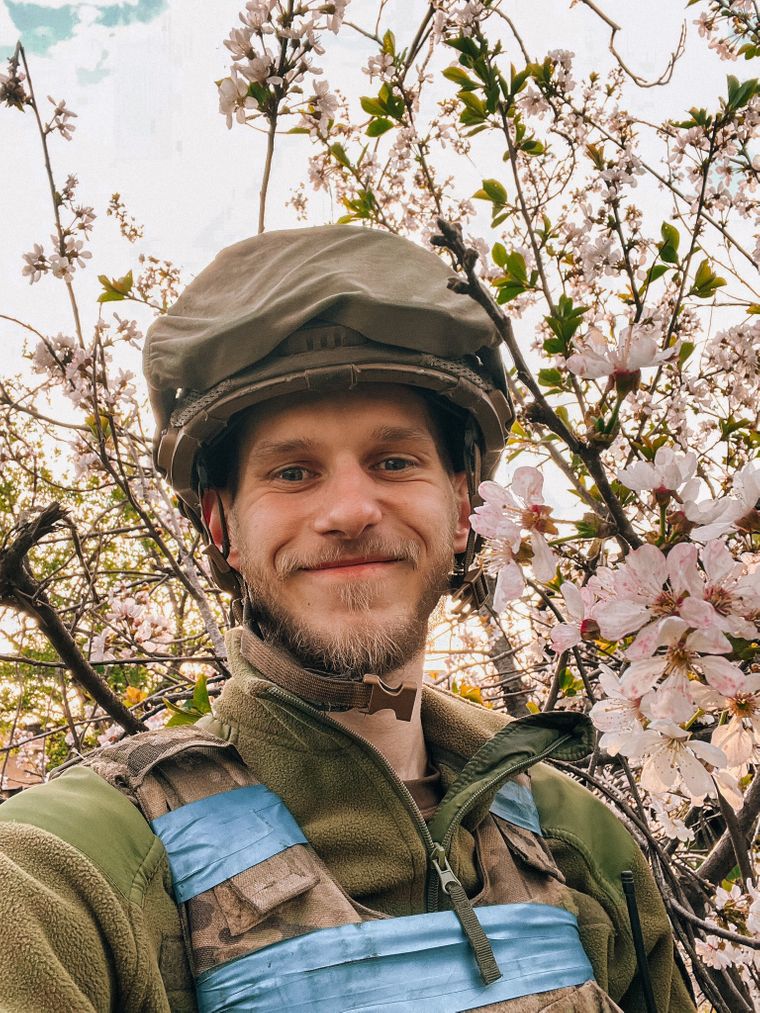 A flair for photography

Dima had a talent for photography since childhood. He practiced taking his first pictures on Dasha.

"Once, when my mother was not at home, Dima and I made me a dress of tulle, and he started taking pictures of me. I was a model for him," Dasha recalls.

Later, Dima went to a photography class, but there was no teacher to teach him how to take pictures. He mastered this sphere on his own.

"There he was given a camera to practice with. Dima wanted a Canon, but at that time our family was not able to buy him such a camera. His parents gave him a P&S cam. But he was carrying those cameras and lenses around like a kid with a new toy, afraid that I would accidentally break something for him," says Dasha.

"Everyone knew him not as a person who earns money like that, but as a guy who loves this business and always agrees to take pictures. Even when he started studying in Poland, everyone at the university knew him as a photographer," says Dasha.

"He put on a helmet, took a flag, and went to the Maidan"

When the Revolution of Dignity began in Ukraine, Dmytro was studying at university in Poland. On Christmas holidays, he came to Kyiv, put on a helmet, took a flag, and went to the Maidan.

"I was not happy that he was so eager to go to the Maidan. It was scary there too, but he went there anyway," says Iryna.

Since November 30, they had a Ukrainian flag on their balcony. It was flying until the end of February 2014. The flag was shabby, torn, but continued to hang. And Dima, says Mrs. Iryna, despite all the difficulties, persisted along his path. 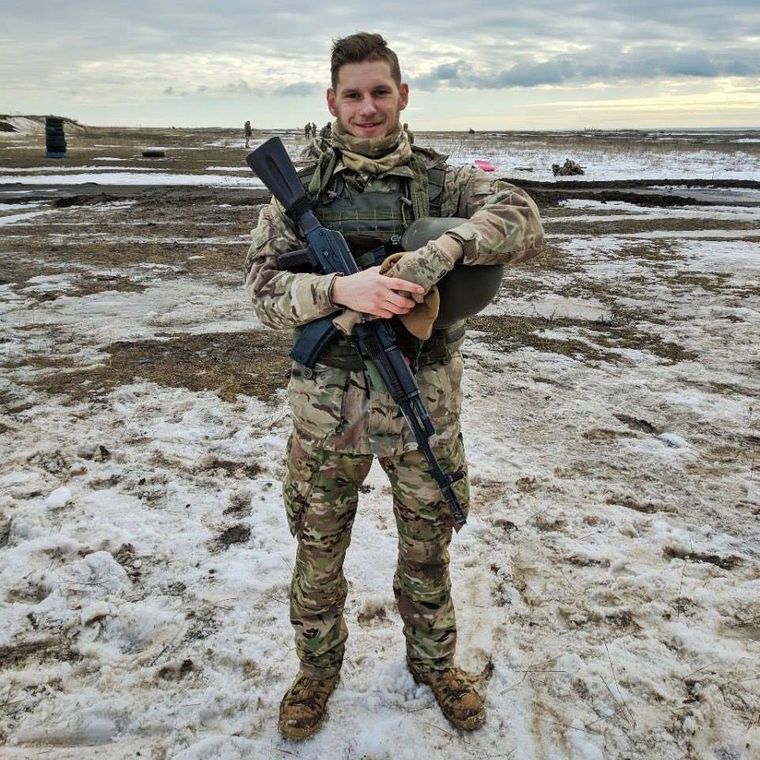 The path to Azov

Dima did not finish his studies in Poland. He enlisted in the National Guard.

"And then he was sent to Mariupol. It was also a shock for me, because then there was a front line, it was dangerous there," says Iryna Ivanivna.

In 2015, Dima started living in Mariupol. Later, his parents bought him an apartment near the Azovstal plant. His mother complained about the plumes of smoke and polluted air, but Dima loved his home. Two years later, he joined the Azov Regiment.

"It was not easy to get there, but I saw that he was going there purposefully. People in the Azov Regiment are patriots; he found many like-minded people there," says Iryna.

In parallel with his service, Dima continued to take photos. And at the end of 2021, he became the commander of the Azov press service, which he was very happy about.

On February 24, a full-scale war caught Dima in Mariupol.

Two days before the large-scale invasion, Dima asked his mother to collect family documents and pack a Go Bag.

On February 24 at 5:45 a.m. he called with the words: "Mom, do not panic, the war has started. All major cities of Ukraine are being bombed. Call Dasha and our relatives, tell them to go down to the shelters".

The following days they had brief calls – Azov defended Mariupol, and on March 1, the defenders entered Azovstal steelworks. Since then, Orest and his mother mostly exchanged only messages.

"Once I asked him if all his comrades were alive, and he did not answer me. Then I wrote that it was a stupid question, because many are not, and Dima did not answer again. I realized that I should not touch upon the topic that he was quietly shouting about," Iryna says.

On April 15, a powerful rocket hit the place where Dmytro was resting. He wrote to Dasha that it was his second birthday. The blast wave knocked the lad out of bed, he received a shrapnel wound to the head.

"Even then he was joking. He said that the occupiers hit the room where the soldiers kept their things, now he was left without manicure scissors and will not be able to cut his fingernails. I told him: 'Dima, are you serious? You have a head wound and you are worried about scissors'," Dasha recalls.

From time to time, Ms. Iryna asked if they had food. Orest maintained that there were supplies. But once he gave away the real state of affairs by saying that they managed to get into a warehouse bombed by the occupiers and finally fell asleep not hungry.

"Then I realized that they did not prepare the plant in advance, did not bring a lot of food there. They had what they managed to bring in those few days before March 1," says Orest's mother.

"When they left Azovstal, it got easier."

The last days before the capture were the most hellish. The positions where the Azov soldiers were hiding were leaked by one of the locals, says Iryna, so the occupiers were shooting directly at the lads.

"I was worried every minute, a lot of guys died there, the cream of our nation, and when the others came out alive, I was relieved, but now I am worried about how they are treated there, whether they are tortured."

Iryna's work and faith helped her to wait for her son from captivity: "I am not a pious person at all, God is in my soul. The photo of Dima with the ray also gave me hope that they will be released from captivity. This is a ray of our Ukrainian victory."

This text was written in August as part of a special project “In a steel embrace” which collected 34 stories of different people brought together by Azovstal. All of these stories are about hope and struggle, and the desire for freedom and love for Ukraine.

NB/ Now Dmytro Kozatsky is finally in Ukraine, he is one of 215 heroes who were released from Russian captivity on September 21.