"Cyborg" Valerii Honta died on the frontline in eastern Ukraine
5030

EXCLUSIVE: The True Cost Of Remaining Ukrainian in Crimea
7768

Freed Ukrainians who were previously detained in the temporarily occupied Donbas return to government-controlled territory during a planned prisoner exchange, not far from the occupied town of Horlivka, Donetsk region, Ukraine. April 16, 2020. Photo: EPA-EFE/YEVGEN HONCHARENKO

On April 16, 20 Ukrainians were returned home following a prisoner exchange with the so-called authorities of the occupied territory of Donbas. This exchange freed more civilians than military personnel – 9 from the so-called ‘Donetsk People’s Republic’ and 11 from the ‘Luhansk People’s Republic’. The occupying authorities took 14 Ukrainian-held detainees in exchange – even though Ukraine had planned to transfer even more people, but some refused the offer.

The exchange was not simultaneous – the freed Ukrainians were let go near the occupied town of Horlivka and at the Mayorske checkpoint. They were in medical masks due to the coronavirus quarantine, and will now spend 14 days in observation. They’ll be tested for coronavirus, along with a general wellness check. Conversations with their relatives, for now, will only take place over video conference.

Hromadske was able to find information about only 12 out of the 20 freed prisoners. The L/DNR occupying authorities had charged the majority of them with either terrorism or espionage. Here are their stories.

Hrynenko is a surveillance specialist from the 79th brigade of the Ukrainian Armed Forces, from the Mykolaiv region. His brigade declared him missing in January 2019, and in February, the DNR published what they called his video ‘confession’, where Hrynenko allegedly told his story. The 79th brigade immediately called this ‘confession’ a fake, obtained under duress.

Hrynenko was serving in the Pavlopol district in the Donetsk region. His so-called ‘confession’ claims that he was captured after stepping on a mine during an assigned task, and he was detained by Russian proxy militants following the mine’s explosion.

There is no confirmed data about Karas, but a person sharing his name and birthdate can be found in the ‘Mirotvorets’ (eng. volunteer – ed.) database. That site posits a tie between Karas and a current deputy minister of Internal Affairs, Anton Herashchenko.

Mirotvorets records Karas as a “traitor” and claims that he was a “participant in an armed gang in Dokuchayevsk” (a town in the Donetsk region – ed.) with the alleged rank of ensign’ in the DNR’s Ministry of State Security.

One of the eight Ukrainian servicemen released in the prisoner exchange. Shaydov was detained on May 22, 2019. At the time, he was said to have been assigned to the 43rd Separate Motorized Infantry Battalion. The soldiers were apprehended by an enemy formation while traveling by truck near the village of Novotroitske. Their route was misplanned, and they ended up in occupied territory claimed by the DNR. 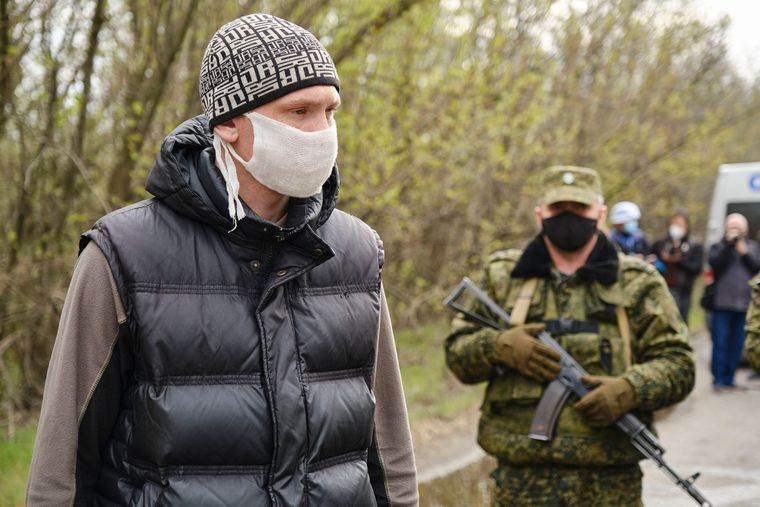 A Ukrainian returns to government controlled territory during a planned prisoner exchange with the so-called ‘Donetsk People’s Republic’, not far from the occupied town of Horlivka, Donetsk region, Ukraine. April 16, 2020.

Zheldak was detained in 2017. A briefing given by the LNR authorities at the time alleged that “Ukraine has started to use addicts as spies.” Zheldak was detained in the town of Kadiivka, where he lived. The LNR claimed that he had the codename Stakhanovets (literally, a resident of the town of Stakhanov, the previous name of Kadiivka – ed.) in the Security Service of Ukraine (SBU). He was undergoing opioid replacement therapy.

The LNR later published a video where Zheldak admits that he’d learned that opioid replacement therapy was being sponsored by the SBU. He claims in that same video that he’d traveled to the the government-controlled city of Lysychansk where the SBU asked him to photograph objects of interest in the occupied territory.

Mozhaev was detained in 2016. He’s originally from the Rivne region in western Ukraine. A video published by the LNR featuring the former detainee has him saying that he’s traveled to the LNR to be a ‘spy’. The self-proclaimed ‘Ministry of Defense’ of the LNR states that in the summer of 2016, he was recruited by the SBU and given the codename Archippus.’

Mozhaev claims in the LNR video that he was detained by Ukrainian authorities in his hometown for ‘refusing to be drafted’ and for ‘drinking alcohol in public.’ As a result, the SBU offered him the chance to be a spy. The police and the SBU in the Rivne region called these statements outright fabrications.

His mother told journalists that her son should have been in Russia, not the LNR, because he’d left for Russia in 2016 as a labour migrant. She added that he had been a soldier, and that he did not drink. He has a small daughter, currently in the custody of her grandmother.

Mironych is a former resident of Luhansk and the LNR claims that he has prior convictions. He was detained in Luhansk in August of 2016, after being charged for attempting to blow up an oil depot. A ‘court’ in the LNR sentenced him to 20 years imprisonment and confiscated his assets.

The LNR also claims that he had planted an explosive device and had tried to run, but was captured before he was successful, while the device was disarmed. They say he’d created the bomb himself on behalf of Ukrainian special service.

Polozov, a resident of the town of Kadiivka, was sentenced to 12 years imprisonment by an LNR ‘court’ on charges of ‘treason.’ LNR media alleges that he’d been recruited by the SBU, and lured his friend, Vasiliy Kryat, from occupied territory to government controlled territory, after which Kryat was arrested. LNR media further claims that Polozov received $174 for his ‘betrayal.’

Kryat was indeed arrested by Ukrainian authorities and sentenced to 3 years imprisonment. But his case was re-examined, and his sentence was changed to 3 years probation. He was transferred back to the occupied territories in December 2017, after which he traveled to Kadiivka and accused Polozov – resulting in the latter’s detention. 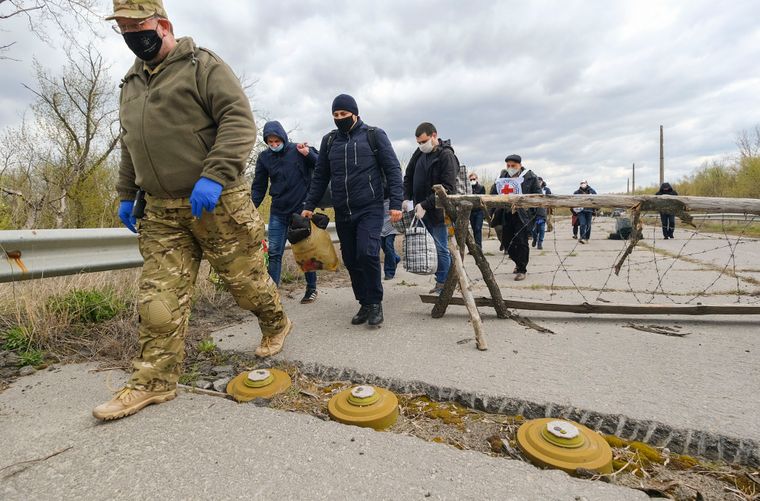 The Ukrainian side transfers prisoners for exchange near the village of Shchastya, close to the position of militants claiming to be part of the LNR. 11 people returned from occupied Luhansk to Ukrainian territory. Luhansk region, Ukraine, April 16, 2020.

Popova was sentenced by an LNR ‘court’ for reportedly participating in Ukrainian espionage on the orders of the Ukrainian special services. She received a 12 year sentence of imprisonment in March 2020. LNR authorities claimed that Popova recruited people to take part in the SBU’s ‘They’re waiting for you at home’ program, an amnesty program for people who refuse to fight in an anti-Ukrainian formation. The Luhansk authorities also claim that she gathered information on ex-fighters and officials in the LNR.

Rusinov was a student at the Luhansk College of Culture and Art. He was being held at the Slovyanoserbsk penal colony, after posting what LNR authorities called ‘inciting language’ on his social media under a pseudonym. He had been in custody since April 2018, and in October of that year was sentenced to six years imprisonment.

Their detention was trumpeted by the so-called ‘Minister of Internal Affairs’ of the LNR, Ihor Kornet. They had been detained on September 15, 2017.

The two had been blamed for conducting a ‘terrorist act’ in Luhansk on July 7, 2017. A woman had died as the result of a blast near a store in the city, and another five were wounded. Remains of an explosive device were found in a nearby trashcan.

LNR authorities alleged that eight people were involved in organizing the attack. Kornet stated that the LNR had detained five of them, including the Slyvky’s, while the others managed to cross the contact line into government-controlled territory. LNR ‘prosecutors’ were pressing for a life sentence for the pair.

Yakovenko, from the city of Dovzhansk in the Luhansk region, is accused of being an SBU courier by the LNR. This alleged SBU agent was recruited at the Mayorske checkpoint with the codename “Odnoklassnik” (eng. Classmate – ed.).

He was charged with delivering smuggled goods disguised as household appliances, and was responsible for hiding these goods for usage by Ukrainian sabotage and reconnaissance groups. The LNR had sentenced him to twelve years imprisonment.