Our editorial staff works around the clock from different parts of the country, so that you know what is really happening. If what we are doing is important to you and you have already donated to the Armed Forces of Ukraine, you can also support our information troops.

On the evening of July 17, President Volodymyr Zelensky unexpectedly suspended Prosecutor General Irina Venediktova and removed the Head of the Security Service Ivan Bakanov. Though complaints about their work have been voiced for a long time, publishing these decrees and their dismissal at this particular moment came as a surprise.

Traitors or undercover intrigues: why does the President want to unseat Bakanov and Venediktova?

Formally, both Venediktova and Bakanov were shown the doors because of the fact that they “did not notice” a bunch of Russian spies in their agencies.

“In particular, more than 60 employees of the prosecution authorities and the SBU remained in the occupied territory and are working against our state,” President Zelensky stressed in his evening address. He added that a total of 651 criminal proceedings into high treason and collaboration activities were registered.

Back in June, POLITICO magazine predicted that Zelensky will say goodbye to an old childhood friend (Bakanov and Zelensky lived in the very same apartment building and studied at the same school — ed.) — and allegedly all because of Kherson. Interlocutors close to the President told the media that Russian troops entered the city so quickly because the SBU officers were unable to blow up the Antonivsky bridge across the Dnipro River.

In addition, according to sources of the media, Serhiy Kryvoruchko, Head of Kherson’s SBU Directorate, ordered his officers to leave the city before Russian troops stormed it, against Zelensky’s orders.

Ihor Sadokhin, an ex-assistant to the Head of the Kherson’s SBU Directorate, is also suspected of working for Russia. And on July 16, Oleh Kulinich, former Head of the SBU Department in Crimea, who was fired in March, was detained — he is suspected of transferring intelligence to the Russian special services.

Andriy Naumov, former Head of the Main Internal Security Department of the SBU, went abroad a few hours before the invasion by the Russian Federation and was detained on June 7 in Serbia. He is suspected of transferring data which was a state secret to the Russian special services, in particular information about the Chornobyl nuclear power plant. The President stripped Naumov and Kryvoruchko of their ranks and denounced them as traitors.

“If we talk about what happened on February 24 and the preconditions, there are many questions to the Security Service of Ukraine. In particular, there is a question of Russian influence and Russian agents who integrated directly into the Security Service. This became very clearly visible when the Russians activated all their capabilities and means and “revealed” their agents in February-March, which led to tragic consequences, in particular in the Kherson region. In my opinion, there are questions to Bakanov about the reform of the SBU, his insufficiently proactive position and rapid response to challenges,” says Servant of the People MP Maryana Bezuhla, who heads the Verkhovna Rada Subcommittee on National Security and Defense — this Subcommittee received reports about the problems in the special service.

However, the opposition believes that there were more political reasons for Bakanov’s removal.

“There is also an unofficial version that Bakanov was actually removed from direct communication with Zelensky, and this communication was taken over by Andriy Yermak (Head of the Office of the President — ed.). The worst fact was that at the beginning of the active phase of Russian aggression, in February, Bakanov was out of the country. Therefore, Yermak has since tried to remove Bakanov from the position of the Head of the SBU, basically giving the First Deputy Malyuk, who is Tatarov’s man, the opportunity to manage this entity.” Yaroslav Yurchyshyn, the MP from the “Holos” faction, adds another reason for Bakanov’s removal.

Due to the fact that the SBU is a military organization, Bakanov was removed as a military man, with reference to Article 47 of the Disciplinary Charter of the Armed Forces of Ukraine. The article is very serious — “Improper performance of official duties which resulted in human casualties or other serious consequences or created a threat of such consequences.”

Andriy Smyrnov, Deputy Head of the Office of the President explained that Bakanov and Venediktova were suspended so that they would not interfere with the investigation. What could they be facing if the accusations are confirmed? Most likely, Bakanov will simply leave his post and that will be the end of it. 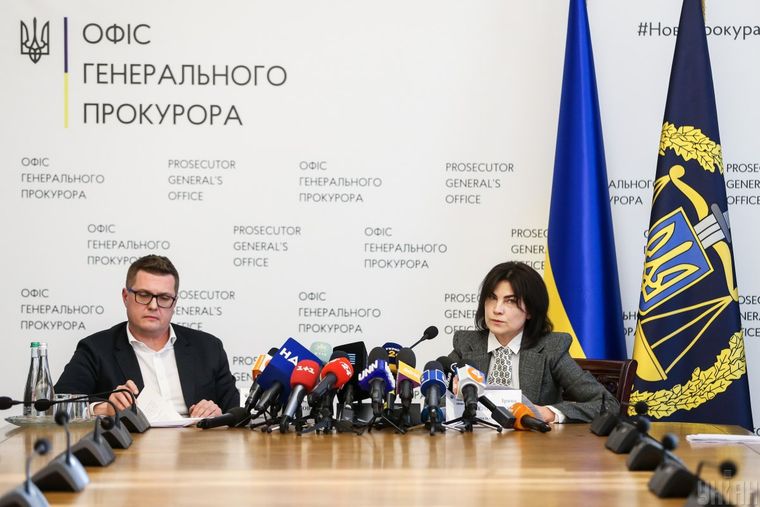 Ivan Bakanov and Irina Venediktova during a briefing in Kyiv, May 11, 2021

Irina Venediktova was silent for a whole day after the publication of the presidential decree. Only on the evening of July 18, she wrote a post on her Facebook page with a hint that she would consider the dismissal legal only if MPs voted for it, and called this method of suspension “behind the scenes”:

“If the corresponding resolution is registered in the walls of the Ukrainian Parliament, I will not hesitate for a second and will report to the people’s representatives. I cannot and do not intend to argue with the opinion or decision of the President — the President has the right to make decisions, including those discussed now. The procedure for dismissing the Prosecutor General is well known to everyone, there is no other one that would be provided for by the legislation”.

So far, this post is the only Venediktova’s public reaction to the suspension. According to “Dzerkalo Tyzhnia”, on July 18, Venediktova was at her workplace and called a meeting, where she informed employees that she was going to continue to perform her duties and receive a salary.

“They have long been dissatisfied with Venediktova because she did not get involved in clearly political investigations, in particular, she wasn’t proactive in Petro Poroshenko’s cases. In fact, when there was a need to sign politically motivated proceedings, Venediktova was either on a business trip or on vacation, and these files were signed by her First Deputy Symonenko, who eventually took over her duties,” explains the MP from the Golos faction Yaroslav Yurchyshyn.

Was it legal to suspend her?

Venediktova was suspended by the President under the law “On the Legal Regime of Martial Law”. On May 12, the Rada amended it and granted the President the right to remove officials whose appointment falls within his authority during martial law.

Andriy Osadchuk, MP from the Golos faction and member of the Verkhovna Rada Committee on Law Enforcement, believes that the removal of Venediktova and the dismissal of Bakanov raises questions: the Constitution does not grant the President such powers, and a complete dismissal should take place through the Verkhovna Rada.

“The provision of the Law on Martial Law cannot cancel the Constitution. The list of the President’s powers is finite. If the President wants to dismiss the Prosecutor General or the Head of the SBU, I salute this. But the way it is suggested to be done looks strange and can be harmful. After all, we live in a parliamentary-presidential republic. If we ignore the Parliament and the mechanisms provided for in the Constitution, it will not do any good,” warns Osadchuk.

But Andriy Tryhub who holds a PhD in Law does not agree with him. The lawyer believes that given the war, presidential decrees are valid.

“Is the President the official who submits proposals on appointments and dismissals? Yes. Are the procedures under martial law different from civilian ones? Obviously, yes. Could the Constitution provide for everything down to every letter? Obviously not. Therefore, I think these decrees cannot be considered obviously illegal.” — explains the lawyer.

However, shortly after the suspension decrees, the President submitted to the Verkhovna Rada a proposal on the dismissal of Bakanov and Venediktova. The Parliament supported these proposals.

Are Tatarov’s friends rushing to the rescue?

Zelensky appointed Vasily Malyuk, Bakanov’s First Deputy, an acting Head of the SBU. Ukrayinska Pravda journalists noticed Malyuk at the birthday party of Oleh Tatarov, Deputy Head of the Office of the President.

Anti-Corruption Action Center thinks that it was Symonenko who made Tatarov’s case disappear, whom the National Anti-corruption bureau (NABU) suspected of complicity in giving a bribe. Symonenko took the proceedings from the NABU, handed them over to the Security Service and suspended the prosecutors of the Specialized Anti-Corruption Prosecutor’s Office (SAPO) from the investigation. Tatarov’s case was investigated by NABU detective Oleksandr Klymenko: he won the competition for the new Head of the SAPO last year, but he has not been approved yet. The Competition Commission for the position of SAPO management should meet again on July 19 and finally approve the winner. MP Yaroslav Yurchyshyn notes that after being approved by the Commission, the SAPO Head should be designated by the Prosecutor General, and not the acting Prosecutor General, otherwise it may create preconditions for appealing the decision in the courts.

“On the one hand, Tatarov, who has been blocking the competition, agreed to finalize it for Mr. Klymenko to become the winner, but at the same time he got his man to be acting official, who either will not sign (Klymenko’s designation — ed.), referring to the fact that this is not part of his duties, or will sign it and thereby leave the SAPO Head 'in suspense',” Yurchyshyn sums up.

Meanwhile, both journalists and activists warn : candidates appointed as acting Prosecutor General and acting Head of the Security Service actually create Oleh Tatarov’s and Andriy Yermak’s monopoly on law enforcement agencies. And it is still unclear whether Zelensky will propose the candidacies of Malyuk and Symonenko to the Verkhovna Rada, so that the parliamentarians cancel the part “acting”.