Tamas Bodoky, a Hungarian investigative journalist and the executive director at Atlatszo, talked to Hromadske's Nataliya Gumenyuk to explain the ever-intensifying corrupt practices of the Hungarian Prime Minister Viktor Orban and his clique.

Bodoky said that the European Union, although has a system of check in theory, has "no efficient means to enforce its values on the member states", hence Hungarian PM Viktor Orban can help his close associates to use public funds and engage in embezzlement, all under the state-sponsored propaganda of how "Brussels aims to destroy Hungary".

The Government and Conquering the Media

Bodoky notes that Viktor Orban-led government in Hungary is trying, via their associates to "buy up" the media "to turn it into the government propaganda". Hence, as the expert notes, it is becoming ever-harder to keep the government accountable and to report on the corruption in the country.

However, Bodoky emphasizes that nevertheless, Hungarian independent media still manages to publish "powerful stories", for instance, on the son-in-law of Orban.

The Son-in-Law Story and Misuse of E.U. Funds

Bodoky tells Hromadske, that Viktor Orban's son-in-law owned a company, which was "highly successful in European Union tenders". These were about changing the public lights in cities and villages in Hungary, where municipalities were led by Fidesz, the ruling party.

"They made tens of millions of euros on this business. The European [Union] Anti-Fraud Agency started to investigate and it turned out that the tenders were biased, there was no competition, and the quality of what they provided was poor."

According to Bodoky, now Hungary has to repay 40 million euro to the E.U. because of Orban's son-in-law. However, he is not investigated officially and not being prosecuted.

Bodoky also tells about the childhood friend of Orban, who, through the embezzlement of the E.U. funds became a billionaire and the wealthiest business man in Hungary, being just a small business owner before. His wealth reportedly comes from various European structurally-funded tenders.

In the wake of the European migration crisis in 2015, the Hungarian government started to demonize the migrants, especially the poor ones, according to Bodoky.

Orban government put up billboards, that "migrants are going to steal are jobs and the migrants are associated with terrorism, are generally very dangerous". According to the expert, this has been a campaign of fear-mongering. 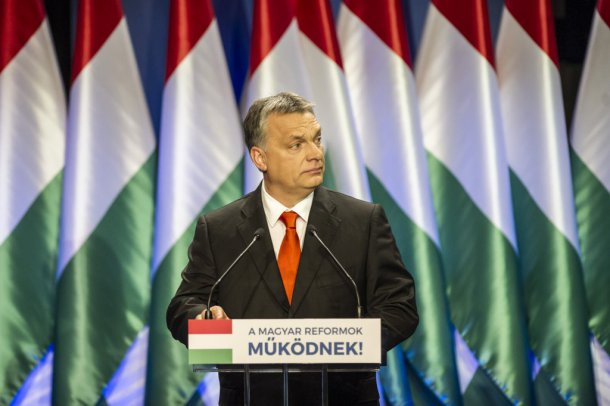 Enemies and Resemblance to Russia

Bodoky says that Hungary resembles Russia and the Putin regime, in trying to make the West as an enemy in the public view.

"We are in the E.U. and NATO, but the government is waging against Brussels. They are picturing Brussels as an imperialist force, which wants to conquer Hungary".

In pushing such agenda, the government organizes smear campaigns against independent journalists. Bodoky tells us that Hungary has also changed the freedom of information law, by making it more difficult for the journalists to access information on public officials.

"Now you have to pay if you wish to receive any information from them [state organizations]".

Bodoky also says that foreign-financed NGOs, which may be critical of the government, are being chased and closed in the country.

Accountability and the EU

Bodoky says that right now there is many discussions within the E.U. on how to deal with Hungary not following the principles it adhered to when it was accepted into the Union in 2004.

"A lot of experts say that in this current shape Hungary wouldn't be allowed into the E.U. and the E.U. should do something to make the government respect European values," Bodoky notes.

He adds that "unfortunately, the E.U. has no efficient means to enforce its values on the member state if the government is not cooperative".

Bodoky goes on to tell us about the investigation by his organization that was done last year. He said that during the investigation they found out about the luxurious private jet, which was used by PM Viktor Orban himself, and his associates very often.

He said one of their goals is to demonstrate to their audience of what the results of such government are, where the money of the ordinary people are being spent.

"There is [also] a yacht in the Adriatic [Sea], which is also very luxurious and the plane sometimes brings the people to the yacht, then they go to the yacht on the Croatian seashore."

Bodoky explains this has been a big scandal in Hungary, mostly because the people could see with their own eyes the pictures and videos of the luxury items. Hence, they were able to see what is going on with their tax money.

"If you look at the [tax] declarations, everything is good and no one is rich. Orban himself has barely any assets. But when you go to these secret places and take pictures of what they are using, then that tells a very different story".

Hundreds Of Refugees Strike to Demand Passage Through Hungary
1819
World

What Europe Can Expect From The Rise Of American Traditionalism