“I’m the Change”: What It’s Like to Be Feminist in Moldova, Armenia, Ukraine, and Russia
32370

“There were lots of birds in my yard. They began to fall before the thirteenth, they were lying around in the ally. And then the smog got stronger, I was hit with it myself. And [then] it began – flocks of birds began to die on the boulevard.”

The industrial town of Segezha in Russia’s far northern region of Karelia was overcome with the familiar smell of rotten eggs on the morning of November 13, 2019. It was the usual scent of hydrogen sulfide, coming from one of the country’s largest pulp and paper plants. It wasn’t until the next day when the snow turned yellow and birds began falling from the sky that locals realized something was amiss.

Then, on the afternoon of November 18, 2019, a fetid fog descended on the city. After this second surge of smog, eco-activists connected the discolored snow and dying birds to the smell of hydrogen sulfide and the emissions from the Segezha Pulp and Paper Mill.

Like many of Russia’s industrial towns, Segezha was developed during the Soviet period as a “single-industry city,” making the local pulp and paper mill the main employer and source of income for local residents. Last year, Segezha marked its eightieth anniversary, but the town is in many ways struggling to survive because the plant has such a devastating environmental impact.

And Segezha isn’t the only town struggling with the toxic effects of pollution. Environmental degradation has become dire across Russia and this has, in turn, spurred the growth of a countrywide environmental movement.

The Shiyes station in the northern region of Arkhangelsk is considered ground zero for Russian eco-protests. Here, environmental activists have been living in the forest for over a year and a half to prevent the construction of Europe’s biggest landfill, which is meant to take in 500 thousand tons of garbage from Moscow annually.

The area around the Segezha Pulp and Paper Mill smells like wet cardboard. The snow has melted and you can hear birds singing. They circle in flocks in the distance, disappearing in the clouds of thick white smoke coming from the mill’s chimneys.

“It smells here, from the plant, of course. But any plant gives off some kind of emissions,” a local bus driver tells Novaya Gazeta. “I didn’t see the yellow snow only yellow stems falling from the larch [trees]. And the birds, as far as I know, it was just cars crushing [them] when it froze – they were going to the heating ducts.”

Evidence of the environmental fallout was all over social media last month, as the people of Segezha posted photos of the dead birds and discolored snow. The hashtag, #СЕГЕЖА_ЗАДЫХАЮСЬ_ТРАВЛЮСЬ – which translates as “Segezha, I’m suffocating, I’m being poisoned” – also appeared on the social networking site VKontakte (the Russian equivalent of Facebook).

One woman even started a petition on change.org titled “Segezha Plague” – and it has nearly three thousand signatures at the time of this writing (Segezha has a population of about 27,000 people). 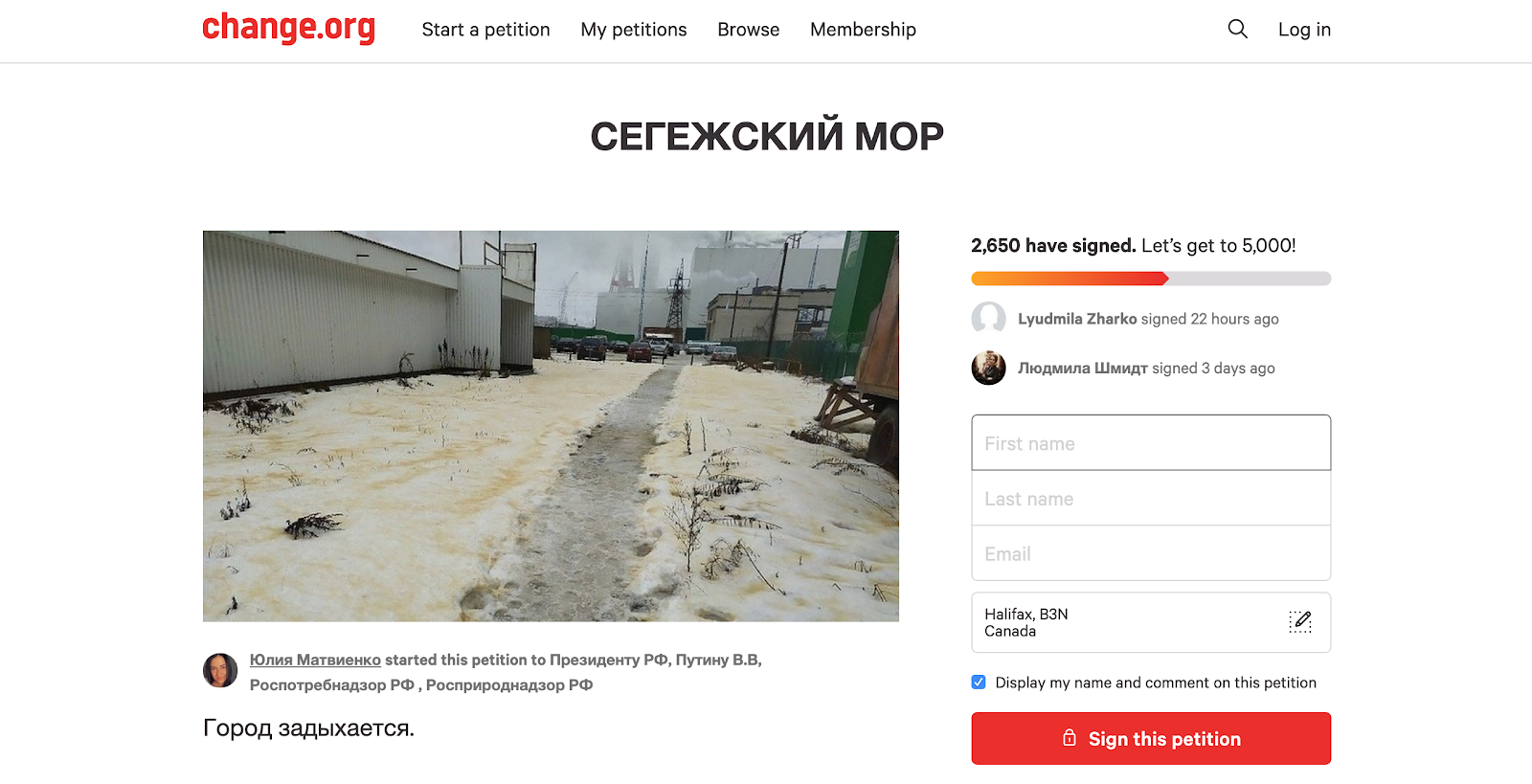 But not everyone is convinced. Local officials ran several tests and claimed that they turned out fine. In town, one young man tells Novaya Gazeta that the plant has nothing to do with the dead birds:

“The birds fall because the climate is changing, due to the weather. They get confused, collide and fall. This is verified information – every year on this day this happens in Segezha,” says the local, named Vlad. He could not explain where he got this information.

The disinformation campaign has also appeared online alleging that photos of the yellow snow were faked and doctored. This was, however, quickly debunked, in a group effort by local social media users.

– Did you really have yellow snow and birds falling here?

They turn around and answer cautiously:

Natalya Toropova finds a dead bird near her home. She has lived in Segezha her entire life, but this is the first time she has seen birds falling from the sky. She grabs the bird by its tail, holds it up and shines a light on it using her cell phone.

"There were lots of birds in my yard. They began to fall before the thirteenth, they were lying around in the ally. And then the smog got stronger, I was hit with it myself. And [then] it began – flocks of birds began to die on the boulevard,” Natalya recalls.

“Many of the neighbors collected comatose birds and took them home,” she continues. “And [what] if it’s an infection? They were in contact and there could be an outbreak here.”

As it turns out, Russia has recently seen dozens of birds die-off in other regions, like Kaliningrad and Ryazan, as well. Experts are claiming the birds could have been poisoned by pollution, wrote Associated Press journalist, Maria Antonova, on Twitter.

Russia is having some kind of bird apocalypse - a die-off of swans in Kaliningrad, and dozens of birds dropping dead in Ryazan. In both cases, experts cite poison, possibly from pollution. I like this picture of survivors in baby carriers at a local animal rescue. pic.twitter.com/argFVMEMss

Natalya hides the bird in an opening in a concrete slab, so she can send it to St. Petersburg for analysis. Locals activists want to do an independent investigation and organize a fundraiser for an independent analysis of snow samples, as well.

“She’s got me sick of the garbage. Now with this plant,” says Raisa Guryanova, the grandmother of eco-activist Natalya Pastushenko. “And all the pigeons here died, that didn’t happen, of course. This is scary though. First the birds and then us? The grandmothers [and] grandfathers and then the youth?”

Natalya lives with her 85-year-old grandmother in a modestly furnished one-room apartment. The curtains are shut tight and there’s a jar of yellow water from the tap sitting on the windowsill.

Natalya took a job at the Segezha Pulp and Paper Mill in 2011. But after a few months the private security company she worked for broke its contract with the mill and she was left without work.

She founded the “Karelia Against Garbage” group on VKontakte in the spring of 2019 – when the authorities decided to build a landfill near Segezha. With the help of other eco-activists and local residents, she convinced the government to build the landfill somewhere else.

“When it ended, I calmed down. And then this toxic emission surge [happened]. And I joined the fight again,” Natalya says. “The birds fell on [their] heads, it was really scary. On November 13 and 14 I didn’t leave the house, I couldn’t breathe,  I’m coughing up until now.”

In addition to problems with air quality, Segezha has consistent problems with the tap water; it’s yellow in color and unsuitable for drinking. People get their water from a spring at a park on the outskirts of the city. Now, local eco-activists want to have the water independently tested for hydrogen sulfide content, as well.

“I want to live normally and not suffer,” Natalya says, in sum. “We are not demanding the closure of the plant, we are only demanding the installation of filters. I am outside of politics and I understand that if the plant closes, the city will die.”

“There are neither prospects, nor interests, nor work.”

Elena works in a kindergarten and is the wife of a plant worker at the Segezha Pulp and Paper Mill. She claims not to have seen the dead birds and yellow snow.

“I’ll tell you a secret,” she says. “In my group, there are children aged three to four years old, they eat snow on their walk – and everyone is alive.”

Meanwhile, Elena’s husband says that in the morning there is often a yellow coating on his car due to the high sulfate content in the air. Whether or not the plant is giving off toxic emissions during the night he could not say. And he agreed to be interviewed only on the condition of anonymity – for fear of being fired:

“Many of the workers are unhappy. The salaries are lower in the last year or two. The bosses are almost all outsiders,” he tells Novaya Gazeta. “Before there was a pioneer camp [children’s summer camp – ed.] in Crimea, a tuberculosis prevention clinic, some benefits, but now there is none of that.”

But residents of Segezha have few options when it comes to employment.

“If the plant closes – that’s it, you can pack your things,” the plant works says. “This is a city of pensioners already. There are neither prospects, nor interests, nor work.”

No Desire for Change

One local Deputy (who asked not to be named “because of possible problems”), says that on November 13, 2019, the people of Segezha were very scared.

“The plant workers said there was a toxic emission at the facility. What kind of toxic emission, no one said. They were ready to talk to journalists but then they refused,” he recalls.

That being said, this doesn’t address the persistent environmental problems in the region. Although the anonymous Deputy claims that the plant is investing in the town’s development, there has been an excess of hydrogen sulfide in the tap water since 2016 and the authorities have admitted in the past that the water quality is not up to code.

“Now I am afraid that the plant will go to court because a lot of people are blaming it,” the anonymous Deputy says. “I’m scared for the people: going up against this kind of monster is scary. And not a single political party is standing up [for them].”

/Translated and abridged by Eilish Hart. With materials from Sergei Markelov of Novaya Gazeta. Courtesy of the Russian Language News Exchange.