Germany delivers almost no weapons to Ukraine in 9 weeks, despite promises — Welt
5028

“Our Kids”: Crimean Resistance to Political Arrests In Numbers
8381

The khaki truck column drives down the empty Italian highways. The military "KAMAZ" trucks have Russian flags and stickers reading "From Russia with love". That’s the name of the Kremlin initiative to send aid to Italy, a country which has greatly suffered from the coronavirus outbreak. However, it is more of a special operation aimed at striking the EU and NATO, and returning the issue of lifting sanctions against Russia back to the agenda.

The Incredible Adventures of Russians in Italy

The first IL-76 military aircraft from Russia landed on the evening of March 22 at the Pratica di Mare military base southwest of Rome. The Russians were greeted by high-ranking Italian officials led by Foreign Minister Luigi di Maio. Despite the severe quarantine measures and a ban on close contacts introduced in Italy, the Russian military are hugging, kissing and shaking hands with the Italians.

15 military aircraft arrived in Italy, which brought cargo and specialists. The official goal is to help Italy overcome the outbreak. According to a report by the Russian Ministry of Defense’s website, more than a hundred experts were sent to the Apennines, as well as medical equipment, "mobile disinfectants, mobile laboratories for the diagnosis of viral diseases".

On March 21, Italian Prime Minister Giuseppe Conte and Russian President Vladimir Putin agreed on Russia's aid in a telephone conversation. On March 25, a column of 22 Russian "KAMAZ" trucks went from Rome to the north, to Bergamo, the city most affected by COVID-19.

Photos with the Russian trucks, triumphantly moving through the territory of a NATO member state, have been widely distributed by the Italian, Russian and international media. In Italy, they were often accompanied by comments that Russia, unlike the West, "did not leave the Italians in a difficult moment."

However, very soon, it began to seem like a detective story.

"80% of Russian Aid Is Unnecessary"

On March 25, while the Russian trucks were heading to Bergamo, the Italian newspaper La Stampa, citing its own high-ranking sources among the Italian authorities and the General Staff, reported that most of the Russian aid that came to the country was no good: "80% of what Russia sends is absolutely unnecessary, or little needed for Italy. In short, it is nothing more than an excuse."

And excuse for what? For a large-scale operation or PR and influence. And maybe intelligence.

Unlike China, which sent current pandemic deficits – masks and artificial ventilators – Russia has sent mobile laboratories for sterilization and equipment for the disinfection of rooms and streets, La Stampa reported. At the same time, Italy’s Higher Institute of Health considers street disinfection an ineffective measure in the fight against the spread of coronavirus.

The Russian "aid" operation is managed by the Russian Ministry of Defense, not the Health Ministry. According to La Stampa, the personnel arriving in Italy are "generals, colonels, majors, colonels-general, who were previously involved in military operations in Africa, where bacteriological warfare was combined with Russian intelligence operations."

The Russian delegation includes military doctors and virologists. It is headed by General Sergei Kikot, who in 2019 argued in front of the International Organization for the Prohibition of Chemical Weapons, claiming that Syrian President and Russian ally Bashar al-Assad does not use chemical weapons, despite copious evidence. He is an expert in the control of anthrax. Other high-ranking officials are Colonel Gennady Eromin, a bacteriological warfare expert and swine flu researcher, Colonel Vyacheslav Kulish, an expert on Ebola and plague.

According to the Russian Ministry of Defense, some of these experts were intended to assist elderly Italian patients with COVID-19 in 65 different nursing homes, and others to deal with the disinfection of "health facilities and urban infrastructure, including public transport."

Yaroslav Makeev, a Russian truck driver and mechanic, said this in a comment to the Russia 24 TV channel: "The machine sprays an aerosol solution prepared in advance, and this solution, in turn, kills the pathogen, in this case, the coronavirus."

Residents of Bergamo and neighboring cities of Lombardy are concerned about these military plans and are demanding local authorities to explain what exactly the Russians will spray, especially given the position of Italian experts on the ineffectiveness of street disinfection. 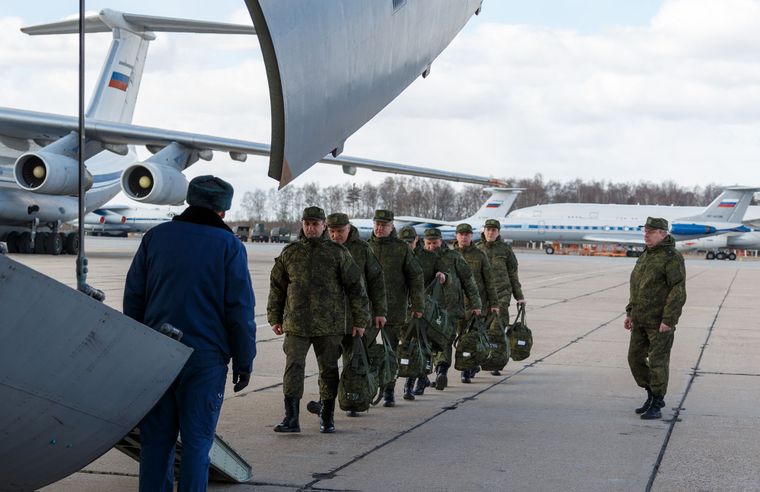 Giant planes arriving at the Italian Air Base during a live broadcast, a column of military trucks going 600 km north escorted by TV cameras instead of landing at Bergamo Airport -- all of this looks like a large-scale Russian propaganda operation that has several goals.

First, the strengthening of Russia's geopolitical influence in Italy and the region. According to General Marco Bertolini’s comment to La Stampa, “the region of the eastern and central Mediterranean is a bridgehead for the struggle for hegemony, from Syria to Libya. We must avoid having a crisis of a sanitary nature turn into a political-military operation. If they offer us help – well, but we also need to outline certain boundaries.”

Secondly, that is how Russia sows discord within the European Union and NATO and reinforces the rhetoric already present in Italy that the true friends of this country are not Western partners, but Russia and China.

"Russia is demonstrably assisting with equipment that Italy does not need, just when the E.U. countries have lost the moment to show solidarity," said Sergiy Korsunsky, Director of the Diplomatic Academy at the Foreign Ministry of Ukraine.

Italy is home to the fifth-largest U.S. military contingent in the world, and Russian military trucks in Italian territory is a demonstrative challenge to fragile transatlantic unity.

"This is a mission led by the Russian military, so I think it's also the idea of ​​'humanizing' the Russian military. In general: a comprehensive information warfare operation," Ukrainian diplomat and ex-minister of foreign affairs Pavlo Klimkin said in a comment to hromadske. 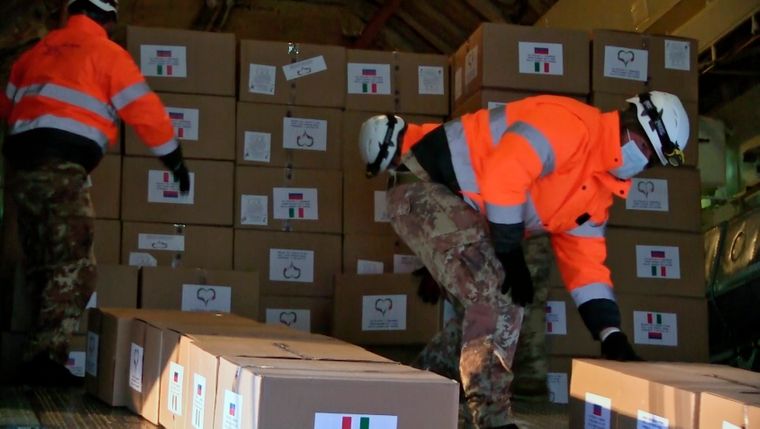 On their arrival in Italy, the Russian soldiers were quartered in the barracks of the General Staff of the Armed Forces in Rome, where they posed for pictures examining a map of Italy – an image that would have been hard to picture before the pandemic. And despite the fact that Prime Minister Conte, after criticism, hurried to confirm that Italy was still focused on the West and that the aid was not given under Putin-set conditions, not everyone was assured.

Thirdly, thanks to the PR program of “saving Italy”, Russia is trying to set the agenda of the day to include the lifting of sanctions. The Italian authorities headed by PM Conte, officially share the E.U’s position on upholding sanctions against Russia. But inside Italy, calls for their removal can often be heard, especially from the far-right party Lega, led by Matteo Salvini.

Russian diplomats are trying to use the pandemic in their own interests, arguing that the sanctions should be canceled as a sign of solidarity in the fight against the global threat of coronavirus.

And the Italian operation may help with that, thinks Klimkin: “This PR is needed to create a public belief that Russia is together with Italy even in hard times. This will later help remove sanctions, as a wave of 'sanctions against Italy’s friends continue' will be inspired by the media and social networks.”

Fourth, this is an attempt by Russia to meddle in Italy’s domestic affairs, especially by helping pro-Russian political movements in the country, such as Lega, which in the summer of 2019 stopped being a member of the ruling coalition. But its ambitions to return to power haven’t faded.

As Paolo Grimoldi, an MP from Lega, stated, he was the author of the idea to ask for help from Russia. He says that on March 10, he passed along this request through a colleague in the far-right German party Alternative für Deutschland (AfD), Ulrich Oehme, who then passed it to Russian MP Leonid Slutsky, who in turn passed it along to Putin.

The Russian prepared trucks, soldiers, and stickers with Italian flags – the only thing left was to formalize the request. That’s why it wasn’t surprising that the first planes from Russia landed in Italy on a day after a conversation between Conte and Putin.

Korsunsky believes that this way, Russia is trying to support Lega, which has ruled Lombardy for decades – but now is unable to stop the spread of the pandemic.

Fifth, the Russian mission of military experts on infectious diseases probably has an intelligence aim, writes the Italian media.

The Russians can collect biomaterial and data from the biggest epicenter of the coronavirus in Italy, in order to prepare for an outbreak in Russia. Korsunsky believes that Russia is trying to get access to the most important and knowledgeable Italian doctors in the fight against the virus.

“The pandemic is starting in Russia, and China is probably not burning with a desire to help its strategic partner, which instead of helping closed its borders with [North Korea] and started to surveil Chinese citizens in Moscow and Saint Petersburg. Xi Jinping has expressed his displeasure to Putin about this matter,” noted Korsunsky.

That’s why the Russians went to Italy, which has become the European center of the pandemic so far.

/ By Olga Tokariuk, translated by Vladyslav Kudryk and Romeo Kokriatski