In the spring of 2019, Russia sent hundreds of "operators" to Venezuela to support the regime of Nicolás Maduro, on whose resignation the United States insisted. At the same time, Moscow made it clear to Washington that they were ready to end their support for them, but only in exchange for Ukraine.

"The Russians [...] were signaling very strongly that they wanted to somehow make some very strange swap arrangement between Venezuela and Ukraine: [...] You want us out of your backyard [...]We have our own version of this. You're in our backyard in Ukraine. And we were getting that sent to us, kind of informally through channels. It was in the Russian press, various commentators,” says Fiona Hill at the U.S. Congress.

A former intelligence officer and later a diplomat, she served as the Senior Director of the U.S. National Security Council specializing in Russian and European affairs for the last two years. On November 21, Hill testified publicly in Congress as part of an investigation into the impeachment of President Donald Trump. And on October 14, the diplomat spoke at a closed session of Congress. The transcript of the speech was published on the website of the Intelligence Committee.

Hill refutes the conspiracy theory that Ukraine interfered in the U.S. presidential election in 2016, and defends the former U.S. Ambassador to Ukraine Marie Yovanovitch. In addition, Hill explained why she was pedaling a meeting between Volodymyr Zelenskyy and Vladimir Putin this spring and, on the contrary, insisted that Zelenskyy and Trump meet after the parliamentary elections in Ukraine.

The diplomat calls Trump’s and his lawyer, Rudy Giuliani’s comments about Ukraine’s interference a "meta-alternate narrative". During her speech in Congress, she stressed that she considered Trump’s assertions that it was Ukraine, not Russia, that in 2016 interfered in the U.S. presidential election “a conspiracy theory”. After that, she would sum up: "The Ukrainian Government did not do that. The Ukrainian Special Services also did not interfere in our election."

Congressmen also questioned her about the role of the former MP Sergii Leshchenko in the publication of the Party of Regions’ “black ledger”. Among other things, there was the payment to the political technologist Paul Manafort, who at the time worked for Viktor Yanukovych. In 2016, Manafort briefly headed Trump's election campaign HQ, but was later fired, and subsequently detained by law enforcement. In March 2019, the court found him guilty of conspiring against his country, money laundering, and tax evasion. Manafort was sentenced to 7.5 years in prison.

In response to the question about whether or not she considers the fact of the publication of the "black ledger" an interference in the U.S. elections, she recalled that in 2019, Ukrainian PGs (Yuriy Lutsenko and Viktor Shokin – ed.) accused Yovanovitch of corruption, however, unlike Manafort, no criminal proceedings were instituted against her in the United States, because the information was untrue. On the other hand, Manafort received a court conviction.

Hill explains that after the inauguration of the Ukrainian president in June 2019, she, along with the National Security Advisor John Bolton, did not pedal Zelenskyy's meeting with Trump. Hill believed that this should only happen after the formation of the government, and possibly even after the elections to the Ukrainian Parliament.

"The one question we had was really whether he (Zelenskyy – ed) would be able to act independently," Hill said. She described oligarch Ihor Kolomoisky to the Congressmen as a person suspected of embezzling U.S. taxpayers’ money from a bank, which was later nationalized (PrivatBank – ed). 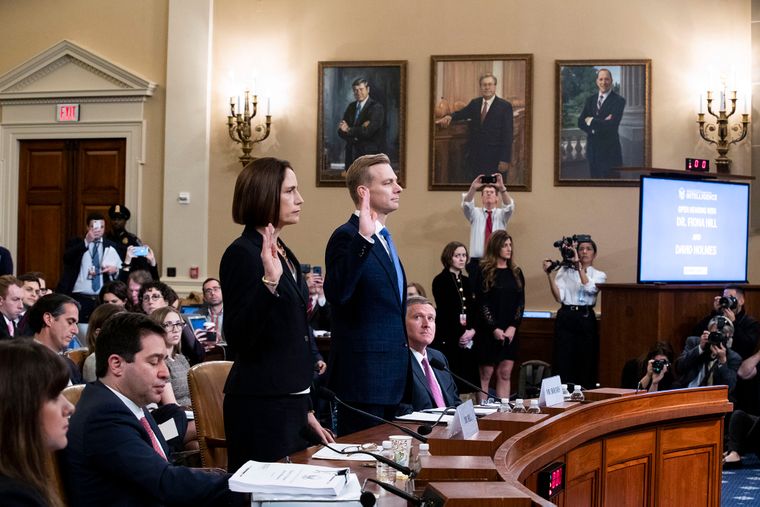 The greeting letter Zelenskyy received from Trump on May 29 was prepared by Alexander Vindman – a subordinate of Hill. But the sentence in which Trump invited a Ukrainian colleague to the White House without specifying a date, according to Hill, was added to the final text by Trump’s chief of staff Mick Mulvaney.

Hill explained that she understood that there was a parallel channel of communication with Ukraine that neither the National Security Council nor the State Department knew about. Earlier, the U.S. Chargé d'affaires ad interim in Ukraine, William Taylor, testified that the channel included U.S. Secretary of Energy Rick Perry and Special Representative on Donbas Kurt Volker in addition to U.S. Ambassador to the E.U. Gordon Sondland. Their work was coordinated by Trump's lawyer Giuliani. Together, they sought to make Zelenskyy publicly announce that Kyiv would investigate “Joe Biden's activities” and the so-called “interference in the 2016 U.S. election”.

Sondland, who made a generous contribution to Trump's election campaign, decided he was "U.S. ambassador to all countries in Europe, but also responsible for Ukraine." Hill and Sondland even had quarrels, and when asked by Hill, "On whose authority?" He said, "The President."

Hill had a lot of criticism about Sondland – he gave her cellphone number to foreign politicians who came to the White House. But most importantly, he used unsecured communication. Most of all, Hill feared that his communications could be intercepted by foreign agents, in particular, Russian intelligence services.

During a congressional hearing, Sondland said he did not consider the information he was discussing with the President of the United States in open communication, secret or of value to other states’ intelligence services.

The Meeting that Never Was

In the spring and early summer, Hill met several times with representatives of Russia and discussed the issue of resolving the conflict in the Donbas. Firstly, in between the two rounds of the election campaign in Ukraine, she visited Moscow. Then, after Zelenskyy was elected president, at a trilateral meeting in Jerusalem, Hill urged Moscow "to take a different approach." She explained that the Russians create "lifelong enmity with an otherwise fraternal country, people who've been close to them [...] for hundreds of years of history, and that, you know, they would be well-served to not be just so punitive with the Ukrainians."

According to Hill, the Russians were expecting to have as many cards on the table as possible. This also concerned the end of the Ukrainian elections and the detention of Ukrainian sailors, whom the United States tried "to push the Russians to release." In her opinion, Russia's interests were in relation to things that were already understood: that Luhansk and Donetsk should have a veto over Ukraine's foreign policy and particularly its ability to become NATO and E.U. member in the future.

The U.S. insisted that Putin may start building different relations with the new president of Ukraine – Zelenskyy:

"The Russians were saying that Ukraine was being run by a fascist government and one that was also hostile to Russian speakers. WeI1, Zelensky is a Russian-speaking Jew from basically eastern Ukraine. All of his family ties are in Russia. He'd spent an awful lot of time in Russia. He can neither be described as a fascist or as somebody who is hostile towards Russia or Russian speakers. And they couldn't argue with that. And, basically, the point was, you know, this is a time for reassessment."

Ultimately, Zelenskyy did not meet Putin face-to-face. The first time could be on December 9 at the meeting of leaders of the Normandy format countries in Paris.

The diplomat also said she supported Trump's idea that Zelenskyy should speak to Putin directly. In her view, such negotiations are much more successful because there is a limit to what international negotiators can do, and often their main task is to force the leaders in the conflicting countries to agree among themselves. 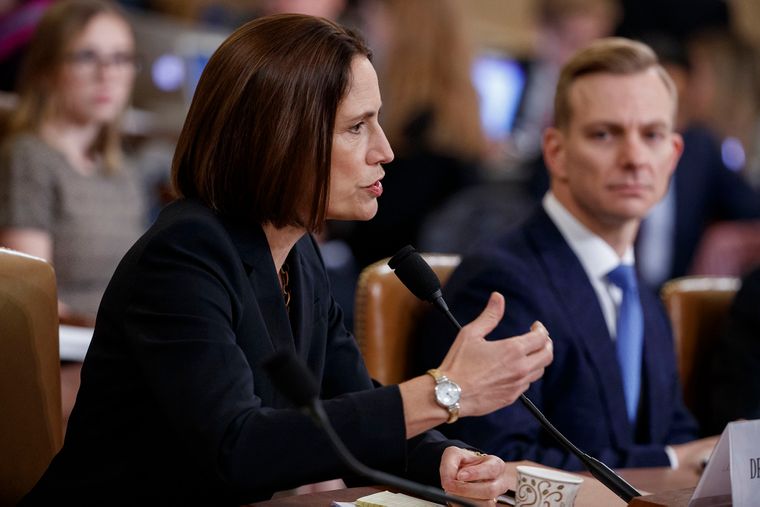 Hill drew attention to another "operation" that Igor Fruman and Lev Parnas, the so-called Giuliani’s proxies in Ukraine, tried to carry out in Ukraine. According to the diplomat, at the end of May 2019, she was contacted by Amos Hochstein, a former U.S. Envoy for Energy who is now a member of the Supervisory Board at Naftogaz of Ukraine. According to Hill, Hochstein noted that several Ukrainian officials had complained to him about pressure from Giuliani. He also mentioned the names of Fruman and Parnas. There was alleged pressure to change Naftogaz's supervisory board.

Hill said she "was aware" that during an investigation by the Special Counsel Robert Mueller over Russia's interference in the 2016 U.S. election, Ukraine "allowed Kilimnik to slip across the border to Russia" – Manafort’s man in Kyiv, whom many consider to be a Russian agent.

According to Hill, U.S. diplomats were extremely cautious and feared that Russia could intercept any communication. Hill recalled that in 2014, the State Department had already gotten caught up with a conversation between Assistant Secretary of State Victoria Nuland and Ambassador Geoffrey Pyatt. Then the diplomats discussed among themselves the then-PM Arseniy Yatseniuk. Subsequently, the Russians published the conversation as evidence of the Americans' direct control over the Ukrainian opposition.

No one wants to deal with Lyashko or Tymoshenko