13 people killed, over 60 houses damaged in a day In Luhansk region as a result of Russian shelling
Editors' Choice
13667

“I’m the Change”: What It’s Like to Be Feminist in Moldova, Armenia, Ukraine, and Russia
31631

A substantial part of the Russian occupation forces are withdrawing from Mariupol. U.S. President Joe Biden has reacted to Russia's suspension of gas supplies to Poland and Bulgaria. Here's what you may have missed from the night of April 29.

The Pentagon said that a significant part of the Russian occupation forces began to withdraw from the Mariupol area and move to the northwest, towards the Zaporizhzhia Oblast.

"That doesn't mean that we assess that they have Mariupol. As I've said earlier, they are continuing to pound Mariupol with strikes, both airstrikes and missile strikes. You don't do that if you think it belongs to you," said a senior Pentagon official.

Germany has changed its mind and is now ready to support the European Union's initiative to impose an embargo on oil imports from Russia, provided that Berlin has enough time to secure alternative supplies. This was reported by The Wall Street Journal with reference to German officials.

According to WSJ sources, such changes in German policy increase the likelihood that EU countries will agree on a phased embargo on Russian oil — a solution may come as early as next week. All 27 EU governments must approve the ban.

At least one Ukrainian serviceman was killed and nearly 100 others were injured in an improvised infirmary at the Azovstal plant in Mariupol, which was attacked by Russian occupiers on April 28.

As a result of the shelling, part of the premises collapsed — in particular, the operating room, leaving more than 500 wounded and doctors blocked. Azov defenders stress that the shelling was intentional: the enemy aimed at the field hospital, and immediately after the air bombardment, resorted to the use of naval artillery.

Details of the shelling of Kyiv

Details of the shelling of Kyiv on the evening of April 28 emerged: according to preliminary information, 10 people were injured as a result of the strikes on a 25-storey residential building in the central Shevchenkivskyi district. The shelling partially destroyed the house, damaging the ground and first floors.

According to President Volodymyr Zelensky, Russian missiles struck the capital immediately following the talks with UN Secretary-General Antonio Guterres — after almost a fortnight without air strikes. 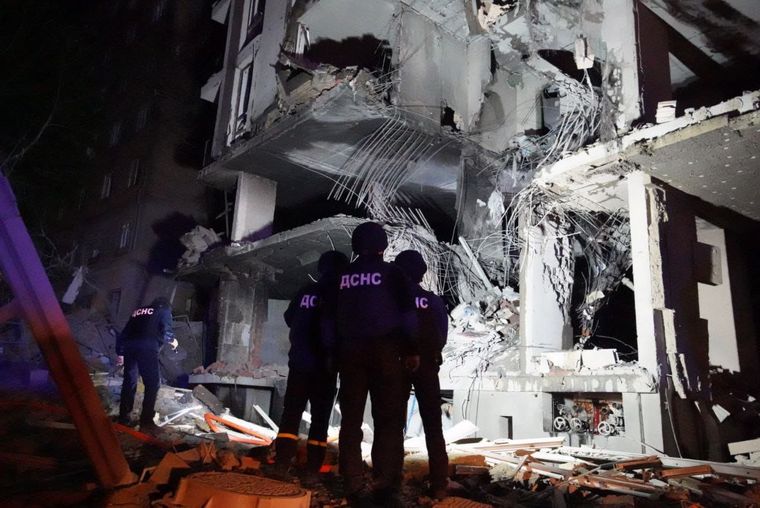 A house in Kyiv damaged in the evening of April 28 by Russian rocket fire. Photo: State Emergency Service

U.S. President Joe Biden has responded to Russia's suspension of gas supplies to Poland and Bulgaria: "So, let me be clear: We will not let Russia intimidate or blackmail their way out of these sanctions.  We will not allow them to use their oil and gas to avoid consequences for their aggression."

Biden stressed that the United States is working with other countries, including South Korea, Japan and Qatar, to help European allies, who are threatened by Russia with gas blackmail and meet their energy needs in other ways.

The Kremlin is considering a scenario of creating a quasi-formation called "Southern Rus" in the temporarily occupied Ukrainian territories. This is evidenced by the intercepted document, which was published by the investigative project "Schemes". It seems this scenario was devised on April 16 in Russia by the leadership of the ruling party "United Russia".

The document states that after the overthrow of the "legitimately elected president" in 2014, Ukraine "lost its legitimacy within the USSR" and the so-called "Southern Rus" is allegedly the successor to the Cossack proto-state Zaporozhian Sich of Taras Bulba (a fictional character of Nikolai Gogol) . Among other things, the Ukrainian language is called "dialect".

The United Kingdom will send about 8,000 troops to Eastern Europe for expanded military exercises. Tens of thousands of troops from NATO and the Joint Expeditionary Force will join the Britons. This will be one of the largest deployments since the Cold War.

The British Ministry of Defense said that the exercises were planned long ago, but decided to expand them in response to the Russian invasion of Ukraine.

Payments to Ukrainians from the UN

UN Secretary-General Antonio Guterres has said his organization is ready to pay cash to Ukrainians. This should be done in coordination with the Government of Ukraine.

According to Guterres, 1.3 million Ukrainians can receive payments by the end of May, and two million by the end of August. However, the official did not specify how much people will receive.