Ordnance explodes in a village in occupied Crimea. What is known?
Editors' Choice
9179

Will Ukraine Get Its Own Unified Orthodox Church?
26966

Russian occupiers hit a high-rise building and a recreation center in Odesa Oblast with rockets, resulting in casualties. The French president has promised to provide additional military aid to Ukraine. Here is what you may have missed from the past night.

At night, the Russian occupiers launched a rocket attack on a 9-story residential building in the Odesa Oblast, one entry section was completely destroyed. As a result of the attack, according to the latest data, 14 people died, another 30 were injured, including 3 children. Rescuers rescued 7 people from the rubble. Debris analysis is ongoing. 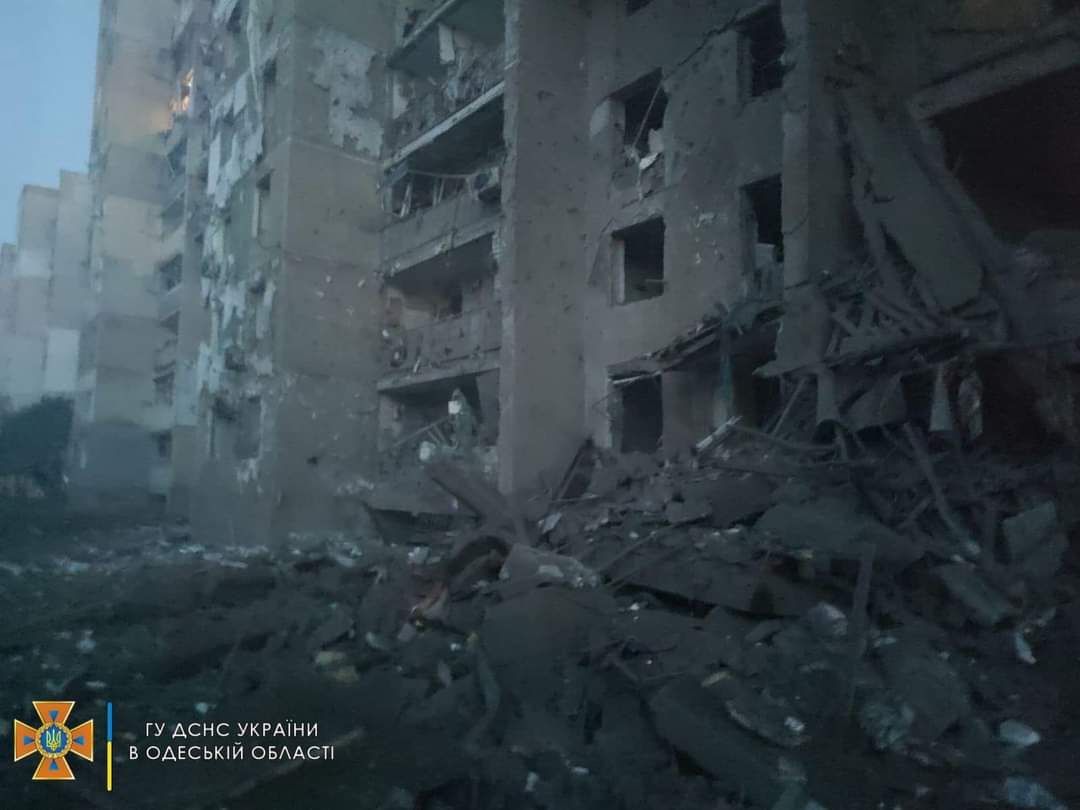 Consequences of a Russian rocket attack on a high-rise building in Odesa Oblast, July 1, 2022
Photo: SES

Another rocket hit a resort in the Bilhorod-Dnistrovskyi district of Odesa Oblast, killing three people, including a child, and injuring one more. The Russians fired from strategic aircraft from the direction of the Black Sea.

Another body found under the rubble in Mykolayiv

The death toll of the Russian missile strike on a residential building in Mykolayiv, which occurred on June 29, has increased to eight. Six civilians were also injured as a result of the attack. Rescuers continue to clear the debris.

How the Russians fled Snake Island

Operational Command "South" stated that the Russians, retreating from the Snake Island, destroyed their military equipment, documentation and property. In this, they were also "helped" by missile and artillery strikes of the Armed Forces of Ukraine. Besides, during the retreat, the enemy could have mined the territory and waters.

At the same time, analysts of the American Institute for the Study of War noted that the retreat of Russian troops from the island will reduce the pressure on the Ukrainian coast, but will not end the naval blockade.

Ambassador of the Russian Federation in Bulgaria Eleonora Mitrofanova has said that Moscow is considering the possibility of severing diplomatic relations with Bulgaria due to the expulsion of 70 Russian diplomats. "Moscow will take very decisive measures. This cannot go unnoticed. Diplomatic relations may be broken!" said the ambassador.

French President Emmanuel Macron said that his country will transfer to Ukraine six more new-generation CAESAR self-propelled howitzers and a "significant amount" of armored vehicles. According to Macron, the equipment will be delivered quickly.

In a separate post, the French president emphasized that NATO, the EU and the G7 unanimously decided to strengthen economic, humanitarian and military support for Ukraine. "Allies are fulfilling their obligations," Macron summed up.

On the southern front, the Armed Forces continue to launch missile and artillery strikes against Russian positions. In particular, in the Kherson Oblast, Ukrainian aviators carried out a double helicopter strike on a cluster of enemy personnel and military equipment.

On June 30, the Ukrainian military in the south destroyed 35 occupiers, two enemy modernized T-72B3 tanks and four more units of other armored vehicles.

The Defense Council of the Poltava Oblast has banned the sale and use of fireworks, firecrackers,  and other pyrotechnics for entertainment, as well as vehicles without noise absorbers. The ban will remain in effect until the end of martial law.

US blocks $1 billion of a Russian oligarch

In the US, a law enforcement investigation revealed that Russian oligarch Suleiman Kerimov used a range of relatives, advisers and opaque legal entities to invest in the United States. The oligarch's assets were blocked.