donate
Hromadske UAHromadske RU
AboutWhere to watchAuthors
Contacts
Ukraine
Respect and Support Instead of Tulips: The Participants of the Women’s March Speak Out Against Violence
1718
Trending
3718

A Hello to Arms: Is There a Black Market for Guns in Ukraine?
26938

The Women’s March on International Women’s Day on March 8 in Kyiv has been going on for several years now, but this year saw a distinct spike in participants.

The organizers of the event hoped to draw attention from the authorities and the public to the necessity of ratifying the Istanbul Convention, which criminalizes violence against women and domestic violence as a whole. All the participants were also demonstrating against sexism and discrimination.

The marchers went from Mykhailivska Square to Poshtova Square, through the Maidan in the center of Kyiv. Eco-activists also joined the marchers.

Local Kyiv police and units from the National Guard provided security for the event.

« We’ve been fighting for the right to control our own bodies for centuries, for the right to decide when to have children and who to marry. We’re women and we’re different, but we’re all equal. And we, for some reason, have to today, in the year 2020, go out into the center of the city with this sort of ‘security’, in order to say that we’re against violence. »

– Elena Shevchenko, an organizer of the Women’s March, head of the ‘Insight’ NGO

« I’ve come out today because the rights of women – is a natural right, and it’s a fully understandable message. It’s a value that’s shared by Ukraine and the E.U, which is why it needs to be upheld. In the E.U., these marches are quite common. However, several countries still do not have gender equality, but the E.U. leadership is now trying to solve this issue. » 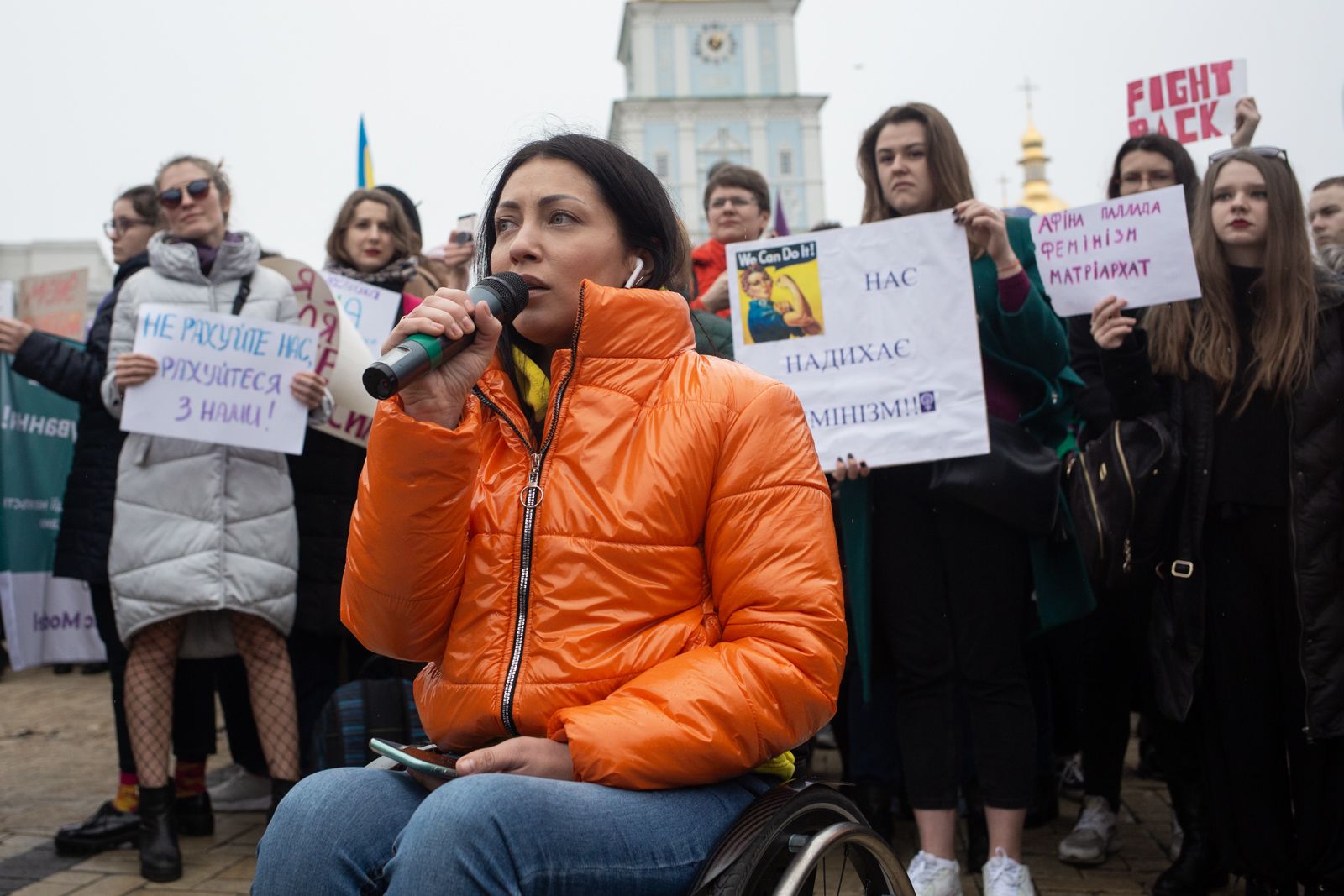 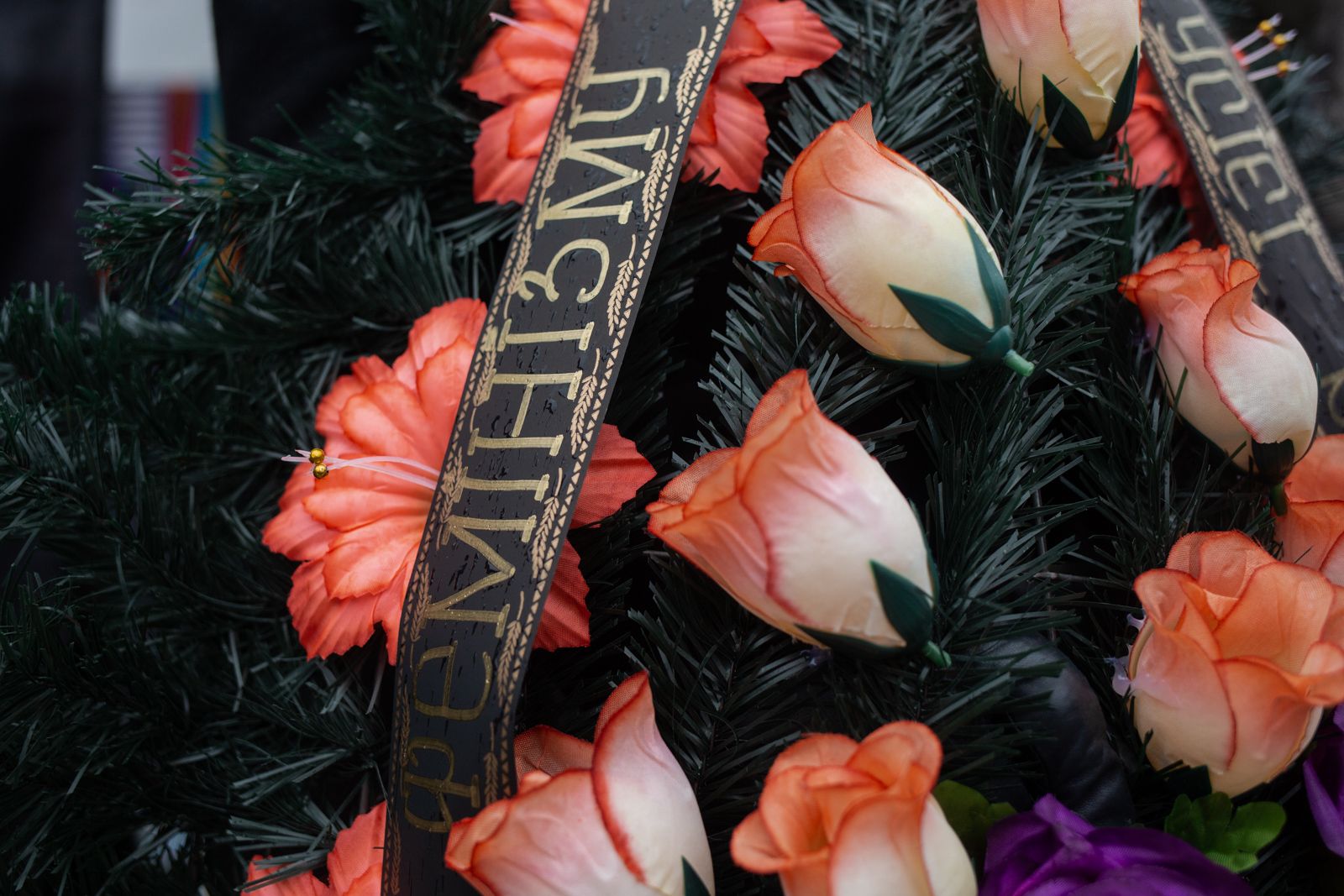 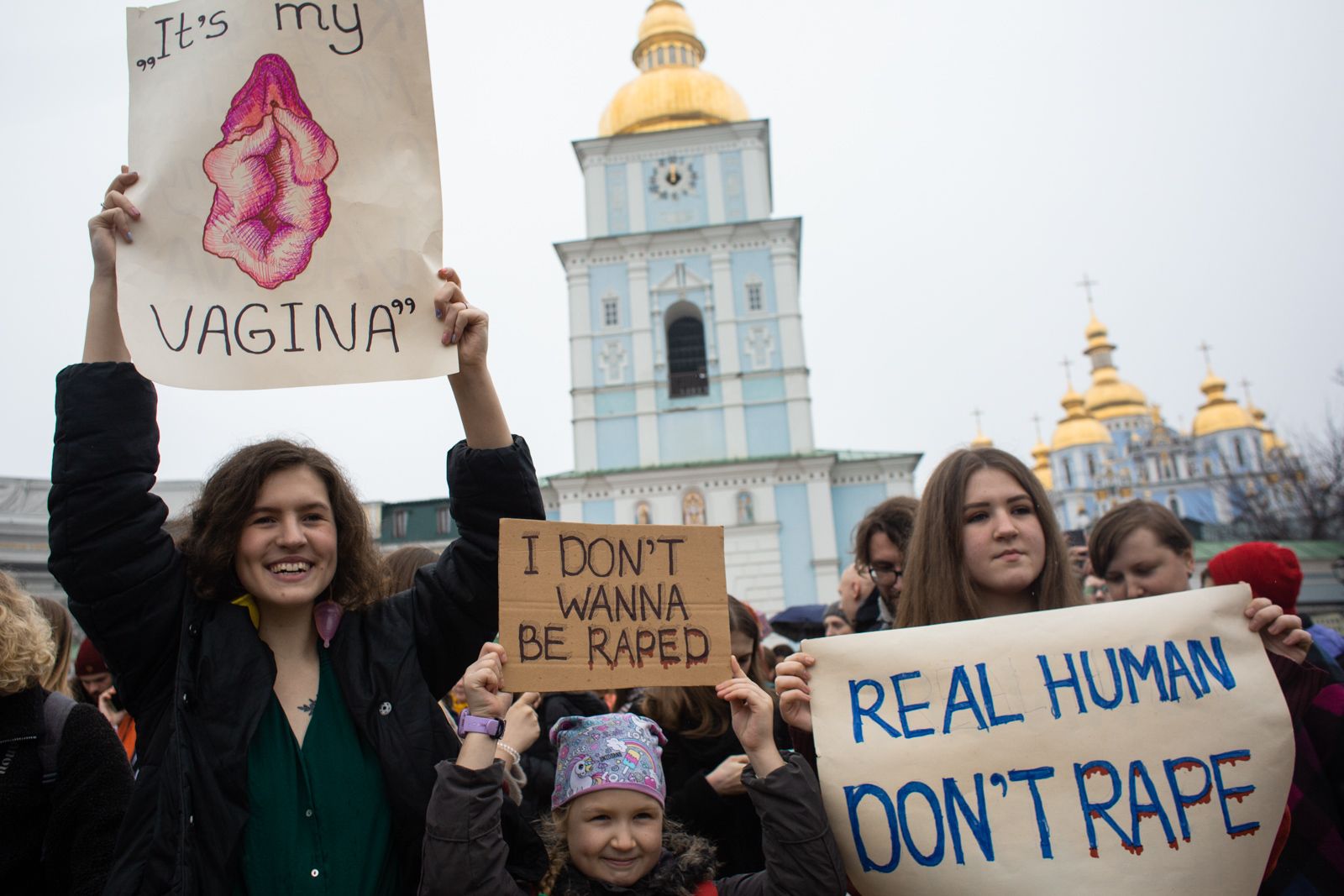 « This demonstration is about the ability to live in a safe world, where everyone has equal rights and opportunities. I think that our country has a lot of unsolved problems, which is why we need to go to these marches. »

– Yuliya, a participant of the Women’s March

« We’re fighting for the rights of Muslim in Ukraine. Our task – to make society understand that Islam also has a concept of feminism, which is aimed at defending the equal rights of Muslim women, on the same level as men in different spheres of life. We’re also announcing that female genital mutilation or suffering in order to preserve a women’s virtue is unacceptable in the modern world. » 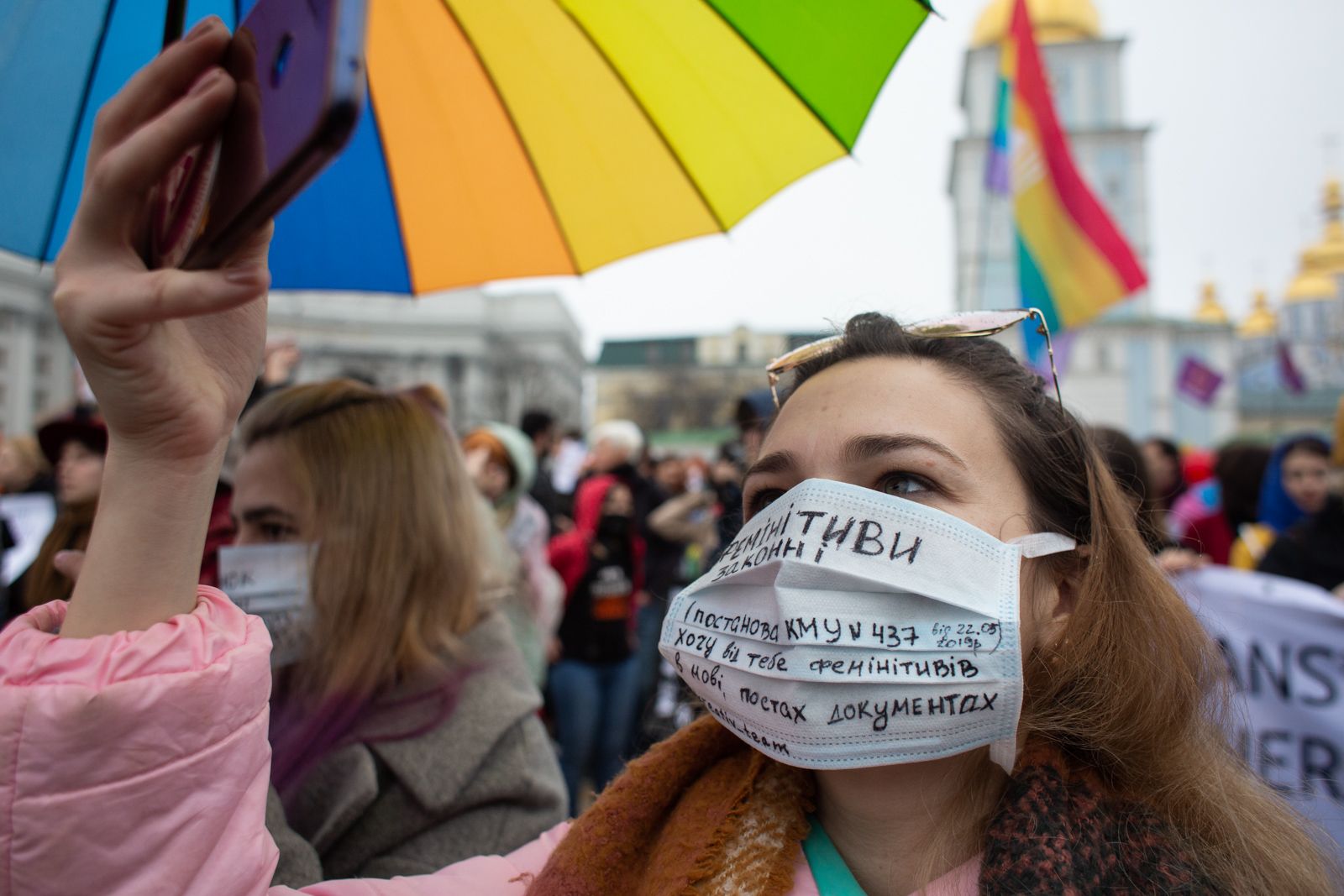 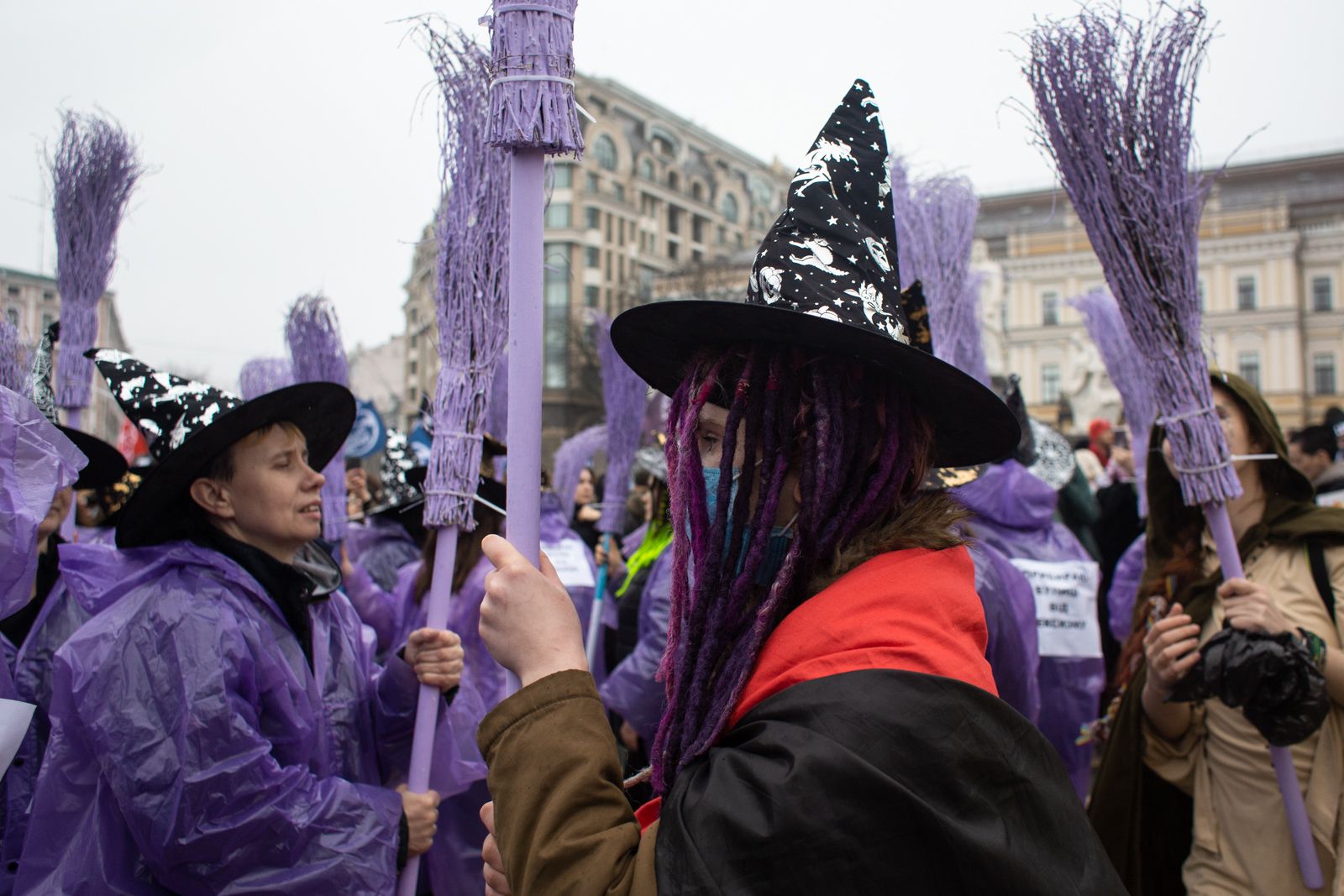 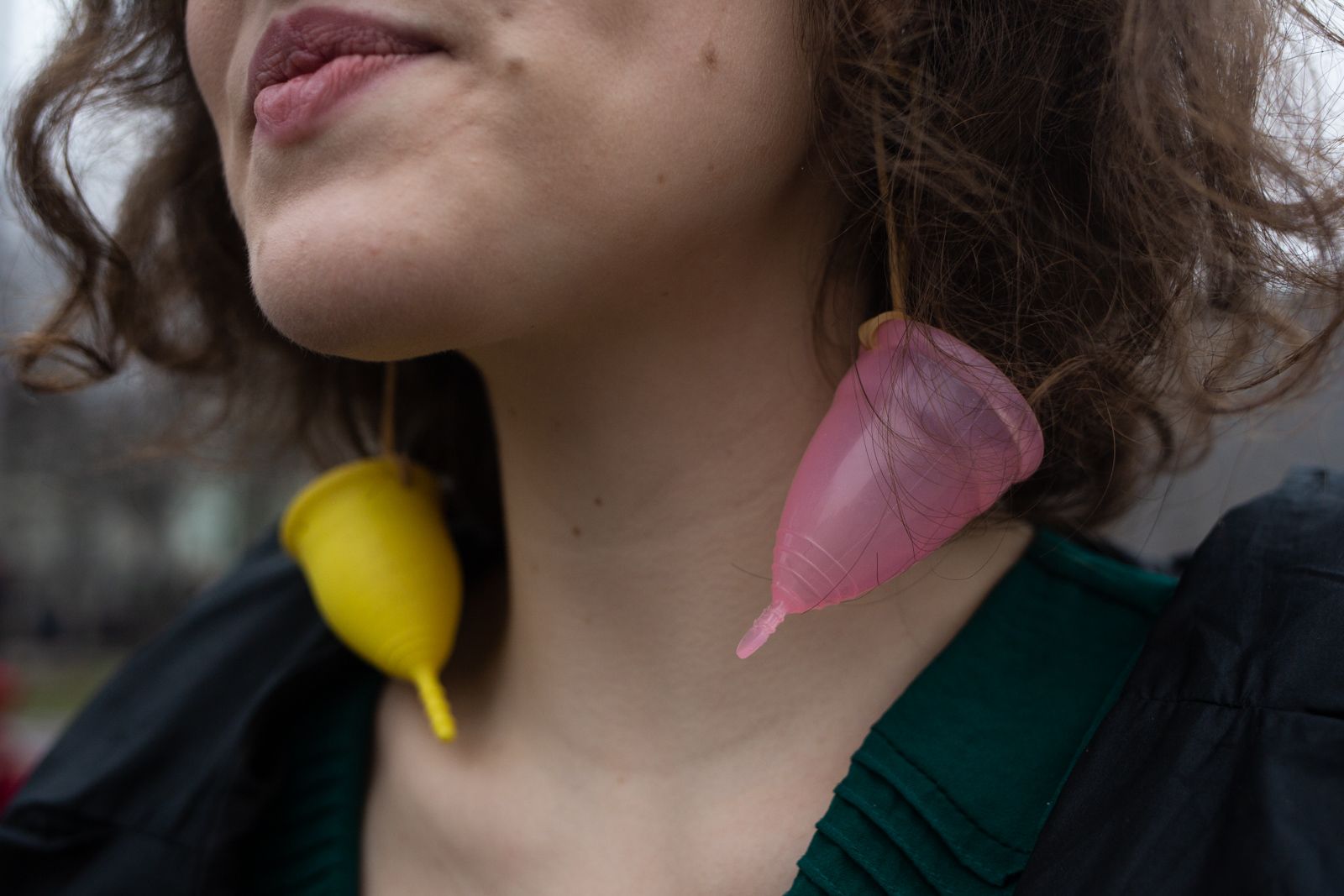 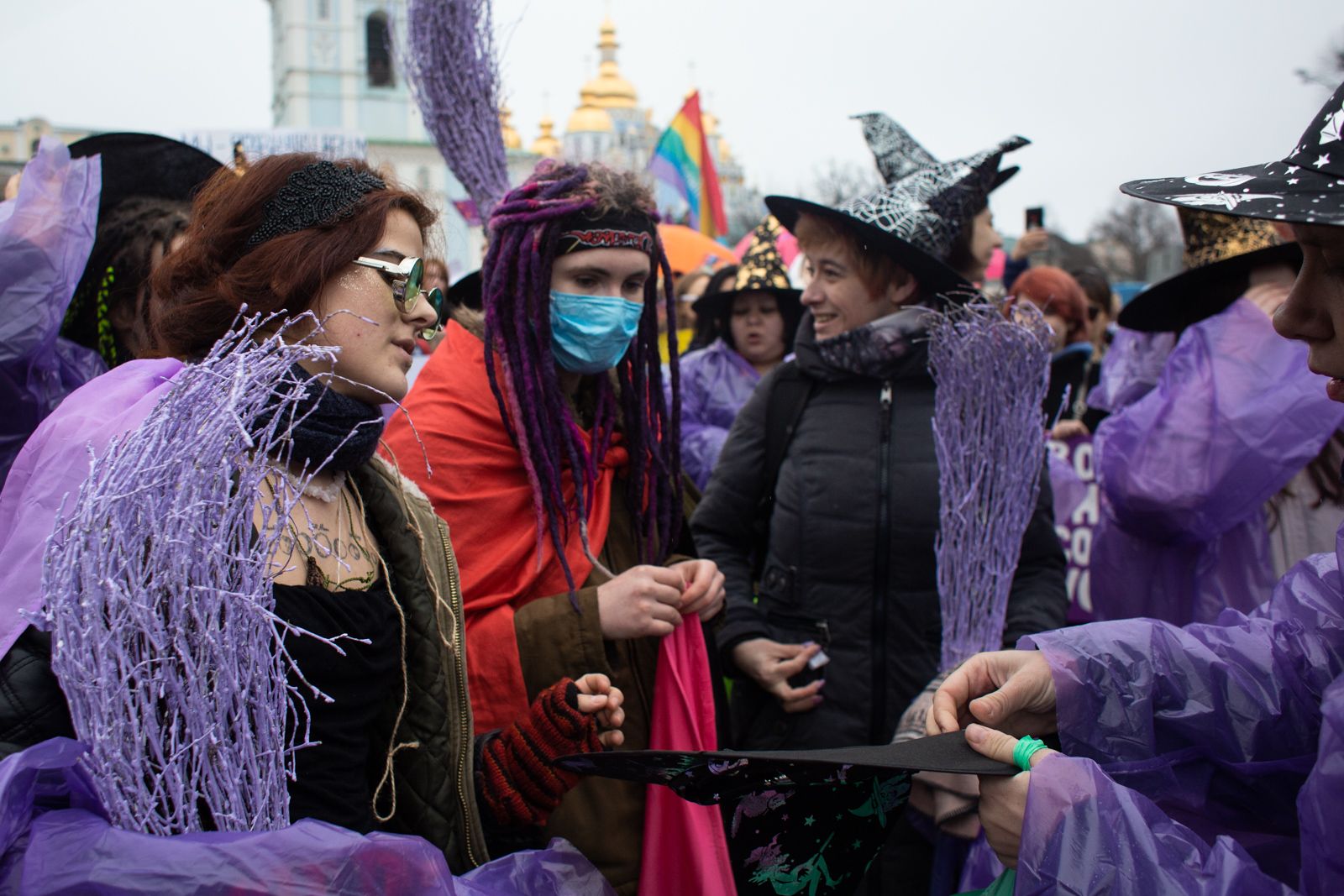 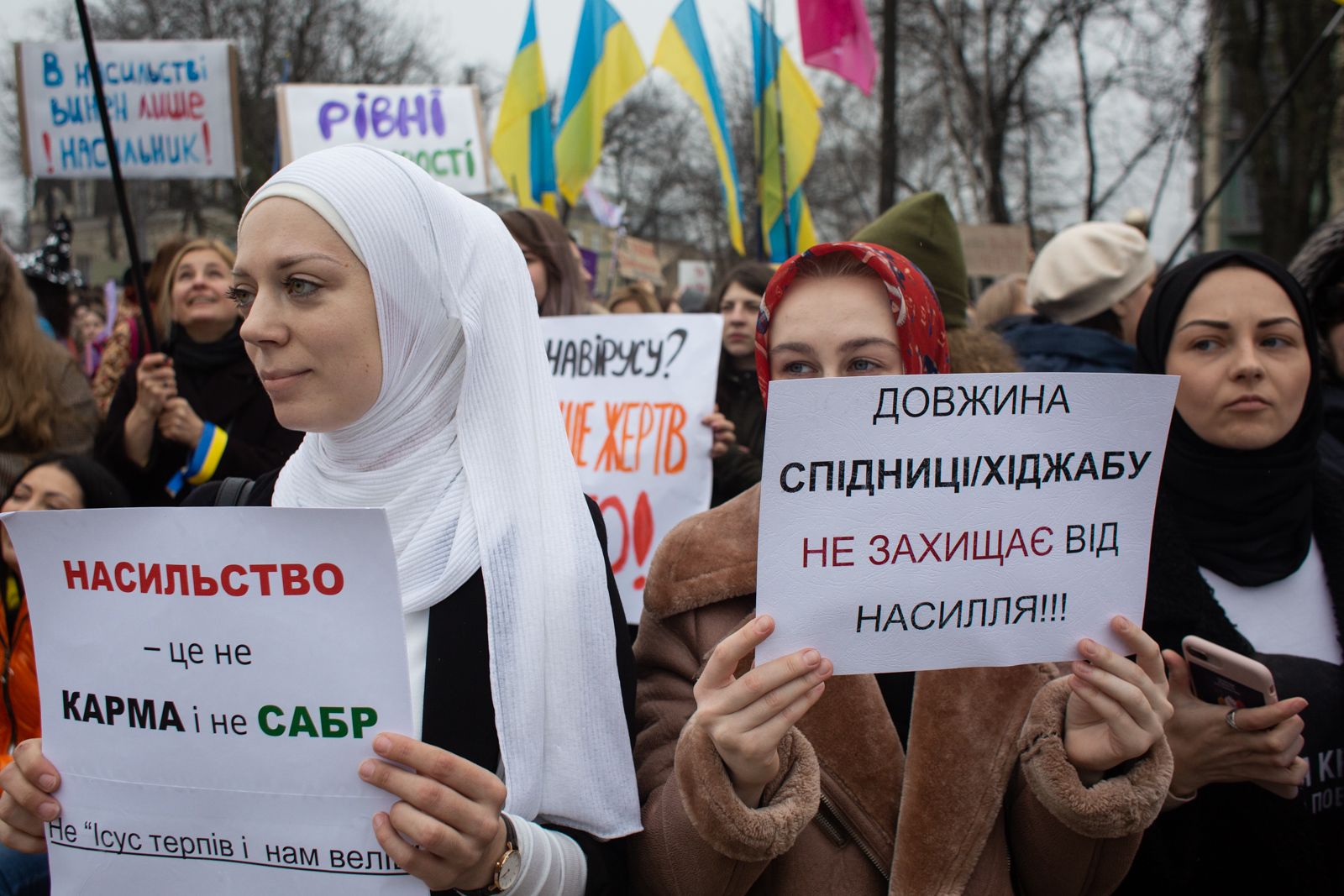 « I came to this demonstration to support women in their fight against stereotypes and fake obstacles in women’s professional development in Ukraine, which keep women from succeeding and from being fully appreciated on a high level in line with their qualifications. Instead of gifting tulips, it’d be better if men joined the demonstration and announced their support. »

– Orest, participant of the Women’s March

« I’m here against reproductive violence. Child-free women, who’ve decided not to have children, are constantly criticized, even criticized for something by women who became mothers. I just want all women to be left alone and to make up their own minds in regards to their life and body. »

– Yuliya, participant of the Women’s March 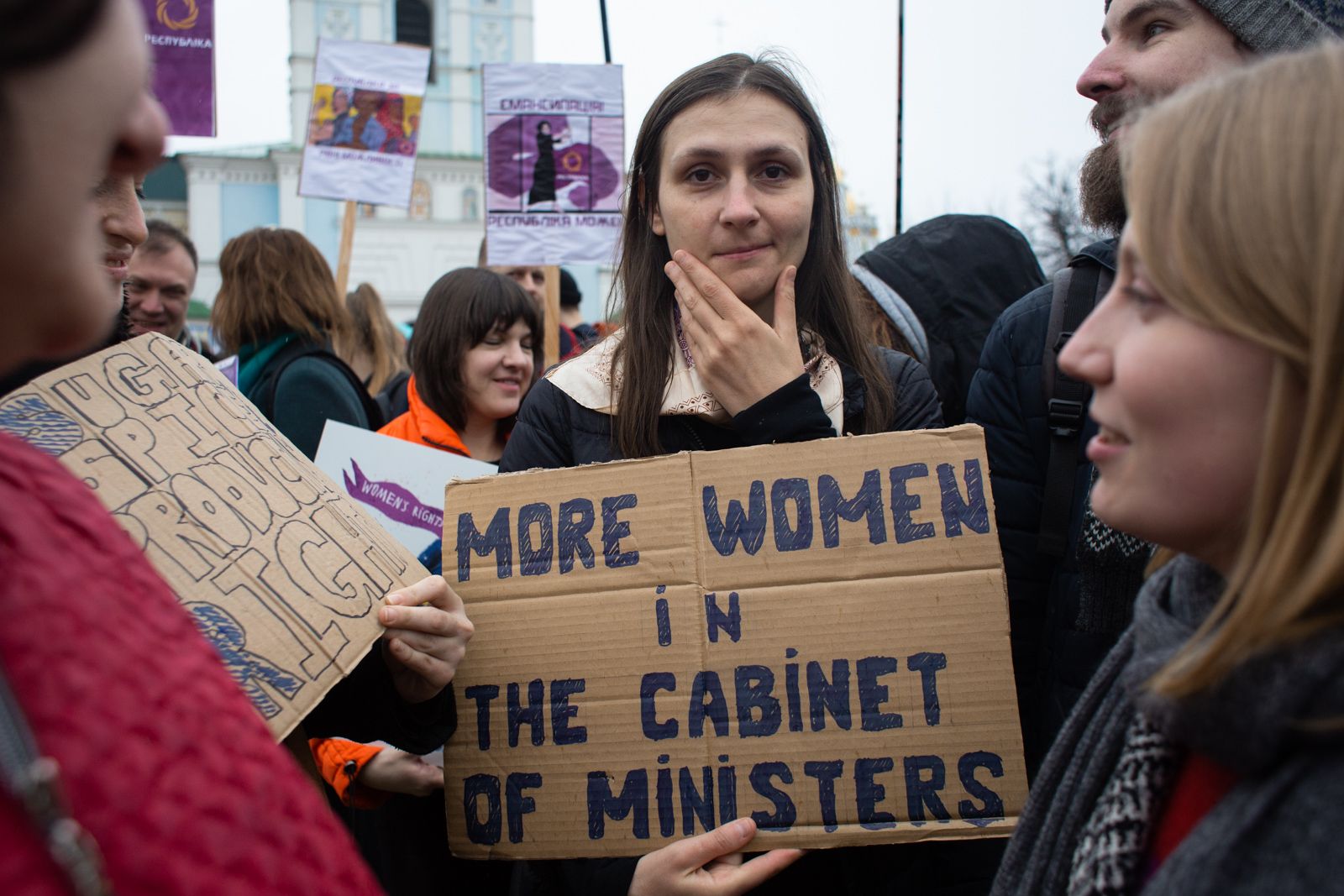 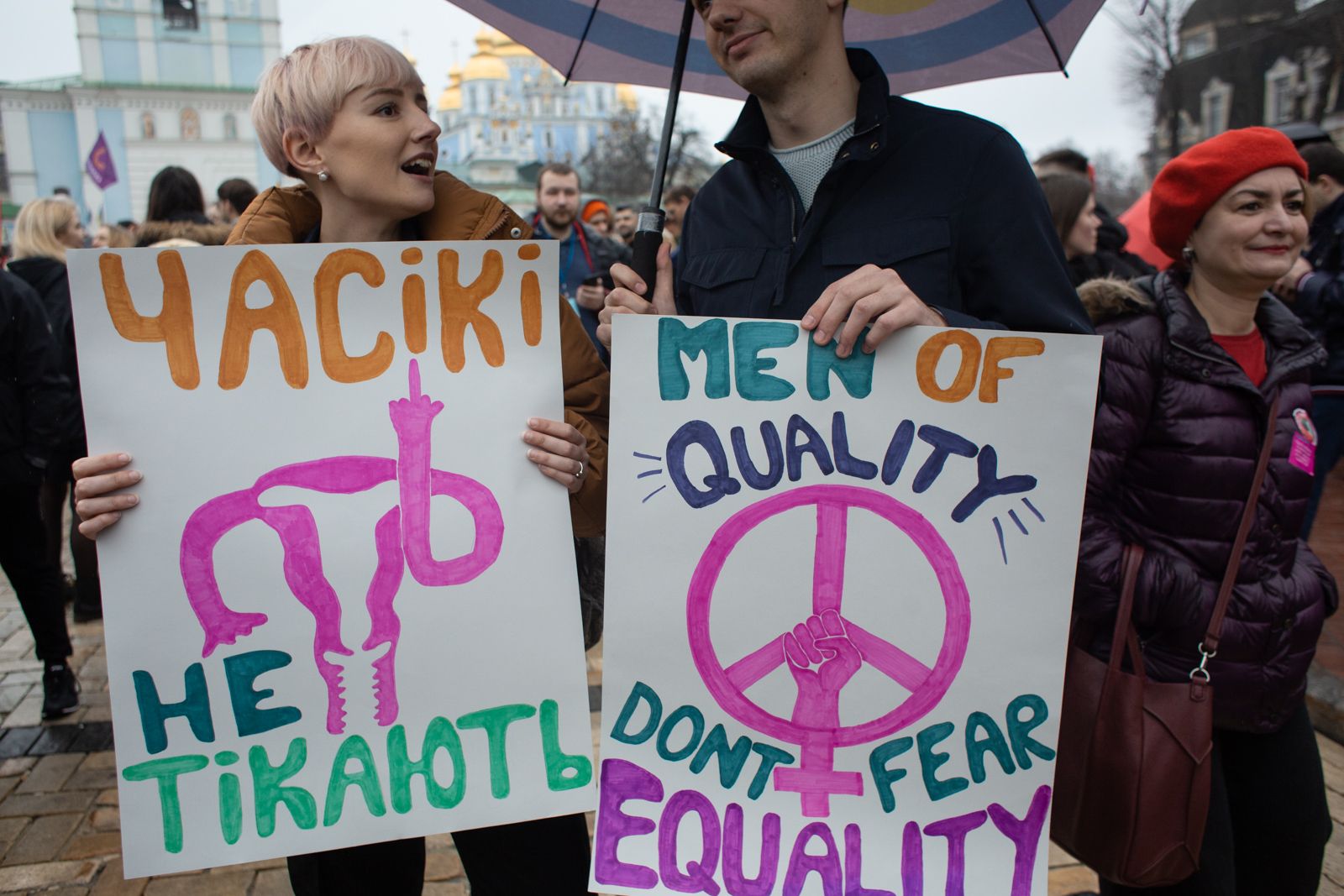 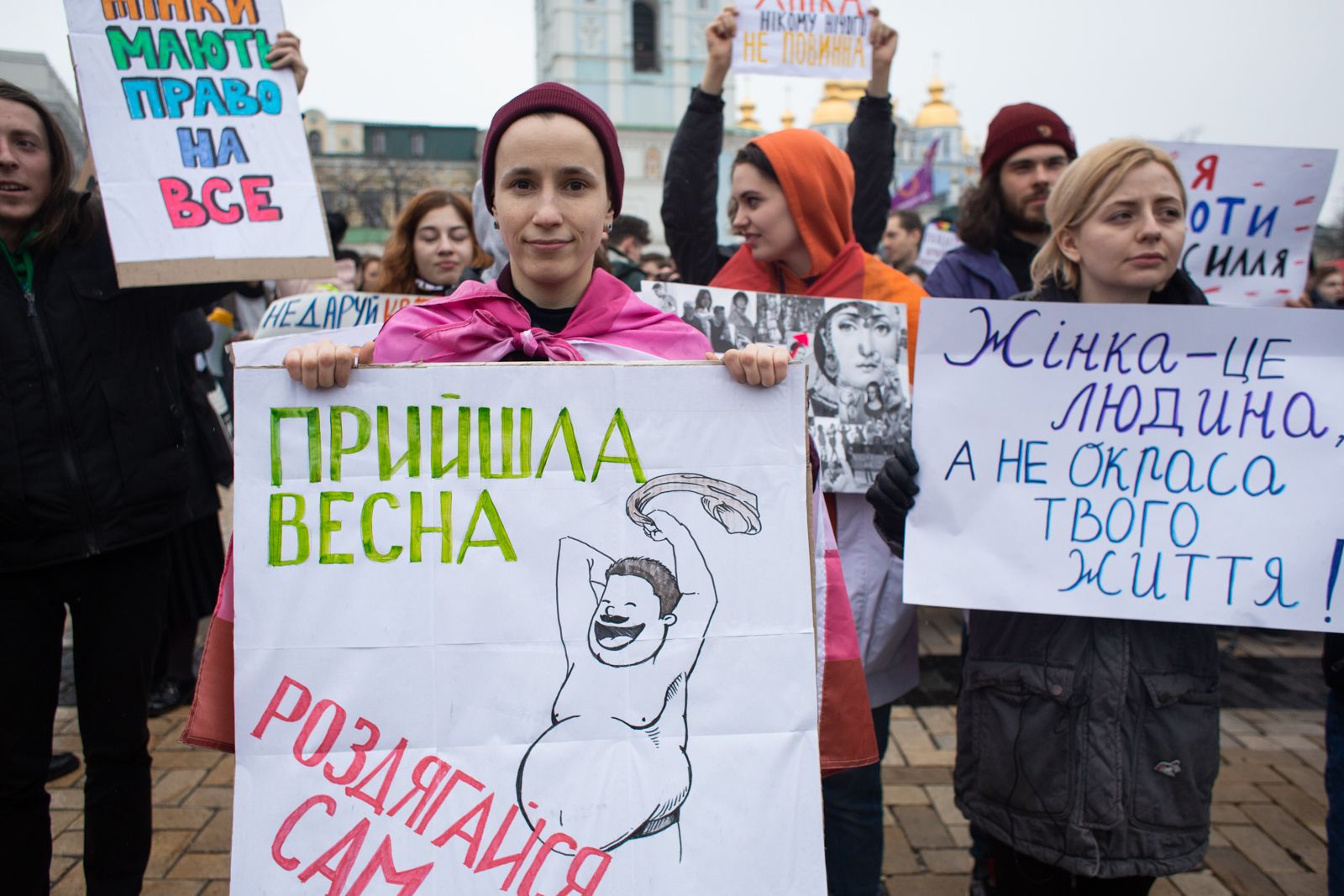 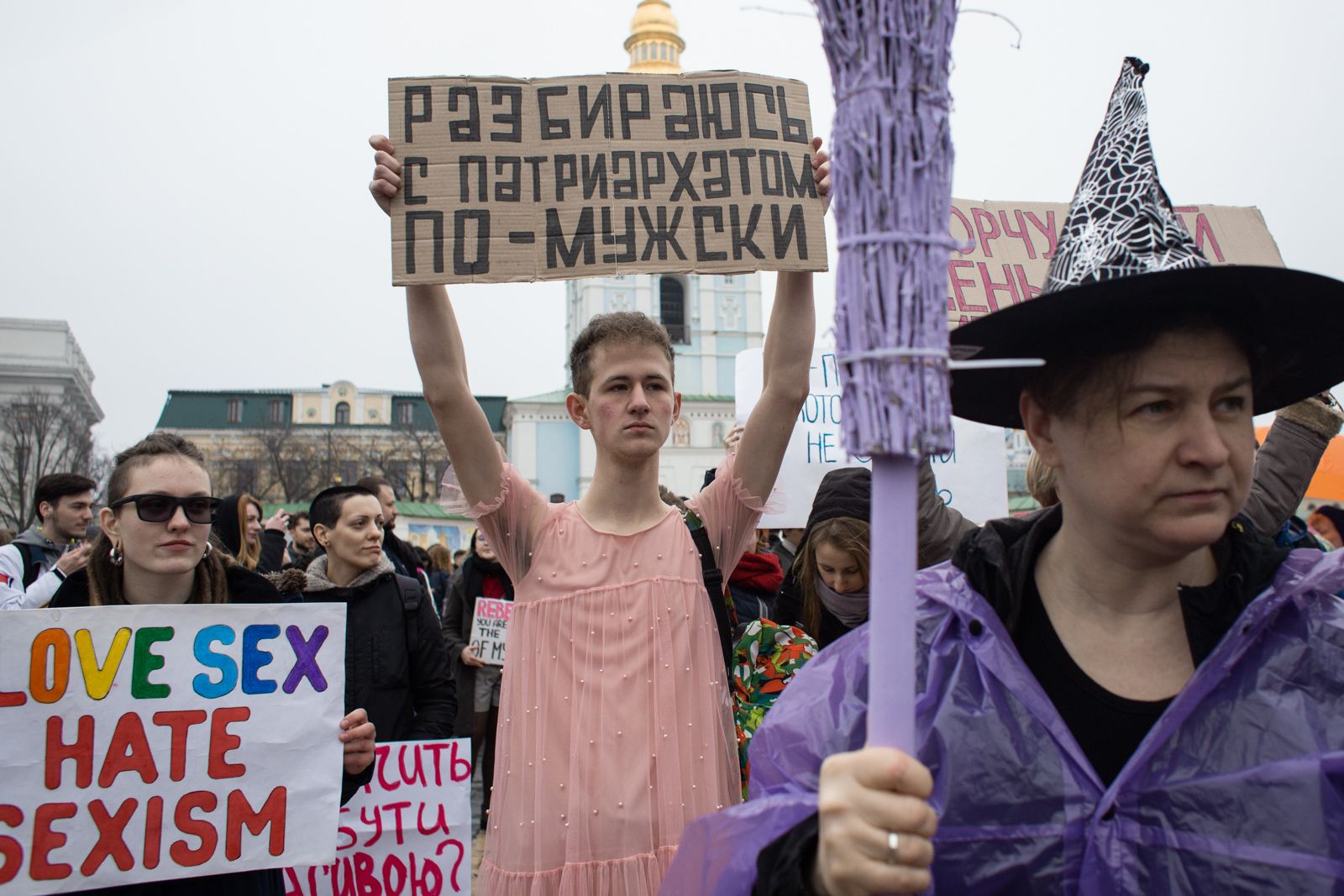 « This isn’t my first year coming to this march, and, in my opinion, the last two years have been really strong marches, not just a few people. It’s become a noteworthy annual public event, which involves all of Ukrainian society. »

« On this march, we require the Ukrainian authorities to ratify the Istanbul Convention, which criminalizes domestic violence and includes the term ‘gender’ into political discussions. »

-Ksenia, participant of the Women’s March 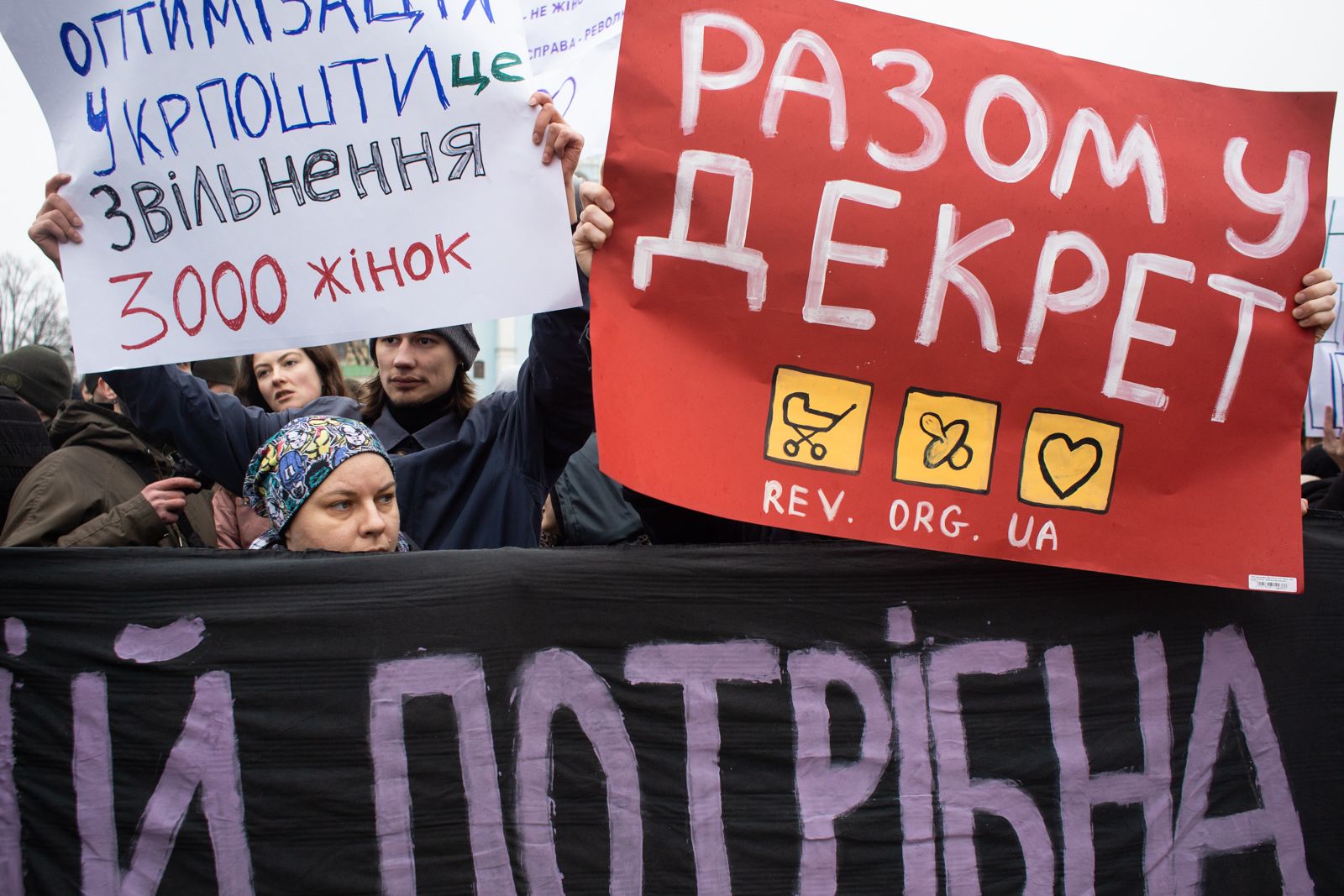 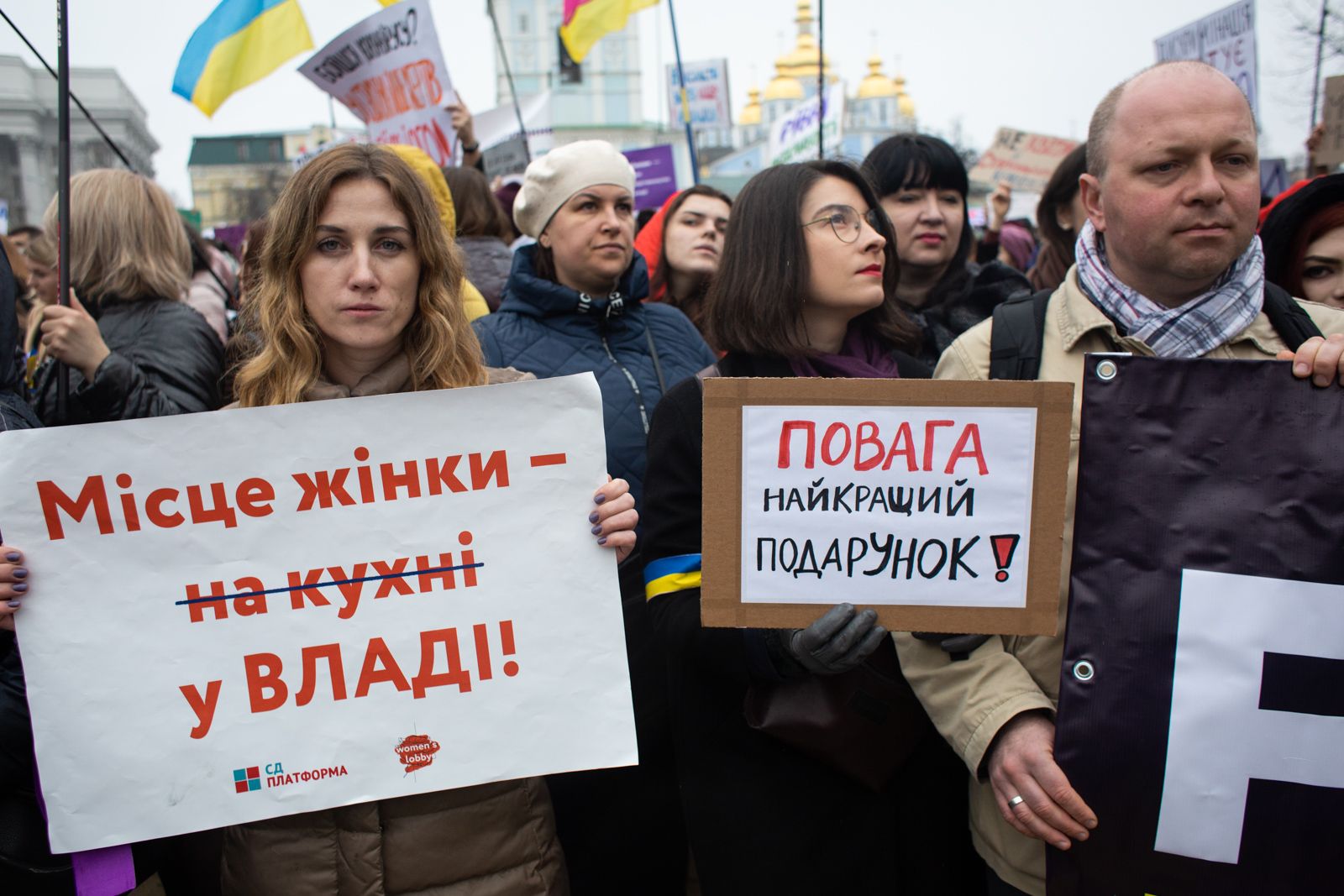 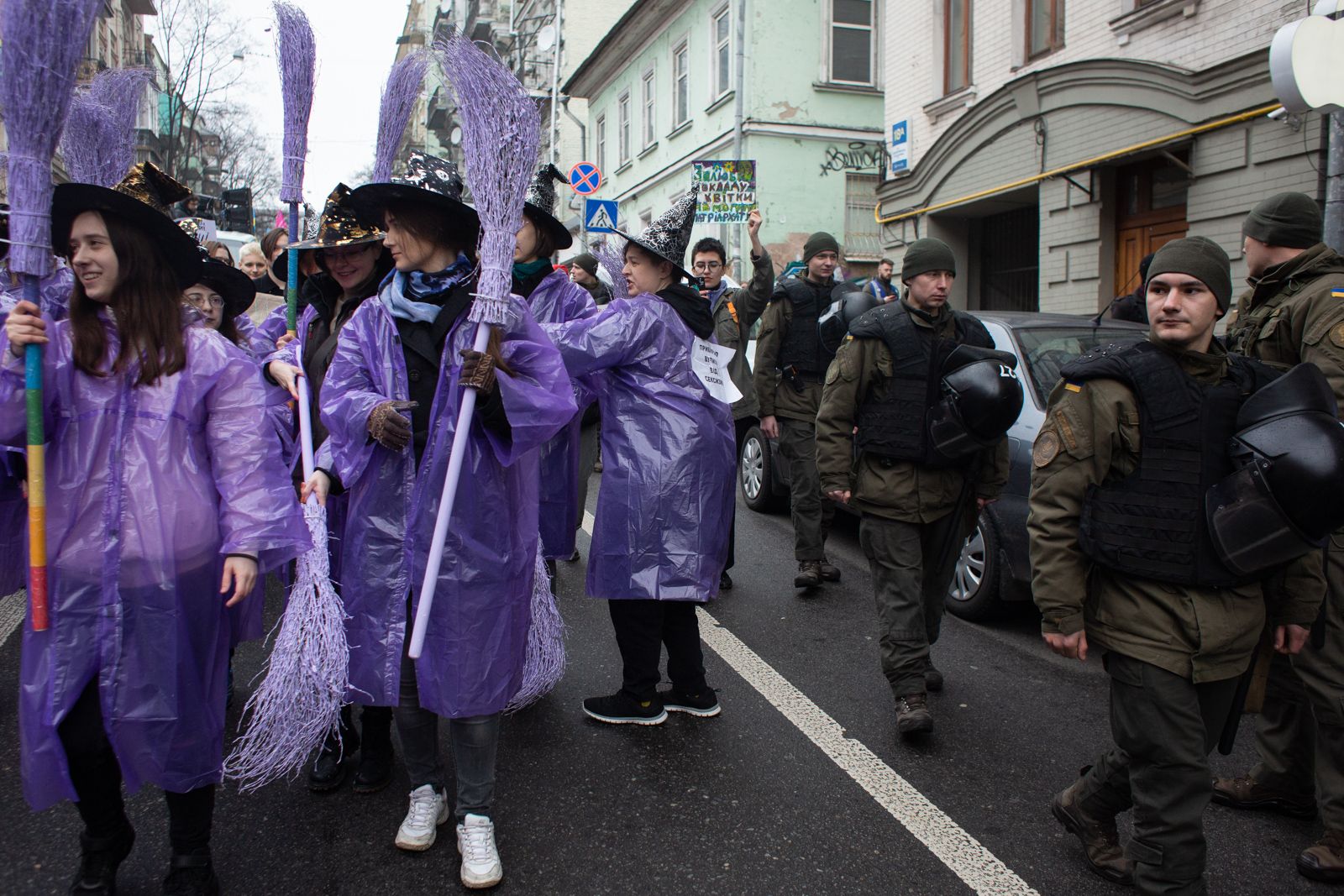 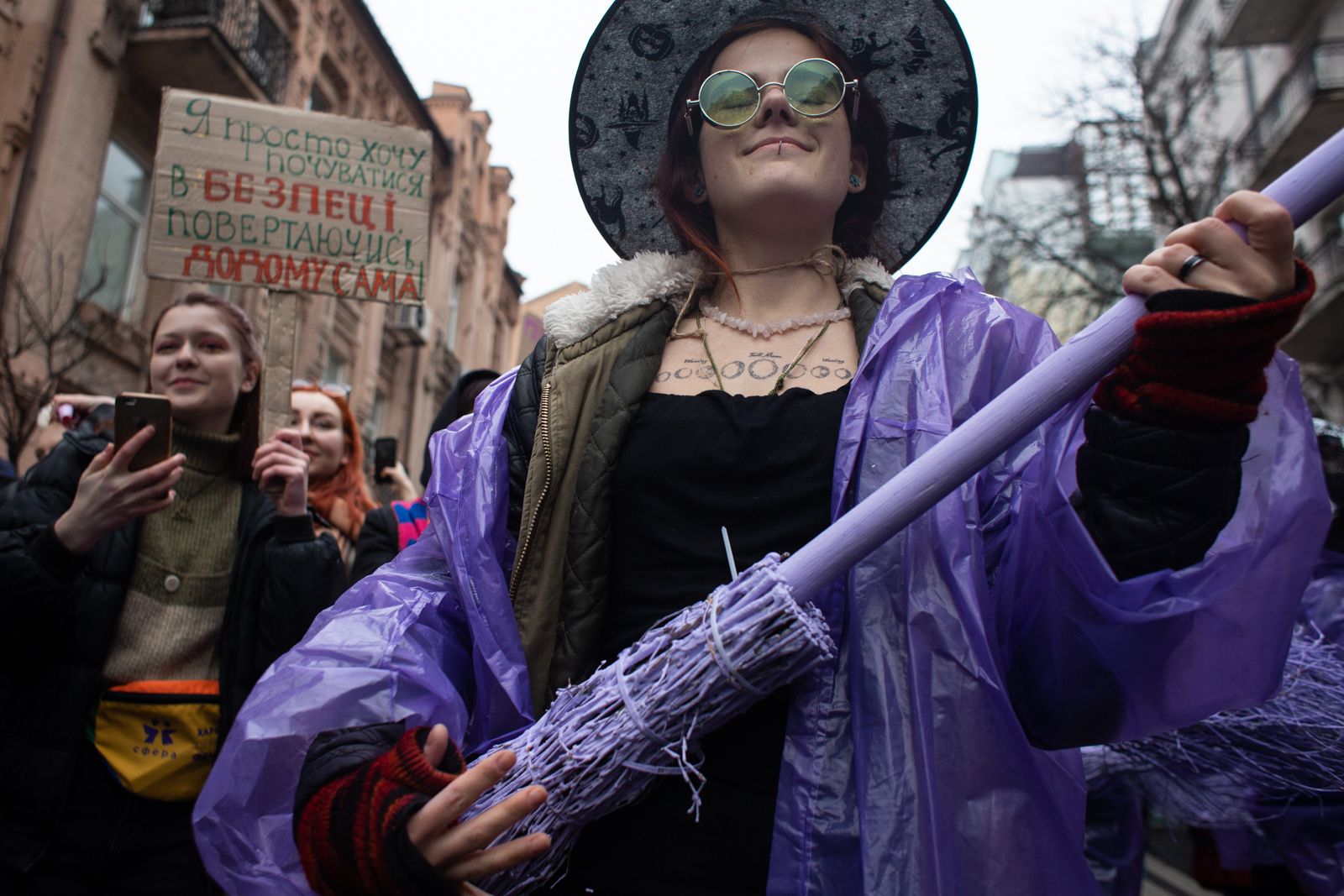 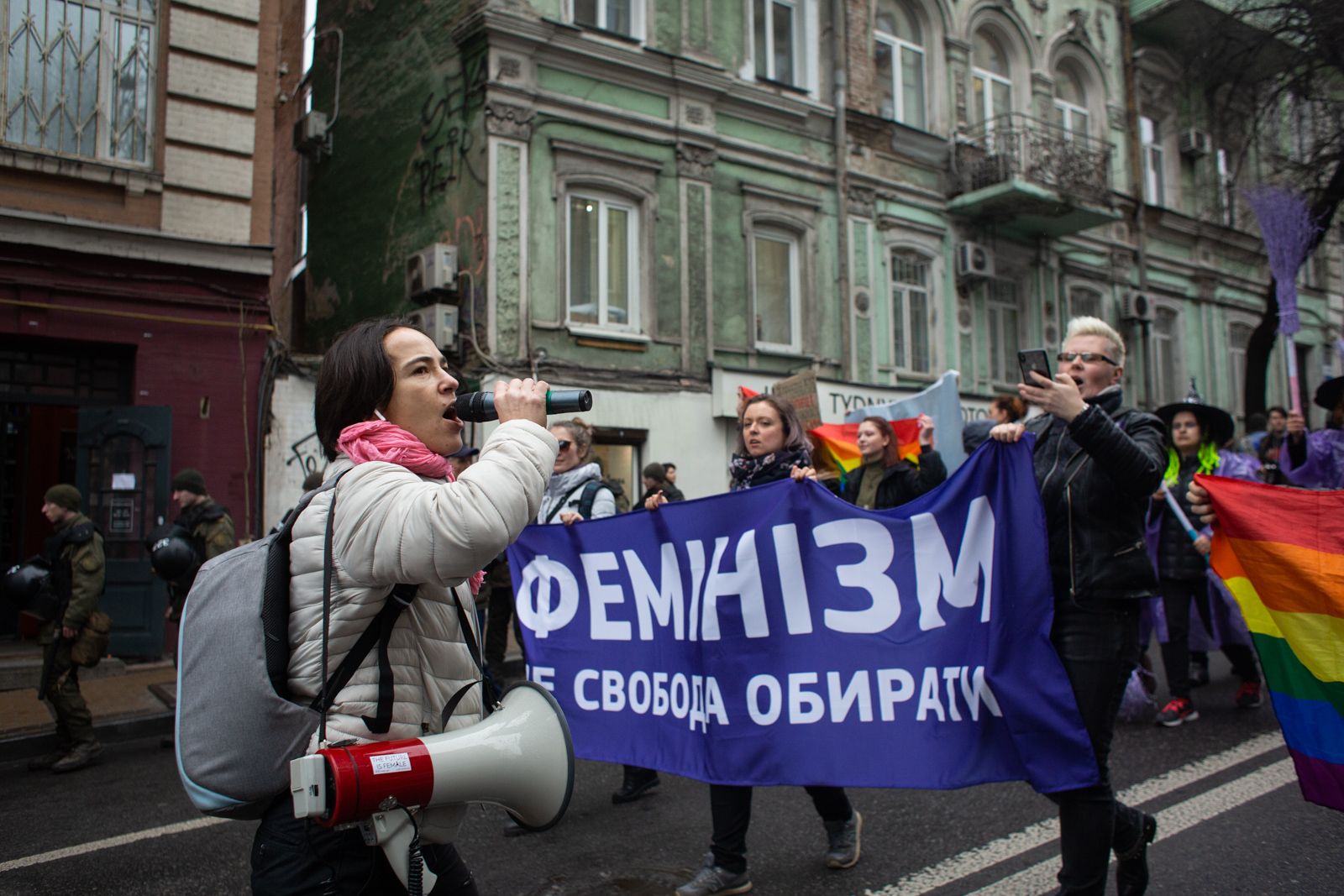 – Grigoriy, participant of the Women’s March

« I’ve been taking part in similar events from the very moment I started activism – almost 10 years. More people join us with every passing year, especially in the regions. The regions are waking up! I hope that March 8 will wake women up in every corner of our country, because we’ve had enough of being patient in the face of domestic violence. It’s very important to not be silent about these things! It’s enough! » 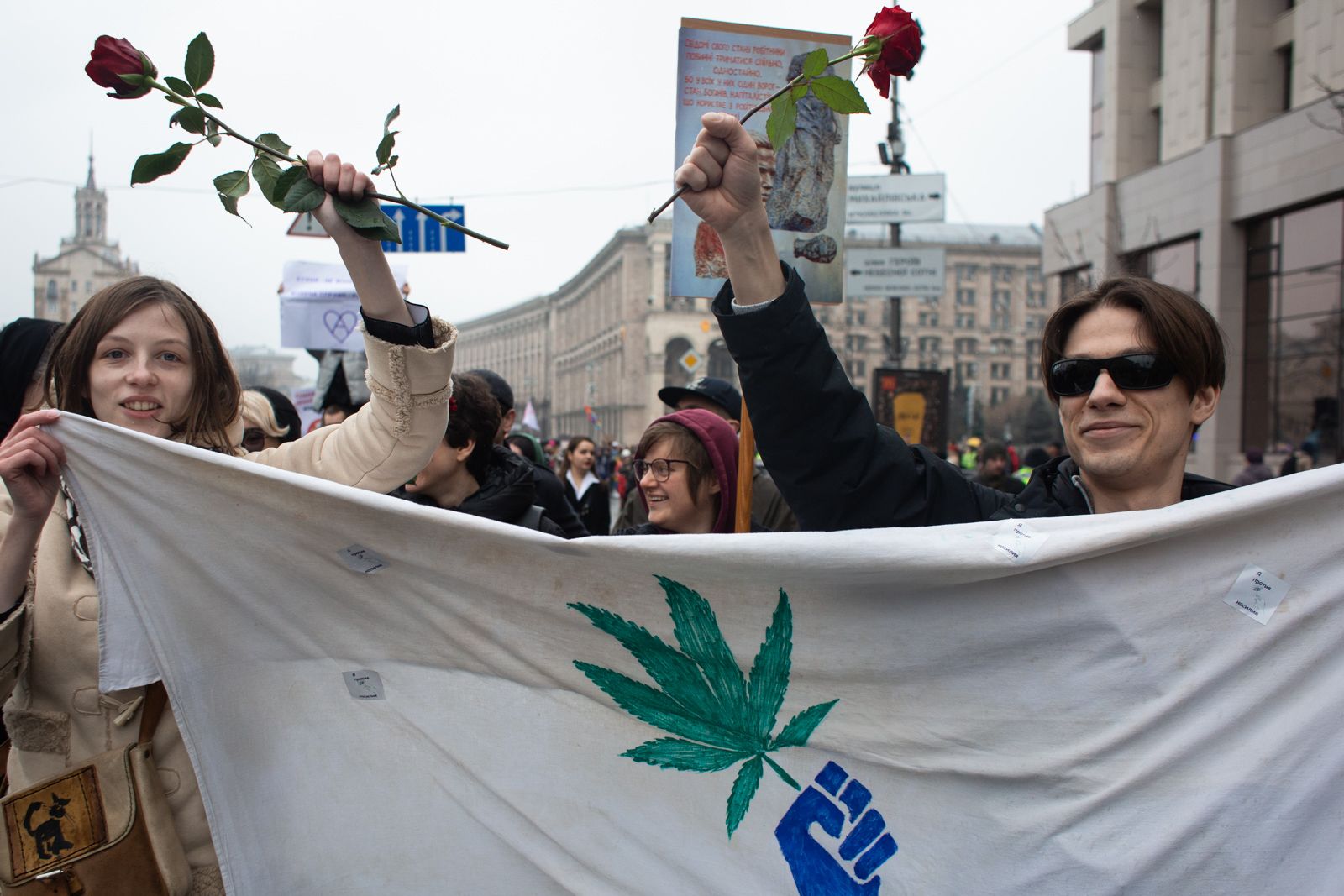 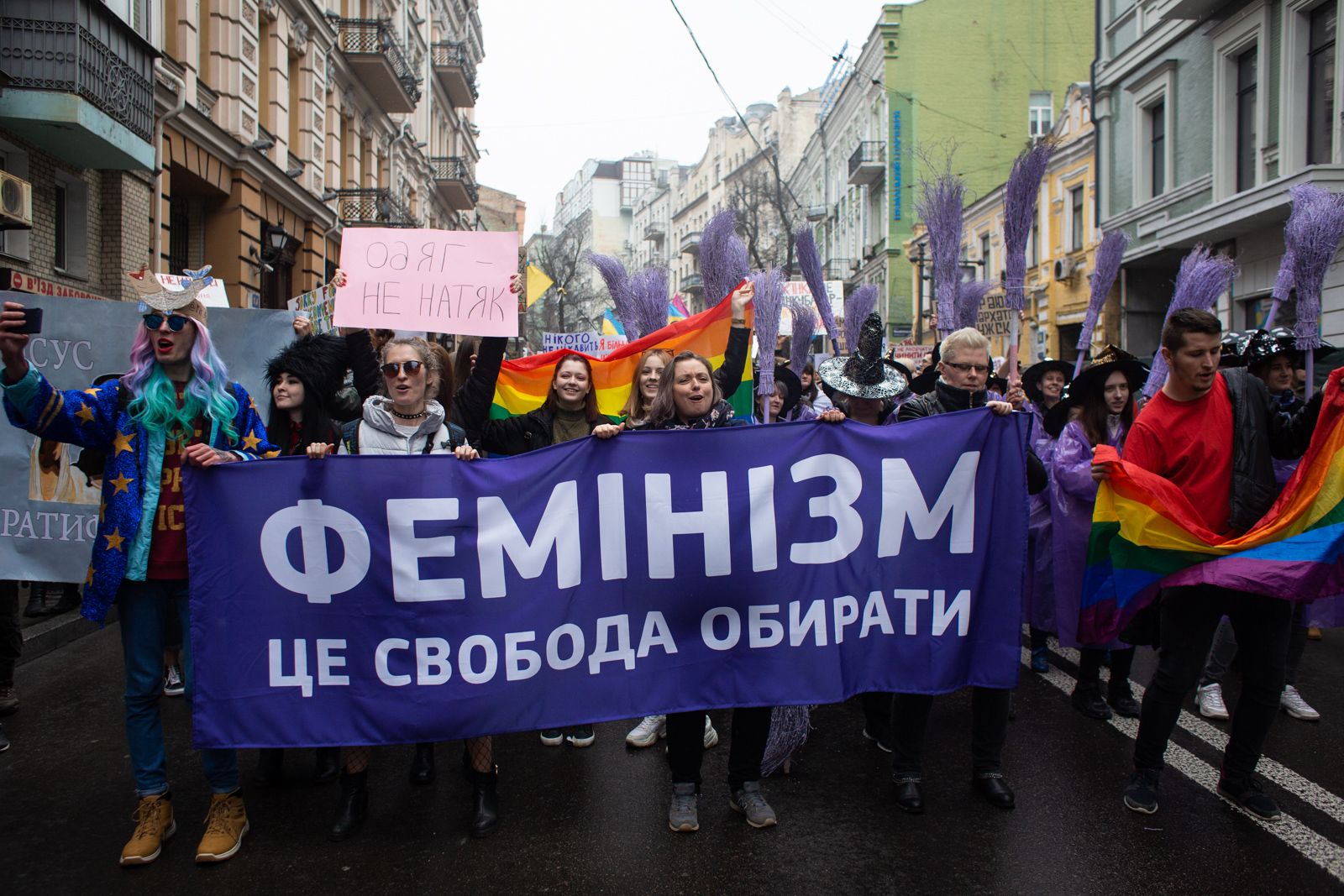 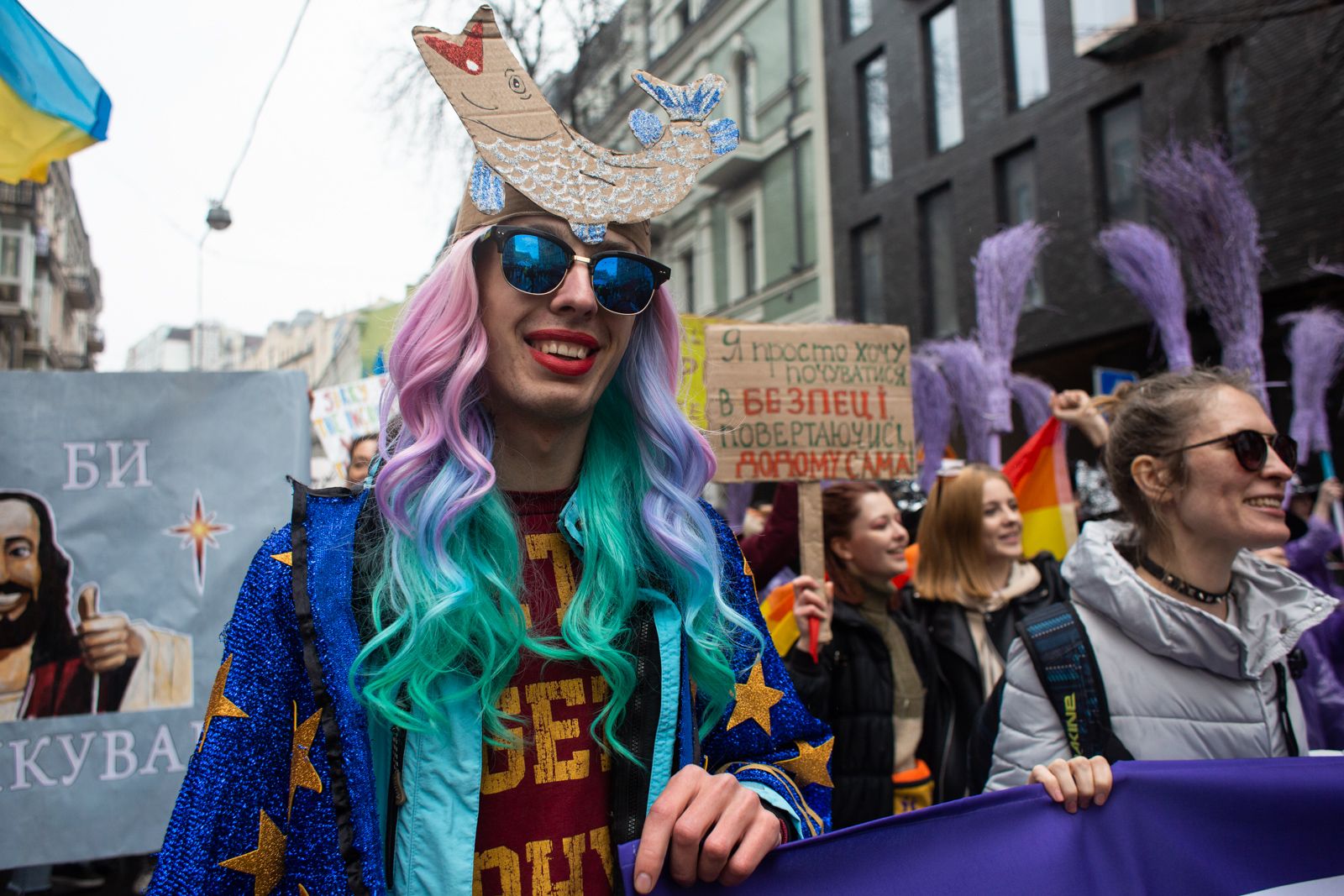 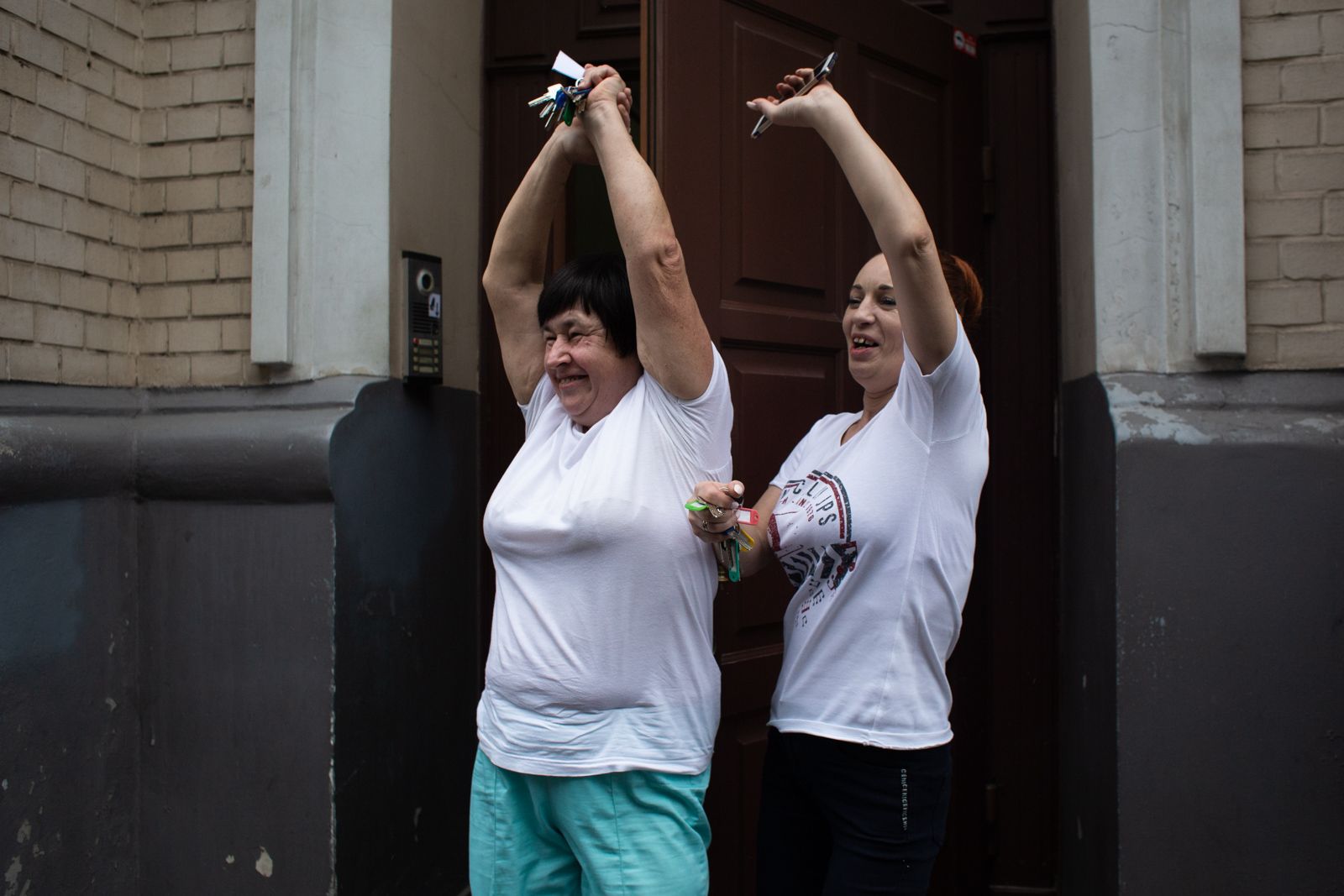 As the marchers were gathering on Mykhailivska Square, a small counter-protest was started by anti-abortion activists.