✅ Thousands of people rallied against a plan by the Law and Justice conservative ruling party to limit journalists' access to Sejm. Only five selected Polish TV stations will be allowed to record or broadcast parliamentary sessions;

✅ "On one side, the media have been excluded from the Parliament in an unprecedented, non-consulted move, and even with what you could argue are good intentions from the ruling party to regulate the Parliament. And it is being done in many other Parliaments around the world. However, it has been done without consultation with the media society;"

✅ The second, more serious problem, according to Przybylski is that the Law and Justice either got scared or simply disregarded the political process and voted for the budget beyond the regulations of the Sejm, which could open the door for other unconstitutional changes in the future;

✅ “So there are roles within the political system of Poland quite evenly distributed, which may serve as the matchmakers for the dialogue and for both sides of the conflict. The main problem actually is one guy. One man who has no official constitutional responsibility. This is the chairman of Law and Justice party, Mr. Kaczynski, who is pushing for a conflict.”

Wojciech, so we’re following closely the protest and the whole political crisis in Poland but what is interesting now, how would you describe the media situation in general? What was very interesting, there was a viral tweet where it was shown that the public broadcasting of Poland, TVP, had the headline: Attempt to Destabilize the Country, while reporting on the protest. So what is the media landscape if we speak about the big media at this stage? What is at stake?

Polish media are quite diverse and they’re strongly anchored in the Polish society. There’s a number of outlets that are left-leaning, liberal-leaning and right wing leaning. And none of them are strictly speaking governmental and all of them joined the protest against the department that wanted to have on the media limiting their access to the Parliament. On the other hand, the TVP is a governmental media, government-controlled and member of the parliament Jacek Kurski is the head of it. Basically, it is a political officer in charge, driving it in a very shameful position, away from a public radio, public TV standard, of non-partisan radio into a sort of pro-governmental propaganda in a bad style. It’s not done in a way to convince more people, it is rather being produced, especially when it comes to the news, to consolidate the support of the existing support of the party.

If I can ask you to follow up on the media situation some more. It seems like the situation in Poland is quite likely comparable to other countries in the region or in the developed world, where the media either pro-government or right or left or any kind of a division play a really important if not decisive role in destroying the middle ground for the dialogue in the country and it seems like the crisis in Poland, the political crisis in Poland, partially because of lack of dialogue between two sides that usually do not even reach out to each other or speak to each other.

The main thing for me to remain a rational a make task for media is to report to provide news. They might be polarized but as you can see on Friday, the media, which are otherwise competing or even maybe hostile to each other or not really hostile, I don’t mean sarcastic, they attack each other’s position, are part of the normal democratic process where there are different sides of the same coin. Now they all joined showing there is a common ground for media and common ground for society when it comes to access to information. And the fact that they battled hard and that news of being reported on both sides in a quite competitive way and they find only who is the first and they try to outmaneuver the competitors. It doesn’t mean that it’s a bad situation for democracy. It could have been better but the main damage right now is being done by the governmental TV and the news reporting from that side because it distorts the reality and the level and quality of news. Distortion is unprecedented in Polish public but also private. But at the same time, it’s not as bad as you might have an impression about it. 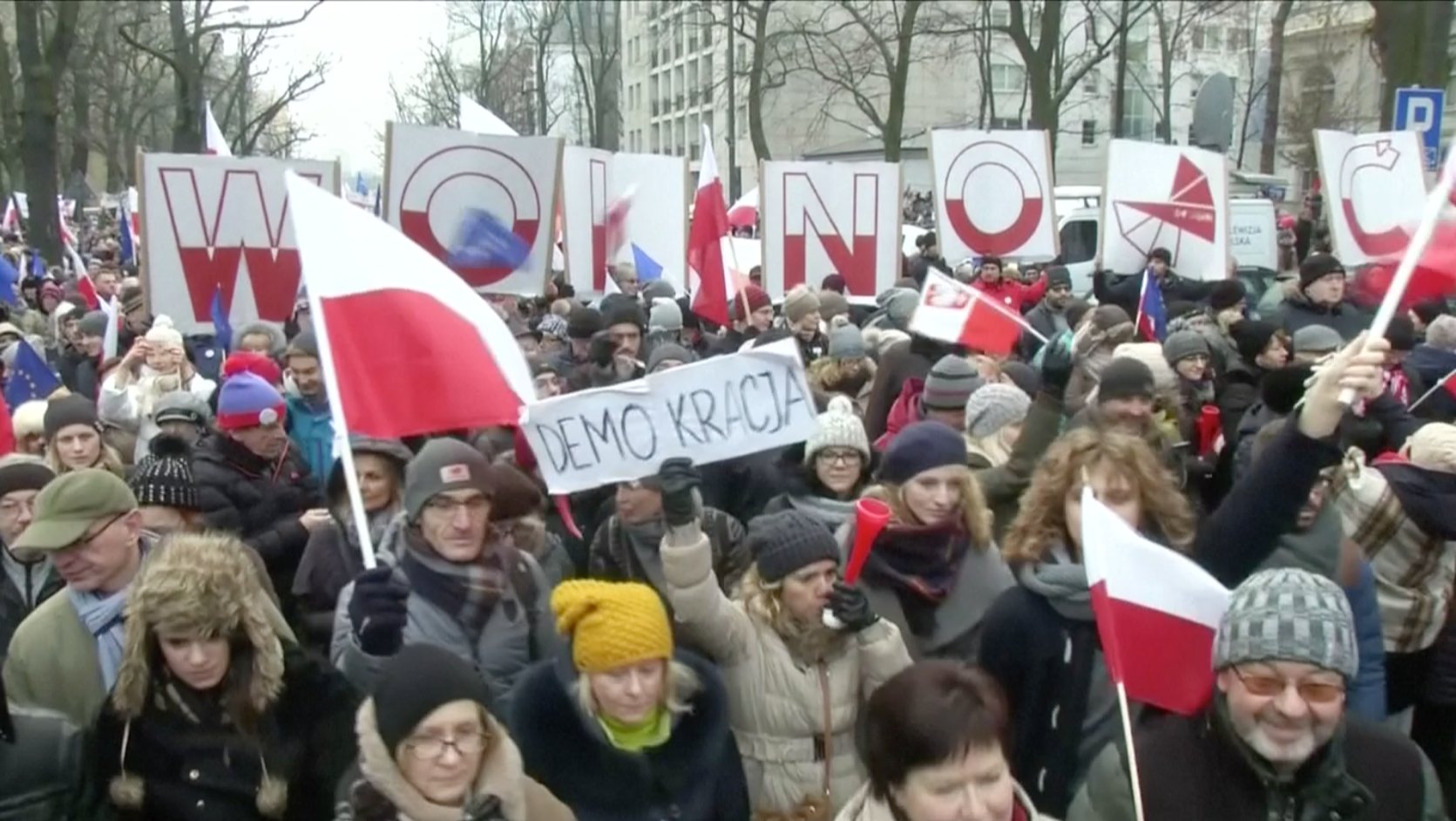 Where and how we can build this dialogue in Poland? If you look from the outside you think it’s so partisan that there is no way. Do you think there is a possibility of the EU interference in anyways or some other partners to kind of try to have these talks between the sides or is it just a Polish issue? And what would be the role of the EU, how do you see it?

The main role is for the Polish actors including the president. The president has a window of opportunity. I’m skeptical about whether he can manage that. But there is a window of opportunity right now to level up in his political position and political power over the Parliament and to distance himself from Kaczynski, and that in a way he tries to manifest. He’s still with the governing party, he’s still coming from the constituency of the right-wing voters but he reached out to the opposition and he called for moderation in the current conflict.

So there are roles within the political system of Poland quite evenly distributed, which may serve as the matchmakers for the dialogue and for both sides of the conflict. The main problem actually is one guy. One man who has no official constitutional responsibility. This is the chairman of Law and Justice party, Mr. Kaczynski, who is pushing for a conflict. We have seen the speaker of the Parliament at the very beginning on Friday when he was excluding one of the opposition MPs by mistake because he overheard or overreacted in a quite intense situation. His readiness has been manifested and then reported by other members of the Parliament. He wanted a compromise but then he met with Kaczynski and Kaczynski ordered Kuchcinski apparently that the speaker of the parliament cannot reinstate the excluded MP. And he proceeded even further, most likely again following non-regulated advice or even orders from the chairman of the peace party. And the main problem is really this man. 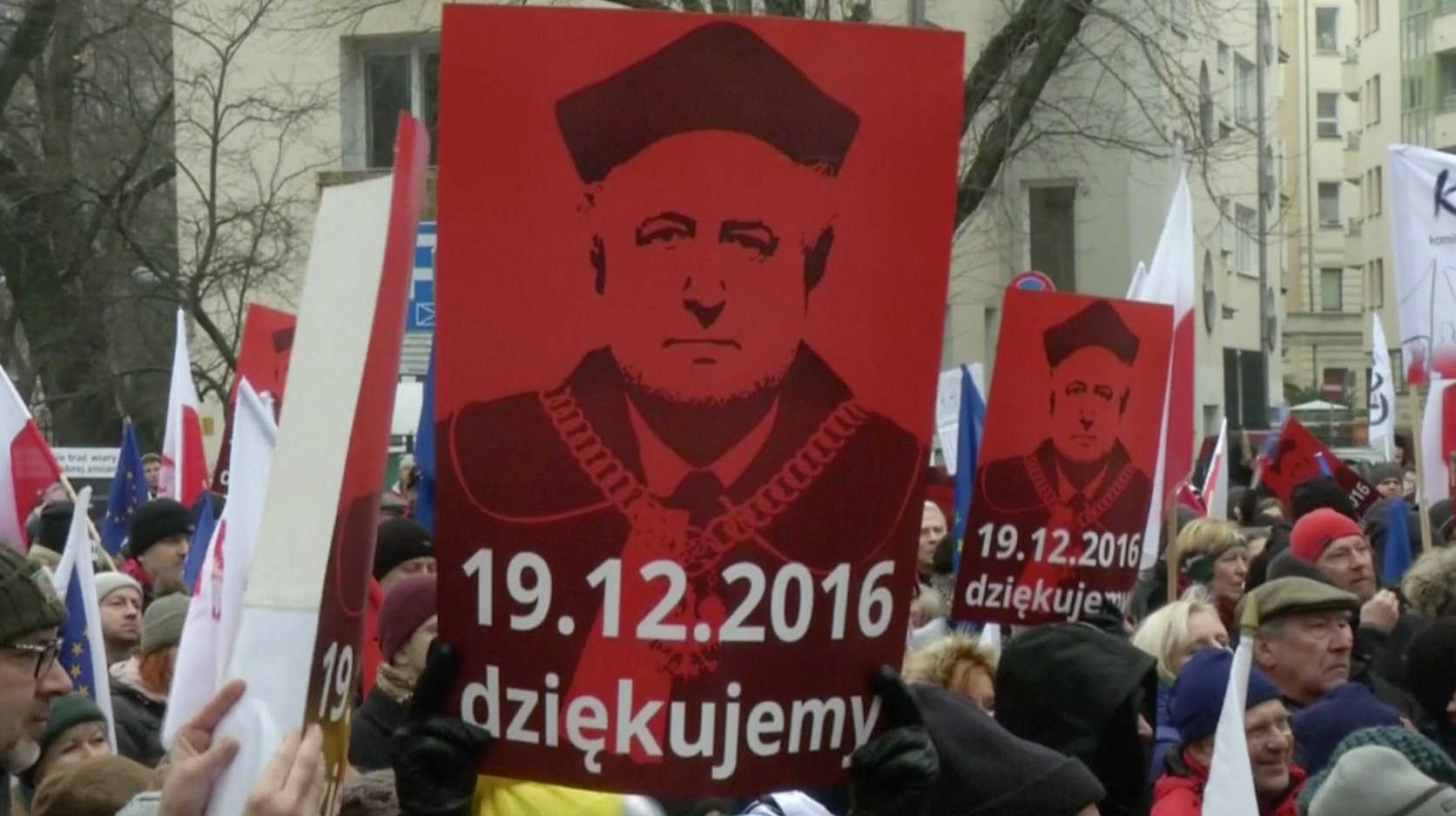 We are following the turbulence in the Polish political life for the last year. But how can you put this particular protest into context? How serious are they, because there were a lot of different kinds… How can you explain it for the audience outside?

Two things happened in parallel. On one side, the media have been excluded from the Parliament in an unprecedented, non-consulted move, and even with what you could argue are good intentions from the ruling party to regulate the Parliament. And it is being done in many other Parliaments around the world. However, it has been done without consultation with the media society. So this is one source that triggered the problem that started on Friday afternoon.

The other one is at the same time, because of the intense situation because of several developments in the country, in the government policy, power execution in the last week, there might be a mistake and an effort to enforce the political will of the party. The party is a majority and it could have voted easily for the budget. But they either got scared or simply disregarded the political process and voted the budget beyond the regulations of the Sejm, of the Parliament, and this is the second and more serious root of the problem. Because if the ruling party continues to claim that the unlawful voting over the budget has been in fact legal and if the President would accept that, then the ruling party—the Kaczynski party—can vote anything and can exclude whatever number of MPs of the opposition, without adhering to the regulations of the Sejm and that opens the door for any change that they were not elected for including the changes in the Constitution and introducing laws that otherwise would not be possible.

Media Monitor: G20, Kissinger on Ukraine and the Infowar
1668