Ex-MP turned collaborator found to store over 6,000 unique artifacts from Crimea worth millions of dollars
3736

EXCLUSIVE: The True Cost Of Remaining Ukrainian in Crimea
22713

Hromadske's investigative unit Slidstvo.Info publishes a groundbreaking story revealing the truth behind business empire of the Ukrainian president. The report is part of the OCCRP-led international effort of exposing corruption that has ties to twelve current and former head of states.

The story begins in August 2014, in Nicosia, the capital of Cyprus. On Monday, August 4th, George Ioannou, an employee of the Cyprus Company, Dr. K. Chrysostomides & Co, started his day with a letter to Tortola in the British Virgin Islands. 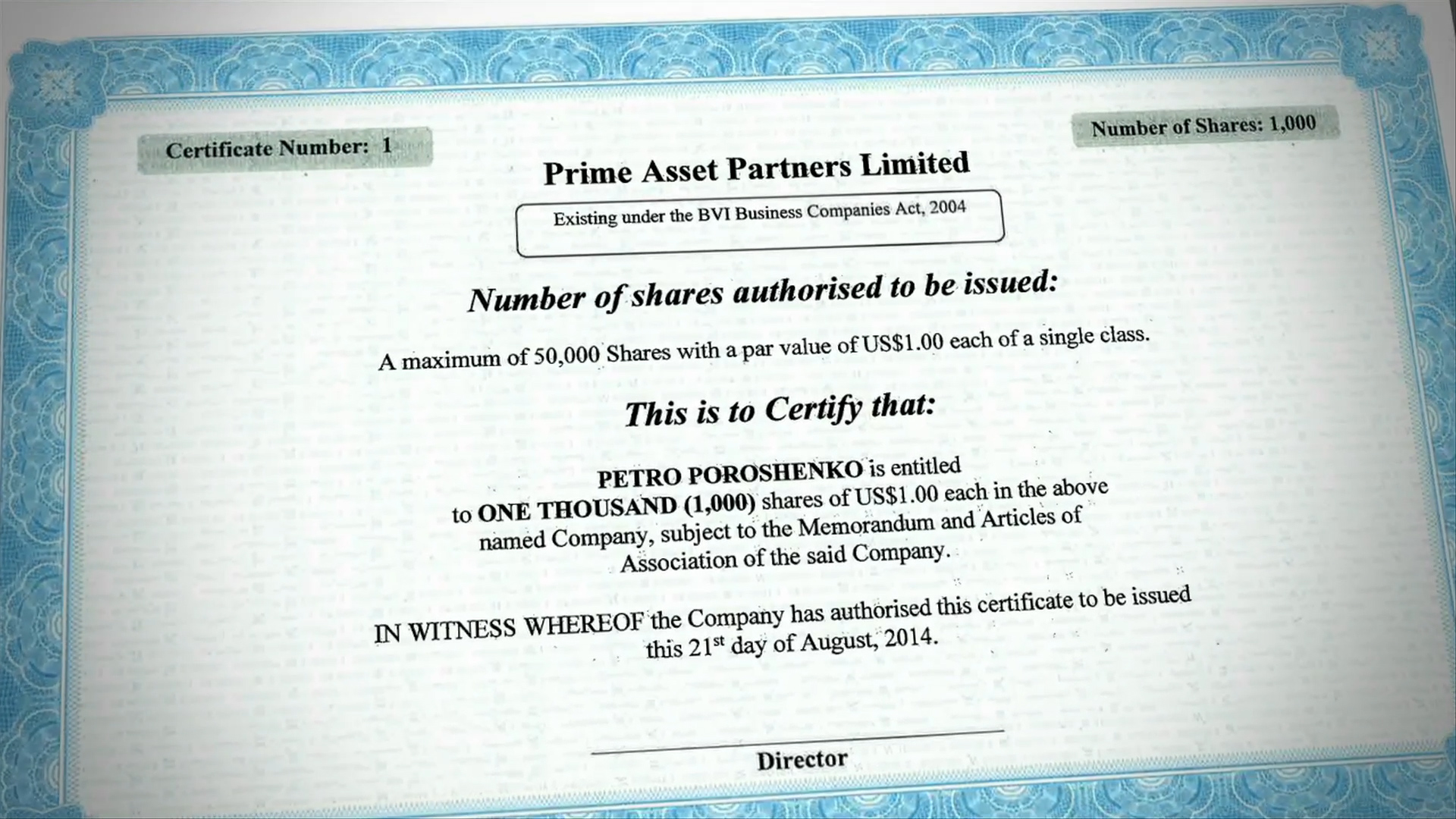 Ioannou proposed that his colleagues at Mossack Fonseca & Co, a company that registers firms,  cooperate in the creation of a new company in the British Virgin Islands. He mentioned that the owner of the company will be a person involved in politics: “This firm will be a holding company for his business and will have no relation to his political activity.” 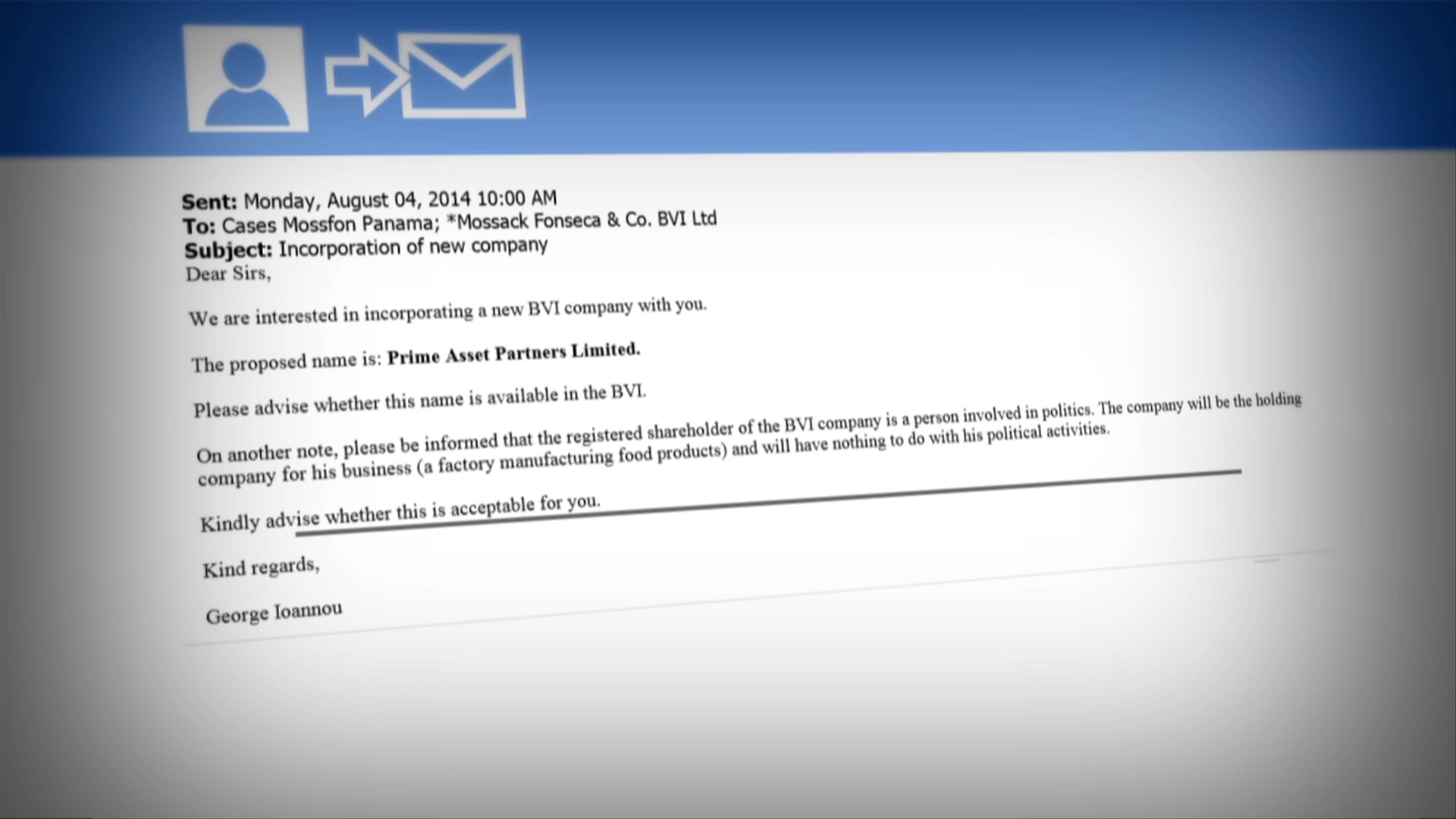 The firm Mossack Fonseca & Co, one of the largest mass registrars of offshore companies, answered to Ioannou that it was ready to cooperate and required details about the shareholder.

“Offshores are in a nutshell the companies in the following jurisdiction – the British Virgin Islands, Panama, Malta – where very flexible and simple laws on property management and company registration exist, and minimum disclosure and tax exposure remains.”

On August 21st, a new firm with Ukrainian roots appeared in the registers of the British Virgin Islands. 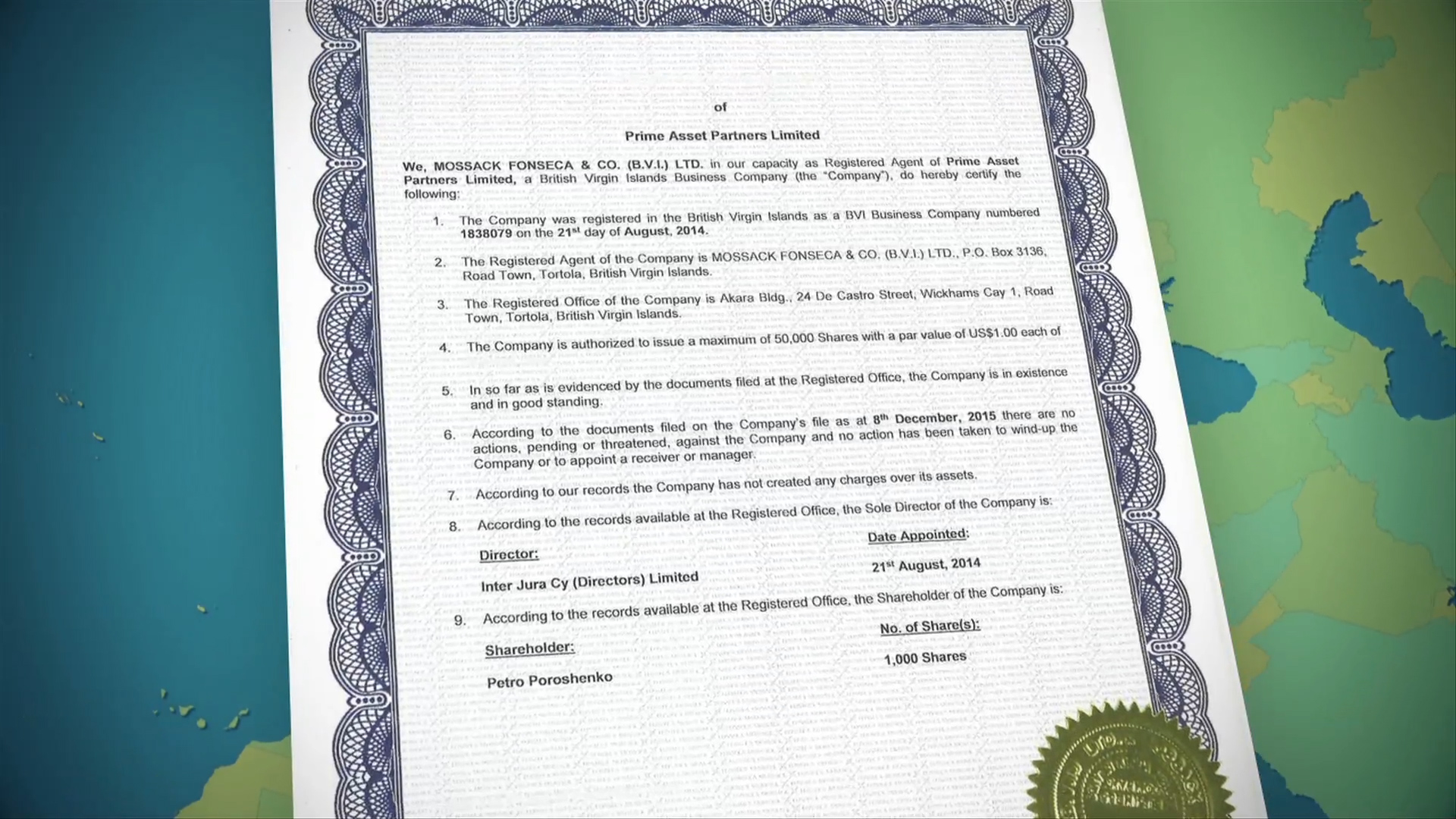 It was called Prime Asset Partners Limited. The sole owner of the company was indicated as a Ukrainian national, Petro Poroshenko, registered by the address: Kyiv, Hrushevskoho Street 9, apartment 37. A foreign passport attached to the letters leaves no doubt that it is indeed Petro Poroshenko, the President of Ukraine. Slidstvo.Info visited the apartment, no one opened the door, though.

Here's a transcript of reporter’s quick exchange with the building’s concierge:

Reporter: We went to apartment 37. Is anybody there?

Reporter: Does anybody go there?

Reporter: Do you know who lives there?

Concierge: Yes, of course. They used to live there, but don’t anymore.

From August 25th to September 1st, letters were exchanged between Tortola and Cyprus. As a result, Cyprus national Olga Georgiou was appointed as CEO of Petro Poroshenko’s newly created company.

Company registrar Mossack Fonseca is finding out the details, asking many questions. The employees are worrying because such an important client rare.  In the letters, Petro Poroshenko is mentioned as either the President or Prime minister of Ukraine.

On the morning of September 1st, an important letter with an attachment goes from Cyprus to the British Virgin Islands. It is a paid bill for 14 hryvnias and 85 kopeks for the electricity consumed by Petro Poroshenko at Hrushevskoho 9, apartment 37. This receipt proved that the beneficiary’s address was correct.

Registrars from the British Virgin Islands also asked for two letters regarding the trustworthiness of Petro Poroshenko. The first one from a bank, where the owner of the newly created offshore was a client of for at least two years. The second one from Poroshenko’s lawyer. The registrars from Mossack Fonseca had to remind Poroshenko about these letters several times.

On October 2nd, Cypriot George Ioannou finally sends a note to the employees of Mossack Fonseca.  The letter is from Avellum Partners, a Ukrainian law firm, confirming that the company has known Petro Poroshenko since 2012 and is satisfied with their cooperation.

On October 17th, the registrars at the British Virgin Islands receive a note from a bank regarding the decency of the Ukrainian president:

“Petro Poroshenko is a client of the public joint-stock company ‘International Investment Bank’ since February 25th, 2009… We confirm that this individual’s account activity was done in compliance with the bank’s requirements,” Konstantin Ludvik, the bank’s chairman wrote in the letter. 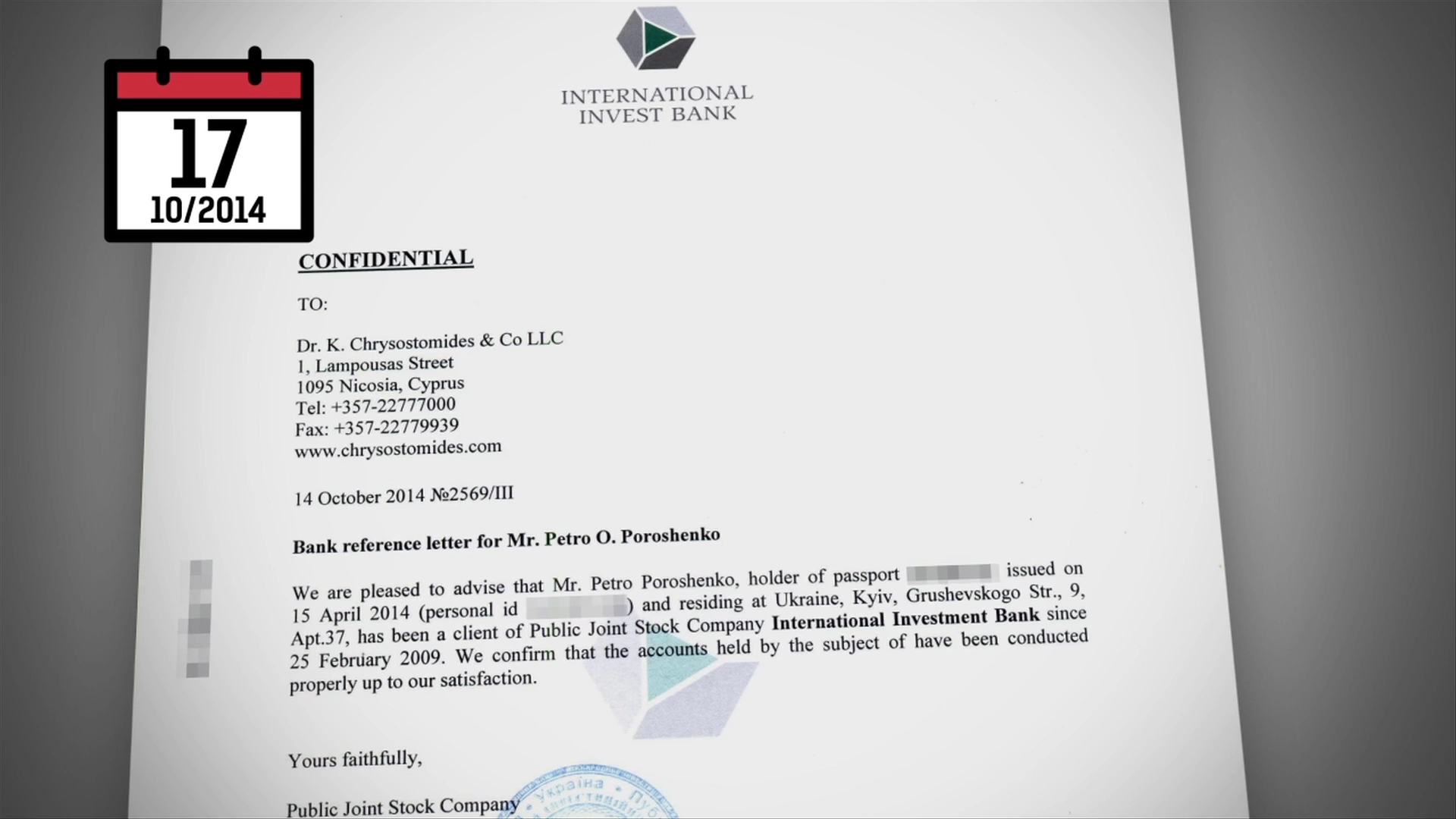 It was the bank’s main office that guaranteed the decency of businessman Poroshenko. We didn’t receive a reply to our request from there. It was probably a bit uncomfortable to respond to a request from a journalist when it’s not only about a bank’s client, but also about its owner. According to official information from the National Bank, Petro Poroshenko still owns the International Investment Bank.

On February 20th, in Tortola, employees of Mossack Fonseca decided to change the status of Poroshenko’s company Prime Asset Partners Limited “considering the high status of the company’s director.” From now on it will be attracting more attention. “In addition to the usual stuff we should check the situation in the country, whether there are any corruption scandals,” Josette Roquebert, a lawyer of Mossack Fonseca said in the letter.

“Prime Asset services the holdings of companies from Cyprus and Ukrainian companies of Roshen Group, one of the largest confectionery producers in Europe.” 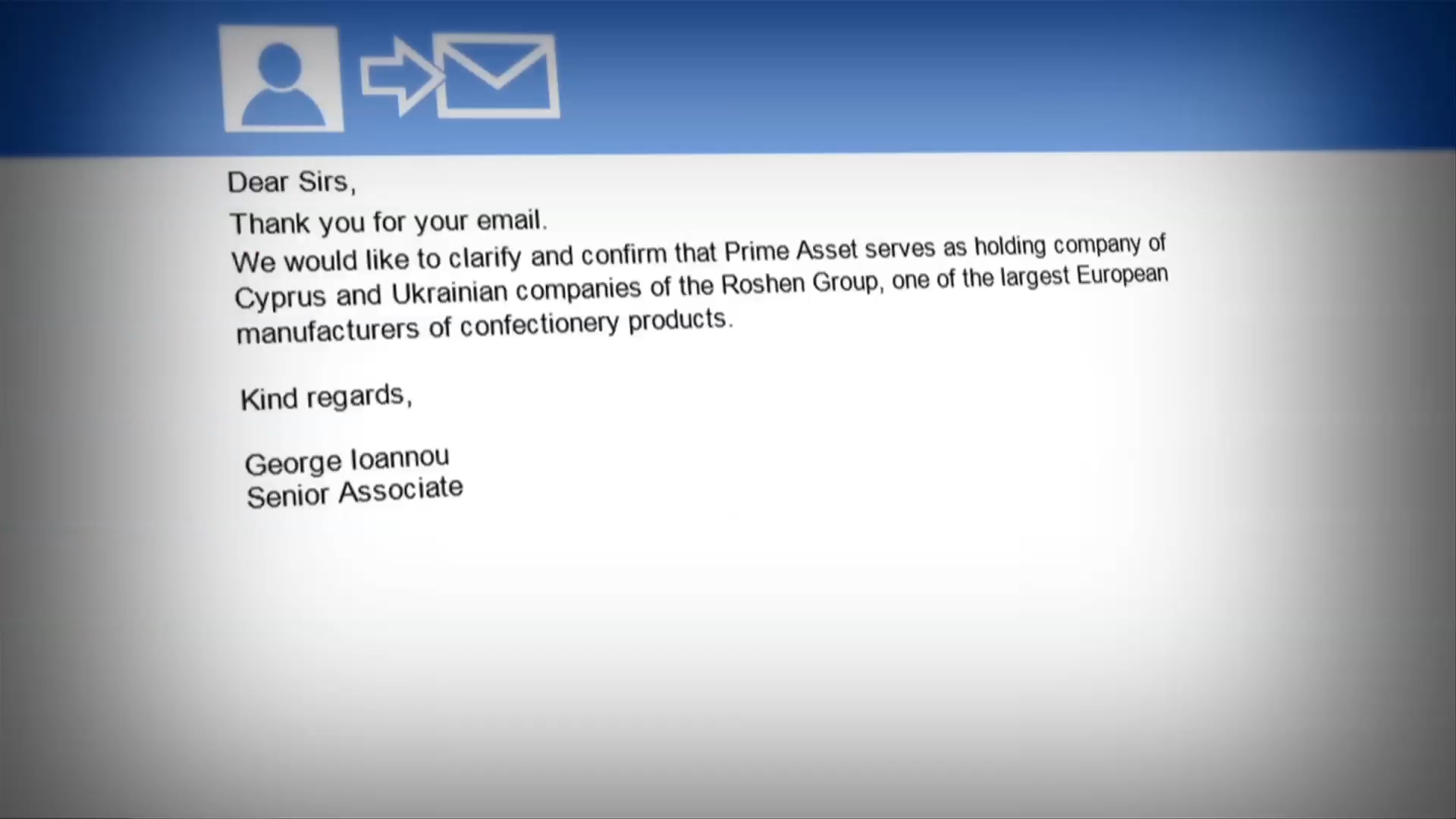 In December 2015, Cypriot George Ioannou asks his colleagues from Tortola to urgently collect all the available papers and send them by courier to Switzerland. Martin Bustle of Rothschild Trust was mentioned as the recipient. It was the end of the letter exchange. So we don’t know whether these papers were delivered to Zurich and what the purpose of it was. But in early 2016, Petro Poroshenko claimed he transferred his assets to a “blind trust.”

In December 2015, Cypriot George Ioannou asks his colleagues from Tortola to urgently collect all the available papers and send them by courier to Switzerland. Martin Bustle of Rothschild Trust was mentioned as the recipient. It was the end of the letter exchange. So we don’t know whether these papers were delivered to Zurich and what the purpose of it was. But in early 2016, Petro Poroshenko claimed he transferred his assets to a “blind trust.”

Meanwhile, we received a letter from the Presidential Administration. They advised us to address all of our questions regarding the offshore in the British Virgin Islands to Avellum Partners, which we already knew about from the letters. Initially, the firm’s employees were surprised, but later they gave us a response…Unfortunately, it didn’t vindicate the President.

First, there is no trust – neither blind nor any other. When President Poroshenko claims he signed an agreement for transferring his assets there, he’s lying. According to the lawyers’ response, the trust is still only a plan because it is being discussed only in the future tense. 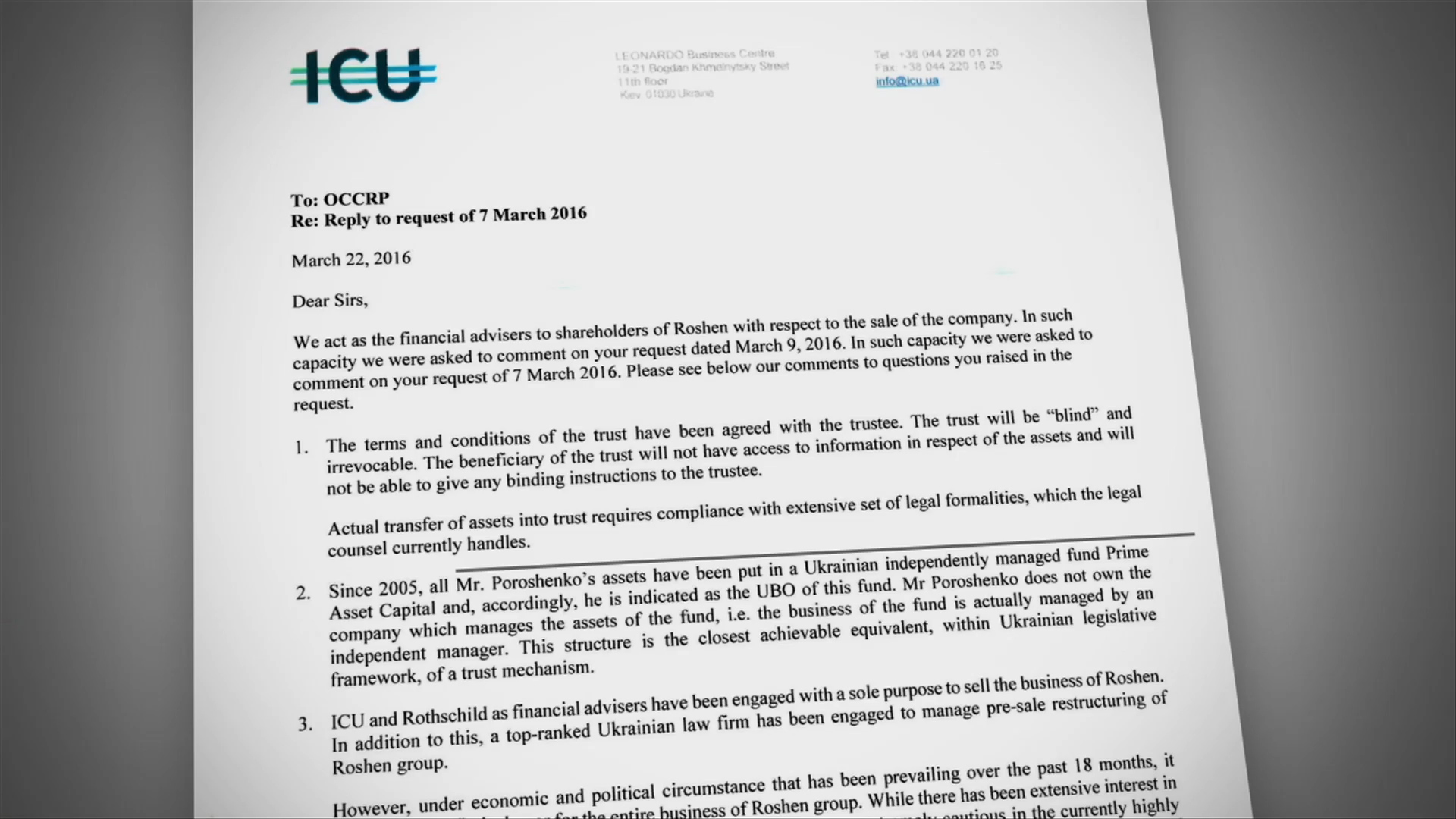 Second, Poroshenko created a company in the British Virgin Islands in order to finally sell Roshen.

In fact, the statement’s only aim is to justify the will of President Poroshenko avoiding to pay taxes. The lawyers explain that everybody allegedly does so in Ukraine. So the President also transfers his assets to an offshore zone, where the sales taxes are zero percent. 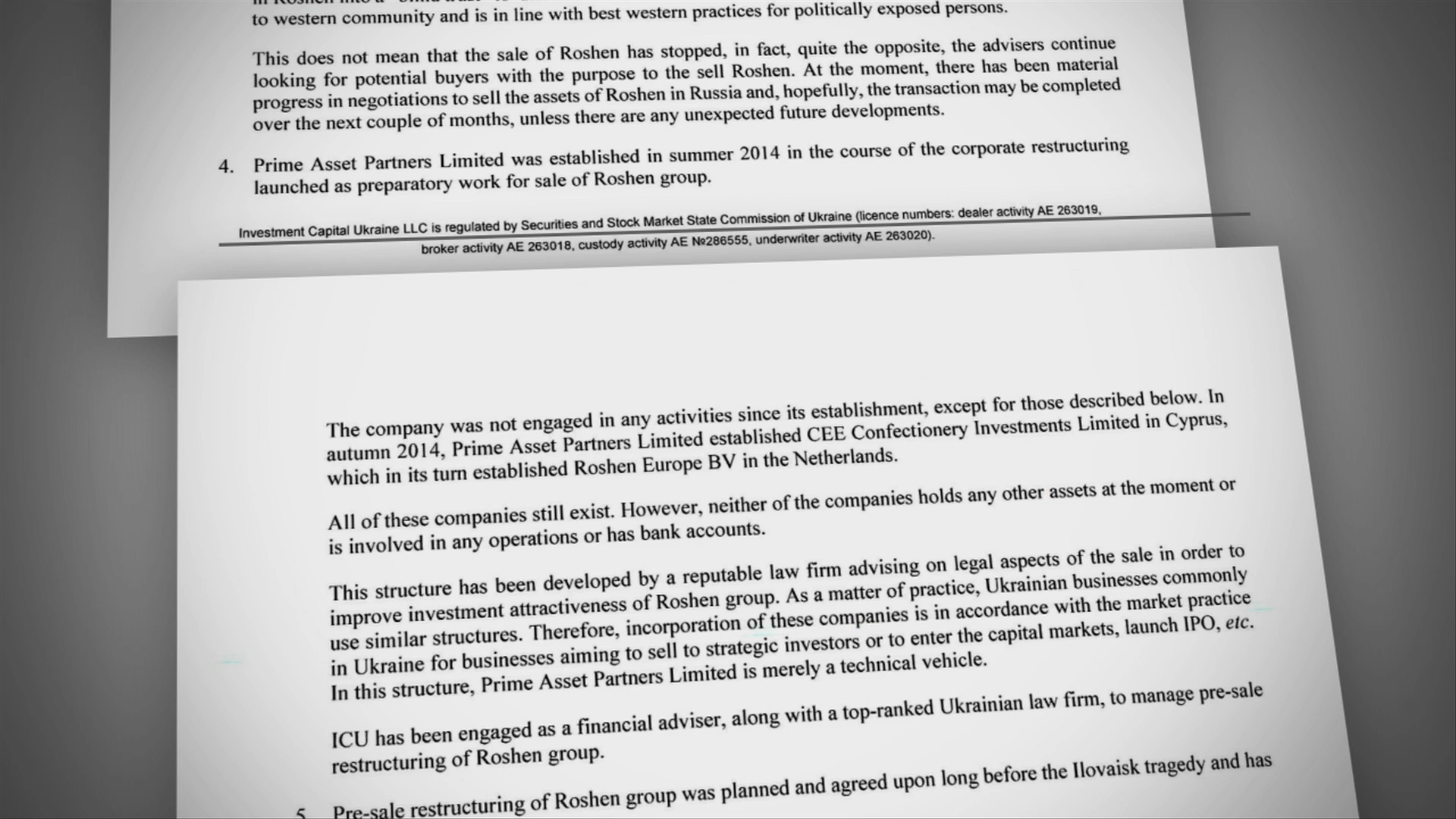 Third, the lawyers proved that Mr. Poroshenko is the only asset holder of the offshore in the British Virgin Islands and explained what is going to be done with it.

“A share in Roshen will be brought into a trust after all the legal formalities are finished.” 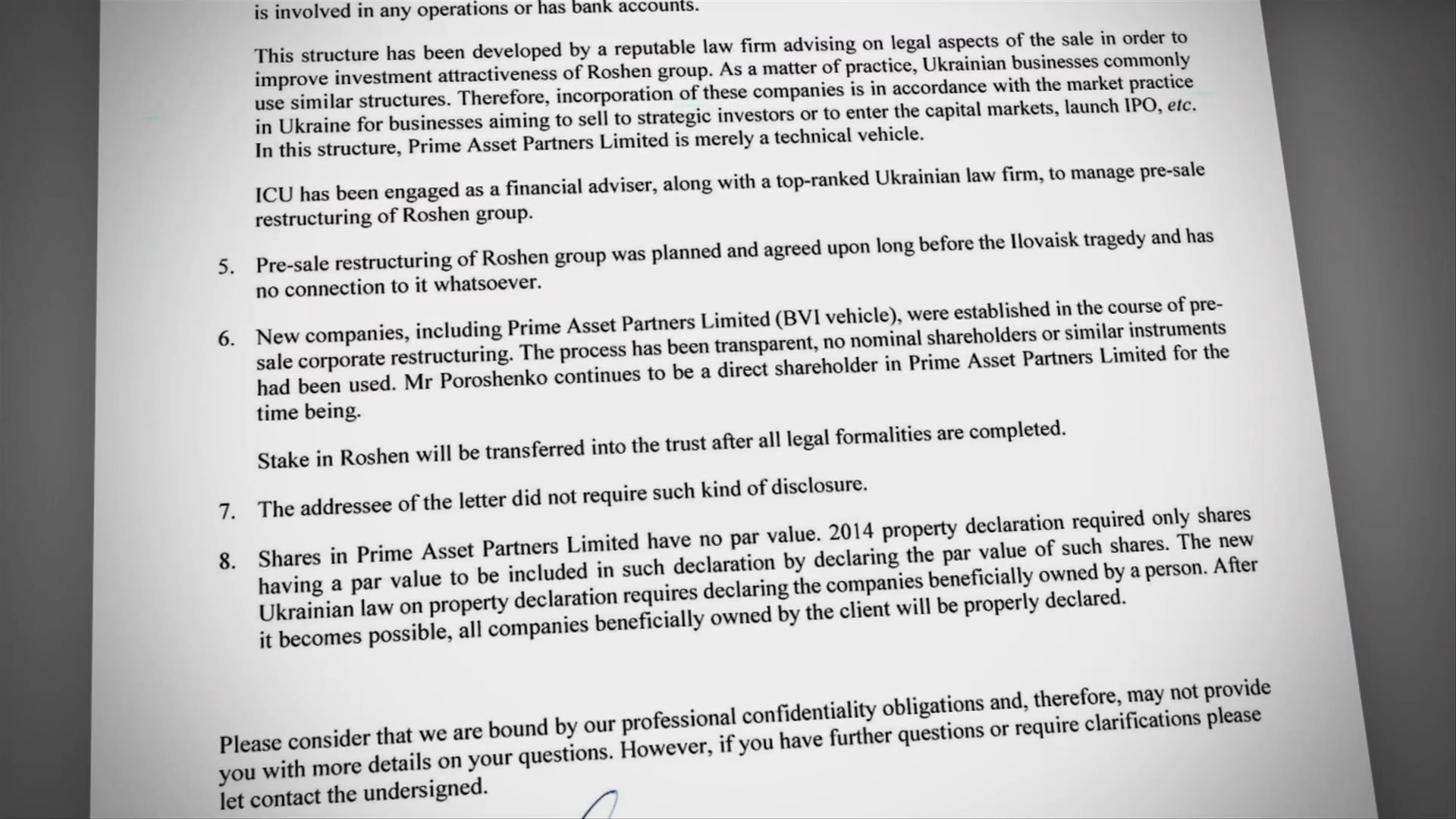 REPORTER: Is it possible to transfer a Ukrainian asset to a foreign trust?

BILAK: Well again, it depends on the situation. In fact, I don’t see any problems here…

REPORTER: Are any taxes paid when assets are being transferred to management by trust?

BILAK: Well, otherwise there was no point in creating the trust.

REPORTER: So the main idea for creating a trust is tax evasion?

BILAK: In fact, it actually is allowed, as the money is not being taxed.

When it comes to money, the president of Ukraine is ready to openly violate the law. In his 2014 tax declaration he didn’t mention the creation of his company abroad. From the response of his lawyers we read the following:

“The assets of Prime Asset Partners Limited have no nominal value. According to the requirements for the declaration of property in 2014, the information regarding stocks with nominal value had to be declared.”

Poroshenko’s lawyers are lying. Here’s the paper that proves that the President is the owner of 1000 stocks, each of them worth $1. Here’s his declaration: there is a blank space in the "Size of contributions to the charter capitals of the company, including contributions abroad."

So now we have documented proof that an agreement about the entity, where Ukraine’s President allegedly transferred his confectionary assets to, has not been signed yet. Poroshenko’s beloved “blind trust” exists only in his fantasies. In real life, the President created a company in an offshore zone in the British Virgin Islands, where he withdrew the assets of Roshen in order to avoid paying sales taxes in Ukraine. The wrapper in the form of a trust would cover the entire process. Apparently, according to the plan, nobody would have known which Roshen was being sold – the Ukrainian one or the island-based one.

Our investigation concludes that President Poroshenko was creating sophisticated financial structures to avoid paying taxes to the Ukrainian state.

The New and Old Faces of Ukraine’s Next Parliament, Explained.
3508