AP releases video from paramedic Taira's body cam, who handed over footage the day before she was captured by Russians
1166

13 people killed, over 60 houses damaged in a day In Luhansk region as a result of Russian shelling
Editors' Choice
8299

"Turn on the light on deck, get out with your hands up," is a phrase from the radio talks between the Ukrainian and Russian military on November 25, 2018, which marked the start of the capture of three Ukrainian ships and 24 sailors on board.

Near the Kerch Strait, Russian troops opened fire on the gunboats “Nikopol”, “Berdyansk”, and the “Yany Kapu” tugboat, and proceeded to seize them and the crew. Three “Berdyansk” sailors were injured. Shot holes were left in the boat.

The campaign commander Denys Hrytsenko says that the Russian military had one plan – not to allow Ukrainian ships to pass:

“When we came to the Kerch Strait, after the “Bereg-25” (‘Shore-25’), and KerchportControl determined the coordinates where we could wait for the passage to the Sea of ​​Azov, we stood at those points. I reached out to Kerch and said it was dangerous because the berthing impact on my ships continued. They replied, "Go to these points, we will not touch you." [...] Then, in my opinion, this situation was unclear for the Russian Federation, and informally they asked us to go beyond the 12-mile zone and wait. And three to four hours later, all the talks were terminated [...] I think they already knew what they would be doing," Hrytsenko recalled. 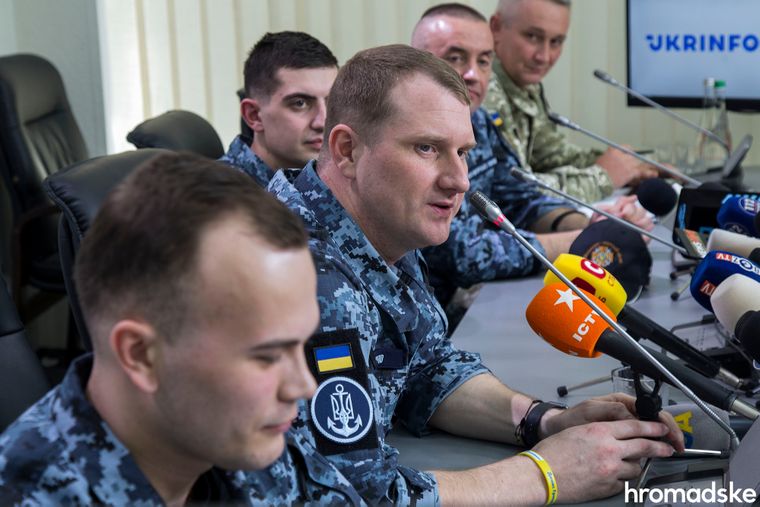 Campaign commander of "Nikopol", "Berdyansk" and "Yany Kapu" tugboat Denys Hrytsenko (center) during a press conference in Kyiv after his release from captivity, September 12, 2019. Photo: hromadske

Then the sailors were tried as an "organized crime group" in Crimea and Moscow for allegedly illegal crossing of the border. Half a year after the capture, the International Tribunal for the Law of the Sea, where the Ukrainian side appealed, held a hearing on the Kerch conflict.

Russia then refused to take part in the hearing, saying that the tribunal has no jurisdiction to deal with the incident and that Ukraine is using the situation for internal political purposes.

The hearing took place on May 10. At the time, the Ukrainian delegation noted that Russia had violated the basic principle of immunity of warships guaranteed by the UN Convention on the Law of the Sea. Kyiv stressed that the boats were detained on November 25, 2018 in the territorial waters of Ukraine. But Russia's actions would, in any case, violate the Convention, even if it were territorial waters of the Russian Federation – foreign law enforcement officers and nationals subject to foreign court jurisdiction cannot arrest other countries' warships and their crews. The report of the Ukrainian Navy and the documents attached thereto confirmed that the Ukrainian ships were making a peaceful transit between the two Ukrainian ports.

In addition, Russia opened fire on boats, which is evidence of aggression, assured the Ukrainian side, demonstrating this photo.

The Ukrainian side also stressed that Russia had deprived Ukraine of ships used to support the country's national defense.

On May 25, the International Tribunal for the Law of the Sea upheld Ukraine's lawsuit and ordered Russia to immediately release the ships and 24 members of crews. The Ministry of Foreign Affairs of Ukraine expected that the Russian Federation would execute this decision within a set period – within a month. However, this did not happen. Ukraine emphasized that while Russia is not complying with the decision of the International Tribunal, it is outlawed at sea.

"The peculiarity of the law of the sea is that there are daily rules that are used by all ships without exception, including Russia. Obviously, they cannot outlaw themselves in all maritime issues: freedom of navigation, naval and civilian ships,” the Foreign Ministry assured.

Ignoring the Tribunal's decision threatened Russia with the extension of sanctions, the deterioration of its reputation among other countries. It could pose an economic and political threat, including for the safety of cargo transportation, commercial and state Russian ships.

"Failure to comply with the Tribunal’s order could be used for political purposes by Western countries to strengthen sanctions, including those relating to the NordStream, other infrastructure projects and the economic security of Russian ships. In addition, it would severely limit the right of the Russian Federation to go to court if necessary,” said the lawyer of Ukrainian sailors Nikolai Polozov.

The situation resembles the case of “Arctic Sunrise”, a Dutch vessel where Greenpeace activists staged a protest near the Russian drilling platform in the Pechora Sea in 2013. Russian coastguards detained the ship and arrested all crew members and passengers.

Then the authorities of the Russian Federation also refused to participate in the hearings of the International Tribunal, as well as to execute its decisions. But after a while, Russia did release the captured activists and paid the Dutch government compensation of several million euros.

However, Russia took its time with the return of Ukrainian ships. From time to time, the Crimean media reported disappearance of ships from the port of Kerch, and subsequent reappearance. Russian investigators stressed that the vessels were evidence in the case they continue to investigate against the Ukrainian military.

On September 7, a large exchange of prisoners took place. The sailors returned to Ukraine, but without the ships.

On September 17, the press service of the Border Guard Service of the FSB of Russia in the Republic of Crimea stated that three Ukrainian ships would be handed over to Kyiv as per the agreements reached by Russia and Ukraine.

The seamen’s lawyer Polozov stressed that Russia is thus simply masking its actions, and it is actually obliged to comply with the Tribunal's decision:

"I am certain that after the transfer of the ships, the Russian authorities will submit to the court [International Tribunal – ed.] a report on the implementation of this order," he told hromadske.

Earlier, Naval Forces Commander Ihor Voronchenko explained that Russia had provided false information to the International Tribunal for the Law of the Sea on the return of captured Ukrainian ships - after the release of Ukrainian sailors on September 7, it stated that it had also returned the ships. The commander assured that Russia did not want to return them as they were evidence of aggression for the court.

"Well, can you imagine, if they gave us the “Berdyansk” boat with a shot hole, what would happen?" Voronchenko said.

Lawyer Polozov added that traces of aggression could disappear from the captured vessels:

“I know that the Russian side carried out some repair work on the ships. Whether it concerned prevention work for the forthcoming handover or elimination of traces of aggression – I can’t say. I think Ukrainian specialists will be able to answer these questions after receiving the ships,” the lawyer said.

Even after the release of the sailors and the return of the ships, the conflict between Ukraine and Russia is not settled. The main dispute over the immunity of three warships and crew members will, in fact, be considered by another judicial authority – the Permanent Court of Arbitration of the International Court of Justice in The Hague. The first hearings took place on November 21-22. The process can take several years.

Built in 1974. It belonged to the 171st group of the division of naval and river vessels of the USSR. It was based at the Crimean Naval Base (Donuzlav Lake). After the division of USSR’s Black Sea Fleet, the boat joined the Ukrainian Navy under the name “Krasnoperekopsk”.

In 2015-2016 it was repaired in Odesa. During the decommunization, it was renamed "Yany Kapu".

The small artillery ship "Berdyansk" was built in 2012 at the Kuznia na Rybalskomu plant in Kyiv. Launched in 2015. It is part of the 24th division of riverboats. In November 2016, it passed the state tests.

On December 31, 2017, the “Ackerman” and “Berdyansk” armored vessels took part in the special operation together with the “Pryluky” rocket launcher and the State Border Guard Service marine security boat. They detained a contraband vessel near Odesa.

It belongs to the second batch of small artillery ships. Compared to the first batch of armored vessels, about 70 design changes were made. It is part of the 24th division of riverboats. On December 5, 2017, the naming ceremony of four newly built boats took place: "Vyshhorod", "Kremenchuk", "Lubny" and "Nikopol". “Nikopol” became part of the Navy of Ukraine on July 1, 2018.