donate
Hromadske UAHromadske RU
AboutWhere to watchAuthors
Contacts
Ukraine
“People were without eyes and limbs. We took them from alleys, parks, playgrounds” – paramedic from Mykolaiv
952
Trending
3485

New aid to Ukraine from the USA, shelling of Ukrainian cities, and another decree of Putin: the last night’s highlights
2701

A Hello to Arms: Is There a Black Market for Guns in Ukraine?
8552

Mykhailo Kotliarov, a paramedic from Mykolaiv Photo: provided to hromadske

24-year-old Mykhailo Kotliarov works as an emergency paramedic in Mykolaiv. We spoke to him right after his day shift, which, surprisingly, has been uneventful, with no calls for gunshot wounds. “Knock on wood,” says Mykhailo.

He started to work at age 20, straight out of vocational school. There was an outbreak of measles in Ukraine at that time, and later the coronavirus pandemic. And since February, a full-scale war began. There were visits to places after shelling, dozens injured by shell fragments, and children's deaths.

Together with the project “Thank you from the heart”, hromadske tells the story of Mykhailo. The following is his direct speech.

500 meters across the minefield

We were preparing for the coronavirus pandemic: we stocked up on masks, suits, and personal protective equipment. And no one thought about the war at all, so its beginning was unexpected and scary for us.

Most of my colleagues remained in Mykolaiv after February 24. Some moved to live in the hospital because their villages were occupied by the Russians. I have never had thoughts of leaving the city the whole time. If we, the doctors, leave, who will work?

Of course, the easiest thing is to leave everything, say, let someone else do it because my life is the most important. And what about those guys sitting in the trenches, aren't their lives important?

The first call-up, which was different from all the previous ones – from visits to elderly people with high blood pressure or sick people with fever – was two weeks after the beginning of the full-scale war. The people in the car were blown up by a mine.

It happened in the area of one of the enterprises outside Mykolaiv. By that time, the Russians had already occupied many villages near the city and were actually standing near Voznesensk.

We stopped 500 meters from the blast site. There was a railway road ahead, and our car would not have been able to pass there. We were accompanied to the place of the explosion by territorial defense fighters, we followed each other, without taking a single step to the side because everything around was mined.

Only the engine remained from the car in which the people were blown up, the door was hanging from the tree on the forest plantation. All the metal was scattered for 20-30 meters around.

Next to the car lay the body of the first boy, he had no arms or legs. The other was on the hill, his body burning in the dry grass.

We went on like sheep, not understanding at all what was happening and what we were doing here.

We saw that the third boy was also thrown on the hill by the blast wave. He had several fragment wounds, an open craniocerebral injury, and his internal organs were bruised. He lay and moaned. He needed to be taken and urgently transferred to our car to provide adequate assistance. But there was a risk that there was a mine under him. When the body was checked, we put him on a stretcher and carried him to the car along the same route.

The fourth guy was found 20 meters away in the forest plantation, he had no arms and legs. 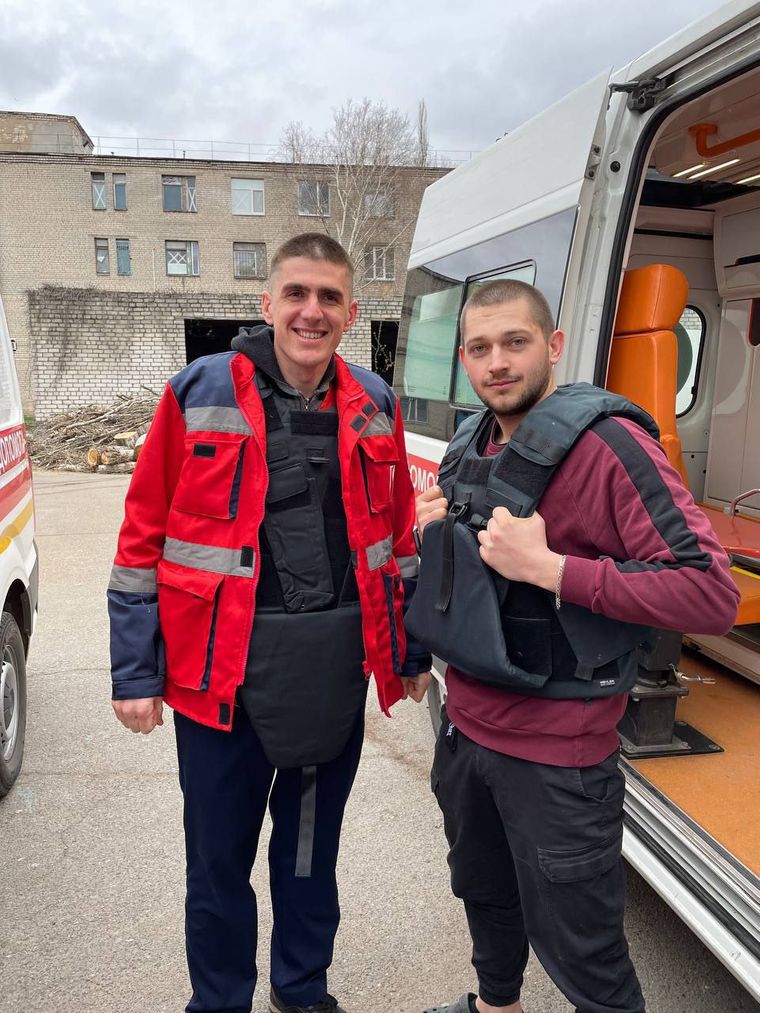 Mykhailo with his partner, with whom he walked through the minefield to the blown-up car

“I thought that was probably it, but I'd just wrap his leg while I could”

After that, the Russians started to shell Mykolaiv with Smerch MLRS. We often had to go to people with fragment wounds. There were many people with injuries: without arms, eyes, and legs. We took them from alleys, parks, and playgrounds.

Our brigade works in the Korabelnyi district (the district of Mykolaiv, which is shelled the most — ed.), and we also serve nearby villages and the entire district, which is a part of Kherson Oblast.

One day we were going to the village of Zelenyi Hai on a call. An artillery shell flew into the house where the young man lived. His leg got stuck, and his femur was crushed. Neighbors barely managed to pull him out of the house and took him to their place. There was no signal, so the locals climbed a tree to call an ambulance.

We went there at our own peril and risk. On both sides of the road, we saw knocked-down hardware and tank towers. In the end, we drove to the village, where locals met and took us to the wounded man's house.

The nurse and I began to provide first aid, anesthetized, and immobilized the limbs. And suddenly I heard a distant noise. I looked out the window: everyone was running to the basement for some reason. I looked at my colleague, and he smiled. “What? — But there are planes. — What planes?” And I immediately heard the whistling of missiles launching. There were four extremely loud explosions, I have never heard such in my life.

But at that moment I felt no fear. I thought that was probably it, but I'd just wrap the injured leg while I could. When everything stopped, we quickly put the man into the car and took him to the nearest hospital, where he was treated. 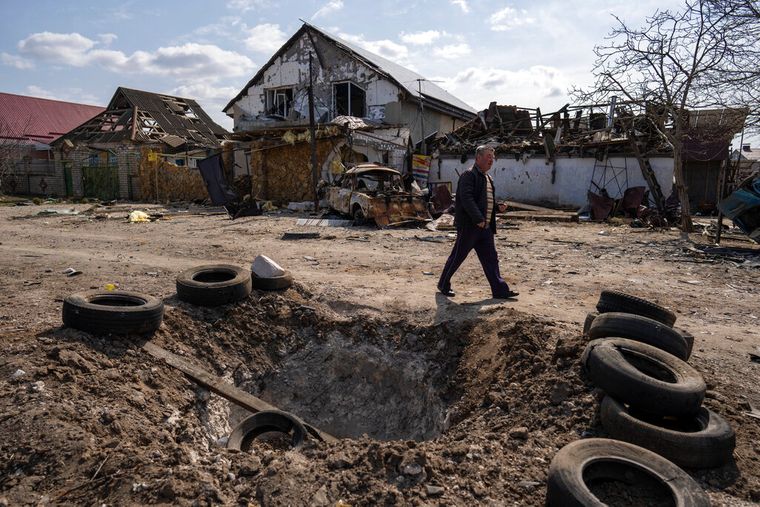 A man walks past a bomb crater in Mykolaiv Oblast on March 25, 2022

At the beginning of a full-scale war, logistics were terrible, of course. The dispatchers gave the address, and it was not even clear who was standing there - ours or the Russians.

We could even be told: “You sneak up quietly and take a look. If they suddenly start shooting, turn around and drive. Be as careful as possible.”

We did not understand what the situation was. What if there are hostilities? What if there are many wounded? What should we take with us, and what to prepare for? Should we wear bulletproof vests? Who is standing there? The gray zone then began 200 meters from the city borders.

However, we always tried to get to the right address, despite the shelling. On the spot, it was possible to lie under a fence, in a ditch, on a forest plantation, or in some kind of building, while cluster shells were exploding around.

It happened that people were taken out of houses on the door because we did not have time to take the board from the car for transportation.

But there was never a time when we didn't get there because of shelling or because of something scary. If a person is lying there without an arm or a leg, aren't they scared? The main thing for us is to work with a cool head.

There were a lot of deaths during the coronavirus pandemic. There were carts with corpses in a queue at the morgue. Sometimes there were not enough of them, and people were piled up. We were afraid of everything even back then.

The only thing you can't get used to is the deaths of children. It is very scary when missiles hit playgrounds and kindergartens. This makes the blood run cold in your veins.

Once we went on a call 15 kilometers from Oleksandrivka (urban-type settlement in Voznesensk Raion, Mykolaiv Oblast – ed.). The call was made around midnight. We came there as quickly as possible, ran into the house, and saw a man about 50 years old lying. A fragment from a cluster shell did not break the bone on the leg, it entered the soft tissues. I thought we were lucky, maybe he would reach the car himself.

And suddenly the cannonade started again. We fell down in a small house with an area of 2 by 2 meters: me, the nurse, the wounded man, and his wife. When the shelling stopped, we put the man into the ambulance and left.

Currently, territorial defense fighters, police, and military medics work in such front-line villages. They have better cars, armored ones. Our cars, as if made of foil, are riddled with bullets.

Moreover, we don't have helmets at all, and the bulletproof vests we were given won't protect us from flying fragments. Their plate is half the thickness of a pen. I look at them and realize that my frying pan is thicker at home. We wear them only for night trips so that it is not so cold.

(The Ministry of Health explains that they provided ballistic bulletproof vests to medics, which really do not protect against close-range shooting, but protect from fragments. They emphasize that it would be difficult for medics to work in vests of a different class.) 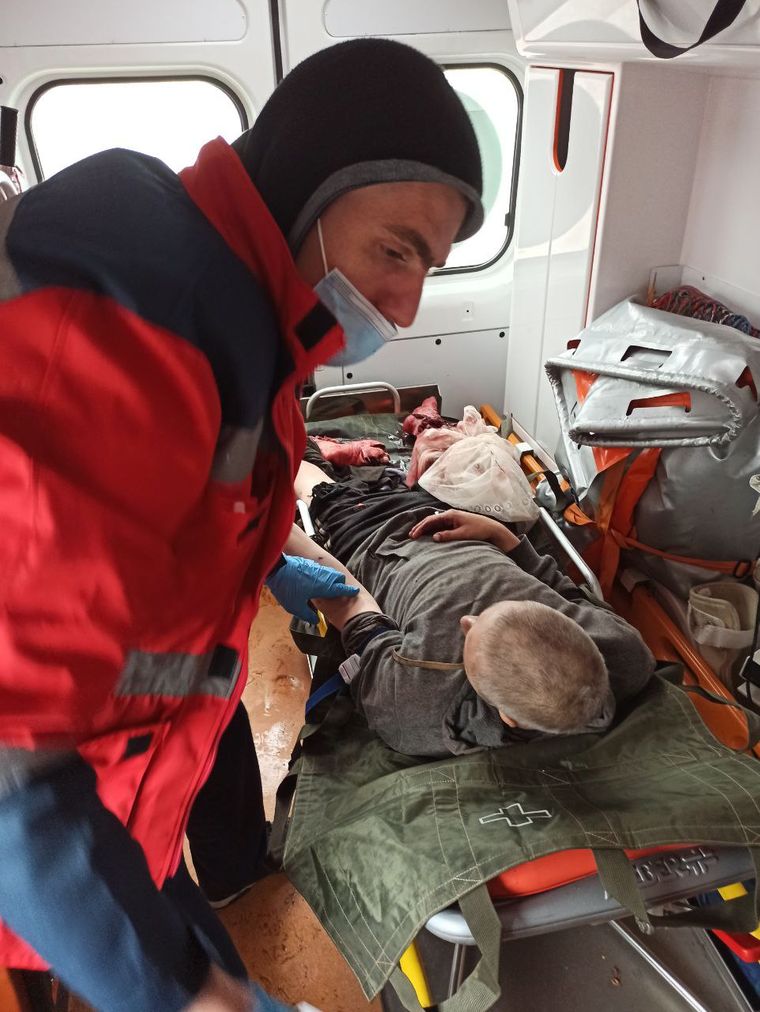 Photo taken by Mykhailo, in which his partner provides medical aid to an injured man

“You think, probably, that's all for today. And they keep shelling and shelling.”

My worst shift was when they started shelling at 8 in the morning and finished at 6 the next day. I received a call, went there, collected the wounded, and in 40 minutes, there was shelling again and the wounded again. I went again, collected hands and feet from people, and brought them to the hospital. You think, probably, that's all for today. And they keep shelling and shelling.

I remember we went on a call in the Korabelnyi district. Shelling began, and the man came out of the house to look. He opened the door, and a fragment flew into his chest. We arrived, confirmed the death, arranged everything, and were about to leave when we heard from afar how cluster shells began to explode outside the area.

We quickly left and repeated volleys were going from the place where we were just a moment ago. Whom did they want to hit? There are only detached houses, the church, and the school. We quickly gassed up, arrived at the station, and hid in the hospital.

It's scary at night, when there's an air alarm, and you've just returned from a call, you go upstairs and think: they hit that hospital, and another one, and what's the next one?

Our ambulance station rents one floor in the hospital – shells were hitting there too, four months ago there was a cluster shelling. Now, in our working room, the window is blocked with a chipboard.

But the scariest thing is airplanes. Cluster shells have been hitting since the first days of the war, just like artillery, we are used to them. The rule of two walls or a basement saves. And planes and S-300 missile systems demolish buildings to the ground.