Ukraine may get fighters and tanks from Slovakia
1932

The commander of the Belarusian battalion Volat, who defended Ukraine, died in the battles for Lysychansk
Editors' Choice
8543

“Our Kids”: Crimean Resistance to Political Arrests In Numbers
8181

President Volodymyr Zelenskyy has appointed the new head of his Office replacing Andriy Bohdan with Andriy Yermak. Previously, Yermak was a non-staff advisor to the president and Zelenskyy’s negotiator with the U.S. and Russia. It is not clear whether Bohdan will get a new position from the president and whether he will remain within Zelenskyy’s team.

Bohdan is the first Zelenskyy's closest associate to be fired by the president. Hromadske looks at why this happened and what Yermak’s appointment could change in Ukraine’s internal and foreign policy.

“Zelenskyy is sick of negativity and very tired,” said Bohdan in October 2019. Three months later it turned out that Zelenskyy was tired of Bohdan.

“There are conflicts. They disturb our work. I am always against such conflicts as they have no winners and no draws. Unfortunately,” President Zelenskyy said when explaining why he had fired Bohdan.

In less than 10 months of Zelenskyy's presidency, Bohdan has earned a reputation of a “conflict man”. He was rude with journalists, quarreled with SBU chairman Ivan Bakanov over staff appointments, and fought with mayors of Kyiv and Dnipro Vitaliy Klychko and Borys Filatov.

However, this is only the tip of the iceberg. Media have reported the backstage rumors of Bohdan's conflict with Zelenskyy’s aide Serhiy Shefir and influential Interior Minister Arsen Avakov, as well as with Yermak.

The reason for Bohdan's constant conflicts lies in the combination of his temper and the task he set for himself.

"The essence of my work is to synchronize the work of different government bodies – ministries, the Cabinet of Ministers, the Verkhovna Rada," he said in an interview with Ukrayinska Pravda.

Informal meetings of the leadership of the government and the Parliament, which take place at the Presidential Office every Monday at 5 p.m., became the embodiment of such “synchronization”. During these meetings, the President gives tasks to the parliament’s speaker and the prime minister who are not legally subordinated to him. And Bohdan considered it his duty to control the accomplishment of these tasks. And usually, he didn’t choose his words.

Bohdan also served as a “bridge” between the International Monetary Fund and oligarch Ihor Kolomoisky, whose lawyer he was before joining Zelenskyy’s team.

The IMF and Kolomoisky are expecting from Zelenskyy the opposite. The oligarch expects if not regaining ownership of PrivatBank, but at least receiving considerable compensation from the state because of the nationalization of his main asset. And not to return PrivatBank to Kolomoisky is a key condition for a new $5 billion IMF program for Ukraine.

Bohdan met with ambassadors of the G7 countries and assured them on behalf of the Presidential Office that PrivatBank won’t be returned. At the same time, he continues to talk to Kolomoisky. 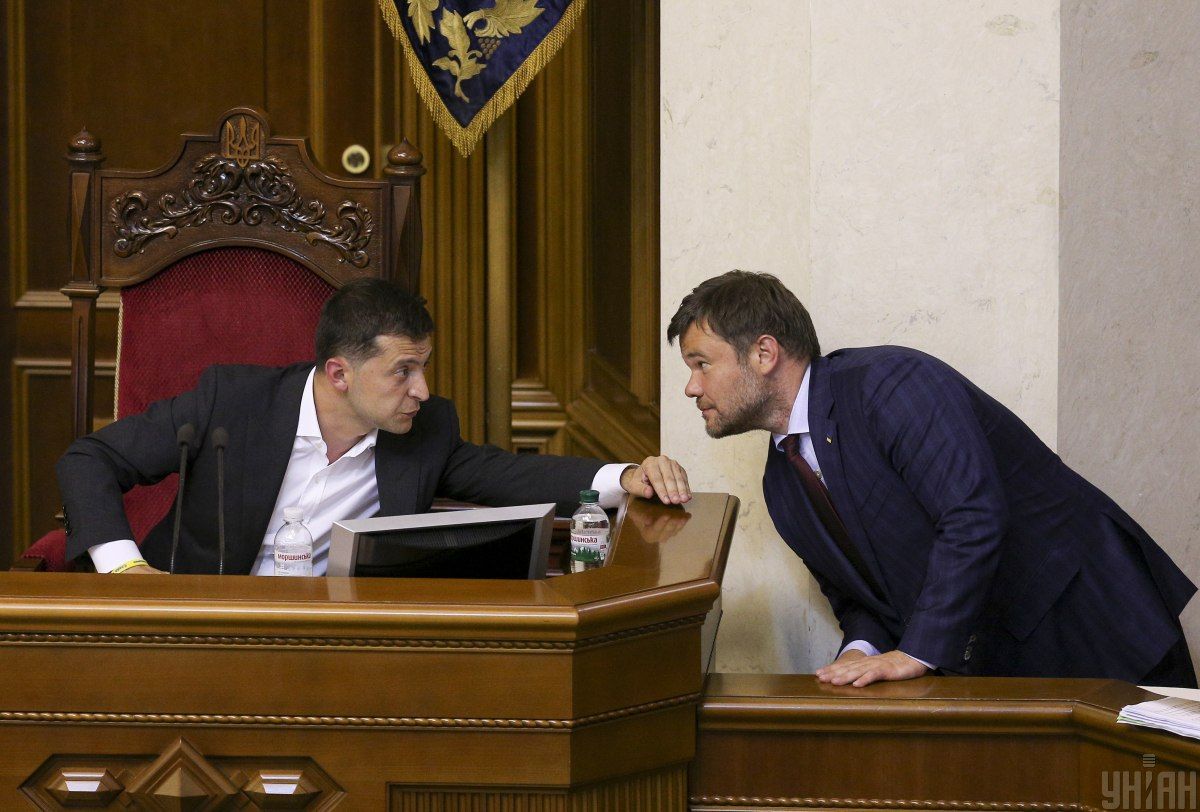 President Volodymyr Zelenskyy (right) and the former head of his Office Andriy Bohdan during a parliamentary meeting on August 29, 2019. Photo: Volodymyr Hontar / UNIAN

Bohdan's dismissal comes amid complications in relations with Ukraine’s international partners. The G7 ambassadors are concerned about another attempt by MPs to fire the head of the National Anti-Corruption Bureau of Ukraine (NABU) Artem Sytnyk. The adoption of the land reform, another fundamental IMF’s requirement, can be delayed by two months. And changes to the text of the draft law which forbids to return the banks to their former owners may directly affect the situation around PrivatBank.

Bohdan's successor, Yermak, used to be Zelenskyy’s mediator. As a non-staff advisor, he was responsible for organizing a meeting between Zelenskyy and U.S. President Donald Trump. At the same time, Yermak was Zelenskyy's chief negotiator with Russia. He actually succeeded Viktor Medvedchuk as the main negotiator for the prisoner exchanges.

We can say that Yermak managed to live up to his task as 35 political prisoners in Russia and 76 prisoners in the so-called “DPR” and “LPR” returned to Ukraine last year. As a Donbas issue negotiator, Yermak, who once did business in Russia, is talking to Dmitry Kozak, deputy head of Russia’s Presidential Administration. 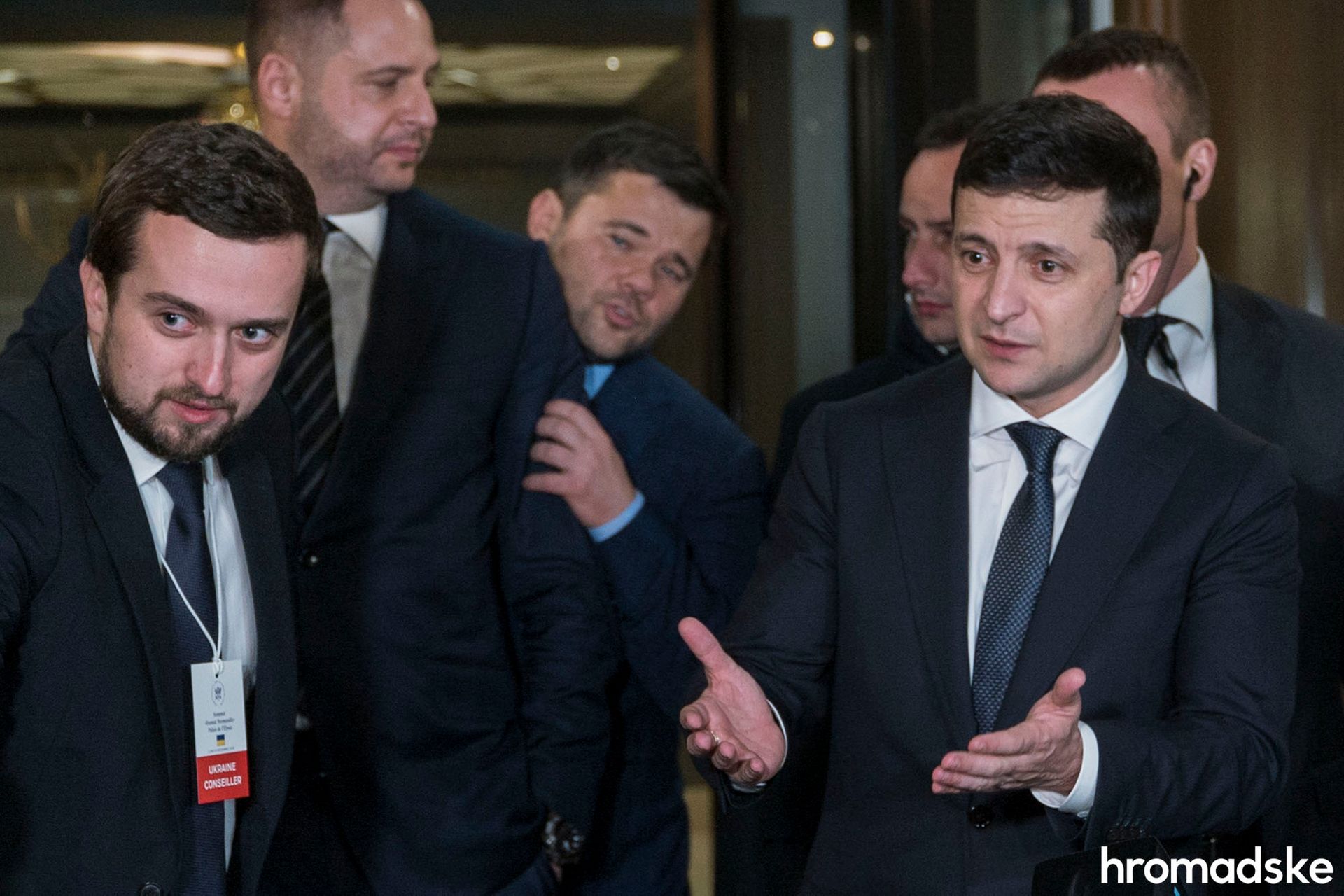 Yermak does not talk too much about the details of the talks with the Russians. But one can learn about his negotiating style from the talks between Zelenskyy’s team and President Trump where Yermak had been negotiating with Trump’s lawyer Rudy Giuliani.

Yermak has demonstrated that he can calmly take his time when, for more than a month, he could not agree with Giuliani on the text of the statement that the President of Ukraine had to make at the request of the Americans about the alleged involvement in corruption of Trump's political rival Joe Biden. Zelenskyy’s team agreed to the version of the statement advantageous to Trump only after it became clear that Ukraine could lose $350 million in U.S. defense assistance.

In the end, an anonymous whistleblower rescued Ukraine from interference in American politics by reporting Trump's pressure on the Ukrainian president. After that, Trump unblocked the assistance, and Zelenskyy never made the statement.

READ MORE: Servant of the People in a House of Cards: The Ukrainian Side of Trump’s Impeachment

As the head of the Presidential Office, Yermak turns into a high-ranking official. So now he has to decide whether to run the Office as Bohdan did or to redesign its work.

Another question is what to do with people who have been appointed thanks to Bohdan – to build relationships with them or to seek them to be fired by the president. Among others, Prime Minister Oleksiy Honcharuk's fate is on the line.

The Sunday Show: How Did the New Government Look?
3092
Society