donate
Hromadske UAHromadske RU
AboutWhere to watchAuthors
Contacts
Economy
Oil Price Is Negative for the First Time: What Happened and What Does it Mean for Ukraine?
1285
Trending
6184

The Constant Need to Prove Something. Living With Down Syndrome in Ukraine
15063

EXCLUSIVE: The True Cost Of Remaining Ukrainian in Crimea
6567

A historic "Black Monday" occurred on the U.S. oil market on April 20: West Texas Intermediate – a type of crude oil used as a global benchmark – prices dropped to zero and then turned negative. This drop also affected other brands of oil, including European Brent and Russian Urals. We looked at what it means and how cheap oil will affect Ukraine.

Why did oil prices go "subzero"?

A new economic crisis has started in the world, triggered by the coronavirus pandemic. A large fraction of industrial companies were forced to quarantine, passenger air transportation has disappeared, and other sorts of transportation was also restricted. All this has affected the demand for oil. According to International Energy Agency estimates, global oil demand may fall by 30% due to COVID-19 and consequent quarantine. At the same time, since the beginning of the pandemic, the largest oil exporters, the OPEC+ (Organization of the Petroleum Exporting Countries plus Russia) countries have not only not reduced their oil production –  they have even increased it.

Production growth began with a conflict between Russia and Saudi Arabia, the unofficial OPEC leader. The two states could not agree on a reduction in oil production, and later Saudi Arabia, to force Russia to sit down to talk, started playing the Russian roulette with the oil market – its oil exports increased sharply and the Saudis began selling it to Russian customers at a discount. As a result, there was an unprecedented fall in global oil prices. The economies of the oil-exporting countries started suffering, which is why OPEC+ countries eventually started talking and agreed to reduce production by 9.7%.

But even with this reduction, there is still too much oil in the world, and there is simply not enough space to store it. This led to traders on the commodity markets (where oil is traded) to start liquidating oil futures, scheduled to be delivered in May, on April 20.

A futures contract is a type of asset that helps oil traders fix oil price at a specific date in the future. Oil futures - the primary way oil is traded - now have negative prices because it’s holders now have to collect the oil specified in the contract as early as April 21.

Oil traders are often stock exchange speculators who have nothing to do with the use of real oil and, accordingly, do not have anywhere to store it. So, according to CNN, they started offering money to buyers, so that they would not have to worry about transporting, storing and using their purchased oil. 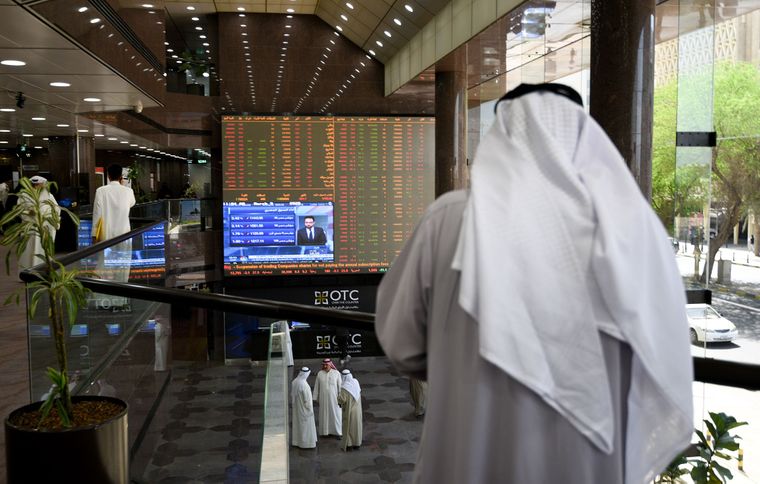 Securities traders inside the Kuwait Stock Exchange hall, Kuwait City, March 9, 2020. The crisis caused by the coronavirus pandemic has also affected the economies of the Persian Gulf, including the oil industry. Photo: EPA-EFE / NOUFAL IBRAHIM

Does this mean you can get free money from oil traders?

In reality, oil prices have only plunged for May futures. Real oil still has a positive value. Prices fell only on paper, explains Director of the A-95 consulting group Serhiy Kuyun.

"Prices fell only on options to buy this oil, i.e. ‘on paper’. The palpable, tangible oil still costs as much as it did. But the sellers, who currently have the resources to collect it, run the risk of simply having nowhere to store it,” Kuyun told hromadske.

Despite the sharp fall in May futures prices, oil shipped in the coming months is still worth $20-30 a barrel. That is, you still need to spend money to buy it.

How will cheap oil affect Ukraine?

The situation with May futures for U.S. oil is a testament to the fact that its supply on the market far exceeds demand. Therefore, oil prices will remain low for a long time, says Kuyun. And for Ukraine, it is an advantage.

“For Ukraine, low oil prices are a plus because we are, for the most part, an importing country. This means that we will spend less money to buy oil and energy, less foreign currency will leave the country,” he said.

This opinion is seconded by The National Bank of Ukraine (NBU). In its reports, the NBU notes that cheap oil has a positive effect on Ukraine's trade balance: less foreign currency is spent on imports, while export revenues will suffer only a slight fall. Therefore, the economy has more foreign currency, which contributes to the strengthening of the hryvnia.

At the same time, low oil and energy prices have a negative general impact on Ukraine's oil and gas industry. Due to low oil prices, the state-owned Ukrnafta has declared a probable halt to production.

"Under such conditions, Ukrnafta's production activities become unprofitable, and the company faces a financial breakdown and production halt," the company stated.

Ukrnafta asked the government for financial assistance in order to survive the oil crisis. However, it later withdrew its request. 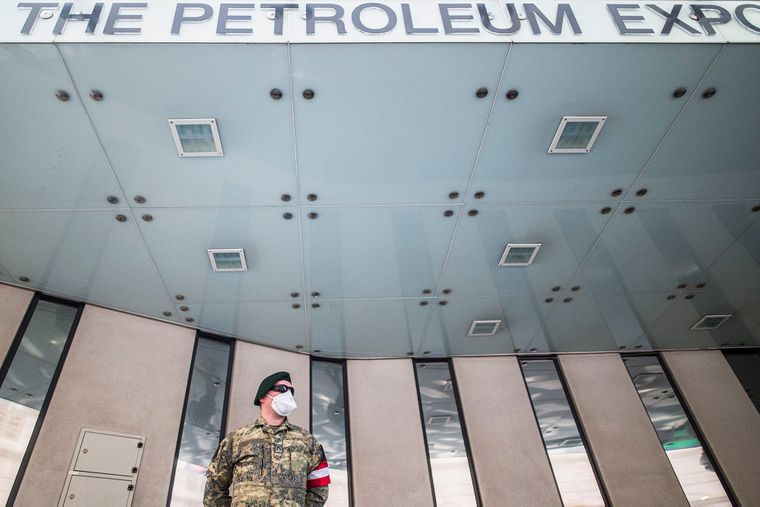 What about gasoline prices and the USD/UAH exchange rate?

The fall in oil prices is already affecting gasoline prices in Ukraine. The reduction in fuel prices is gradual and Ukraine’s Antimonopoly Committee (AMCU) plays a major role in this process. At the end of March, the AMCU held negotiations with the largest gas station chains, where it was agreed that fuel prices need to fall.

At the same time, the cost of gasoline also includes the cost of oil refining, administrative and other expenses, taxes (in the price of one liter of gasoline, according to the NBU, taxes constitute approximately $0.37) as well as the dealer’s margin. Therefore, the fall in gas prices may not be as noticeable as that in oil prices and may take some time. Since the beginning of 2020, a liter of A-95 gasoline has only fallen in price by $0.15.

The fall in oil prices should also help to strengthen the hryvnia, since it means a reduction in the cost of foreign currency spent on imports of oil and petroleum products.

However, the currency exchange rate is now also shaped by psychological factors, in particular the negative expectations of investors about Ukraine's growth, especially in the context of uncertainty about cooperation with the IMF. Therefore, in the short term, oil prices will not have a significant impact on the price of the U.S. dollar in Ukraine.

Unlike Ukraine, falling oil prices automatically lead to the devaluation of the Russian ruble - precisely observed on the morning of April 21. After the collapse in oil prices, the dollar’s exchange rate rose a little over 1 ruble in Russia, and currently costs around 77.55 rubles.

READ MORE: Oil Prices Decline Sends Ruble Tumbling. What Happened on Black Monday and How It Will Affect Ukraine 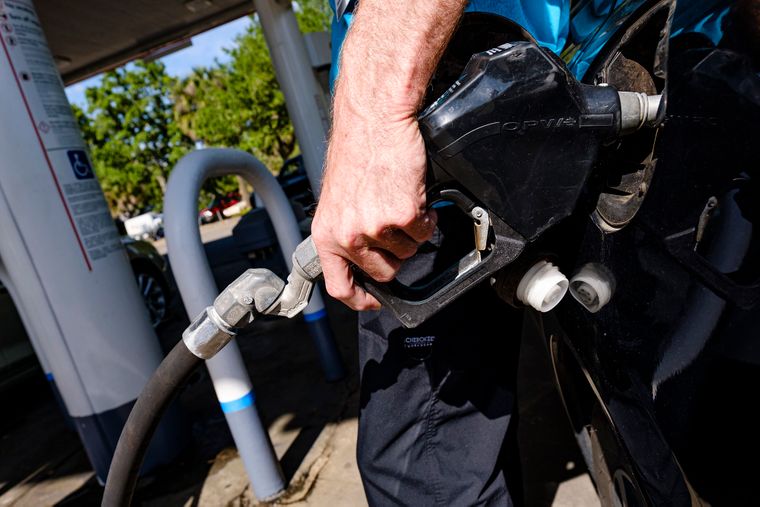 Reduction in gasoline prices in Ukraine may not be as noticeable as in oil prices. Photo: EPA-EFE / DAN ANDERSON

Low world oil prices suggest Ukraine could now stock up cheap oil so that in the future, when prices go back up, the state does not spend more on oil import than it has to.

According to Naftogaz Executive Director Yuriy Vitrenko, Ukraine does have great potential for oil storage. “We have a huge oil transportation system in Ukraine where we can store oil, one working refiner in Kremenchuk with large storage capacities, as well as many refineries. which have been long stopped, but which at least have storage capacities. The oil storage business seems to be the most profitable right now," said Vitrenko.

However, in order to lay in a supply of cheap oil, Ukraine still needs money as prices for actual oil remain positive.

“Even though oil has fallen in price, the state still needs money to buy it, which it does not currently have. Naftogaz, for example, does have funds, but it all depends on the government’s decision,” says Kuyun.

Among others, Naftogaz has about $2.9 billion received from Gazprom at the end of 2019 under so-called gas agreement. However, the fate of this money must be decided by the owner of Naftogaz – the Cabinet of Ministers.

Under the previous government, prior to the coronavirus-induced crisis, there were plans to spend these funds on the construction of roads and hospitals. Now, in an emergency, after the budget deficit increased threefold, and the government is incapable of covering it with loans, purchasing oil with “Gazprom money” does not appear to be at the top of the list.

“Gas War”: Will Ukraine and Russia Agree on Transit?
1450

Re:FORMA: How to Profit Off the ''Green Tariff''