The Park of Eternal Glory is disinfected after flowers were placed there to commemorate May 9, Victory in Europe Day in Kyiv, Ukraine. May 9, 2020. Photo: Viktoria Roshchyna / hromadske

Unlike Belarus, Ukrainian authorities decided to cancel Victory in Europe Day celebrations in Ukraine on May 8 and 9 due to the coronavirus quarantine. Heads of regional government administrations were told to “personally or on a deputy-level” individually thank World War 2 veterans in their regions. Hromadske took a look at how Ukraine commemorated the day of victory over the Nazis in World War 2.

Ukrainian President Volodymyr Zelenskyy on the morning of May 9 managed to place flowers and honor the victims of the war in both the capital, Kyiv, and in the far-western region of Zakarpattya.

In a video address following the commemoration, the President announced a new project to install memorial bells in four regions of Ukraine, including occupied Donetsk and Crimea.

Prosecutor-General Irina Venediktova stirred up controversy with her May 9 Facebook post by adding a video of Russian singer Lev Leshchenko to her congratulatory message. That addition may have been ill thought out – Leshchenko is in the Ministry of Culture’s black books for supporting the immoral annexation of Crimea.

Venediktova did apologize and deleted the video later, saying that “The song is a symbol of victory over fascism. This 1975 son is our history and a reason to be proud of the Great Victory. Leshchenko himself is not that symbol. The [Russian Federation] is an aggressor state. And Crimea is Ukrainian. There’s no need for manipulation...This is a private page, control yourself,” wrote the prosecutor-general in her apology.

How Kyiv Marked the Occasion

Despite the quarantine, there was still a procession at the Park of Eternal Glory in the country’s capital. People laid flowers and wreaths at the memorial to honor victory over Naziism in World War 2. The procession was organized by NGO Public Solidarity and the Kyiv City Veteran’s Organization.

After the flowers were laid, people in hazmat suits disinfected the area.

One person attended the procession wearing a cap with a Soviet Union cockade attached to it. Law enforcement on the scene asked the man to remove the cap and hand it over to them for violating an administrative regulation, as Soviet-era symbols are banned in Ukraine, but the man refused to hand over the cap. Law enforcement confiscated it anyway and fined the man $188.80 for violating the law on authoritarian imagery.

Opposition party For Life, often considered a pro-Russian party and made up of many ex-Party of Regions members, also found a way around the quarantine and organized an auto rally in order to “bring attention to May 9”, according to their press service. Photos posted on that press release show party leaders, including media oligarch Viktor Medvechuk, attending the rally without any protective equipment such as masks. 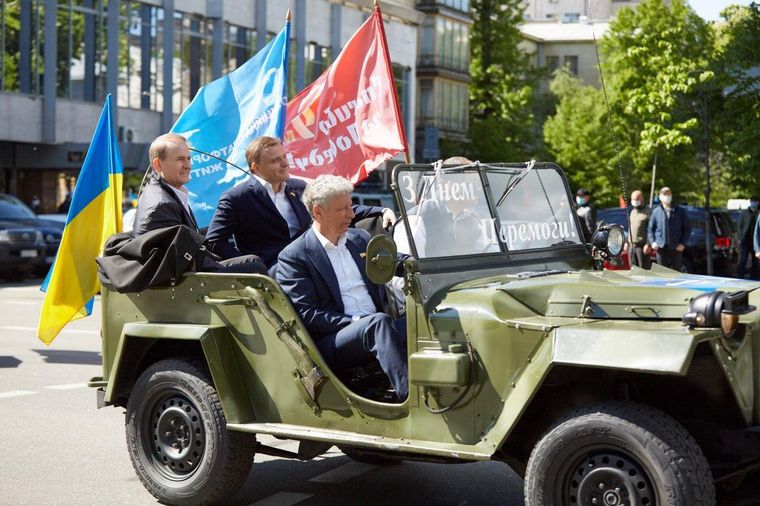 Leaders of the opposition party For Life, Viktor Medvechuk (left), Serhiy Levochkin (center), and Yuriy Boyko (right) at an auto rally in honor of Victory in Europe Day. Kyiv, Ukraine, May 9, 2020. Photo: Opposition Platform – For Life

Kharkiv mayor Gennady Kernes, his deputies, heads of district administrations, faith leaders, as well as MPs of the regional parliament all visited the mass graves and the Motherland Monument in the city. Their procession observed quarantine norms, including masks wearing and social distancing. 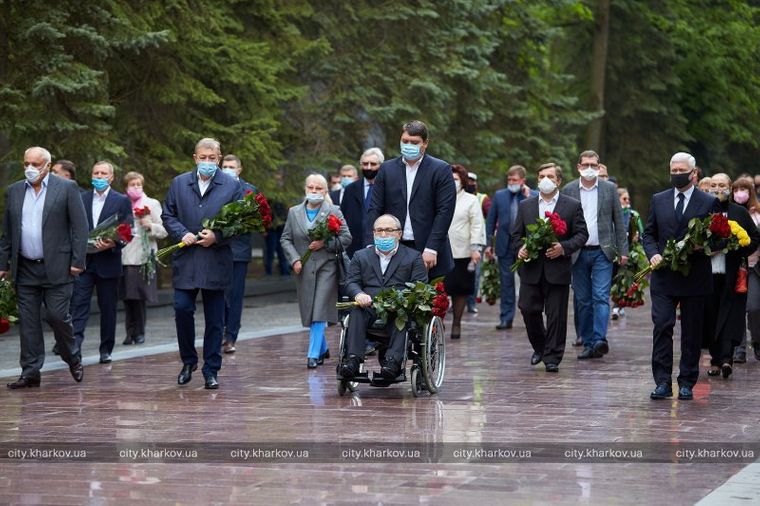 Kharkiv residents also held a nightly commemoration on the night of May called “The First Minute of Peace" in honor of the day, reports Ukrinform. Dozens of activists lit candles at 11:01 p.m. on May 8 in remembrance of the exact minute in 1945 after the signing of Nazi capitulation to the Allies, ending the Second World War in Europe. Activists then observed a minute of silence.

World War 2 as a whole would not end until September 2, when Imperial Japan surrendered following the nuclear bombings of the Japanese cities of Hiroshima and Nagasaki by the United States.

An Auto Rally In Odesa

Opposition party For Life also held an auto rally in the city of Odesa, reports Radio Free Europe / Radio Liberty. According to MP Mykola Skorik who took part in the auto rally, all participants remained in their cars and thus the rally was not a violation of quarantine norms.

But their rally, held at the seaport in the city, was interrupted by law enforcement and activists nonetheless. After over an hour of negotiations, law enforcement decided to allow one car every 5-10 minutes into the seaport, though the cars were made to remove any party-affiliated flags.

Odesa residents also brought flowers to the Monument of the Unknown Sailor. Law enforcement allowed all willing to do so, but did run them through a metal detector first. Not all participants had masks, according to press outlet Dumska, but the outlet noted that police handed out free masks to all who asked.

At a commemoration held at the Dnipro city council, the slogan ‘1939-1945 Never Again’ was laser projected onto the face of the building, while every window of the building was lit up with candles. Over 600 names of World War 2 veterans were also displayed on the building.

In the southeastern Ukrainian city of Zaporizhia, members of the “Victory Regiment” movement held an auto rally in honor of the day, though they had affixed Soviet symbols to their cars. This enraged some local activists, who took it on themselves to tear off the symbols, and police opened criminal cases on charges of “spreading Communist symbols” against the movement, reports Interfax-Ukraine.