President Volodymyr Zelenskyy has offered the post of Deputy Prime Minister for Reforms to Georgia's ex-president and former Odesa region leader Mikheil Saakashvili. Saakashvili himself called it "a great honor." We looked into what is behind the second coming of Mikho to the big Ukrainian politics and how he can fit into the new government.

It was then that Saakashvili headed the Odesa region, but within a year and a half he fell out with almost all of Ukraine’s leadership, and his criticism of Poroshenko ended with his resignation. Saakashvili himself called his former comrade a "baryga" (‘profiteer’).

The high-profile confrontation with President Poroshenko ended with Mikho's deportation from Ukraine. When Zelenskyy readmitted him to citizenship, he explained that he was merely “correcting an illegal decision” and that there were no political benefits. Even before that, Saakashvili himself began to openly support Zelenskyy.

Upon returning to Ukraine, he declared no political ambition, but quickly changed his mind. Through the court he achieved registration of his Movement of New Forces party in the parliamentary elections, and before that he had to refuse Kyiv Mayor Vitaliy Klychko’s offer to head the list of the UDAR party.

But before the election, Saakashvili changed his mind again. He urged his supporters not to vote for the Movement of New Forces, but to support the Servant of the People because "every percent is important." In this way, he ostentatiously gave way to the "fresh faces".

After the victory of the presidential party in the elections and the formation of Oleksiy Honcharuk's government, talks about Saakashvili's involvement in the ruling team subsided.

The former Georgian president moved into a new apartment in Odesa and continued to act in public as a politician – commenting on major events in domestic and foreign politics (not forgetting Georgia), going on television and generally reminding everyone that he is a reform expert.

If you open Saakashvili's Facebook page, you will immediately see a video of the renovated Odesa-Reni highway, and the caption will remind you that this is a "Saakashvili team infrastructure project". And the last video on his page is titled "Answer to the question: what did Saakashvili achieve in Odesa?"

Why does Zelenskyy need Saakashvili?

"Staff shortage is pressing," political scientist Vladimir Fesenko explains to hromadske. And Zelenskyy himself actually admits this when he states that he is looking for effective performers.

"A very powerful figure: the experience and history of successful reforms in Georgia, powerful energy, political experience, international relations. But the most important thing for Zelenskyy is successful experience and energy," Fesenko calls out the virtues of the potential deputy prime minister.

Political technologist Sergii Gaidai agrees with the idea of ​​a "staff shortage", calling it more extreme – a "managerial crisis".

The year 2020 began for Ukraine with political perturbations, when Denys Shmyhal and a number of new ministers came to replace Honcharuk's young government.

Political scientists agree that the formation of a new government can best be characterized by two concepts – chaos and staffing bottlenecks. The ministries were divided, then not, the ministers allegedly stayed, then left. As a result, the new government, which should primarily address economic problems, was formed without the ministers of economy, finance and energy. A number of candidates have simply turned down their posts.

The change in government demonstrates that Zelenskyy decided to abandon his policy of "fresh faces only" and began looking for people with experience, Fesenko says.

"He considered different options. Some did not suit him, some refused. Saakashvili was far from the first on this list. There is an obvious need for a new strong impetus – earlier for reforms, now for crisis management,” the political scientist notes. 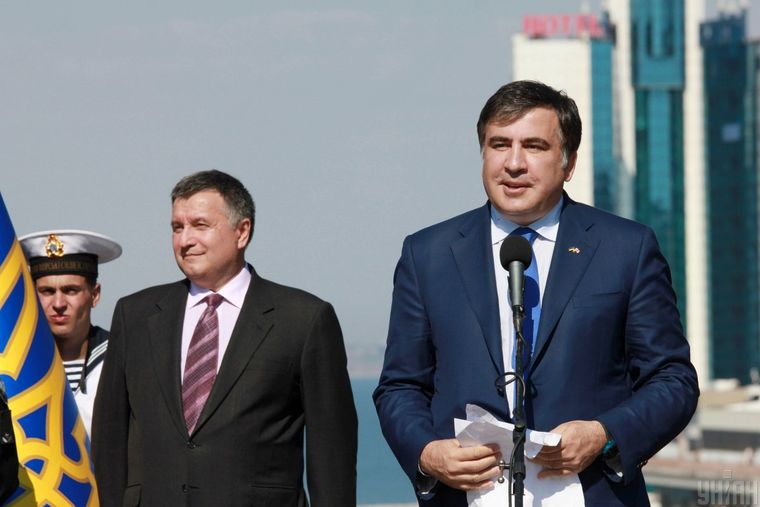 Risks from the “walking conflict” for those in power

Everyone and their brother has had their say about the risks of Saakashvili's appointment because the man has a history of creating major conflict. Moreover, it is likely that in the future the deputy prime minister's seat might become too small for him.

Fesenko says that not all members of the presidential team support Saakashvili's appointment. They fear a repeat of Poroshenko's situation when an ally turned into a bitter critic of the president.

The most obvious ground for the conflict is Interior Minister Arsen Avakov, with whom Saakashvili previously had a high-profile altercation.

We should not expect a war between them from the word go, says a political scientist, although in the future there are all the reasons for conflict – Avakov will defend his influence and Saakashvili will also seek influence in the Shmyhal government.

As for Shmyhal himself, he is unlikely to approve of the appointment of such a powerful figure as deputy prime minister.

"Every prime minister wants to maintain his influence, status, he will protect his territory. Excuse my comparison, but this is an alpha-male competition. Shmyhal will not come into direct conflict, but I think he will be insidiously protecting his territory,” predicts Fesenko.

“He is intolerant of corruption, intolerant of the absence, shall we say, of his outlook as such. It means inevitable conflict with at least the government and Zelenskyy's entourage,” says the political technologist.

According to Gaidai, the possibility of appointing Saakashvili as prime minister will emerge if Zelenskyy sides with him in a future conflict.

Thus we are yet to see whether Saakashvili will fit into the team in power and where he will direct his almost endless energy – into the constructive line of reform in Ukraine or to the destruction of his opponents.

Will the Rada support Saakashvili’s appointment?

In spite of all the above, both Fesenko and Gaidai concede that the legislature will refuse to appoint Saakashvili as deputy prime minister. Gaidai even considers this probability quite high. The reason being that for various reasons, not all “servants” are ready to vote for this appointment.

Gaidai also claims that experts, "pressure groups", including Western partners, have hinted at the need to involve Saakashvili, who has successful management experience.

“I’m not sure if this is not a slick policy of Zelenskyy. If he really wanted Saakashvili to become a member of the team, he would at least be actively persuading every MP today. But Zelenskyy left everything as it is. It can be a sly move: you see, I really wanted to, but it didn't work out,” the political technologist argues.

At the same time, Saakashvili himself, after meeting with the Servant of the People's faction on April 24, confidently declared that he was ready to start working.

Immediately after the meeting in a comment to hromadske, he elaborated: "after my approval, I am ready to submit a whole package of additional laws to make life easier for small and medium-sized businesses. To remove the bureaucracy and parasites that are simply cutting off Ukrainian business.”

According to the former Odesa region governor, it was the president's instruction and desire that he also negotiates with the International Monetary Fund.

“Ukraine needs far more money than [the IMF] offer. First, we have to get this money and then spend it properly to help people and stimulate the economy and business,” he stressed.

Discussion: The Ukrainian Authorities Take On Anti-Corruption and Saakashvili