Russia Is Pushing Ukraine out of the Seas. What Help Can Kyiv Count On?
4110

A Hello to Arms: Is There a Black Market for Guns in Ukraine?
6666

Ukrainian President Volodymyr Zelenskyy started setting his foreign policy agenda by embarking on his first foreign visit to Brussels where he met Jens Stoltenberg, the Secretary-General of the North Atlantic Treaty Organization. After their meeting, Stoltenberg and Zelenskyy held a press conference, in which Zelenskyy reaffirmed Ukraine’s commitment to NATO and to reforms that would bring the country closer to membership in the alliance.

Hromadske takes a look at the main points following their June 4 meeting.

At the beginning of his remarks, Zelenskyy reiterated that the strategic priority for Ukraine to become a full-fledged member of NATO and the E.U. remains unchanged.

“This [integration into NATO and the E.U.] remains a priority of our foreign policy. Ukraine’s progress towards high European living and security standards is the demand of Ukraine’s society.”

Zelenskyy also noted that the goals of his presidency are to improve Ukrainians’ living standards, root out corruption and modernize the state.

READ MORE: How Realistic Are Ukraine’s Chances of NATO Membership?

The president emphasized that achieving better living conditions and rooting out corruption is only possible by ensuring Ukraine’s national security.

To achieve that, Zelenskyy said he was, “ready to negotiate with Russia, ready to implement Minsk agreements (also known as “Minsk II”, agreements signed in 2015 by Ukraine, Russia, France and Germany to ensure peaceful path towards ending the conflict in Donbas, - ed.).”

“However, we first must learn to protect ourselves and to become stronger,” Zelenskyy noted.

He emphasized that Russia’s aggression remains the main threat for the Euro-Atlantic security, noting that the common effort of NATO and Ukraine is to ensure stability in the Black Sea region, “which requires additional efforts”.

Another significant outtake of the press conference, was Zelenskyy’s commitment to implement a reform on the law on National Security.

According to Zelenskyy, the implementation of the law is one of the main measures to strengthen Ukraine’s security and bring the country “closer to NATO standards,” one of his main priorities. He explained that it contains reforms of the security service, intelligence agencies, defense industry and democratic civilian control over security and defense sector.

“Ukraine, which is stable, democratic and capable to defend itself is an integral part of the European security… I hope that in the long-run we will be able to transform our partnership into a full-fledged alliance,” Zelenskyy noted at the end of his statement. 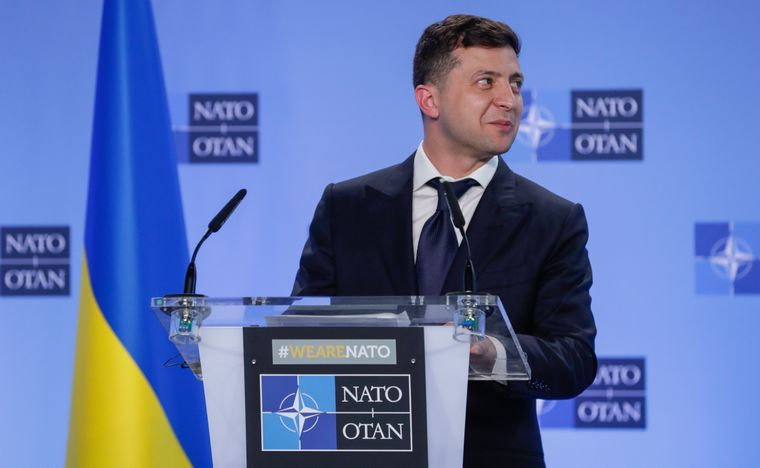 Jens Stoltenberg, NATO’s Secretary-General emphasized the position of Ukraine as an especially valuable partner of NATO and expressed his appreciation for the contribution of Ukraine to the NATO missions in Afghanistan and Kosovo.

Stoltenberg has also noted that the Ukrainian presidential elections demonstrated the country’s power of democracy.

Pleasure to welcome @ZelenskyyUa to #NATO HQ for the first time. We stand firm in our support for Ukraine’s sovereignty & territorial integrity & will continue to provide strong practical support. The people of Ukraine deserve peace. pic.twitter.com/35Dsy7dNAu

Stoltenberg announced that a meeting of the NATO-Ukraine commission was held on June 4, in which the security assessment of the situation in Ukraine was carried out, in particular - Russia’s decision to grant its passports to the residents in the occupied territories of Donbas. He said this was another example of Russia trying to destabilize Eastern Ukraine.

NATO’s Secretary-General once again expressed his support for Ukraine’s sovereignty and territorial integrity. He said NATO countries will never recognize the annexation of Crimea, condemned Russia’s aggressive actions in the Black Sea, and added that Russia must release the captured Ukrainian sailors.

According to Stoltenberg, NATO will continue to provide technical assistance to Ukraine and to its armed forces. He urged Ukraine to implement the law of National Security.

Stoltenberg has noted that NATO’s eastward expansion has significantly increased the security and stability in the region, therefore Ukraine should be able to join the alliance once it has implemented all of the requirements.

He also said reforms in Ukraine are needed to achieve it.

“Every day, our NATO advisors support Ukraine’s security and defense reforms. Mr. President [Zelenskyy], you have a strong mandate to implement key reforms, to fight corruption and strengthen the rule of law. These reforms are essential to ensure security and prosperity for all Ukrainians and to bring Ukraine closer to NATO.”

The Sunday Show: How Did the New Government Look?