Will Ukraine Get Its Own Unified Orthodox Church?
31706

In Ukraine, folk songs and carols were passed down through generations, and craftsmen who made musical instruments shared the secrets of their craft with grandchildren and great-grandchildren. After the collapse of the USSR, there was a surge in the popularity of folk motifs in music in Ukraine, but it was a short-lived one.

It was only in 2014, after the Revolution of Dignity, that interest in folk began to recover. The younger generation of musicians is trying to preserve and recreate the heritage, despite very few carriers left. These are stories of people in Ukraine who preserve folklore and pass it on to their descendants.

Mykhailo Tafiychuk is 82 years old, and his whole life is closely connected with music - he is a craftsman of musical instruments. Mykhailo's works are known both in Ukraine and abroad. He made instruments for world-famous Ukrainian performers, such as KAZKA and Ruslana. And the trembita (a wooden alpine horn) created by him - at 9 meters 22 centimeters - is considered to be the longest in the world.

Tafiychuk lives in the village of Bukovets in the western Ivano-Frankivsk region. It was here that he first heard the sound of a sopilka (a Ukrainian pipe, similar to fife), and at the age of 6 he made it himself - and since then he has been making instruments. Prior to him, there were no craftsmen in Mykhailo's family - his father worked as a blacksmith, and his mother was a housewife and played the drymba (a type of drum).

"Nobody taught me, nobody helped me. I saw people playing sopilka in the village, and I wanted to follow suit. I asked my mother to buy me a sopilka. She bought me one, but it didn't sound as I imagined. Then I took elderberry, gouged out the core and made a similar instrument," says Mykhailo. 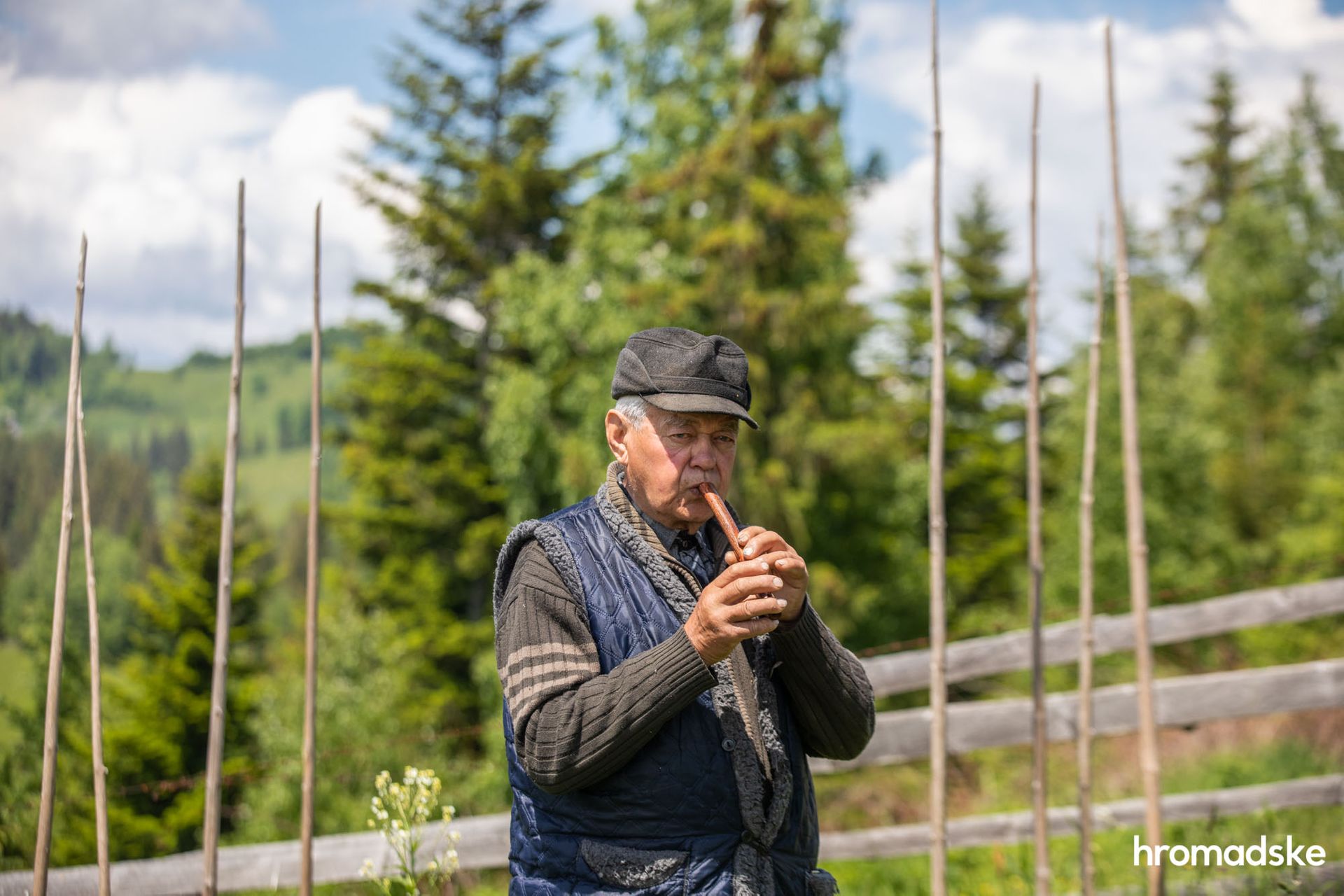 Craftsman of folk instruments Mykhailo Tafiychuk plays a homemade sopilka in the yard of his house in the village of Bukovets, Ivano-Frankivsk region. Photo: Oleksandr Khomenko / hromadske

At the age of 14, Tafiychuk went to work as an assistant blacksmith. His parents had separated by then, so Mykhailo had to work to help the family. He himself says that there were two passions in his life: instruments and blacksmithing.

"They wanted to send me to Ivano-Frankivsk to a music school, but I didn't want to - because of blacksmithing. I realized that I would not be able to practice it there. And I like to do everything by hand," says Tafiychuk.

Mykhailo's workshop feels tiny. It has a low ceiling and dim light. There are many different blanks for future instruments. The room smells of wood. Here, when he was just 24, the man created his first cymbals, and a year later - a duda (a type of pipe, similar to bagpipes).

But from the age of 12 Tafiychuk dreamed of lyres. Then he saw for the first time a man playing it near the church. The future craftsman fell in love with the sound so much that he also wanted to learn to play the instrument. It took the boy half a century to make a dream come true and make his own lyre. 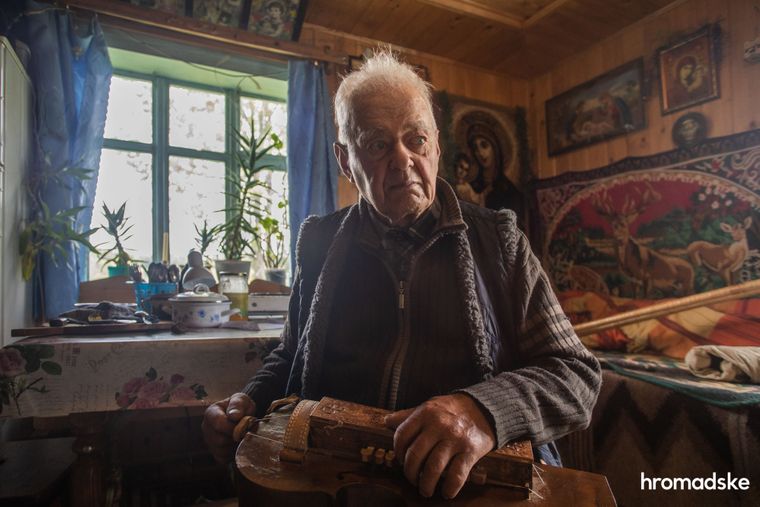 Craftsman of folk instruments Mykhailo Tafiychuk plays the lyre in his house in the village of Bukovets, Ivano-Frankivsk region. Photo: Oleksandr Khomenko / hromadske

"This instrument is complex and very time-consuming. And I never had the time," he explains. "I don't know where I got it from, because there were no musicians in the family. I was drawn to instruments. I would see one - and make an identical one. Once someone brought a clarinet for repairs. I measured it, fixed it and gave it away, and then proceeded to make the same for myself. Only then did I learn to play it. And taught my sons," adds Mykhailo.

The secrets of making folk instruments were passed down through generations. In addition to blacksmithing, instruments also helped Tafiychuk earn a living, but according to the craftsman, he did not ask for much money for his work.

"I make an instrument, a person comes for it, and I'm happy: they like it! So people need me. I know one craftsman in Lviv charges $730 for a lyre. My price is $182-255. Conscience prevents me from taking more," he elaborates. 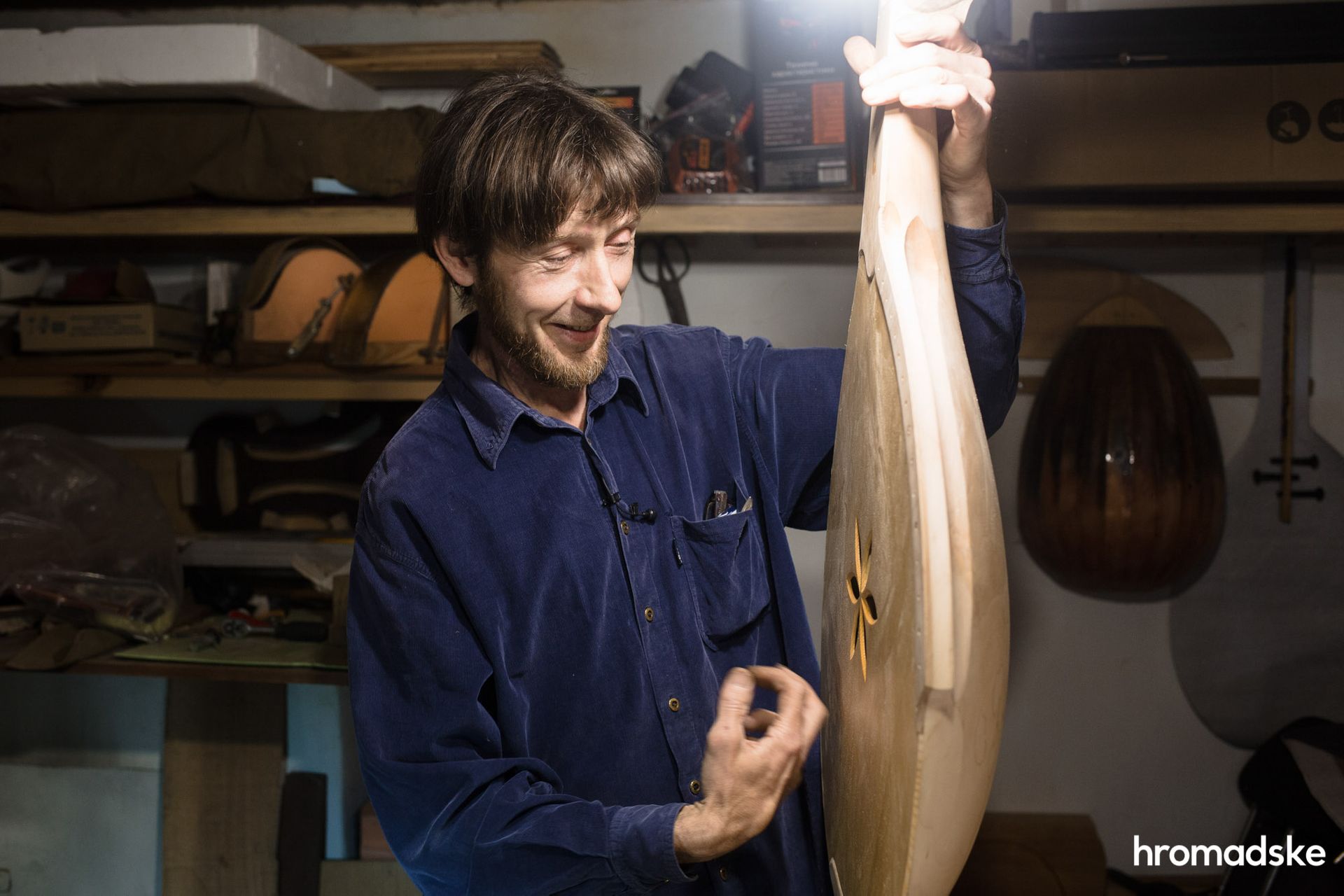 Taras Kozub, a craftsman of instruments and a teacher at the Stritivskyi College of Kobzar Art, shows the body of a bandura he makes. Photo: Anastasia Vlasova / hromadske

Ukrainian kobza: the path to revival

Taras Kozub, a teacher at the Stritivskyi College of Kobzar Art and a craftsman of instruments, says that today there are only one or two craftsmen in each region of Ukraine who can make folk instruments. That's not enough.

“There used to be a bandura factory, but now you can only order this instrument from a craftsman or buy it through OLX (online marketplace). The problem is that in Ukraine this doesn’t bother anyone at the state level. Nobody needs music factories," explains Kozub.

The first instrument that Taras made himself was a guitar. But when he came across old-fashioned (folk) instruments, he decided to learn to make them.

"I was asked to fix the overlay on a kobza, and I had never heard of them before. It was tuned, I just held on to the strings - and I was touched. That's how I started working with such instruments," the craftsman smiles.

At the Stritivskyi College of Kobzar Art, Kozub shows students how to make instruments. According to him, specialized educational institutions could help transfer and preserve cultural heritage. However, the only college of kobzar art in Ukraine is currently on the verge of closure - there is a lack of people willing to enter.

College graduates - the band "Shpyliasti Kobzari" - are trying to draw attention to this problem. During performances on the Ukrainian version of the vocal TV show "The Voice", they talked about the state of the college and stressed the need to promote folklore.

However, according to master Mykhailo Tafiychuk, young people are not very interested in preserving cultural heritage, especially the making of folk instruments.

"I taught my sons to play and make instruments, they know the business. But the grandchildren - and I have 16 of them - are no longer interested. None of them wants to master this craft. And if a person does not want - you can’t force them. You must be keen on music," explains the craftsman. 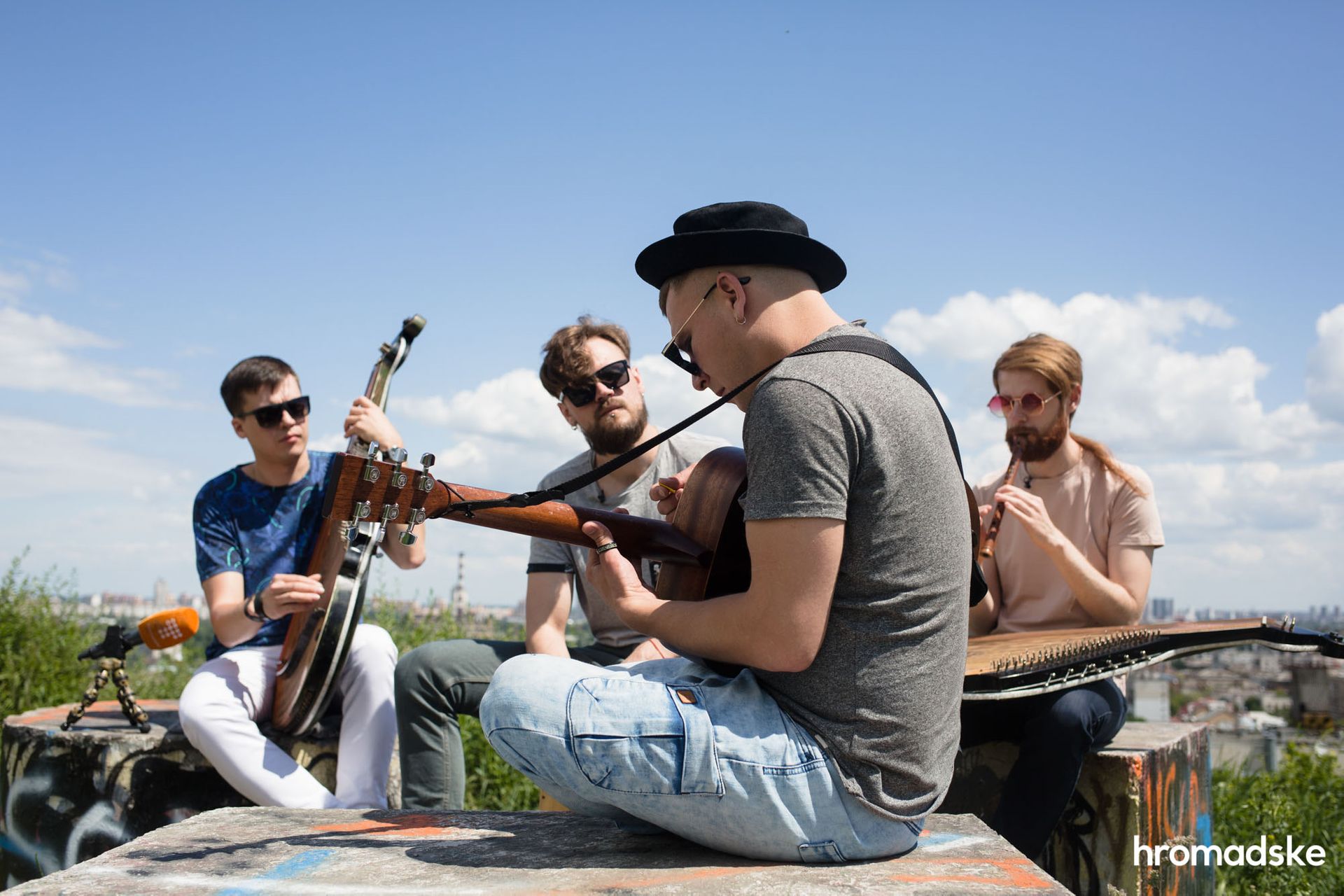 However, after the Revolution of Dignity in 2014, interest in folklore (as well as in its roots in general) increased. The younger generation of musicians is much more likely to use folk motifs in their work.

"The purpose of our band is to show the diversity and capabilities of the bandura. In our repertoire, there are ethnic songs, popular, little-known ones. On the bandura we can play jazz, sing "My Thoughts" by Taras Shevchenko, and make an electronic mix with a DJ," says the founder of the band Yaroslav Dzhus.

The main band consists of four musicians who play different instruments: guitar, sopilka, cajon and bandura. According to Yaroslav, it was the college that instilled in them a love for the bandura and an understanding of how important it is to preserve Ukrainian traditions.

"When I entered college, I was still Russian-speaking, knew little about Ukrainian culture and never even held a bandura. My parents were design engineers at the Arsenal plant, but they had a natural ability for music. My grandmother could pick up a melody on the piano by ear, my mother sang. I also played the piano as a child, but I saw the bandura only when I entered college," says Yaroslav.

Earlier, according to the musician, most people had a misconception about the bandura. This was perhaps most influenced by the USSR.

"People thought that a bandura was when three musicians sang merry songs. The repertoire once even included compositions about Stalin and Lenin. Although in fact, we have a huge layer of folklore - more than 200,000 folk songs have survived," says Yaroslav. “This is an invaluable treasure. You can take unique folk songs, process and mix. Now this trend is spreading."

And he adds: "People who listen to us, then become interested in the bandura, immerse themselves in the environment and go to learn to play this instrument." 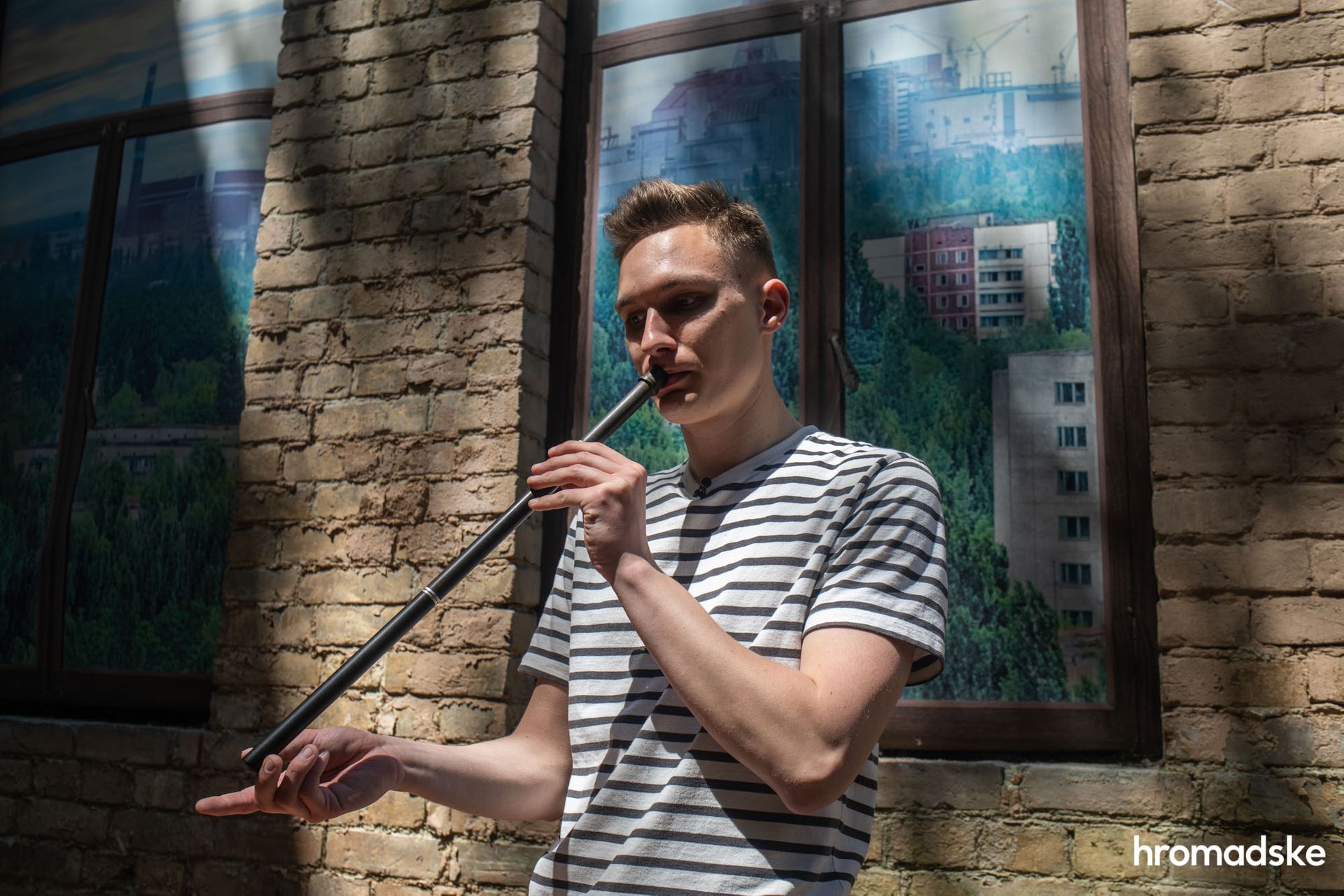 "Ukrainian song is what I want to show the world"

According to Volodymyr Vikarchuk, a member of the “Shpyliasti Kobzari”, there is a widespread belief in Ukraine that ours is not of such high quality, people do not feel pride and value of it.

"People start to respect their own when it becomes popular abroad," says Yaroslav Dzhus.

A striking recent example is the band Go_A. They took 5th place at "Eurovision-2021" with the interpretation of the Ukrainian folk song "Shum". After the competition, it topped the world charts and garnered millions of views on YouTube.

"I feel proud of what I do," says Go_A band member Ihor Didenchuk. “Ukrainian song and culture is what I want to show to the whole world, because these traditions are gradually disappearing. But if you don't know your roots, you won't have a normal future."

Ihor has been playing the sopilka since he was 6 years old. He once heard a classmate play, and wanted to learn too and signed up for classes. 16 years have passed since then.

"My story with folklore began when I entered a university in Kyiv and joined a folk ensemble. I wanted to play the sopilka, but I was told that I would mostly sing. When I heard this, I thought, ‘Where have I found myself?’ Everything was new, unusual and didn't seem very interesting,” says Ihor.

He adds: “Then I got involved, I liked it. When I sing these songs in a band, every one strikes to the marrow, I get this tingling sensation. You feel every word and every century they have gone through.”

Now it is important for him to acquaint the world with Ukrainian culture in any way possible.

Mykhailo Tafiychuk also hopes that eventually his grandchildren or great-grandchildren will become interested in music and instruments. In the meantime, he continues to partake in the craft himself.

"Now I refuse many, I do not take on work. I don’t have the energy. But if I still want to make an instrument - I'll give it a go. Man teaches himself. And practice makes perfect," says the craftsman.

Friends in Need: Muslims and Jews in Crimea | Beyond East and West
1812