“I’m the Change”: What It’s Like to Be Feminist in Moldova, Armenia, Ukraine, and Russia
26938

Volodymyr and Hanna show around the front-line village of Novooleksandrivka, which is home to just 10 inhabitants Max Levin / hromadske

Novooleksandrivka may be the worst place to live in Ukraine. There is no gas, no electricity, no access road. The roads are so bad that even the military cannot get to the village in adverse weather. Despite all this, there are still 10 people living in Novooleksandrivka. Inadvertently, one gets a feeling of traveling 100 years back with a time machine.

"It is impossible to get there now. If you want - you can walk. I will provide you a person to accompany you," said the military man, who is authorized to decide whether to let us into the village. We spent a month authorizing this trip with the locals and the military. Up until the last minute we weren’t sure if we would actually get there in the end.

"Just let them go, they will turn around in 300 meters and head back," the same soldier tells someone rather confidently.

We go to the market in Popasna to buy shoes that will give us a chance to overcome the dirt barrier. For 300 hryvnias ($11) I buy rubber boots, four sizes too small, so that I don't actually lose them in the mud. 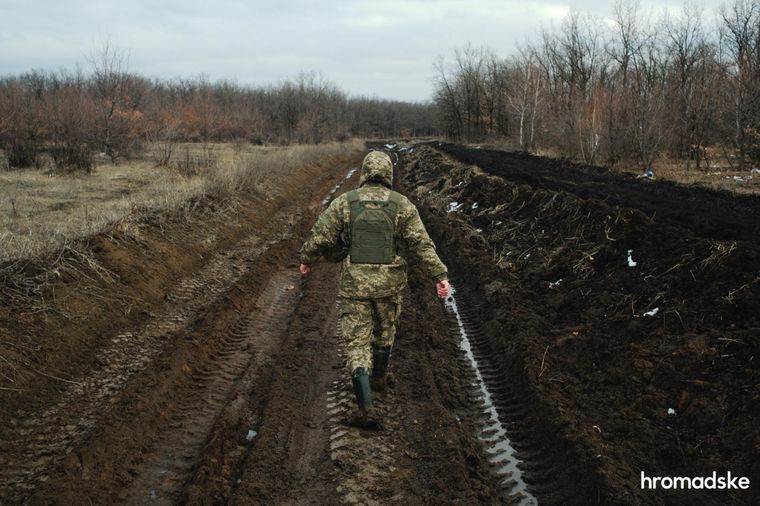 The military shows a way to the village of Novooleksandrivka by the dirt road unsuitable for normal vehicles. Photo credit: Max Levin / hromadske

It takes us an hour and a half to walk two and a half kilometers of the dirt road.

In fact, it was the military that turned it into a road by driving through the woods and fields. But since this ground is mostly used by heavy military equipment, it is impossible to drive on it, for example, by car, even in the warm season. And after the winter, when the snow has melted, but the water has not yet dried, almost every step feet get stuck in the swamp up to the ankle.

When I finally see a local, I almost can’t hold back from hugging him. 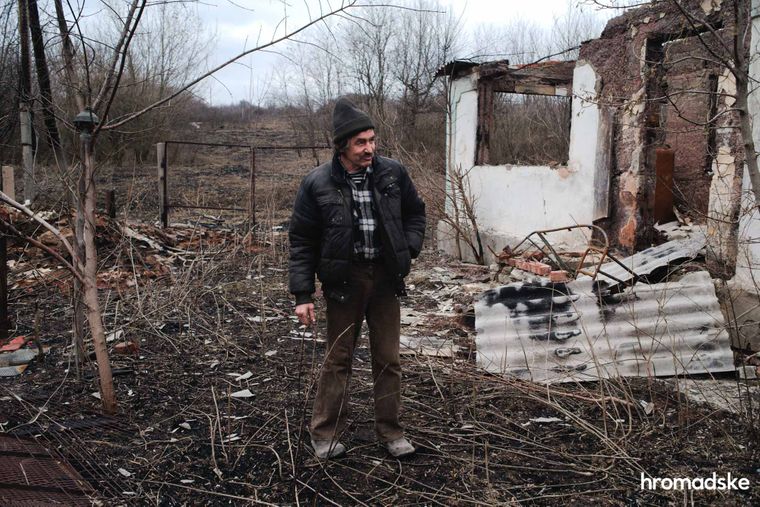 Volodymyr is one of ten residents of the village of Novooleksandrivka. Photo credit: Max Levin / hromadske

"Good afternoon! We got to you here on foot,"  I tell him as if asking for sympathy.

"I thought you wouldn’t be allowed to come!" the resident is outraged, as if he had just lost a bet.

"How [on earth did they let you through]?! he wonders.

The last argument convinces the dog to retreat, she growls plaintively and hides in the kennel. 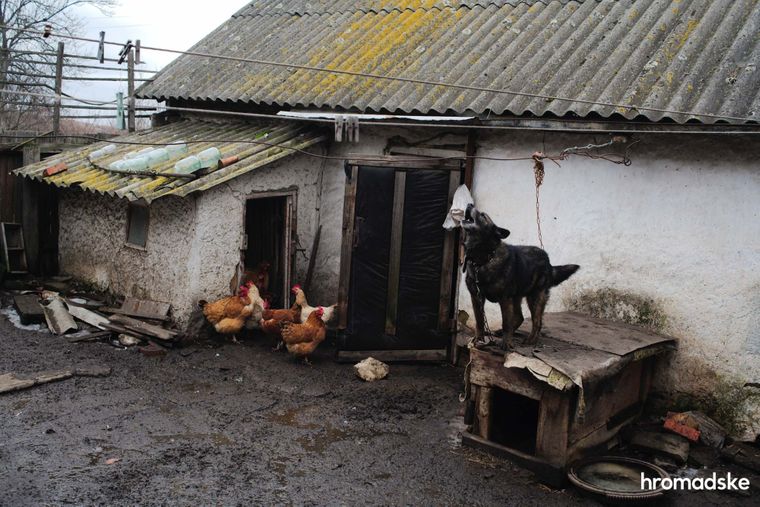 "Check out this beauty! People once lived here. The war drove them out," Volodymyr gives us a tour of the village. He walks between conventional houses, like a character from "Dogville".

"There were barns here. Residential house. The kitchen was here. Nothing [now]!"

"Nothing" is the result of a large fire that broke out in Novooleksandrivka on September 1, 2020.

"We celebrated Svitlana’s birthday today," the man suddenly admits - he is clearly inebriated. "She is 13 years old! Well, 5 plus 8 makes what?! Baker’s dozen! And I’m 11. She is older than me! "

In the traditional system of chronology, Volodymyr is 65. 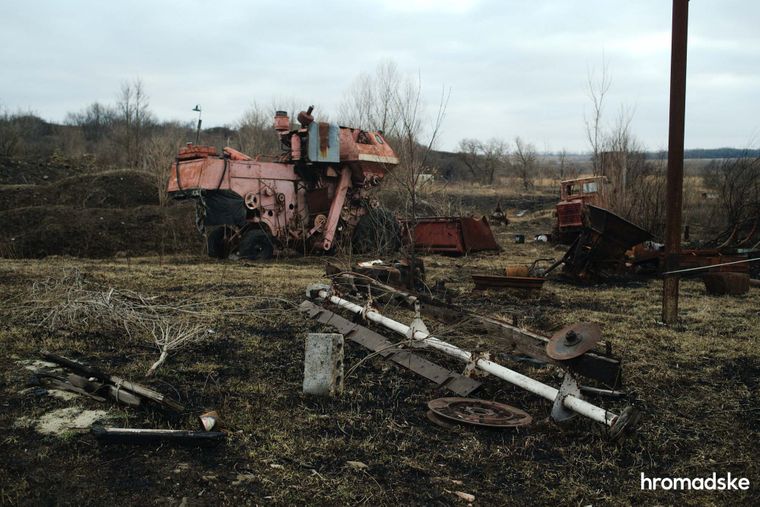 Without light, roads and prospects on the border with “Europe”

He points to the trail and says that it leads to Europe, and after a dramatic pause clarifies: "Well, we call the town of Popasna ‘Europe’!"

"If you go to Popasna from the Pervomaisk highway, the last three letters are missing there. From ‘Popasna’ only ‘Popa’ (butt - ed.) remains," the man laughs, but a second later turns gloomy. "Ukraine is making strides toward Europe, while I'm deep in this s**t! Without electricity, without anything. Live as you please!”

Calling the territory controlled by Ukraine "Europe" is a popular joke among the inhabitants of the occupied territories. But Novooleksandrivka was never occupied. In 2014-2018, it was in the "gray zone" - that is, between the positions of the Ukrainian army and militants. In 2018, the Armed Forces of Ukraine took control of the village.

However, Novooleksandrivka is still in isolation - there is no more or less normal road leading to it. No transport comes here, no food truck. Since 2014, there has been no electricity in the village.

Restrictions on entry also exist in some other frontline villages and towns. For example, in Bolotene, Syze, Pishchane, Staryi Aidar, Katerynivka, Zolote-4, Krymske, Opytne. At the same time, the severity of restrictions in different periods varies and depends on the position of the brigade command, which is responsible for this area.

The situation with a completely missing road is also not unique. In adverse weather, it is impossible to drive to Krymske, Lobacheve, Lopaskyne. 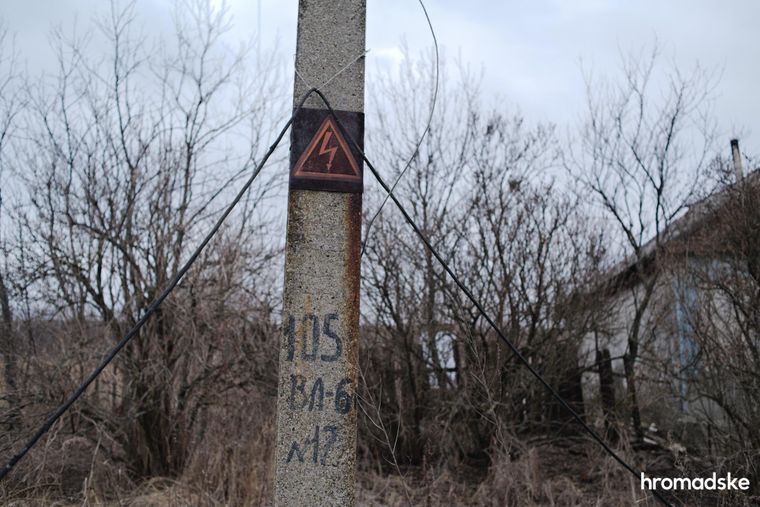 But the long-term lack of electricity supply is extremely rare. In addition to Novooleksandrivka, the same problem exists in Opytne in the Donetsk region. More than 30 people live there without electricity.

Novooleksandrivka's problems are being solved at a very slow pace. Even the question of its administrative subordination to the village council, which is located in the government-controlled territory, was adopted almost two years after the Ukrainian military took control of the village. At the same time, officials promised to resolve the issue of energy supply. They still promise to this day.

"If we are guaranteed that a ceasefire is enforced to restore energy supply, we will get everything done. But so far we have not been given such a guarantee, unfortunately," said the head of the Luhansk Regional State Administration Serhiy Haidai.

The only problem is that it will not be possible to restore Novooleksandrivka's energy supply - the village got electricity from the occupied Pervomaisk. A new line must be laid, but this issue is not on the table. 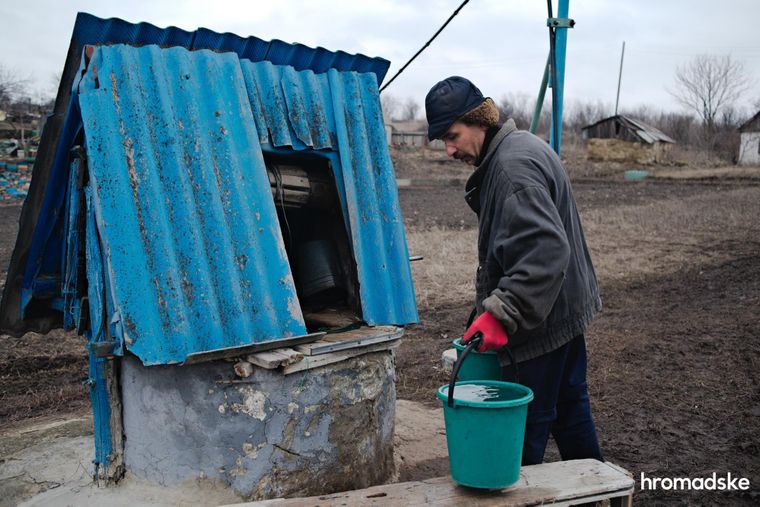 Waiting for the Red Cross

"We can pay Mykola a visit. But [do expect some foul language]," Volodymyr warns us.

57-year-old Mykola lives up to our expectations.

He says the Red Cross bought solar panels and diesel generators for locals. The former is just enough to charge the phone. And for the work of the latter fuel is needed, which must not only be bought, but also brought in a canister from Popasna. 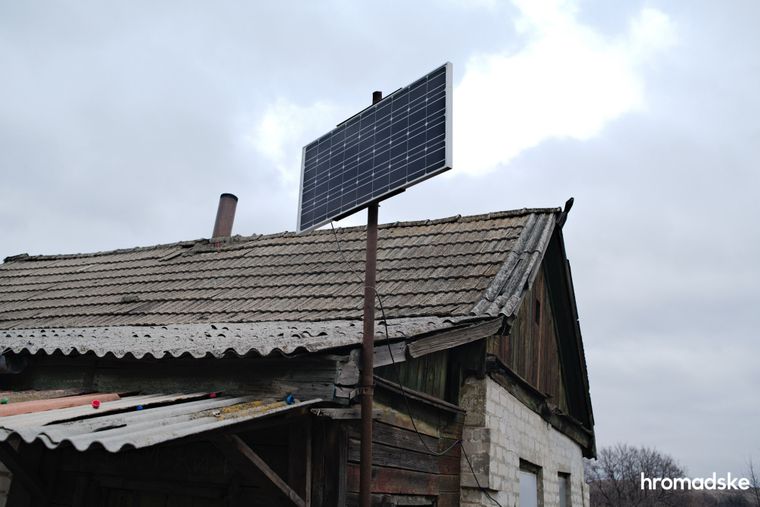 One of the solar panels purchased for the locals by the Red Cross. Photo credit: Max Levin / hromadske

"We try to help them, but our help there is limited, because it is impossible to carry out economic activities there, taking into account safety rules," said Oleksandr Vlasenko, a spokesman for the International Committee of the Red Cross in Ukraine. “It is impossible to stimulate local entrepreneurship, to encourage people to plow the land, because it puts them in danger. So we can’t go beyond transferring financial aid to their cards on a monthly basis [each resident separately]. Also in early December, we brought fuel that people could use to heat their homes during the cold season."

The Red Cross is mentioned by all locals. Unlike local or central authorities, whose existence seems to have long been forgotten.

At the same time, the Ukrainian military is criticized by the locals for not allowing the Red Cross to enter the village.

"We are quite happy about our interaction with the military, we do not have any bans from them, except for those related to security and in force for one or two days. There are no restrictions on the work we can do in this village. It is only the weather conditions that limit us," Vlasenko assures. 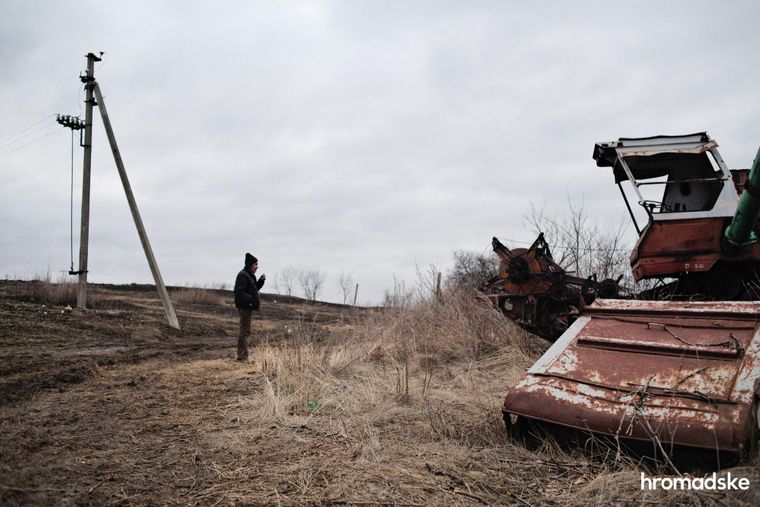 Why do they stay?

Before the war, more than 100 people lived in Novooleksandrivka. Now there are only 10 left.

"I will not leave the village! Who will take care of it?! Who will repair it?! I am a builder myself. Now and then I repair the roof, I mend broken windows. Recently there was shelling - I repaired it!" Volodymyr defends his right to live in his place of birth in a rather touching manner.

But another reason is mentioned a bit later:

"I will not leave my home so it is not looted. In all honesty. I once went to "Europe" for bread, and I was robbed!"

His main sources of income are help from the Red Cross and money from selling eggs to fellow villagers. The 65-year-old man does not receive a pension.

"My employment record book got soaked. I took the confirmation, but there was an “LPR” seal - which was not recognized. I am missing 13 years of work [to be eligible]," Volodymyr spreads his hands.

He has three daughters, grandchildren. "I have deep pockets," he describes himself. But he hasn't seen his daughters or grandchildren for a long time - he just doesn't have the money to go somewhere. They do not come, because "they heard there was shelling in 2014, so that's out of the question!" 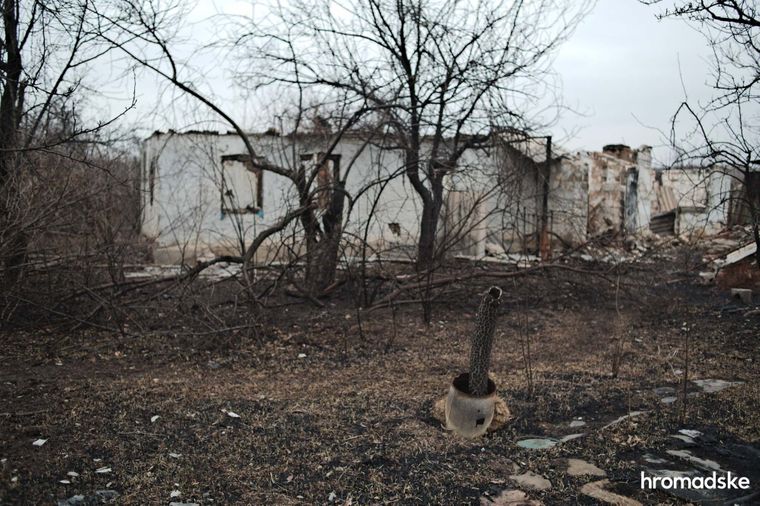 Mykola has a similar story: his daughter lives in Kyiv and his son is in Batumi, Georgia. He himself is not going to leave.

"You’re far from being the first one to ask me why I’m not leaving," the man says resentfully. “But the question is f**king rhetorical. Will you give me your home, will you exchange it with me? How much can I sell my home here for? Zilch. And the apartment on the other side - 0.1. I don't want to go begging."

"I was born here, I built a house to live well in retirement. So that my children and grandchildren could come here. I'm not complaining about anything, I have everything. Just let me live!" he adds.

When we approach the yard of 72-year-old Halyna, she is chopping wood.

"I have a cat!" she laughs, and adds quite earnestly: "It is a living soul!" 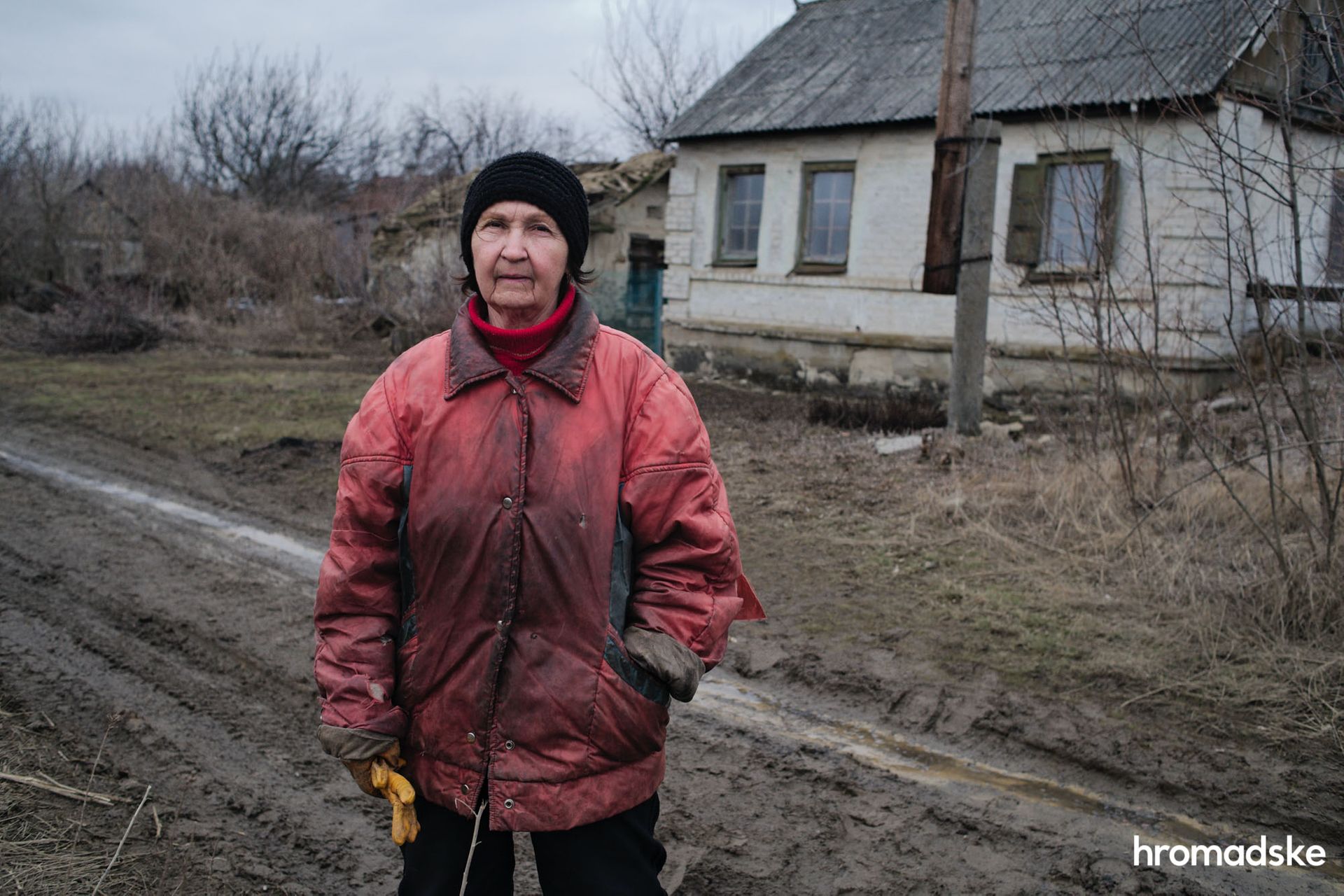 Halyna, 72, is one of ten residents of the village of Novooleksandrivka. Photo credit: Max Levin / hromadske

Unlike other residents of Novooleksandrivka, she was not born here. She comes from Starobilsk where she used to work as an engineer at a factory. But more than 20 years ago, she chose Novooleksandrivka and moved there.

"First of all, I like it. Outdoors. I’m up in years. It’s good here. My own produce, I have a garden, I have work. I don’t want to sit still for the rest of my life - I'm used to working," she calmly explains.

"The store is seven kilometers away. I [usually] ask men to bring [groceries] by bicycle. But now they can’t pass. Yesterday I went alone. My leg hurts [now]. That’s seven kilometers one way. I like walking, but my health isn’t what it used to be,” she sighs.

Halyna says that it is too late to change anything at her age. But then she clarifies: if she were allowed to take her belongings, she would at least seriously consider moving. "And many in the village would too," says the pensioner. 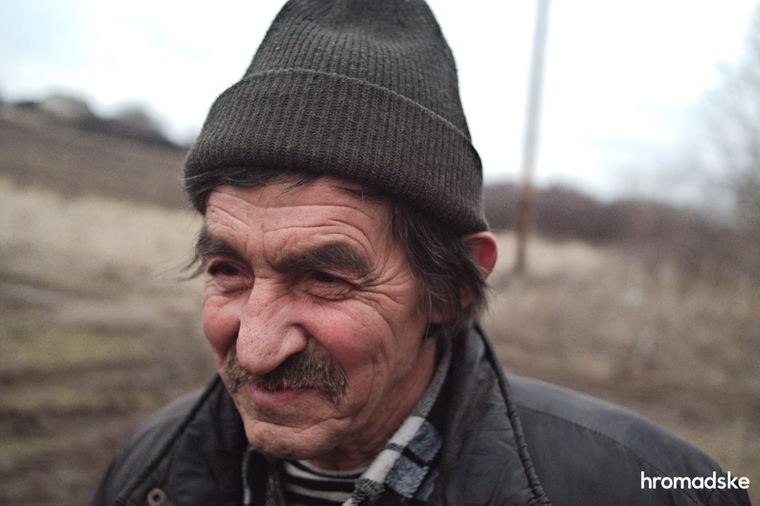 "We can still go to [“Space” Street], to see Baba Hanna. Where the circus "Space" burned down. Where the street flew into space," Volodymyr never grows tired of using irony.

In September, according to Hanna, 14 houses burned down on the street due to a strong fire. Three more were burned earlier - as a result of shelling.

The 76-year-old woman says that Novooleksandrivka is popularly called Rubashkyne.

"Mr. Rubashkin lived here, where we stand. This was his land. My mother said that he was a good man. He had five daughters. He always brought food to people who lived in poverty. And another gentleman lived where the state farm later appeared. He wasn’t very popular. He occupied that territory, and the other one occupied this territory, this side," she says.

A good gentleman, a bad gentleman, "humanitarian" aid for holidays, this side and that side, there is no road and no electricity - not much has changed here in the last 100 years.

/ With the support of the Russian Language News Exchange