“The military man understands: he may end up in this car body, in a bag, and I will bring him home to his mother”
2322

Activists of the campaign "Women strike: we don’t fold umbrellas" protest against the bill to ban abortion, Gdansk, Poland, April 15, 2020. The first mass protest took place on October 3, 2016. On that day the protesters were under umbrellas because it was raining, and since then the umbrella has become a symbol of this women's movement. EPA-EFE / ADAM WARZAWA

While the world is debating how to fight the coronavirus, Polish authorities have decided to further strengthen their already strict abortion laws. In recent years, attempts by local politicians to limit women’s rights have provoked thousands of citizens into protesting. Poles have even found ways to protest during a pandemic – when mass gatherings are dangerous and prohibited.

At first glance, this is a typical line to a store, which have been frequent in recent weeks. Almost everyone wears a mask, and many wear disposable gloves. Only one client is allowed inside the store at a time, so everyone else has to wait on the street for about an hour, keeping the social distance – 2 meters to the person in front, 2 meters to the person behind.

But everyone in the line has printed or homemade placards: "Hell for women", "I have a right to choose", "Abortion is OK", "My body is my business". Many drawings depict a female face in a medical mask with a lightning symbol.

This is what you could have seen last week in the downtowns of Krakow, Lublin, Warsaw, as well as dozens of other Polish cities and towns. For the tenth time in the 4 years, Polish women, as well as men, have protested with black umbrellas to demonstrate disagreement with the tightening of already tough abortion legislation. 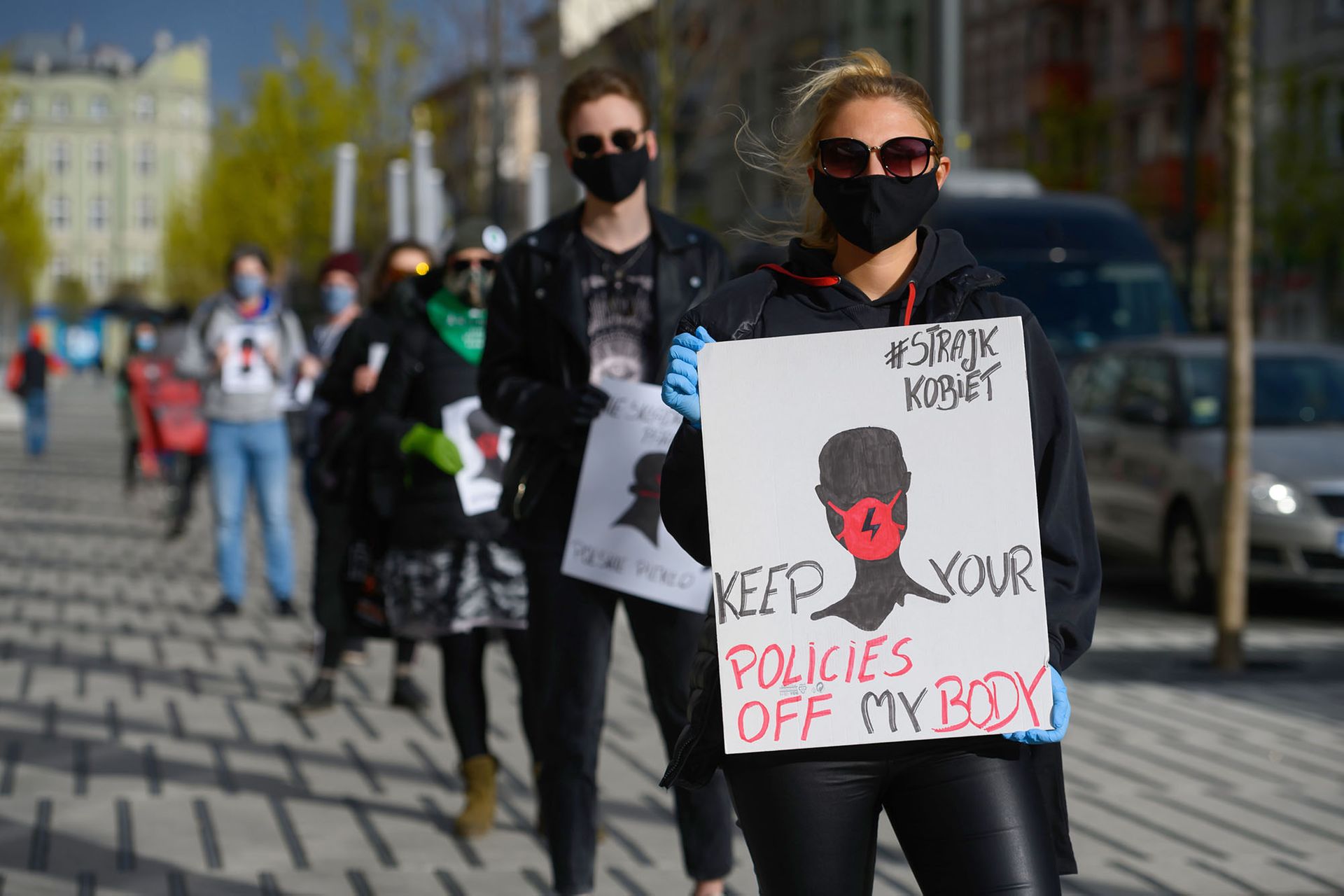 A protest against the abortion ban in line to a shop, Poznan, Poland, April 14, 2020. Photo: EPA-EFE / JAKUB KACZMARCZYK

The fact that the Polish parliament wants to decide on women's reproductive rights in the midst of a pandemic is perceived, by many Poles, as particularly cynical. That’s why they decided to protest despite the coronavirus pandemic.

Despite the quarantine, on April 15 and 16, the Polish Parliament, the Sejm, voted for the bill “Stop Abortion” in its first reading. The leader of the public initiative with the same name, Kaja Godek, a lawyer and mother of a child with Down Syndrome, has demanded that one of three exceptions when abortion is allowed, namely serious genetic defects in the fetus, is excluded from the Polish law on abortion – one of the most severe in the EU.

In 2018, 1,076 abortions were performed in Poland, 98% for this reason. Therefore, the proposed legislation can almost completely deprive Polish women of the possibility of abortion.

Godek speaks about the "return of dignity to embryos" and the "cessation of eugenic torture", and her opponents about the abuse against women who will be forced to bear the fetus which is often unviable outside the mother's body, for 9 months.

Critics of the bill also suggest that the ban will impair access to prenatal research – public hospitals will stop referring patients for additional examination if pregnancy cannot be interrupted anyway. 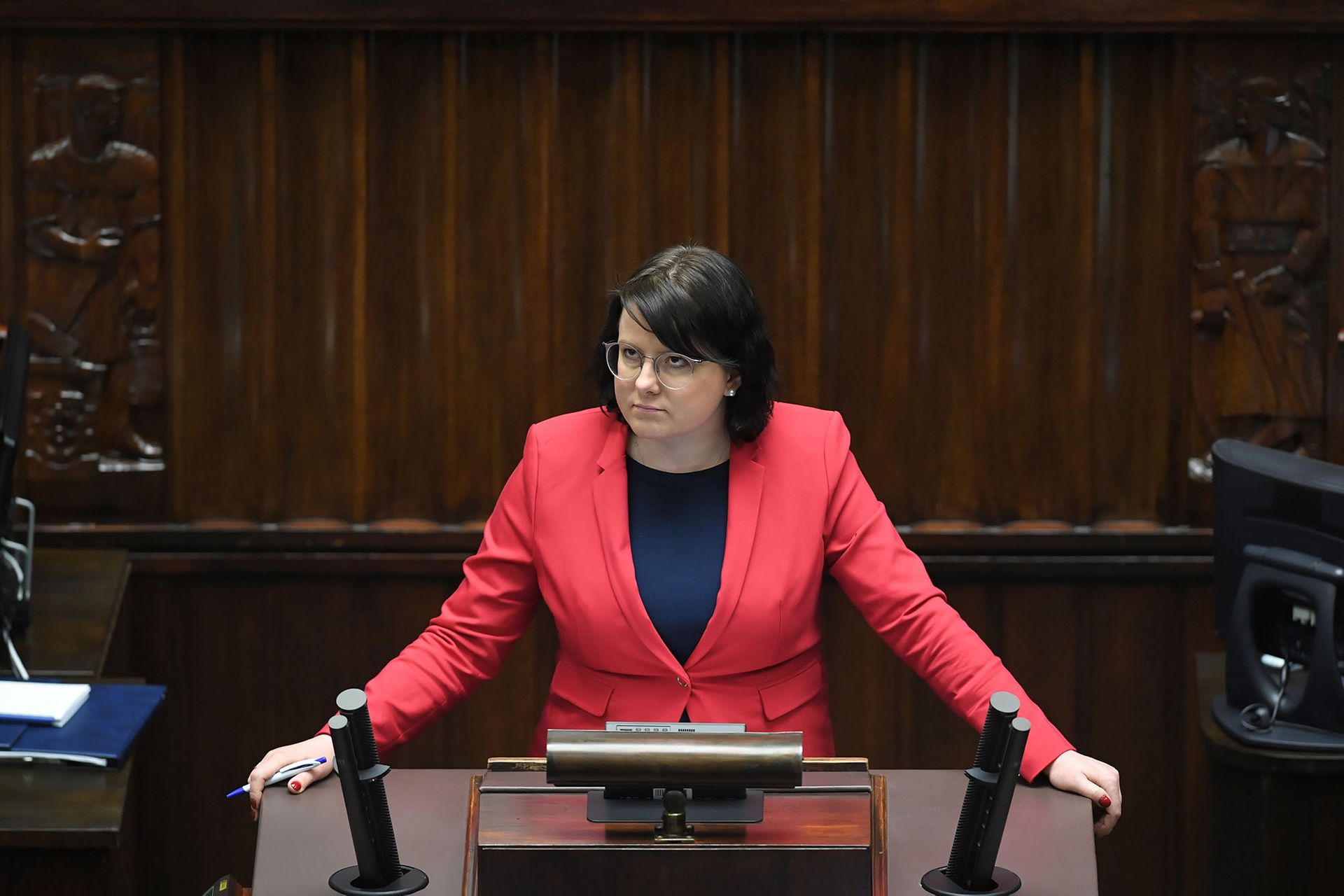 Leader of the Stop Abortion initiative and author of the bill of the same name Kaja Godek speaks during the Sejm meeting and discussion about tightening the abortion legislation, Warsaw, Poland, April 15, 2020. Photo: EPA-EFE / RADEK PIETRUSZKA

Godek presented the first bill, aimed at a complete ban on abortion, back in 2013. More than 830,000 Poles signed it at the time. However, the ruling centrist Civic Platform party did not give it a go.

The discussion started again after the conservative Law and Justice party (PiS) won parliamentary elections in 2015. During the election campaign, party leader Jarosław Kaczyński made a lot of efforts to get the votes of pro-life activists, and Godek’s bill returned to the Sejm in the fall of 2016.

Then started the “black protests” – marches by women who, following the example of activists in Iceland in the 1970s, refused to go to work – in more than a hundred Polish cities. Protests in support of Polish women were held in several countries around the world.

It was the first-ever large-scale mass protest against PiS policy. As a result, the Sejm rejected the bill and sent it for further elaboration or, as Polish political commentators put it, “into the freezer”, meaning that the bill does not go further, but can be returned to the session hall at a convenient time.

And it happened this time too: Godek’s bill was filed to the Sejm of the previous session, and the new parliament, elected in October 2019, had half a year to put it for the first vote. The fact that politicians, knowing how controversial this topic is, decided to vote during the pandemic and general isolation regime has caused a lot of anger.

"Do you think we are idiots?" left-wing MP Magdalena Biejat asked from the stand in the Sejm on April 15. "It is the pinnacle of hypocrisy and cynicism that you are telling us today to consider this soulless, barbaric bill." 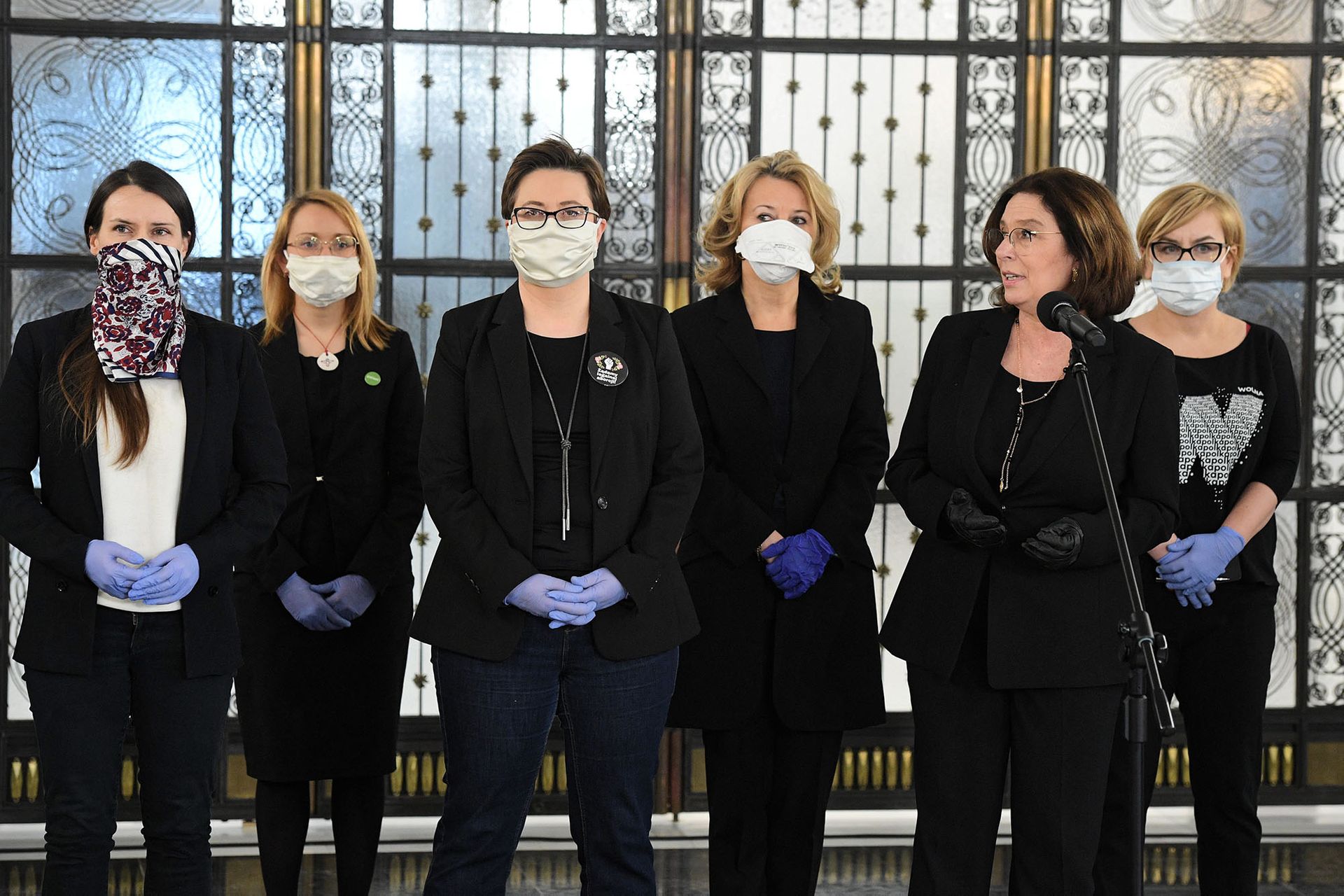 Severe anti-epidemic measures have been in place in Poland since mid-March. Today, Poles cannot go outside except to work, to the store and to the doctor. Mass gatherings are prohibited, and even people living together must keep a distance of 2 meters from each other on the street.

Therefore, the organizers of the "black protests" – the association "General strike of women" – had to decide on how to protest. The fact that the PiS party is not particularly concerned with outrage on social networks has been proven by online protests against judicial reform. They decided to focus on lawful methods, like placing protest graphics on private cars, placards in windows, and "lines for freedom" – demonstrating placards while waiting to enter a shop.

"Together with our 4-year-old daughter, we made placards and hung them on the window so that they could be seen from the street," says protest participant Katarzyna Kwiatkowska-Moskalewicz, a reporter and researcher on the history of post-war Poland. "Although it has been a few days, I am still angry. The Polish authorities, for fear of mass protests like in previous years, cynically use their own anti-virus bans. I haven't felt so powerless and angry for a long time."

Many members of groups in social networks have confessed that they feel particularly powerless.

"People die because of the virus, they lose their jobs, they are locked up. Many of us will have post-traumatic stress disorder after the epidemic. And here is another reason for fear – if I become pregnant and the fetus will be ill, deformed, unable to live independently, my state will still force me to bear it and give birth," reads a popular post in "Women to Women" (“Kobiety Kobietom”), a closed group with more than 100 thousand members.

Women also point out that the pandemic and quarantine have caused a sharp increase in domestic violence in Poland. Wives and children are often locked in the same apartment as their abusers, but this issue is not a concern for the authorities – the Ministry of Labor, Family and Social Policy offers offenders remote monitoring of the situation. According to the Ministry, a woman should not leave her abuser now, because it threatens the general epidemiological situation.

Although the protesters on the street stood in line at a distance from each other, the police still issued some fines. And the public TVP Info channel compared the lightning on their masks to Nazi Germany’s Schutzstaffel (SS) symbol.

"It is unbelievable how a pandemic has accelerated the disintegration of democracy," says Kwiatkowska-Moskalewicz. 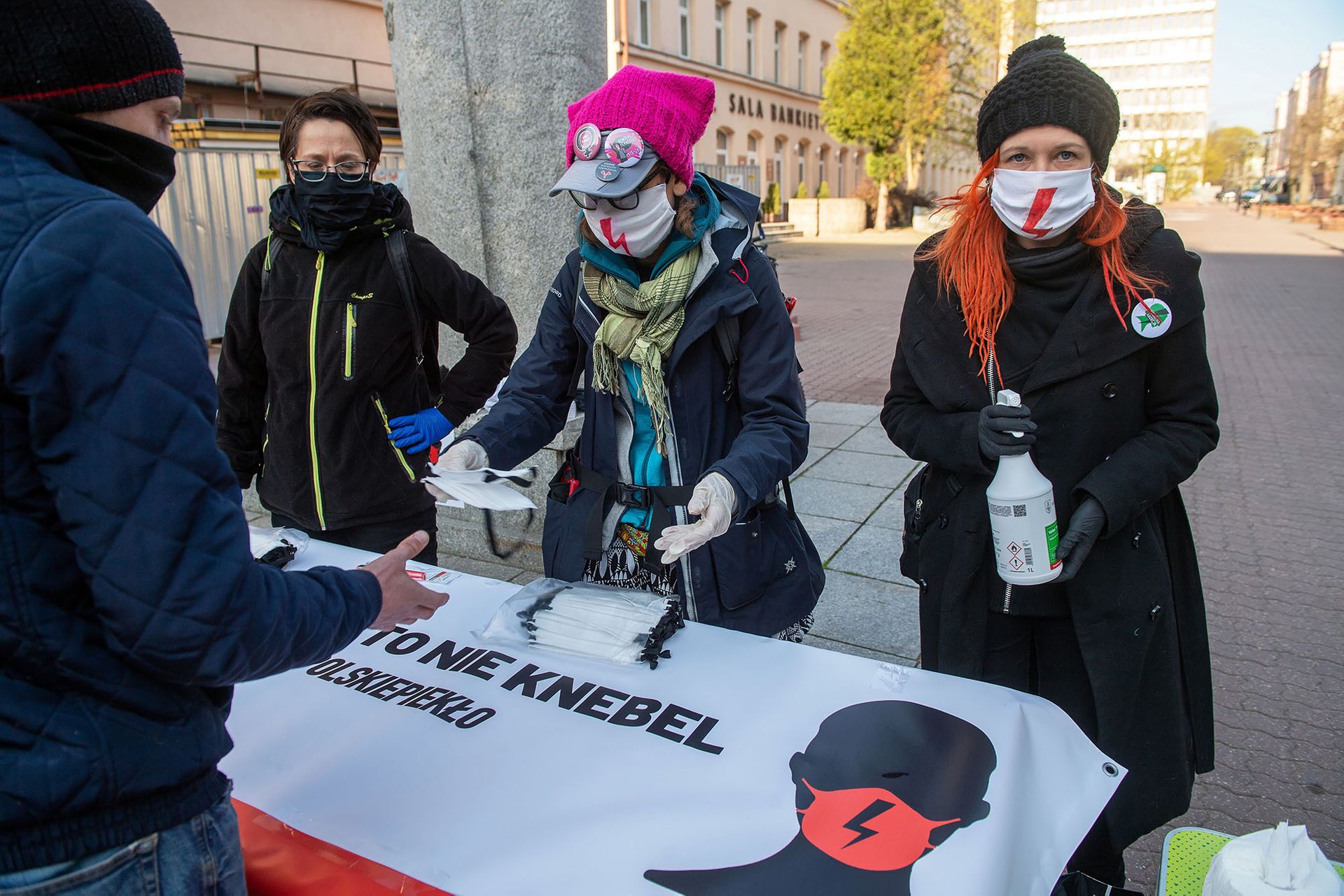 Before the Next Battle

On April 16, the Sejm decided to redirect the Stop Abortion bill for further consideration in parliamentary committees. But is it a protest victory? For Kwiatkowska-Moskalewicz, it is difficult to assess the situation in the terms of success or defeat.

“More and more women are joining the movement for their rights. As citizens, we have passed another test. But we are still hostages to this power that will blackmail us with this barbaric bill. Abortion is a procedure, the fetus is not a person but a woman is, and it is she who has the right to make decisions about her own body. The case is not closed until the Polish women have free access to safe termination of pregnancy,” she said. 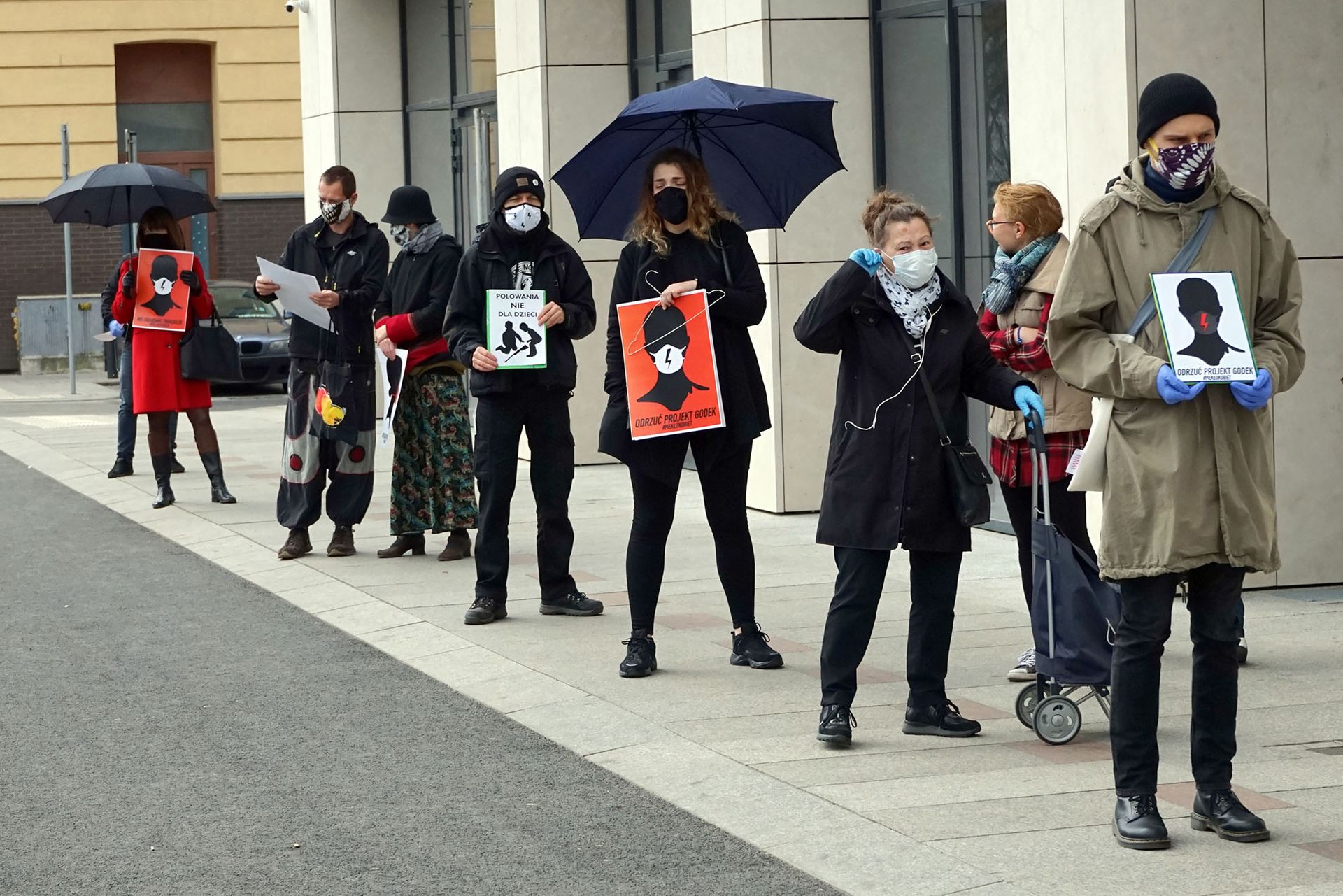 In addition to strengthening abortion legislation, the Sejm last week also voted for several bills that particularly angered a part of Polish society: on the participation of minors in hunting, the restitution of Jewish pre-war property, and the prohibition of sexual education in schools. All of them were also sent for revision.

Experts have no doubt that PiS uses these controversial initiatives to divert public attention from the situation in the economy (where mass layoffs and drops in production have already started due to the coronavirus) and politics (despite the pandemic, the government intends to hold presidential elections set for May 10).

Although most Western countries have postponed any voting at the time of the pandemic, the PiS party, thanks to a majority in the Sejm, passed a law on postal voting. This decision has been criticized by the opposition and the international community because there is no time for proper preparations, the candidates are deprived of equal access to campaigning, and there will be no observers.

Therefore, it is possible that the number of lines with people with placards will increase in Polish cities in the coming weeks.