AP releases video from paramedic Taira's body cam, who handed over footage the day before she was captured by Russians
6337

EXCLUSIVE: The True Cost Of Remaining Ukrainian in Crimea
7714

hromadske journalist Mariana Pietsukh with her son in a modular town for migrants in Lviv Photo: Alexander Ferens / hromadske

In Ukraine, modular towns for internally displaced persons from Donbas began to appear in 2015. Seven of them were paid for by Germany — in Kharkiv, Dnipropetrovsk and Zaporizhzhia oblasts. The housing was planned as temporary, with a service life of two years. But people stayed in them longer.

As of September 2021, 1,323 people lived in seven modular towns. One of them — in Kharkiv — was declared unfit for habitation in 2020 after a technical examination. And yet, people stayed there.

After the full-scale Russian invasion, container housing began to be built in the west of the country. We found out how IDPs are treated and whether the living conditions are adequate for a normal life. 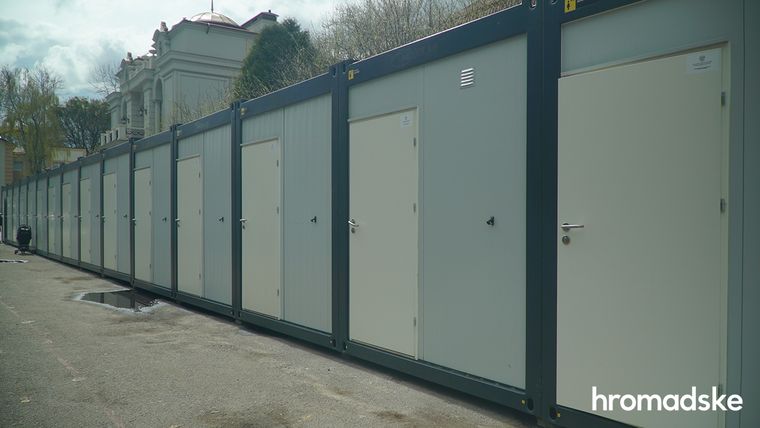 Containers of a modular town for migrants in Lviv. Photo: Alexander Ferens / hromadske

"Do you hear thunder? Aren't you scared?"

"From the sound of thunder? Nooo," says Vova, a third-grader, smiling in surprise. "At first it wasn't scary in Mariupol, but then it started to thunder a lot, and it got scary."

We are hiding from the spring rain with thunder in a tent with a play area in the largest park in Lviv, where Vova now lives with his two older sisters and mother Tetiana.

A modular camp for IDPs was set up here in April with the financial support of Poland. These are 88 container-type houses, where 350 people already live. There are plans to accommodate IDPs in two more such towns in the residential areas of Lviv in May.

"We already have approximately 300 migrants in line. We note down almost everyone in our register, and then choose by category. Women with children, or large families were recorded here," said Ihor Kobryn, head of the social protection department of the Lviv City Council.

Each container is designed for four people. There are two bunk beds inside, two cabinets with shelves, one table and two stools. If the family has three or more children, one bed is divided into two.

"No, we are not crowded. The two youngest ones are perfectly placed on one. We are simple, unpretentious people, we have enough of everything here," said Stanislav, an immigrant from Slovyansk and a father of four.

His youngest son is only a few weeks old. The family was leaving Slovyansk when the maternity hospital was already closed, so the boy was born in Lviv.

Now they share one bath for babies with neighboring children. There are no washbasins in the rooms, it is troublesome to install pipes with water supply in each home. Water is only available in containers with toilets and showers. Here dishes are washed and other things by hand. But local authorities promise to buy several washing machines. 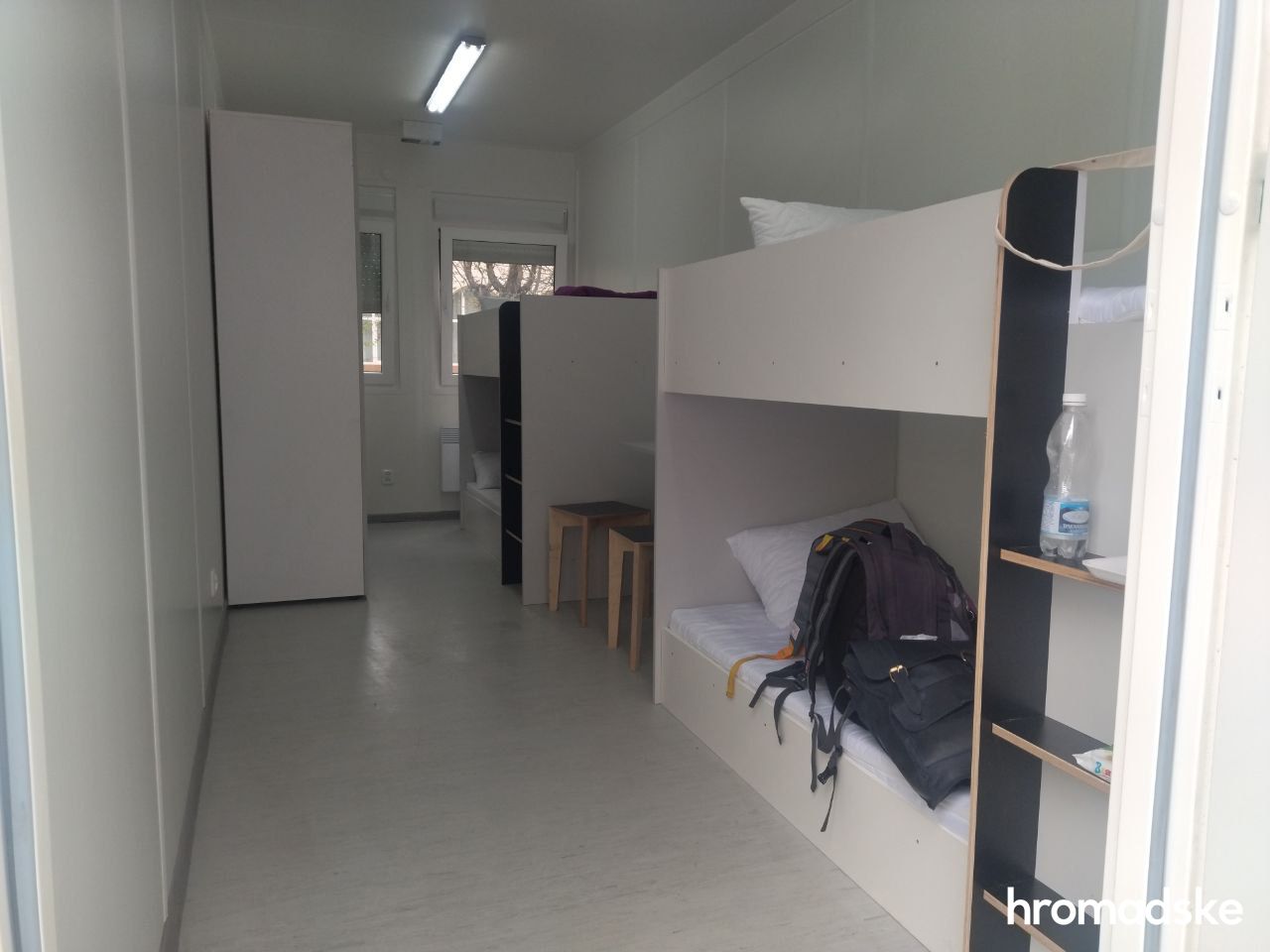 There are also no electric stoves or multicookers. So it is almost impossible to cook food yourself. Allegedly, the temporary power grids may not withstand the load. Therefore, new residents are warned that even electric kettles are prohibited here. But there are no restrictions on electric radiators. They come with each home.

An alternative to the kitchen here is a fairly spacious dining room of 14 blocks. It has three large thermoses with hot water, two microwaves and three refrigerators.

Free hot food is brought here once a day. It is planned that in the future residents will be issued certificates for which they will be able to redeem at the university cafeteria.

Now everyone receives a set of bed linen during check-in. Like pillows, they were financed by the Lviv city budget. The city also pays for electricity, water supply and garbage collection.

"The first request from the people is to give them buckets and mops so they can clean," said City Council official Ihor Kobryn.

Several sets of mops with buckets have already been purchased, and people are sharing them in turns. But many residents have already bought brooms and buckets, because there are no bins inside the containers. There is also a need for clothes hangers.

As for the clothes, there are enough of them. A humanitarian center is organized in the neighboring library building, where huge amounts of humanitarian aid are brought. 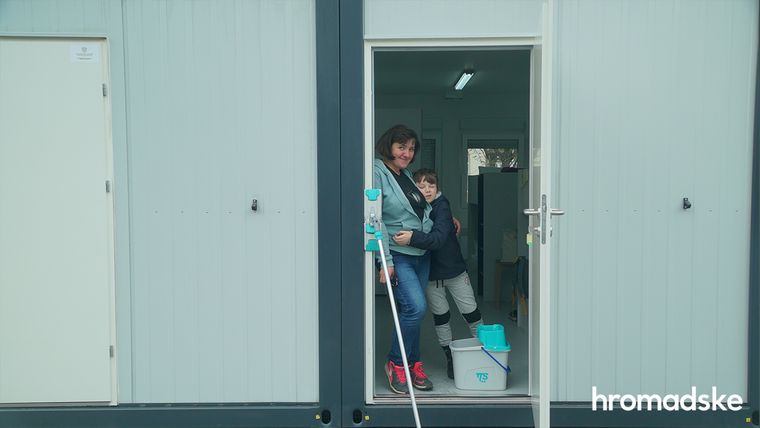 At the station when the rocket fell

"Did they bring rubber boots with them or got them here?" I ask the grandmother of six-year-old David from Kramatorsk, who is jumping into puddles.

"Here. There we ran out in whatever we had on," Iryna answers.

"I came in moccasins!" adds David.

"We were at the station when it…" Iryna can not speak further.

When she says "it", she means "a rocket fell". On April 8, when the occupiers fired on the Kramatorsk railway station, Iryna and her family were there.

After the rocket attack with dozens of victims, the family stayed in the city for another three days — they were afraid to leave. But in the end they mustered up the courage and did.

Two more children, David's younger brother and sister, are peeking out of the container next to Iryna. They happily list the colors of the rainbow that appeared in the sky after the rain.

“I really like it here, because there are master classes every day! And look what we were given, what a painting set!" the girl enthusiastically tells about the UNICEF tent, which was set up near the housing where classes with children take place every day and a psychologist attends to them. 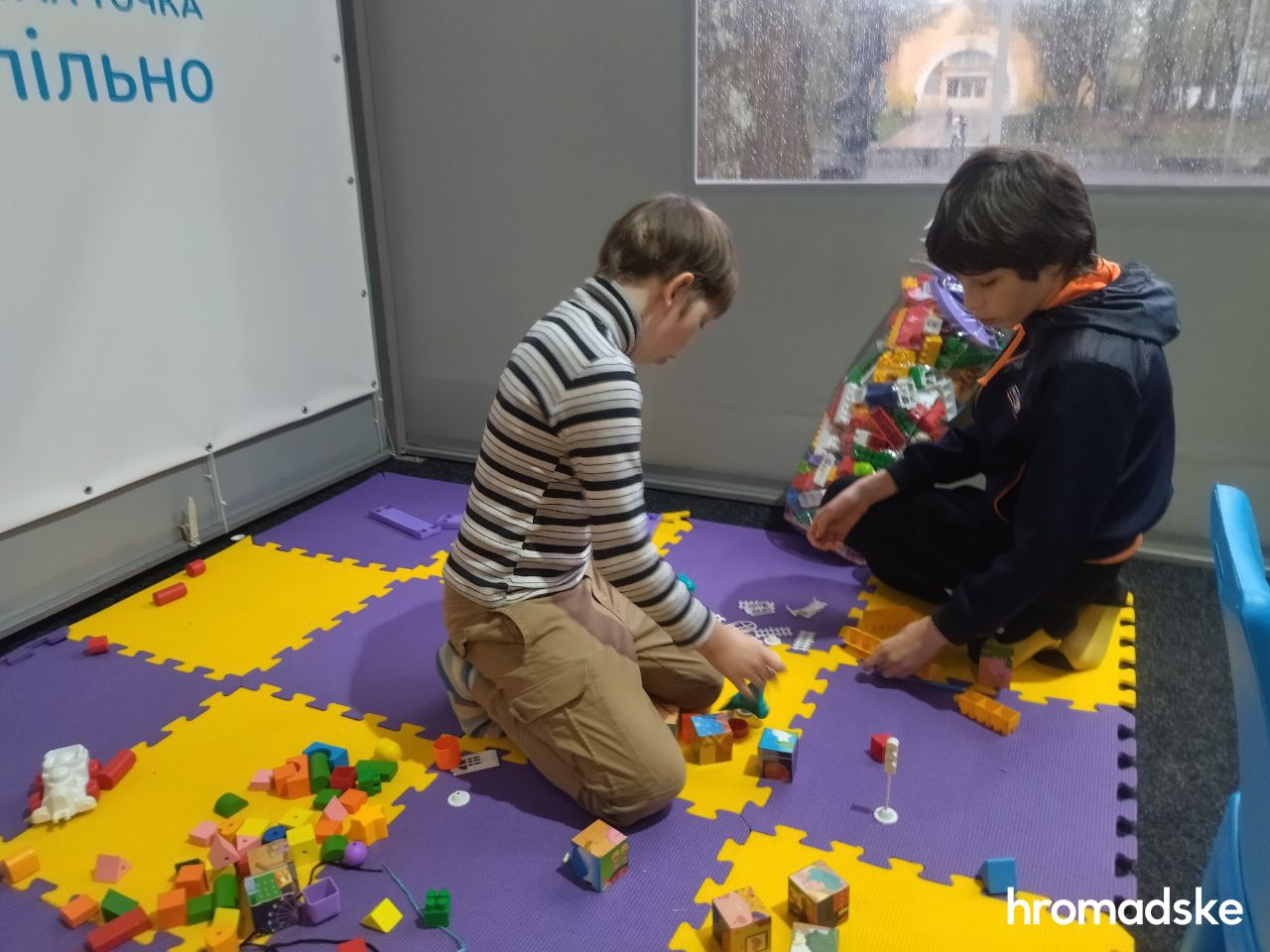 Near the modular town, children are entertained and taught in a tent by UNICEF. Photo: Mariana Pietsukh / hromaske

"And I saw a squirrel here! She grabbed our nut and disappeared. I really like it here, my grandmother and I take a lot of walks in the park," interrupts David.

"So you don't want to go back?" I ask this cheerful family.

"Well, of course, we want to go home. The body is here and the soul is there," says Iryna. But David has his own opinion: "No way. I want to live here, in Lviv."

So that the temporary does not become permanent

The city council does not rule out that people will live here in the winter, the radiators in the rooms allow it. After all, not everyone has a place to return to.

"No, I can't stay here (in the modular town - ed.). for years. I have to look for a job and get back on my feet," says Tetiana from Mariupol, the mother of the same Vova, who is not afraid of thunder.

She explains that she did not go abroad because her older daughters are in graduation classes, they need to get a Ukrainian certificate. And if they enroll in Lviv universities, the whole family will settle down in the city forever.

"We will not return to Mariupol because our house has been bombed. I took the children out and covered their eyes with my hands so that they would not see these bodies on the road. Although they have already seen people being buried near houses," adds Tetiana. 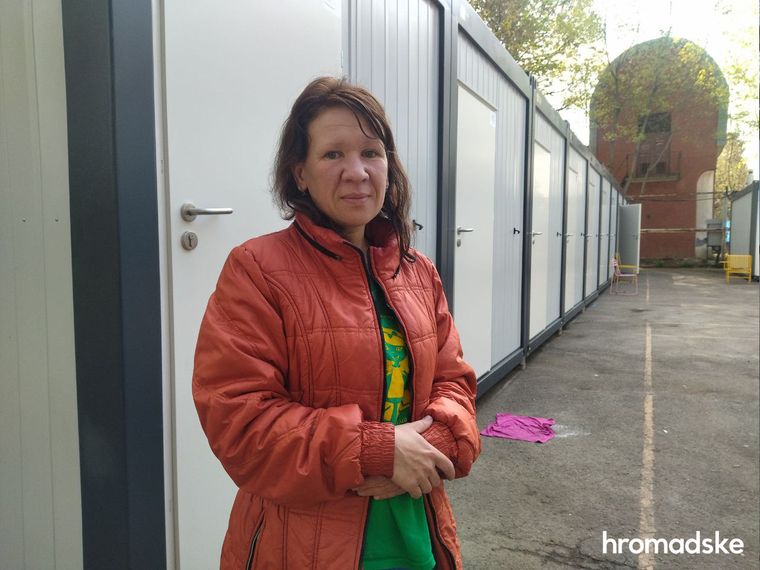 Mariupol resident Tatiana hopes to find a job and rent a room in a dormitory. Photo: Mariana Pietsukh / hromaske
An air-raid siren sounds in the modular town. Kharkiv resident Natalia stays at home with her children. She's just mopping the floor. After the rain, everyone has the same problem — the mud from the shoes is brought inside.

"It needs to be clean in case we are struck," Natalia jokes. She does not run to the shelter even after rockets fell in Lviv. Because it is nothing on what they experienced in Kharkiv, when shells fell not in the distance, but right before their eyes.

The woman is not planning to leave Ukraine: "Why go abroad? Here we are at home, in Ukraine — whether in Lviv, Kharkiv, Myrhorod, or in Kyiv, but we are at home!"