Will Ukraine Get Its Own Unified Orthodox Church?
8499

Over a month has passed since the political establishment started talking about the constitutional crisis in Ukraine. At the end of October, an emergency meeting of the National Security and Defense Council took place, where it was decided that the integrity of the Constitutional Court needs to be urgently restored. However, the president's legislative initiative did not find support in parliament. Moreover, even within his own faction.

This crisis has exposed the problem of Volodymyr Zelenskyy – an obedient “mono-majority” no longer exists in the Rada. Although this continues to be denied. In particular, by the head of the presidential party Servant of the People, Oleksandr Korniyenko.

He tried to convince us that the legislature is still able to make important decisions. And that the constitutional crisis has not yet become the cause of a political crisis.

There is talk of several crises at once in Ukraine. If you combine them, you get the "perfect storm". Which of these crises – constitutional, political, economic or budgetary – seems to you the biggest?

The biggest crisis now is medical and organizational.

There are different views on the crisis. There is a "crisis as a chance, build windmills" - this may relate to the economic crisis. During economic crises, many economies grew. And ours, perhaps, will also grow if we act correctly.

Even if we talk about the crisis of the Constitutional Court, this is also an opportunity. At least, society has learned in 25 years that [we do have problems], not only with domestic courts, where people cannot solve their cases without certain extra conditions. But in our country, the country's main court – the Constitutional Court – can also make dubious decisions.

Regarding crisis resolution. Where is the country control center now?

According to the Constitution, our control center is located in three buildings. It is there, in principle. One building is on Bankova Street, which is the President's Office.

It seems that these three buildings don’t work as a whole. Parliament is separate, the president works separately.

I don't think it’s like that. Maybe it is so for some people. We are in constant contact with each other. Yes, we can have a lot of discussions. But still, decisions are being made, and they are further implemented. 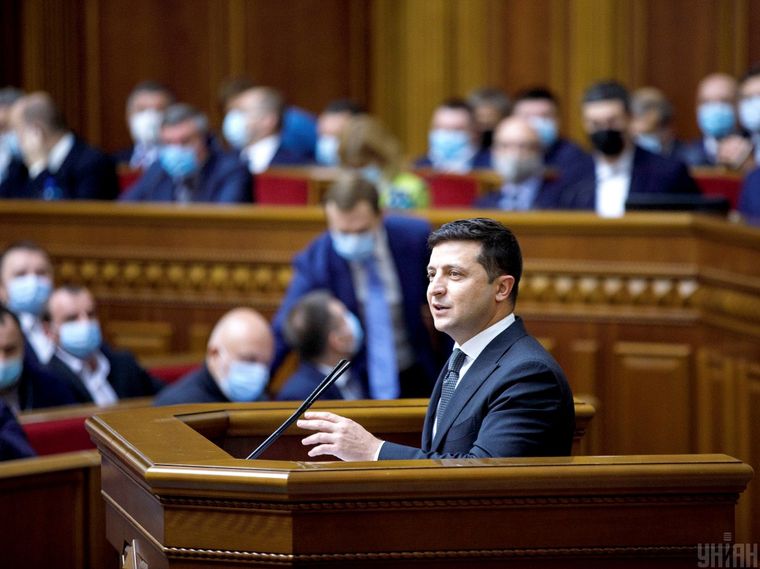 President of Ukraine Volodymyr Zelenskyy during a sitting of the Verkhovna Rada of Ukraine. Photo: UNIAN

The recent [constitutional crisis] story has shown that the split between the president and the speaker has reached its extreme.

These are some of your journalistic narratives: split, war...

You are talking of one team. But a member of your team, a member of the president's team, without warning anyone, especially Zelenskyy himself, comes up with an alternative proposal. Is this team game?

I will not advocate Dmytro [Razumkov] or Volodymyr [Zelenskyy] right now. This process was quite emotional, chaotic. Everyone tried to solve it as soon as possible.

If you remember, a few days later I also passed a bill on the powers of judges. 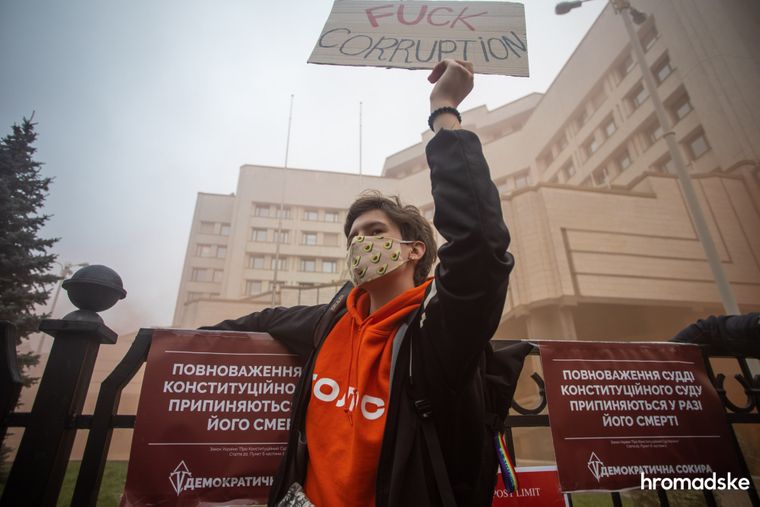 Protest in front of the Constitutional Court after the court's ruling on e-declaration. Photo: Oleksandr Khomenko / hromadske

Did you coordinate your initiative with the Office of the President?

Yes, we did discuss.

First of all, we do not know how it [happened]. Who informed whom about what. And there was a kind of stage-by-stage approach. I already contributed to the second or third (stage – ed.) After those events. 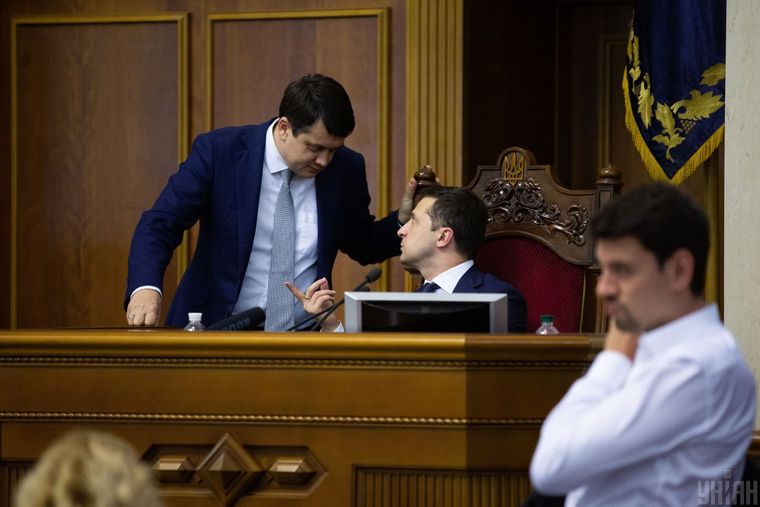 First of all, the so-called mono-majority can no longer make the decisions proposed by the president. The constitutional crisis has shown this. How many people are there in the faction now that the president can still count on?

I think these conversations are exaggerated. The faction does vote. When there are 210 people in the hall, the budget vote gets 209. Is this a crisis? We have 20 people in the hospital. 25.

[Rumors say] there are 160-180 MPs left in the faction who are loyal to Zelenskyy.

I won't estimate the number now. 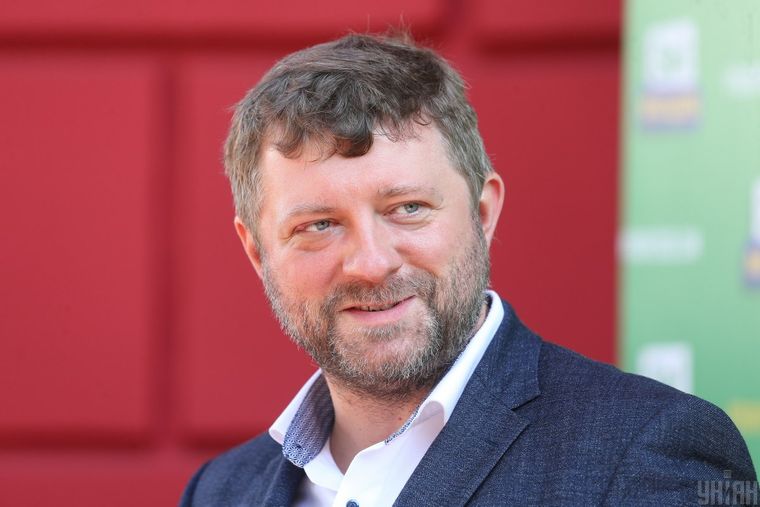 But you don't have enough votes. You walk around the hall, agree on voting.

That is tabloid language. There are decisions that find support among many factions, which they consider aimed either at their electorate or the state. We will not refuse them to make good government decisions.

Previous parliamentary week, they wanted to vote on the dismissal of ministers. In particular, the Minister of Health Maksym Stepanov.

I don't know about that. These are rumors. There was no statement, there were no committees, there was nothing. These are some rumors.

Some say that they were not considered because there are no votes for it.

In our country, the prime minister can propose the dismissal of ministers. Or they write of their own accord. If there is a consensus in the government between the prime minister and the ministers on who is working / not working, we will be notified quickly. If we do not have any official documents, then they all continue to work.

Do you think that Stepanov is not coping with the corona-crisis and may be a candidate for dismissal?

I don't think now is the time to make any healthcare-related dismissals or appointments. Because the situation is very critical now, it needs to be addressed urgently. But if the minister himself wants to leave, we will not force him to stay. Although 226 [votes] is also needed for this.

Is there talk in parliament about other groups or factions joining the majority?

I think there are always a lot of people who want to join a coalition. The same goes for positions.

Do you wish to get some of them involved?

I do not think that a coalition process should be launched now. It is impossible to launch it as long as there is a faction with more than 226 MPs. Therefore, it is not very clear how a coalition can be created now. It will be an inter-factional union without any legal status. That is why it is difficult to have such conversations even legally.

With whom do you agree on voting in the hall?

We do not agree with [other] factions on any systemic voting. 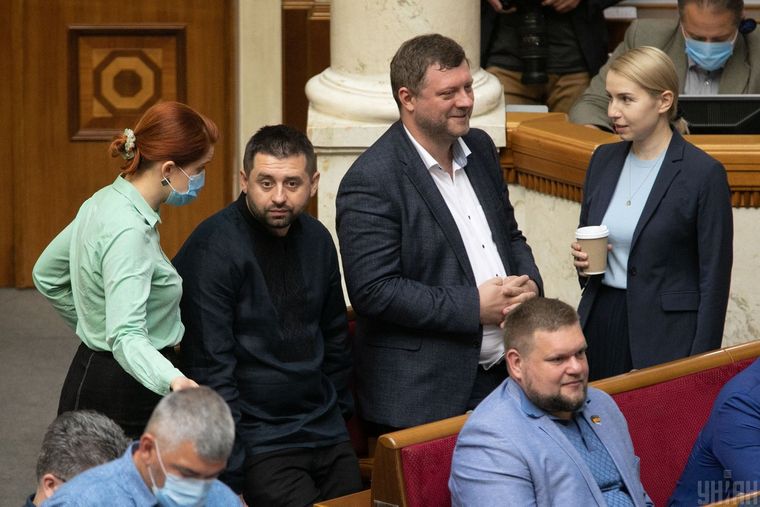 For each vote, you or Arakhamia (head of the "Servant of the People" faction – ed.) approach other factions to negotiate.

It doesn't work that way. The committees are looking for votes to amend the bill. If there is still a problem, then we offer at the level of faction leadership, ask their opinion at least: "What will you do with this law? – That's why we don't vote. We would vote for this. – Okay".

Support for the bills is different from different factions on different topics. Economic bills are supported by Golos. As for the army, everyone supports it, they understand that there is a war in the country. Something social will probably find support with [Yulia] Tymoshenko, because her committee often works on it there.

If you see that there is no stable majority of 226 votes in the faction to support the initiatives of the prime minister, the president – with whom could you create a permanent majority? An inter-factional union, as you said.

Ideologically, there are at least two opposition parties in parliament. They position themselves that way.

Opposition platform – For Life says: "We are the opposition." On the other hand, European Solidarity also claim: "We are a patriotic opposition."

Based on this logic, that almost everyone calls themselves the opposition, except for the parliamentary groups, it is difficult for me to predict how to form a coalition with them. If theoretically such conversations are conducted at all. So far there is nothing to negotiate on.

Under what conditions can you unite with Batkivshchyna?

It's all hypothetical. Provided that they will fulfill 100% of our program, the program of the president.

Is it possible to unite with Poroshenko's party?

I do not think that ideologically it is possible.

I also think that it is ideologically unlikely.

There are no serious ideological differences. But again: the economic platform is a little different and they have a different view on resolving the conflict in Donbas.

The group For Future?

As far as groups go, it’s difficult to understand where they are ideologically. As for the Dovira group, there are several parties united. It is hard to grasp.

But Dovira joins you in voting the most. Regarding the For Future group. On the eve of the local elections, it was said that Ihor Palytsia and Ihor Kolomoisky, in addition to this group, have almost 40 other MPs within your faction. And thus they can blackmail both the faction and Zelenskyy himself to form a coalition with them. What is the deal now?

So far, there are no such coalition talks in parliament. There is a story that has been going on for a year now: every bill we go around searching for votes. Primarily through authors, or lobbyists, or committee chairs. Also – through the leadership of factions, if we are talking about some serious big [issues], such as the budget. Such issues are crucial – they require agreement of many people.

Servant of the People
More on this topic
1672
Ukraine

Lessons Commence for Servant of the People MPs
2931
Ukraine

"Servant" and the Rating: Ukraine’s Zelenskyy Retains Popularity Even a Year Later
2353
Ukraine

Parties’ Funding: Businessmen, Volunteers and Kolomoisky’s People Within Servant of the People