“Our Kids”: Crimean Resistance to Political Arrests In Numbers
32039

20 doctors arrived from Ukraine to Italy on April 4 to help one of Europe's most coronavirus-affected countries fight the pandemic. Three days later, another military aircraft landed near a military base near Rome, bringing 5,000 liters of disinfectant solution. The decision to assist Italy was approved by President Volodymyr Zelenskyy and was being implemented by the Ministry of Health and Ministry of Internal Affairs (MIA) with the support of diplomats.

However, in Ukrainian society, not everyone understands why Kyiv is sending aid to Italy, given that Ukraine's preparedness to fight the coronavirus is unclear.

"Everything is great, of course, but how are you helping the Ukrainians in Ukraine?", "How can you leave the doctors in your own country without protection but show our nobility to the whole world?", some Facebook users commented under the post by Ukrainian Deputy Interior Minister Anton Gerashchenko about the humanitarian cargo that Ukraine had sent to Italy.

There are plenty of similar comments under posts by other state officials and media about Ukraine's assistance to Italy.

Hromadske asked representatives of the Health Ministry, the Interior Ministry, Ukrainian diplomats in Italy and experts why Kyiv is helping Rome and whether Ukraine can afford it.

Health Ministry: This Mission Is for Gaining Experience

The Ukrainian delegation that arrived in Italy on April 4 consisted of infectious disease specialists, resuscitators, surgeons, anaesthetists, endocrinologists, neuropathologists, and nurses. All of them, according to the Ministry of Health, flew to Italy voluntarily. Ukraine provided protection and payment for their work, while the Italian side provided accommodation and food.

The Ukrainian doctors are working at the two hospitals in Pesaro and Urbino in the central region of Marche ranked 6th in Italy with regard to the number of coronavirus-related deaths. As of April 13, there were 713 deaths in the region.

“We have sent a team of 20 doctors to Italy. This is not critical for Ukraine at the moment,” said Viktor Lyashko, Deputy Minister of Health of Ukraine, in a comment to hromadske. "This is even pragmatic, as this team will gain invaluable experience, return to Ukraine and pass it on to our [Ukrainian] doctors."

According to him, Ukrainians will learn Italy’s experience of treatment, prevention of the spread of the disease, and the doctors’ working conditions.

Twenty Ukrainian doctors have arrived in Italy to assist Italian doctors and to gain experience in one of Europe's most coronavirus-affected countries. Photo: Embassy of Ukraine in Italy / Ambasciata d'Ucraina in Italia

One of the Ukrainian doctors, Hlib Bityukov, has already been sharing his impressions.

"All clothes are disposable, except for glasses that are sent for disinfection, and are removed every time you leave the ward," he wrote about the equipment and working conditions in the Italian hospital.

“You can go out freely, you just have to warn that you are going out and take off all your clothes except your uniform. It is removed at the end of the shift and remains in the laundry basket. Everything new is waiting for you in the morning. The ward has a small staff room that has water, fruits, chocolate, yogurts. It's all brought in by volunteers."

The Ukrainian Health Ministry also claims that Ukraine has sent to Italy what it can afford.

“We are sharing resources that are not critical to our health care system. That is, nobody wants to do anything to the detriment of our country. Everything is done bearing in mind the possible developments,” says Viktor Lyashko.

The Role of the Interior Ministry

Prior to the departure of the aircraft from the Igor Sikorsky Kyiv International Airport, Interior Minister Arsen Avakov gave a press conference together with Italian Ambassador to Ukraine Davide La Cecilia.

“Many Ukrainians work in Italy. According to unofficial data, about 100 of them are in intensive care. By helping Italy, we will help ourselves,” said Avakov.

"We are doing this in pursuance of the presidential decree," said a spokesman for the Ministry Artem Shevchenko to hromadske. "National Guard aircraft, 10 out of 20 doctors are from the MIA." 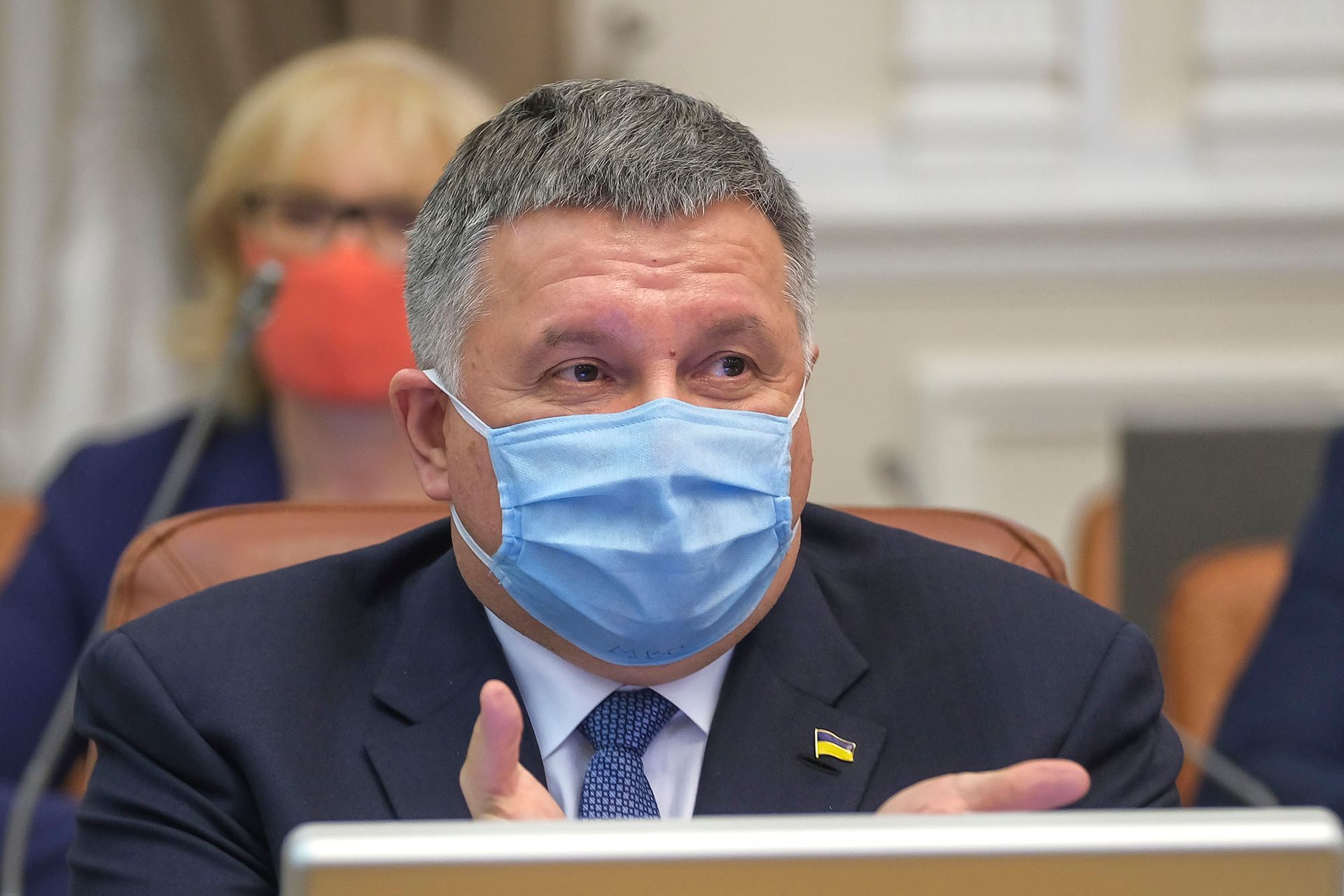 Humanitarian Aid as a Tool of Diplomacy

Studying the experience of Italian colleagues is not the only goal that Ukrainian medics have gone to Italy for. It is also a way of showing solidarity with a country of great importance within the E.U. and NATO.

“It was Italy that became one of the first countries in Europe to invite our children affected by the Chernobyl disaster for free recreation. And, by the way, it remains the only state in the E.U. that continues this important practice,” said the ambassador.

Perelygin also noted that many Ukrainians live in Italy – according to some estimates, around 400,000 – and all of them receive medical care there for free, regardless of whether they reside legally in the country.

Since the beginning of the pandemic, a number of countries have given their aid to Italy – not only wealthy nations like Germany or the United States but also Cuba and Albania which have sent several dozen doctors.

However, most attention has attracted support from Russia which arranged a PR operation in Italy with footage in Italian and Russian media of the two dozen military trucks with Russian flags that brought military doctors and equipment from Rome to Bergamo. Diplomats interviewed by hromadske said that the Kremlin used this opportunity to reinforce in Italy the view that its true friend is Moscow, not Western countries, and increase the chances of lifting E.U. sanctions.

READ MORE: Russia's Humanitarian Aid to Italy: How Kremlin Uses the Coronavirus Pandemic to Cover up Its Special Operation

"Solidarity Will Overcome the Virus"

Ukraine's aid is quite logical and necessary, says an associate analyst at the New Europe Center Kateryna Zarembo.

"Italy is in crisis now, it has become Europe’s frontline in the fight against the coronavirus, being at the epicenter of media attention. So Italy looks very carefully at who is helping them and how,” Zarembo explained.

"If Ukraine did nothing at all for Italy, and would have demanded something after the epidemic is over – for example, supporting sanctions – then, of course, we would have much less reason to demand it."

According to Zarembo, international relations are similar to human relations. And Ukraine cannot only act as a seeker of foreign aid, but it should behave as it would like to be treated.

"The aid may be small, nominal. The question here is not to show scale, but to show: ‘We are right behind you’ – it is very important.” 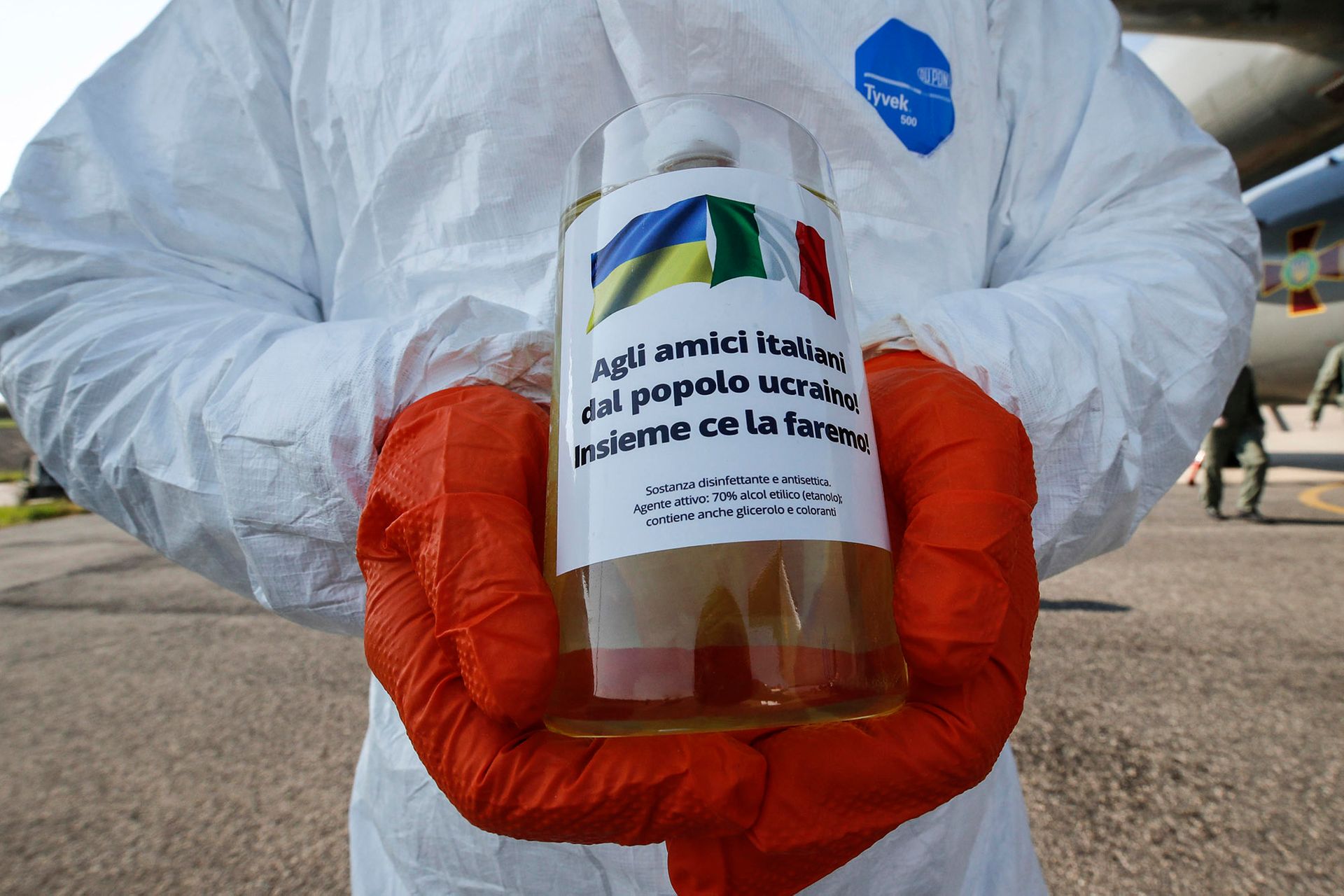 Italy is important for Ukraine for several reasons. First, it is one of the largest trading partners of Ukraine in the E.U. Secondly, after Brexit, Italy's role in the European Union has increased, and the country's stance, in particular, regarding Russia and the sanctions against it is important. Thirdly, Ukraine is interested in confronting the Russian influence in Italy, which is quite big and may become even bigger after the Russian “humanitarian operation”. Finally, Ukraine is hoping for a fair appeal in the case of Ukrainian National Guard soldier Vitaliy Markiv who was sentenced to 24 years in Italy on dubious charges.

"The humanitarian aid shows that Ukraine is a civilized European country that, regardless of its resources, is ready to help," says Zarembo. She believes that, by providing assistance to Italy now, Ukraine will be able to get help later when the incidence in our country reaches its peak.

Ukrainian aid to Italy has also prompted Italian politicians and the media to speak up about Ukraine again after a long break.

Foreign Minister Luigi di Maio, who met Ukrainian doctors at Pratica di Mare Airport near Rome (where planes with the Russian humanitarian aid landed two weeks earlier), said that "without this assistance, Italy would not have coped".

La Repubblica newspaper published a letter by Foreign Minister of Ukraine Dmytro Kuleba saying that in 1994, at the age of 13, he spent a summer in an Italian family and was rooting for Italy at the FIFA World Cup together with them.

The Ukrainian aid to Italy may not have amazed by its scale, but it wasn’t unnoticed in the country.