donate
Hromadske UAHromadske RU
AboutWhere to watchAuthors
Contacts
Ukraine
“In the back, lying on the chest of dead husband, still warm, asking him not to worry”
1114
Trending
900

EXCLUSIVE: The True Cost Of Remaining Ukrainian in Crimea
9274

Krasnopillia Cemetery in Dnipro. On both sides of the lane, there are crosses with the inscription “Unknown Hero”, one of them marking Serhiy Karnaukhov’s grave. On the cross, two flags flutter in the wind — the first is blue and yellow and the second is red and black.

Young widow Alina puts fresh flowers in a vase among plastic wreaths. Her hair is gathered with a thin lace headband, around her neck she wears her husband’s medallion, his wedding ring, and a flattened bullet that could have killed Serhiy back in 2019 — a sniper aimed at his head, but a thin crossbar in the middle of the window saved him — the bullet hit his arm. 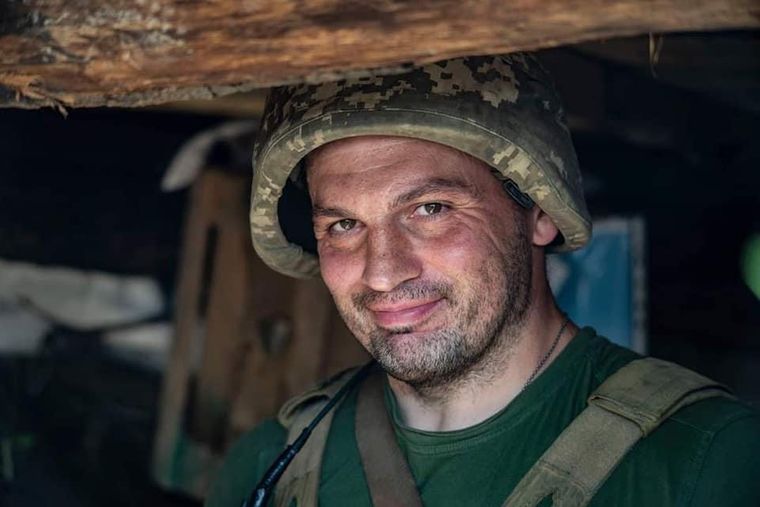 Unfortunately, in 2022, the Russian bullet caught up with Serhiy.

“Serhiy was in a bag with an inscription: “Unknown scout of the 93rd Separate Mechanized Brigade.” An identification procedure took place. They gave me his badge, ring, and bullet, and now I wear them,” says Alina.

The battalion commander informed the woman about the death of her beloved one. Alina recalls standing at night at the doorstep of a once-civilian hospital, re-qualified in a morgue, and telling the doctor that her husband was there. The medics checked some of their records and didn’t find him. And then the doctor with the “Black Angel” chevron took out the phone and showed the photo — it was Serhiy.

“Oleh, the driver who evacuates the dead, acted very humanely, he gave me some time to sit in the cold back of a truck with my husband’s body that was still warm. I hugged him, kissed him, and asked him not to worry because I was right there.”

Serhiy came under massive fire in the Izyum district near the village of Dibrivne together with a reconnaissance group. On May 27, Serhiy Karnaukhov — world champion in powerlifting, master of sports of international class — was fatally wounded in the head. He was 43 years old. 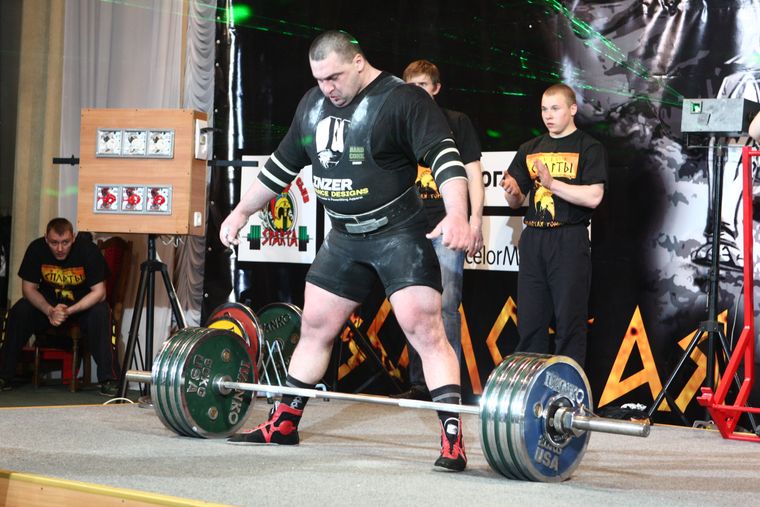 Serhiy Karnaukhov — a world champion in powerlifting, master of sports of international class

He witnessed his fellow soldiers being blown up

Serhiy realized the inevitability of war in the first days of March 2014. After the Maidan shootings and the appearance of the first “little green men” on the Crimean peninsula, he went to the military enlistment office in Dnipro, left his contact information there, and asked to contact him as soon as mobilization begins.

At that time, he had no experience of classic army service. He performed his compulsory military service and had his first contract in an athletic company — he represented the brigade and the country at sports competitions.

He received a summons on March 24, 2014. He was assigned to the 93rd Separate Mechanized Brigade. He joined the artillery right away, taking the position of a loader — a crew member of a self-propelled artillery installation. The war began for Serhiy when he was in the infantry. On May 25, Serhiy was already at his first checkpoint near Pokrovsk, and shortly after that, he engaged in his first battle.

“There were wheat fields near the checkpoint, some local guys came up saying that they needed to remove the bread, they would mow it early in the morning to save the equipment from shootings because the tank turbine and the combine harvester sound the same way. At four in the morning, to the sound of a working combine harvester, the locals showed the way to a separatist tank from Karlivka which shot this checkpoint,” says Alina.

The losses were heavy: 7 dead and 7 wounded. They defended the checkpoint, and artillery helped to repel the tank attack. Serhiy witnessed his fellow soldiers being blown up, he collected the remains of his commander in a bag. 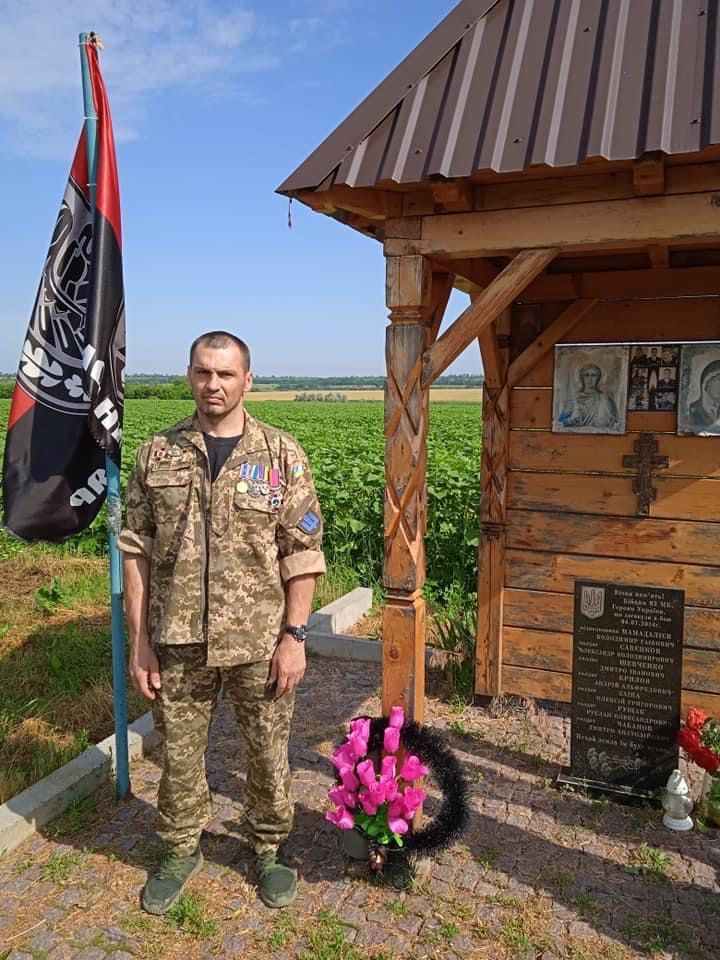 The losses were heavy: 7 dead and 7 wounded

After the battle at the 10th checkpoint, Serhiy returned to the artillery. He started as a loader, then, he became a gunner, and later — a gun commander, and he was holding this position during all the intense battles for the Donetsk airport.

In the first days of 2015, Serhiy joined the infantry again, because the artillery was supposed to be withdrawn, and he did not want to sit somewhere in the back streets. By hook or crook, he was transferred to an anti-tank platoon. He took part in the latest assault on the airport: grenade launcher and anti-tank platoons were sent to Pisky to cover the attack group from the side of Pisky.

“In 2016, he became a senior battery officer, and later — a battery commander. A double-hatting arrangement. After performing his duties as a senior battery officer, he would start on all the paperwork. Travel packages, records, and staff. A few hours of sleep before going on another mission. He served two tours of duty like that — in the Luhansk Oblast and near Mariupol,” says Alina.

Then, he joined the infantry again. Serhiy got a machine-gun platoon in the combat zone near Avdiivka. During a duel with a sniper, one of the shots broke a wooden handle, ricocheted — and the core of the bullet went through Serhiy’s left arm. The evacuation site was about a kilometer away by foot, and he had to pass the area that was exposed to the fire of the same sniper.

After being injured, Serhiy partially lost his ability to work. But after treatment and rehabilitation, he became a commander of a heavy machine gun platoon. Before that, he got married.

“There has been a reassessment of values. Everything that happened between us would have ended with his death, and he wanted to keep at least his name, his last name,” says Alina.

The couple met in the summer of 2015 near Donetsk. Alina was a volunteer — she was shipping aid from Pokrovsk to the front.

In 2016, Serhiy and his team were transferred to a new location — in the Luhansk region — and this was a test for their relationship.

“I wrote him a lot of letters, describing to him my day, how I woke up. What I thought, what I felt, how I missed him, what I saw when I drove down the road, what our meeting would be like, what words I would say to him, how I would hug him, kiss him. I was telling on paper what had already happened. What happens to us is one thing, but at that moment we also feel something that we don’t say, so I was telling him these things in the letters.” 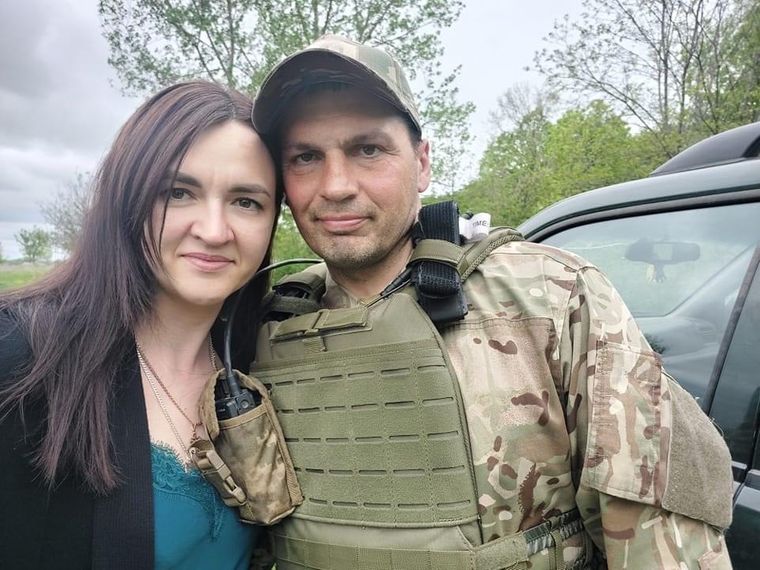 Every day, Alina’s alarm clock was set for three in the morning — the time when her beloved would call.

“It was dark in the place where he was, I couldn’t see him, but he could see me. So, every day, at three in the morning, I was getting ready as if I was going on a date. I had beautiful makeup, nice styling, I was wearing beautiful underwear,” says Alina.

Now, she would go to see Serhiy once in two weeks. Sometimes, everything was postponed because of the aggravation at the front.

“When I was going to Severodonetsk, I could feel that at that meeting I would hear the words I was waiting for so much. Because I was the first to tell him that I loved him, and I did it on the phone. I told him that if I didn’t say it, and something happened to him, I wouldn’t forgive myself for it. I really wanted to say this, because this is a war. I remember that I was driving home and at the train station I took a magnet from this city as a souvenir of the confession.”

She recalls the celebration of the New Year in 2017. In the village of Popasne (Novoaydarivsk District of the Luhansk Oblast — ed.) in a semi-abandoned house three minutes from the place of artillery deployment.

“I went there by bus, packed a whole suitcase of things, baked a chicken, a festive cake, I had a generous New Year’s table in a suitcase. The guys met me, put me in a Kamaz truck, and met me like a general’s wife!”

When Serhiy was transferred to the Mariupol direction, it was no longer possible to come there and stay overnight. Alina would leave at four in the morning, spend time with Serhiy, and return home in the evening.

“It’s heartwarming to know that this happened in my life, though it might not have. If this story, this love didn’t happen to me. Maybe it wouldn’t hurt, because I wouldn’t know it is supposed to be like this. I am lucky that I had this love, this person in my life. An example of a real man who means what he says, who does not compromise his principles, a strong-willed man who is always ahead,” says Alina.

“My house was taken away, and my husband was killed, but I will not give away my memories”

In 2020, Serhiy resigned from the Armed Forces of Ukraine. They bought an apartment in Berdyansk. First, he got a job as a manager at a local meat processing plant. After half a year, he was promoted to a senior position. After the first shellings in Berdyansk, the family left for Dnipro, from there Serhiy went to his unit — his native 93rd unit. This time, he was entrusted with the management of the reconnaissance unit. He worked together with the division on the border of Kharkiv and Sumy Oblasts, in the area of Balakliya and Izyum.

“I try to keep the memory of what our bed smells like. In our house, everything is in its place, even the unwashed dishes in the sink, but we are not there, Serhiy will never be there again. Maybe it’s a good thing I can’t get into our apartment because I can’t stand seeing things he won’t touch anymore,” says Alina.

Some of the most valuable things we left in the occupied territory are Serhiy’s military awards, medals, and cups. Alina did everything she could to ensure that a trusted person secretly took out Serhiy’s ceremonial jacket with awards.

“I couldn’t let the occupiers get them. My house was taken away, and my husband was killed, but I will not give away my memories” 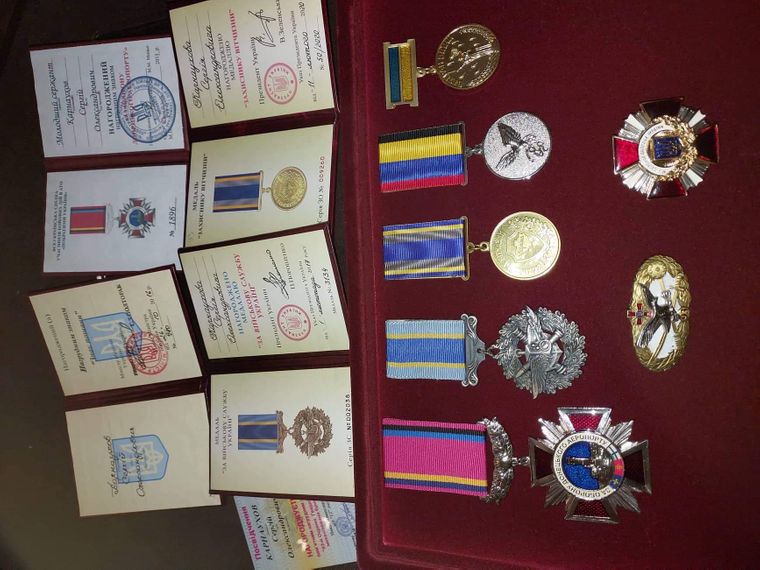