donate
Hromadske UAHromadske RU
AboutWhere to watchAuthors
Contacts
Ukraine
“I’m not afraid of the dead, I’m afraid of the living”: the story of a paramedic on the front line
796
Trending
1580

Will Ukraine Get Its Own Unified Orthodox Church?
8220

Oleksiy Kushnier, paramedic of the 14th Brigade of the Armed Forces of Ukraine named after Prince Roman The Great Photo: Kolyan Pastyko / hromadske

Every day, half a thousand Ukrainian soldiers are injured on the front line, President Zelensky said. The most fierce fighting is currently taking place in the east, especially in the Severodonetsk–Popasna–Bakhmut triangle. The 14th Brigade of the Armed Forces of Ukraine named after Prince Roman the Great is somewhere there.

hromadske has had a conversation with the brigade’s paramedic Oleksiy Kushnier on the positions in one of the Donbas forests. His team pulled out of the battlefield and helped more than 150 wounded fellow soldiers.

“Killing another russki is just a job”

A tall man wearing camouflage clothing leads us along forest paths. It is easy to lose sight of him: he merges with the greenery. Athletic build, thick beard, tattoos in the shape of trees and patterns on his arms and a trident on his neck.

Oleksiy Kushnier, commander of the Azov platoon in 2014-2015, could easily become a star of some blockbuster — handsome, charismatic, with a Hollywood smile. Instead, he has already been on the medical front for three months.

With the outbreak of a full-scale war, Oleksiy decided that now his mission was not to kill enemies, as it was at the beginning of the russian invasion in 2014, but to save the lives of Ukrainian soldiers.

“If I have the opportunity to pull the trigger and kill another russki, I will do it. But it won’t give me any pleasure. It’s just a job. It’s like coming to a barracks where a bunch of men live and there’s only one toilet, but there is shit all over it, and washing that toilet. You can live in shit, or you can remove it from your life. On February 24, when Lutsk airfield was hit (it was 6 am), so at 8 am I was already at the military enlistment office, and on February 26, I was already at war in the Zhytomyr and Kyiv oblasts. After the Kyiv oblast, we were in the Mykolaiv-Kherson oblast, later — in the Izyum direction. And now we’re here. We are having a work and travel program.”

When Oleksiy says: “we are having”— he means himself, doctor Taras and driver Maksym, whom he calls “my Sancho Panza”. They have one call sign for the three of them — “Citramon”.

“I am just Lyokha— so he says about himself and jokes even where, it would seem, there is no place for jokes — If I don’t die, they won’t call a chocolate bar after me, and if I do, they may, but I won’t care anymore. Dying in war is not the worst way to die.” 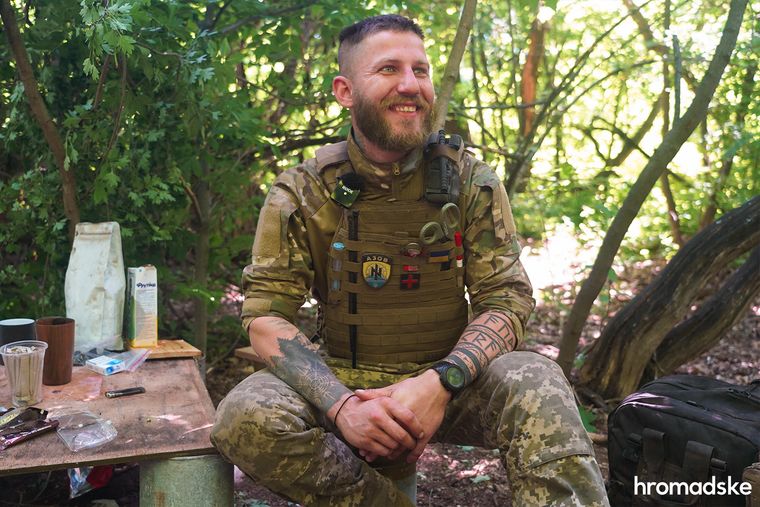 Oleksiy Kushnier, paramedic of the 14th Brigade of the Armed Forces of Ukraine named after Prince Roman The Great

The man smiles when talks about how he easily falls asleep in the car from which the bodies of the dead were just unloaded, about how he had to sleep in the bags in which the corpses are packed — because it was too cold in the field and the only “blanket” was those black bags.

Then he adds: “They were new, not used”. And laughs.

“The car can be loaded with the dead. After we took them to the hospital, we wash the car and only then we come back. There are two aspects here: if you just leave it, it will smell bad, and the second is that the wounded should not see anything, so that they think that no one was there before them. And I can wash the car from the dead or wounded, just put karemats there and sleep in the car. I’m not afraid of the dead, I’m afraid of the living.”

It seems that Oleksiy’s smile is his armor. He saw too many deaths and injuries, and very often he had to make a choice: who should be provided with medical care first.

“When there are a lot of wounded people, we work with those who will die without our help, and not with those with whom we are friends, who show better dynamics and are easier to work with. We are medics, we are “neutral beings”. We’re doing our job. We are very stupid people.

Some soldiers have zeal at war — when you’re in a battle and you can’t see anything. For us, the zeal at war is when there is a person who has suffered — we do not hear any explosions or that something is flying, we act. And then we arrive and just think: “f*ck”... We were evacuating the guys without arms, without legs, and they were alive. The maximum number of injured people that we packed in the car was eight, and two more were stretcher cases.”

“When a unit has diarrhea, they will not be able to perform their functions”

Oleksiy shows us his medical backpacks. One has everything for emergency medicine (that is, what saves lives on the battlefield: garrots and hemostatics). In another backpack there is everything for everyday help, that people need even in peacetime.

“There is a misconception that doctors on the front line see a lot of blood. In fact, 70% of work is working with physical illnesses. It’s diarrhea, runny nose. We have huge metal machines that do death to enemies, but when a unit has diarrhea, they will not be able to perform the functions, entrusted to them by the state.”

Then, the nurse unfolds the black folder. There are about fifty ampoules, mostly different kinds of painkillers. Once this folder served as a place for perfume bottles.

“We are the only people in the unit who have legal drugs. If we wanted to (but we don’t), we could be in a good mood all the time until the end of the war” — Oleksiy keeps joking. 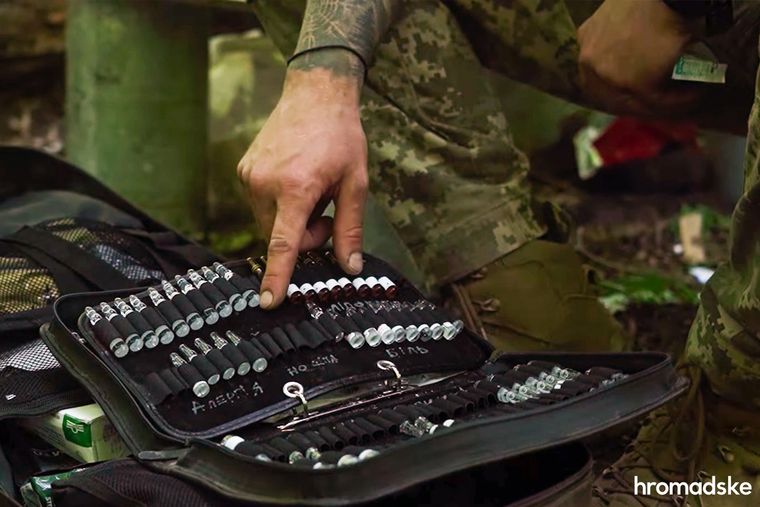 “I haven’t slept in a bed for over three months”

We notice a package suspended from a branch, with a hose sticking out of it. Oleksiy explains that this is their shower, and says: in war, the experience of tourism is no less useful than the skills of a shooter. Because either in the field or in the forest, you need to be able to arrange everything for life.

In fact, the conditions of life of his medical team consist of this shower, trenches dug in the ground where you can spend the night and hide from shelling, and also a burner on which food is cooked and water is boiled for coffee.

“I haven’t slept in a bed for over three months Soon I will look at the toilet like a russki, as if it is something unreal.”

There is a medical stretcher with a bright purple sleeping bag next to the trenches. This bag, according to Oleksiy, was high in the mountains once, and now it is useful here. The nurse turns the stretcher over, shows holes in them.

“We were evacuating a wounded man, a mine exploded near the car and a stretcher was pierced by shrapnel. A wounded guy was already lying on a stretcher, and a doctor was already working near him. The fragment passed on the stretcher, the wounded man fell down, but, fortunately, everyone survived.”

Ukrainian flag, Belarusian father, and prayer on a bulletproof vest

“My father is Belarusian. I was born in Belarus and lived there for 5 years. My mother is Ukrainian. I support the idea that you don’t born Ukrainian, you become one. My father is also mobilized, he is fighting in the 54th Brigade”.

Oleksiy pulls out a blue and yellow flag from his breast pocket, folded into a small square, and unfolds it. He says he took it from home and always carries it with him. As well as the belief that being at the front is not a problem, but very much the opposite.

“We were lucky. We are now taking revenge for all the atrocities that the russian federation has inflicted to Ukraine for centuries.”

A prayer is written on his bulletproof vest:

“Ukraine, Holy Mother of Heroes. Come to my heart. So that my faith may be granite, so that I may boldly go into battle, let me not know fear, nor hesitation. Strengthen my spirit and my will, and stay in my heart. And I will drown in you and live in you forever. Eternal Ukraine. Holy, mighty and conciliar.”

The man says: Who knows, maybe it was this prayer together with the flag that saved him when there seemed to be no chance — despite the fact that he himself is not very religious and does not really like it when someone says “We are praying for you”. He explains that everyone has their own god, and it is unlikely that a Muslim needs someone to pray for him to Jesus.

He also advises not to wish the soldiers a quick return home, because a quick return occurs only in three cases: death, injury or desertion, the fourth is not given. 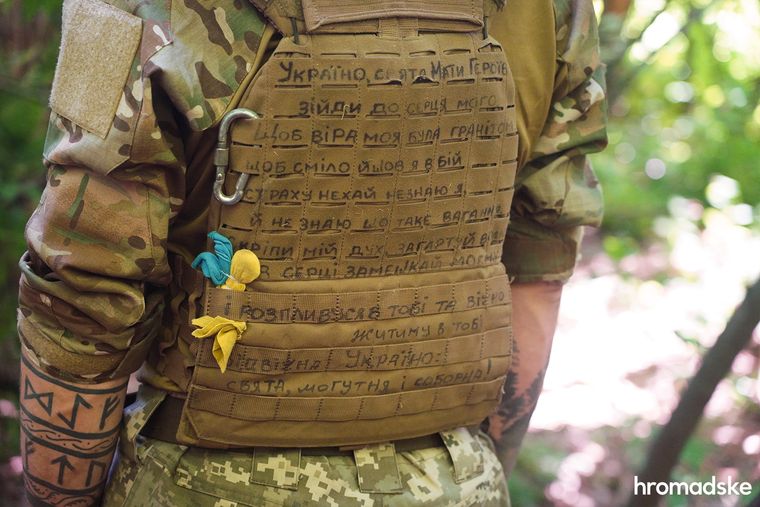 “We were hit from everything you can imagine, maybe except of ships”

“There were days when we would sit in the evening, drink coffee and I would say: Taras, we were hit from everything you can imagine, maybe except of ships. Missiles landed, self-propelled guns, tanks, helicopters, planes also flew, something was thrown, and you think — well, okay.”

Oleksiy’s wife is waiting for him at home, in Lutsk. She has her own front in this war: volunteering. The man says that for Olya, living with him means knowing what to do in case of injury, death or disappearing. They discussed the procedure with his wife, but Oleksiy plans to return home when Ukraine wins. And then — go on a road trip to the Mediterranean, finish the renovation of their house. You can also get a master’s degree in law in addition to your first medical education. Even now, in the trenches, when there is an opportunity, he listens to lectures online.

“I have big plans for after the victory. My type of activity is tourism, mountains, I plan to continue this, expand it, after the victory we will have to make efforts to rebuild the state.”

We finish our front-line coffee and drive on. And Lyosha and his “Citramon” remain where you need to save lives every day.