Ex-MP turned collaborator found to store over 6,000 unique artifacts from Crimea worth millions of dollars
1996

“I’m the Change”: What It’s Like to Be Feminist in Moldova, Armenia, Ukraine, and Russia
31985

Vitaliy Taranin, son of Rollana Bondarenko, together with his wife Alla Taranina Photo: provided to hromadske

- I'm so worried. You have to persevere. You are strong.

- Hold tight, the whole of Ukraine is fighting.

March 2022. Veteran of the Azov Regiment Rollana Bondarenko had such conversations and correspondence for weeks with her son Vitaliy and daughter-in-law Alla, defenders of Mariupol. 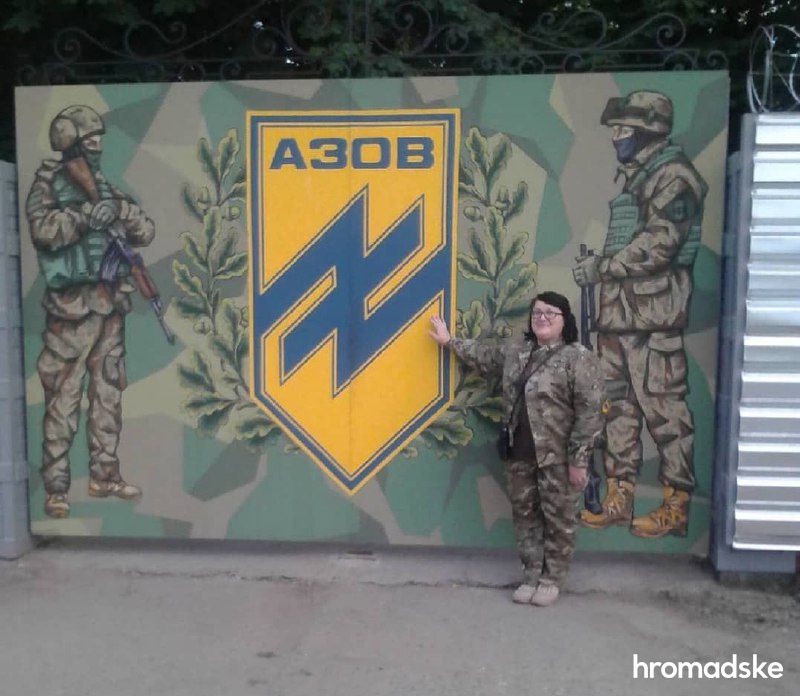 Rollana Bondarenko, a veteran of the Azov Regiment, 2014

"Lovebirds joined at the hip"

On June 15, 2014, an old Lada Samara 2108 left Krasnohorivka in the Donetsk Oblast. Vitaliy Taranin was behind the wheel. There are two women in the car: his mother and his girlfriend.

"My son said that we will not stay there and he will not work for this government, for someone unknown — some drug addicts, alcoholics, we all knew them. And there were many pro-Russian provocateurs. We pondered where to go. We thought about Azov. It was scary — a military unit, but my children, my son and his girlfriend, thought and decided that we would go to help."

They hoped that they would be in Mariupol for a short time — they would volunteer for one or two months, by the new year the war would end and they would return to their former lives. Instead, Krasnohorivka was occupied, returning home was off the cards.

In Azov, the couple started working in the kitchen. Later they officially registered for the service. Vitaly became head of finance, while Alla was a clerk. Whilst in the regiment they got married, and in Mariupol they had a son. And on February 24, 2022, both went to defend their Motherland.

"She decided to follow my son. She loved him very much. They are, you know, lovebirds — together all the time." 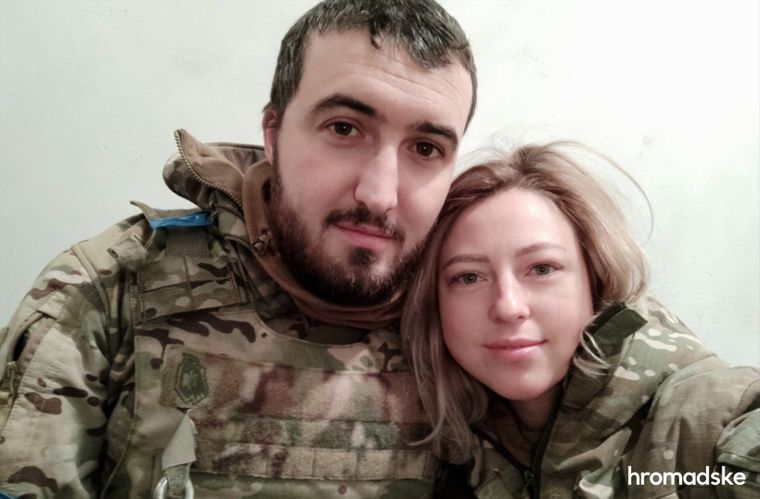 Vitaliy and Alla Taranina, fighters of the Azov Regiment

"The plane bombed us today, we shot it down"

Every night and every morning Rollana was waiting for messages from her children. They were brief: "I'm on duty", "Mom, I'm here".

Or much longer: "There is so much to tell, but I can not, details later. The plane bombed us today, we shot it down. Our fighting spirit here is record high. We’re ready to rip them apart."

Rollana told her son that she was expecting a granddaughter. And he assured that they had already agreed with Allochka: as soon as they leave Azovstal, they will have many children.

On March 4, the mother wrote to her son and received a reply:

-Are you surrounded? What's up?

Then Vitaliy didn't get in touch for a whole week. Rollana was worried, endlessly writing, but to no avail.

"I did not know that my son was wounded, because this is a war and he is an officer, and this is a military secret. Then he wrote, 'Mom, I'm here'."

Vitaly assured that nothing terrible had happened to him — he was recovering.

Rollana rereads messages from her son over and over again, which she learned almost by heart: "We were bombarded with grenades. We knocked out a tank. The commander praised us so much for not giving up our positions. I was pulled from the battlefield by my friend and brother-in-arms Kit. He broke the fence to save me. I'm getting better. Wounds are healing. I am alive". 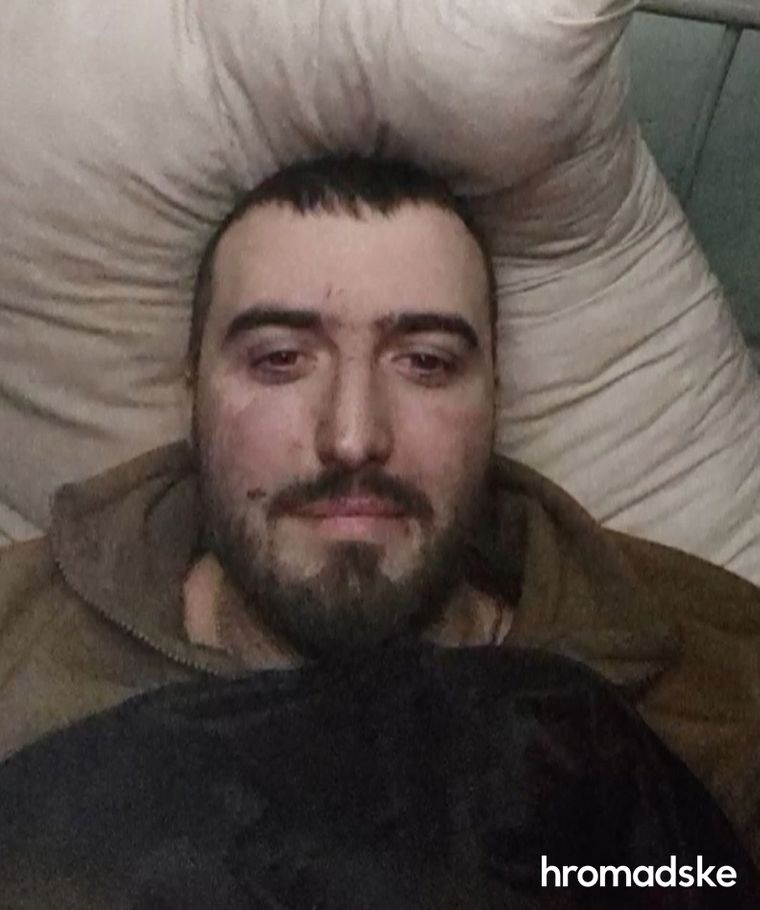 "Then it emerged that they were blocked up"

Vitaly was "repaired" in the improvised bunker hospital at Azovstal. Alla was performing combat missions at the time and had not seen her husband for a month and a half. When I was finally allowed to get back to the command, I went to see him. I went into the "ward". Vitaliy was sleeping. When he woke up, he couldn't believe it — his wife was sitting next to him, crying. He started wiping away the tears.

"I had tears of happiness and he wiped them away from me. He was lying and I was sitting next to him. I could not believe that I got to see him.

Due to his injury, he could not sit and stand much. I gathered his belongings and began to heat the water to wash and change his clothes.

He was already clean, lying in fresh clothes and began to tell the story of how he was on a combat mission. The story was very interesting. It spanned two or three hours.

We were lying together, hugging. I only now understand how little we hugged and kissed. It was time to leave. I started to get myself ready: armor, helmet, machine gun. Shelling was underway. And he asked me to stay, as he was very worried about me. And now I understand that if I had stayed, I could have died with him.

Everyone who slept next to him was offline on Telegram. Others appeared, I wrote, they read my messages but did not answer. I prayed. Then it became known that they were blocked up. Three days passed and one brother-in-arms wrote to me: "Darling, he's gone, stay strong."

(From the diary of Alla Taranina). 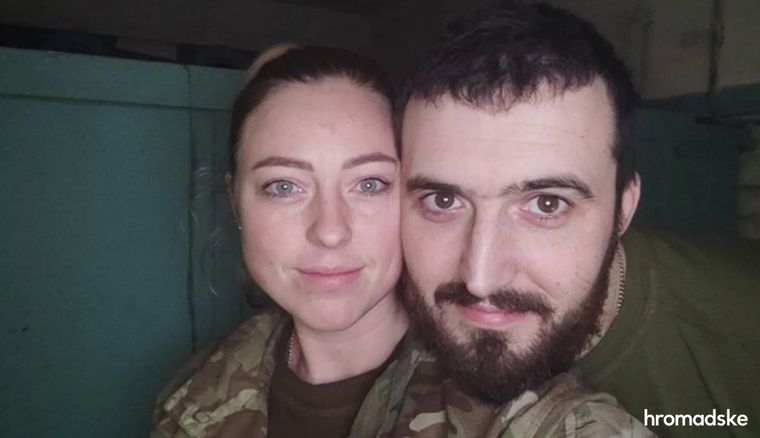 Vitaliy and Alla Taranina, fighters of the Azov Regiment

Rollana Bondarenko was called on April 17. A voice on the other side tactfully asked, "Where are you now? Who is next to you?"

But she already knew what they were calling about. "I say, ‘Tell me, please, did he suffer a lot?' They said no, it's a bomb, an explosion. And that's all".

At that moment, her heart contracted like a ring around Azovstal. Somewhere there was her son's body and somewhere there her daughter-in-law Alla continued to serve. Already as a widow.

On May 8, the Russians dropped another air bomb on Azovstal. Four floors of the bunker in which Alla was, collapsed. On the 24th day after Vitaliy's death, she died… Real lovebirds.

"Not only did Putin take my children, he killed them, but now he has killed all my friends and all the friends of my children — my son and daughter-in-law. And continues to do so. And my life has turned into… god knows what. Hell is not the word." Rollana Bondarenko holds back the tears.

She needs strength. Because she has a grandson left. And Azov, which she calls her family.

Today she will still have the opportunity to burst into tears — Vitaliy's best friend is to visit. He calls her mother.

"Azov is all I have in my life. I write to them — every morning, every day. I carefully choose words for all of them or I don't. I write what I feel in my heart — a bunch of smiley faces and a lot of hope. And that they will be freed. I do not lose hope that I will see them. I will write on Telegram again to them, alive — how much I love them, how I’m waiting for them. To the girls too. They do not sleep. They do not sleep. I sit and pray to Allah, God, that they teach me how to write... so as not to hurt.