donate
Hromadske UAHromadske RU
AboutWhere to watchAuthors
Contacts
War
“I heard Ukrainian and realized that we are finally free”: Vysokopillia after the occupation
681
Trending
329

“Our Kids”: Crimean Resistance to Political Arrests In Numbers
8831

Alla, a resident of Vysokopillia Photo: Kseniia Savoskina / hromadske
On our way to Vysokopillia, in Kherson Oblast, mobile reception disappears. Maps won’t load, so the navigator doesn’t show the names of localities. From the car window, we see more and more burned-out houses. We are among the first journalists allowed to enter this village after its de-occupation. The Russians stayed in Vysokopillia for half a year.

“You won’t hear your mine”

We stop under the trees near one of the surviving houses. There aren’t many of them in Vysokopillia. However, almost every yard has a burnt-out car with the letter Z. Alla comes out of the house. She stayed in the village during the entire period of occupation — she saw the Russian military robbing shops and hospitals. She couldn’t go to the territory controlled by Ukraine, because she didn’t want to leave her bedridden father.

“The Occupiers came to us in March, three days later, we had no gas. Our local guys repaired the electricity under fire and then said that they could no longer withstand it. Since March, we have had no electricity or gas, and the stores have also stopped working,” the woman says.

Alla talks about life under occupation to the sound of explosions, then the shells whistle right over our heads, feels like my stomach is in knots.

She says: “It fell over there, somewhere on the next street. Don’t worry, you won’t hear your mine”.

During these six months, local residents have learned to identify by sound an approximate place where a mine can land. If the whistle ends quickly, says Alla, the shell will land somewhere far away, and if it slows down above your head, the mine will land nearby: “When the glass trembles, it’s still about half a kilometer away from us, and when the house trembles, it is 200-300 meters away.”

Alla’s eyes light up, and her voice becomes more sonorous when we ask about the day when the Ukrainian military entered Vysokopillia: “I saw them from afar, they were walking down my street, and I couldn’t believe it was them. I thought maybe the occupiers changed into their clothes because we were warned that they could pretend to be our defenders. But it was not the case — I heard Ukrainian and realized that we were finally free.”

“They kicked me out of my house”

Before the full-scale war, more than 4 thousand people lived in Vysokopillia. Now there are about 300 residents. People are gradually starting to return to the village. Some have already moved back to their half-ruined houses, but most of them go to Vysokopillia every day from Kryvyi Rih and Zelenodolsk to work in their destroyed yards.

Volodymyr opens the gate riddled with bullets and shrapnel. He gives a tour: “This is the household I used to have. This is my equipment. I’ve been walking here before, don’t be afraid.” 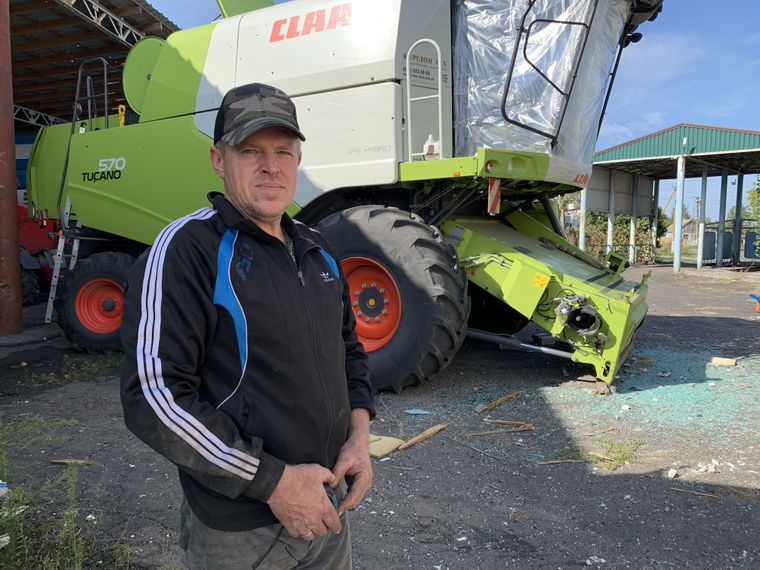 Volodymyr, a resident of Vysokopillia

A pack of sand-colored puppies happily pounces on Volodymyr. They are the only living creatures who stayed in this yard all the time during the Russian occupation, it is clear that they missed the owner. He sent his family abroad and has not seen them for six months. And he lives in Zelenodolsk. After de-occupation, he comes to Vysokopillia every day. He wants to restore the house so that his family has somewhere to return to.

“I lived under occupation for two months, and then I left. The Russians became so impudent that I couldn’t tolerate them anymore. They took the cattle, and the household, and ate everything. They kicked me out of my house. I lived with my fellow villagers, and then a shell landed in their yard. I decided to leave,” says Volodymyr.

In Volodymyr’s yard, there are burned Zhiguli with the inscription “Siberia” and with the Z letters in red and white — seems like the occupiers were practicing their writing skills. On the white house, there is a Z as well, only in yellow. The house is a mess after the Russians: ready-to-eat meals, helmets, torn boots, and feces. Russian newspapers are scattered on the floor with headlines: “We wish you to win, Russia!”, “We are proud of you” and “Thank you for protecting our world!” Volodymyr looks at this and shrugs.

“I returned to my native land. Even though it’s in such a state, it’s mine. Mine, you know? I spent four months in Kryvyi Rih. I couldn’t get used to city life, just couldn’t stay there. I wanted to come here so much”, — tears well up in his eyes. “There is no place like your own land.” 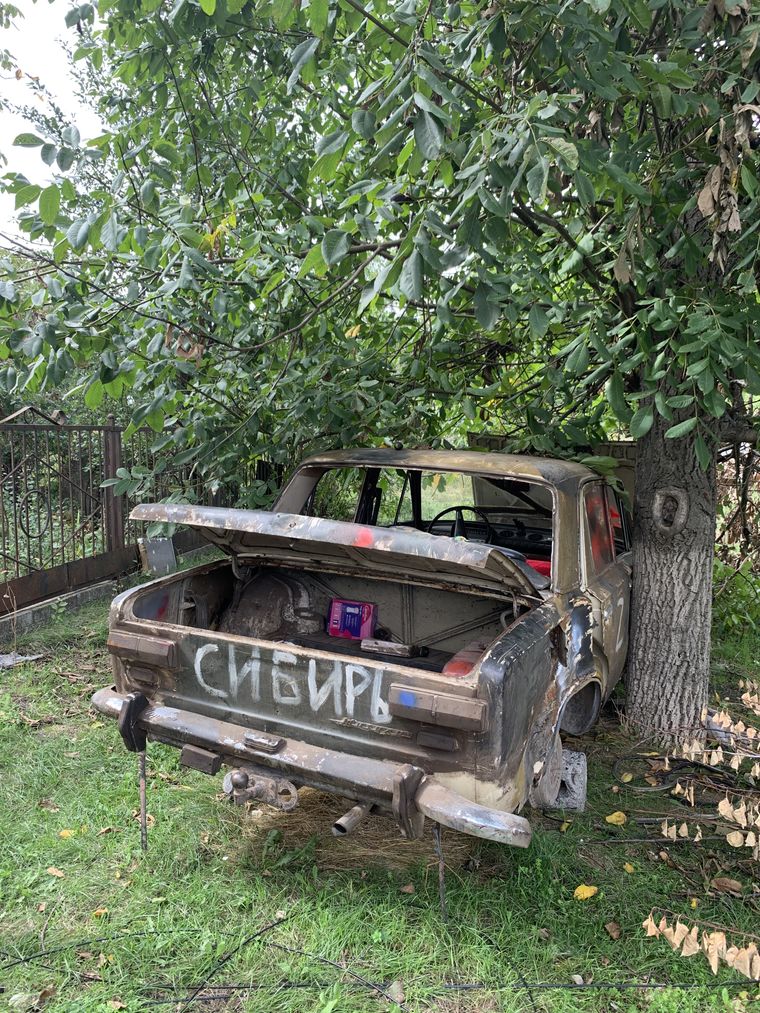 In Volodymyr’s yard, there are burned Zhiguli with the inscription “Siberia”

A young man throws fragments of broken slate from the roof of the house. Instead of a roof, there is a large hole. We climb up the roof to him. The man’s name is Oleksandr. He clears the attic wearing his work gloves.

He explains: “The shell hit the beam. And the mine itself, a part of the mine flew into the house through the roof. The ceilings fell everywhere”.

Oleksandr does not even dream of a quick repair, he wants to at least cover it with oilcloth so that the water does not get inside.

His mother, Mariia Oleksandrivna, is busy in the courtyard. They all temporarily live in Kryvyi Rih, but every day they come home to remove the traces of Russians. The woman says that, in addition to the house, the occupiers damaged and looted their store. The family was selling household appliances.

We get in the car and Oleksandr takes us to show us how the occupiers managed their store. They called the road from the house to the shop a battlefield road. Mariia Oleksandrivna explains why driving here was life-threatening. There is a field on both sides, so there is nowhere to hide if something happens. 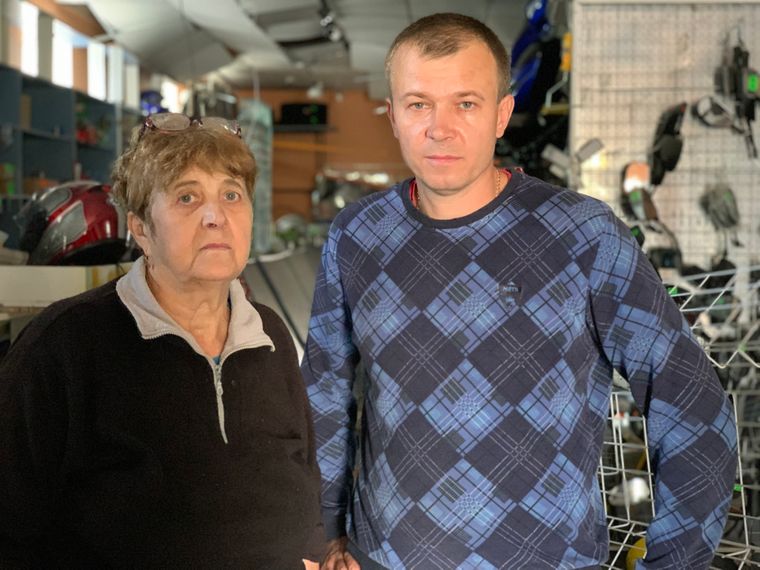 Mariia and her son Oleksandr

We stop near a blue building with a sign “Fisherman’s paradise”. There’s not much left of a paradise. There is a large hole in the door where the lock should be. The Russians fired to open the store — explains Oleksandr. We go inside.

“There were household appliances, different punchers, grinders, drills, gas mowers, chainsaws, there were fishing gear, fishing rods, everything for fishing,” the owner recalls.

Now there is a mess. The occupiers took out literally everything — to the last cog. They left only the Z letters drawn in white and red.

“We built it ourselves, we worked for 8 years. I made everything myself — I installed the flooring, and sheathed the house from the outside. And now there’s nothing here. But we will repair everything. This is our home. We’ll come back and live here,” says Oleksandr as we leave.

The curfew in Vysokopillia starts at 14 o’clock, so locals arrive early in the morning and try to leave the village before lunch. It is dangerous to stay here overnight — the Russians continue artillery shellings of their homes.

During our stay in the village, it was hit three times. One of these hits made us fall to the ground. Meanwhile, Oleksandr was continuing to repair the roof of his house.