donate
Hromadske UAHromadske RU
AboutWhere to watchAuthors
Contacts
Ukraine
“He never wanted to be ordinary.” A story of an “intellectual” from Azov
704
Trending
4091

Missile strikes on Dnipro and Kramatorsk, shelling of Dnipropetrovsk Oblast and Mykolaiv: the highlights of today
2731

“Intellectual” — that’s how everyone called Dmytro Hubariev in the Azov Regiment. It is quite a justified call sign for a Faculty of Philosophy graduate, even though he chose the front to work at. Dmytro’s thinking was well structured, so he expressed his thoughts clearly and logically.

He drew wisdom and knowledge from life and books. They are still on the shelf of his small room in Kyiv. “Sapiens”, “Behind the Scenes of the Future” by Yuval Noah Harari, “The Lucifer Effect" by Philip Zimbardo, “The Decameron” by Giovanni Boccaccio, “The Ancient History of Ukraine” by Leonid Zalizniak, “Wisdom is eternal. Aphorisms of ancient Ukrainian thinkers XI ‐ beg. XIX century”, books about wooden carved crosses, the history of Zaporozhian Sich, Ukrainian villages, Vyshyvanka ornaments, and many others.

Five of them have bookmarks. Dmytro’s fellow soldiers from the regiment handed these books to his parents after his death. 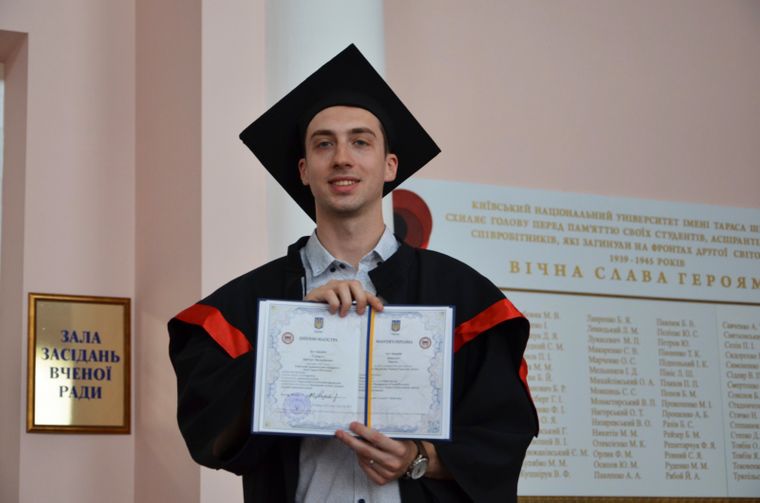 Living by the kalos kagathos principle

Dmytro was born in Kyiv and graduated from a gymnasium with advanced study of foreign languages. He practiced wrestling, kickboxing, combat sambo, and jiu-jitsu.

“He liked sports where you can prove yourself, where there is fortitude and serious physical training,” says his father Valerii Illarionovych.

During his physical education classes, he could easily beat his teacher at checkers, and the teacher was pretty angry.

He had no bad habits. He loved music and nature and went to the mountains. Last fall, he set his own route through the Ukrainian Carpathians — just like that, alone with a backpack on the train to Volovets.

“He loved to feel all the greatness of nature himself. Not on TV, but with his own eyes. In the Carpathians, he just walked through the mountains and valleys, communicated with the locals, tasted local food, and was interested in the history of the region,” recalls Valerii Illarionovych.

Dima was fond of the ideas of the Maidan and in 2014-15 told his friend Stepan Katuna that he wanted to go to war.

“He was a true patriot. The war has been going on for so long, for 8 years, but during this time it disappeared from the media space. All of us had an impression that we were not in any danger, and Dmytro understood the danger even then, his friend recalls. It might not always be obvious to our parents, but it is already obvious to our generation that in our entire history, we have never seen anything good from Russia. Since 2014, Dima thought it was unfair: our territories are being encroached on! Many people turned a blind eye to this, but not Dmytro.”

But at that time, he didn’t join the army. Life went on as usual. In his spare time, he played keyboards, the flute, drums, harmonica, and guitar. When he got accepted to the university, his father wanted to give his son a valuable gift. Dmytro asked for a high-quality electric guitar, and not some gadget. He could easily play classic rock music or modern hits on it.

Dmytro’s friend Stepan says that music played an important role in Dmytro’s life, except maybe for the last two years — during that period it was rather some sports, books, work... Dmytro worked hard on himself and believed that a person should adhere to the kalos kagathos principle, like in Ancient Greece — to be both physically and mentally fit. He lived by these rules.

Dmytro’s father says he was a very independent and responsible person — this is how he and his wife raised him. He never asked anyone for help, not even his dad.

“One should be responsible for his actions, should make balanced decisions, not to live at someone’s expense, but rely on his own thoughts and actions,” Valerii Illarionovych is proud that these were exactly the features that he saw in his son. He says that he cannot remember a time when his son disappointed or embarrassed him even a bit.

Dima liked to walk in Shevchenko Park, near his university, because he could see real Kyiv in it. He was proud to be a student of the Red building (ed. – Building of Taras Shevchenko National University of Kyiv). He used to say: “How lucky we are to study in the most beautiful place!” He was convinced that the environment and the surrounding aesthetics shape a person.

His parents have several degrees, but they did not impose any specialty on their son. Dmytro chose his own path. First, he enrolled in the Igor Sikorsky Kyiv Polytechnic Institute, studied there for half a year, passed the first series of exams well, but realized that he liked humanities more. Then, he passed the external independent testing one more time —better than the previous year — and became a student of the Faculty of Philosophy of the Taras Shevchenko National University of Kyiv. He liked history and religious studies and was interested in the cultural heritage of Ukraine. He could speak English, studied German from high school, and spoke Spanish.

“He never wanted to be ordinary. He didn’t want to drift along. He had to make his own decisions and overcome difficulties,” Valerii Illarionovych says about his son. 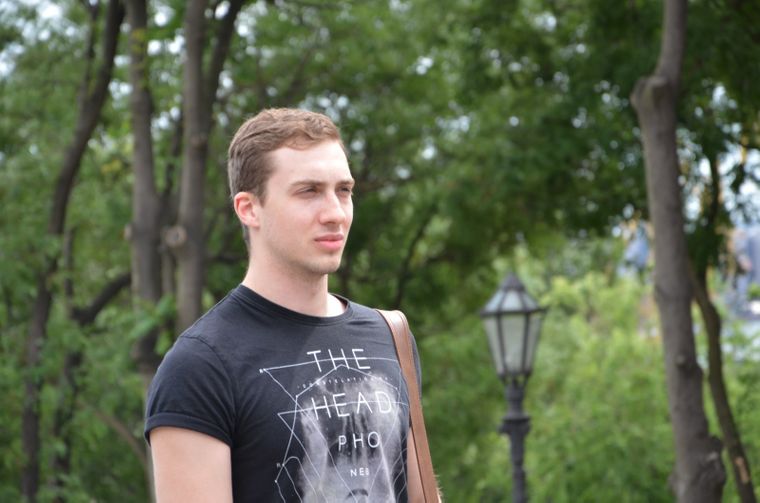 “He always needed the highest, the strongest, the heaviest things”

Shortly before the start of the large-scale Russian invasion, Dmytro joined the ranks of the Azov Regiment.

“Dima had a certificate of exemption from military service, but he really wanted to serve. In addition to his bad vision, he had problems with his back: once he threw it out in the gym, and it bothered him for the third or fourth year. And at the stage of selection to the regiment, he was the only one allowed to take painkillers to pass the forced march of 28 kilometers,” recalls Dmytro’s friend Stepan, who studied with him at the Faculty of Philosophy of the KNU.

In October 2021, after training camps in Kyiv, he was sent to Mariupol to a training center to complete the mandatory “Boot Camp” course. Dmytro passed the selection process and signed a three-year contract. He shared with a friend that in the fall of 2022, his unit will replace the special forces on the front line. Stepan was amazed because it was quite dangerous.

“That’s why I came here,” Dmytro replied then.

He truly found himself in Azov. He liked the regime, training on schedule, discipline, order, his military specialty, service by the sea…

“Do you remember, in winter we heard every day: there is going to be a war, there isn’t going to be a war…, says Stepan Katuna. However, Dima’s stories about the mood of the Azov people, and his posts on social networks reassured: the invader has no chance.”

Dmytro assured his friend that there are enough motivated people on the eastern line — brave, great soldiers who know how to defend what’s theirs. Therefore, on February 20, Stepan reassured his circle of friends that there is nothing to be afraid of because our Dima is in “Azov”!

One of Dmytro’s companions was a displaced person from Donetsk, so he chose the army for a reason — he set himself a goal to return his home. Not a single soldier of the regiment wanted a war.

“How can you want to fight? We are sane people. But there were no more arguments against Russia. We have no choice, we can’t show weakness,” Stepan Katuna retells the thoughts of Azov soldiers.

Dmytro’s father Valerii Illarionovych recalls that when someone would ask his son why exactly he chose Azov, he would answer: “Because there is a strong spirit here because the best ones are here.”

According to Dmytro, the military elite was there. You can feel your fellow soldier’s shoulder there. People understand what freedom and the struggle for it mean there.

“Fight even through military operations. He went to Azov even before a full-scale war. He knew that something may start... Before February 24, when the embassies began to evacuate, one of Dmytro’s companions advised him to leave: “It may be mayhem.” But Dima refused, and I know that he would never have agreed to leave Azov. It would be a great embarrassment for him — to leave his people when all of his fellow soldiers are there, defending Ukrainian land.”

Even before the full-scale war, Dmytro mastered the specialty of a paramedic, passed tests in tactical medicine very well, and at Azovstal, he provided first aid to the wounded. From there, he wrote to his friends that at first, he did not participate in battles — he was engaged in evacuating the wounded to the plant, making bandages, and helping surgeons.

“He knew how to stop the bleeding very quickly, how to do everything that was needed — every minute counts there. I don’t know how many people he helped, he didn’t give the numbers,” his father Valerii says.

When the marines joined forces with the Azov fighters at the plant, Dmytro was already going out on combat missions as an ordinary soldier. In particular, he replaced the grenade launcher after his death.

In the last photo that Dmytro sent to his parents, he was wearing glasses, with a dog next to him. He said that he had found a friend, another companion. On April 15, Dmytro Hubariev was fatally wounded during the battles for Azovstal and died on the same day. 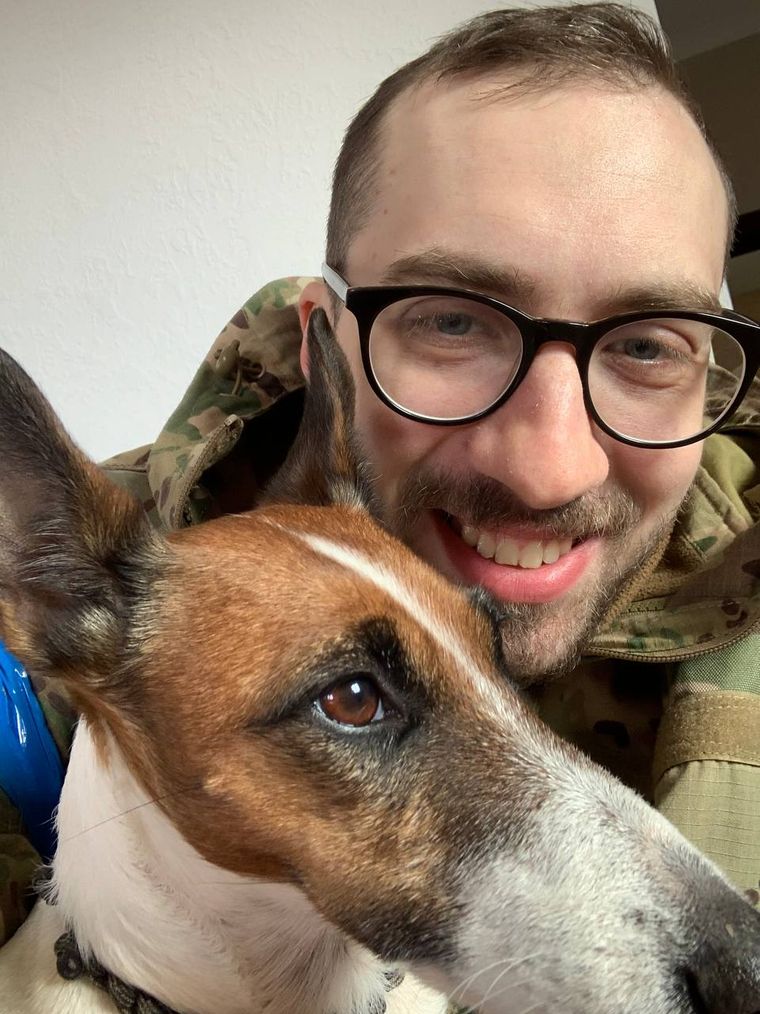 Last photo of Dmytro with a dog

Moved beyond the warrior’s mission

“Dima was born a warrior, he fulfilled and moved beyond his fateful mission. He was my best friend. If you become friends with someone as a student you stay friends forever. It hurts from the loss, of course, but pride for his great life and his feat overrides bitter feelings. I believe that I owe my life to him,” says his friend Stepan about Dmytro, adding that he was a person with a clear position, the right worldview, and remarkably brave.

The warrior was not afraid of death. Stepan recalls a quote from the ancient Greek philosopher Epicurus, which Hubariev made his motto: “As long as we exist, death is not here. And once it comes, we no longer exist.”

At the university where Dmytro studied, a lecture hall was created with the fallen graduate’s name engraved on a commemorative plate. Classmates and friends made a “Letter To Eternity” for Dmytro, where they added a chronology of messages that the guy wrote during the defense of Mariupol when he could get in touch. Also on May 17, Dmytro was posthumously awarded the Order “For Courage” of III degree by the Decree of the President of Ukraine.

Dmytro left his parents and his younger sister, who also studied at the Taras Shevchenko National University of Kyiv, and is now studying abroad. 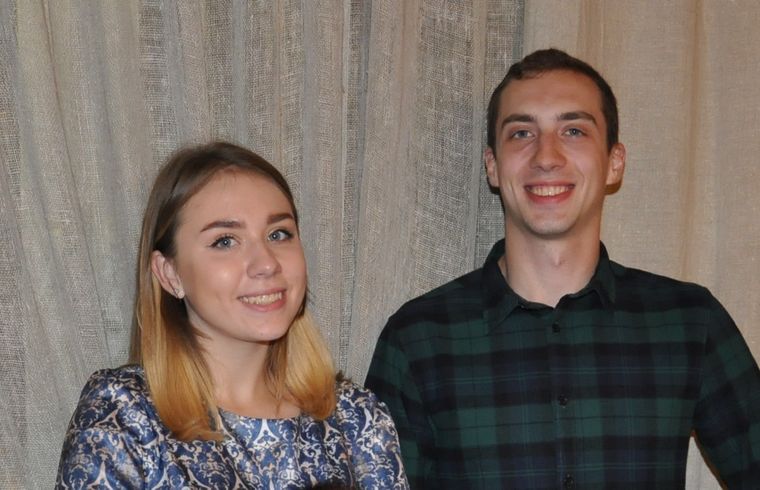 Dmytro and his sister

“Of course, I regret that there are many things that we haven’t said to each other, that we haven’t done together... I will remember him until my last breath, but when I am gone, perhaps young people from the university will pass by the lecture hall, read the text on the plate and remember Dmytro,” Valerii Hubariev said at the end of the conversation.

After the death of their son, the parents did not change anything in his room. Dmytro didn’t often pose for photos — he didn’t like “show-offs” — but Valerii Illarionovych has recently created a folder on his computer where he collects all the photos of his son.

This text is part of a special project “In a steel embrace” which collected 34 stories of different people brought together by Azovstal. All of these stories are about hope and struggle, and the desire for freedom and love for Ukraine.