The first Normandy format in over three years kicked off in Paris. Its aim is to help end the conflict in the Donbas. The Presidents of Ukraine, France, the Russian Federation, and the German Chancellor are meeting today. Hromadske journalists are working on-site, so you can be the first to find out all the latest developments in negotiations. All times are given in Central European Time (CET).

The press conference has concluded, and with that, our coverage. Thank you for tuning in!

Putin says that there is 'no alternative'  to the Minsk Agreements, while Zelenskyy points to the fact that many of his friends are internally displaced due to the conflict, and that the Trilateral Contact Group in Minsk should contain representatives from those who were internally displaced.

Putin, responding to the same question, starts by suggesting that gas prices could be lowered by 25% for the end-user. On the border, he emphasizes that Russia's position is the implementation of the Minsk Agreements, which he says allows for the return of Ukrainian control of the border the day after local elections are held.

Zelenskyy, responding to a question posed by Hromadske's Nataliya Gumenyuk asking about any preconditions for the next Normandy meeting, says that there 'is no homework', meaning that the next meeting will occur without preconditions. He also adds that he is resolute in ensuring that Ukraine regains control over its border prior to local elections being held in the Donbas. On the question of gas transit through Ukraine, where the current contract is set to end by the end of the year, Zelenskyy says that the negotiation process is unblocked and that further talks will be held.

Putin makes a strong emphasis on his point that Kyiv must have an 'open dialogue' with the 'opposing sides' - continuing Russia's official stance of denying the fact that Russian forces are actively participating in combat in the Donbas.

Zelenskyy says the most important results of the summit for him is the prisoner exchange, which he confirms will occur by the end of the year. He also expresses frustration with the failure to implement a lasting ceasefire, and says that the Russian Federation "who have a great amount of influence on the forces in the temporarily occupied territories" now needs to work together with all sides to make a ceasefire a reality.

In response to a question by a journalist about the risk of a 'frozen conflict' in the Donbas, French President Macron replies that the conflict is not frozen, given the daily casualties, and that this summit has brought tangible moves towards peace in Ukraine.

Putin emphasizes the importance of fulfilling the Minsk Agreements, and that withdrawal of military forces will proceed apace. He also states that Ukraine is 'required' by the Minsk Agreements to make permanent the law on special status in the Donbas, and mentions what he believes is a need for Ukraine to 'provide amnesty for those who took part in actions in the southeast of Ukraine.'

Zelenskyy completely rejects any efforts to 'federalize' Ukraine, saying that Ukraine is a 'unitary state.' "Each Ukrainian considers Donbas and Crimea to be Ukrainian," Zelenskyy adds.

Another Normandy format meeting has been agreed to in four months, according to the conclusion document. Zelenskyy outlines the same points raised in the document - a full ceasefire before the end of 2019, with oversight from the OSCE Special Monitoring Mission, as well as increased demining efforts. Zelenskyy also mentions that they had discussed additional withdrawal points, beyond the three that currently exist at Stanytsia Luhanska, Petrivske, and Zolote.

All four leaders have taken their seats at the press conference. They have also released a document containing the conclusions of the summit. Briefly, the sides have agreed to commit to the implementation of a ceasefire by the end of 2019, as well as another all-for-all prisoner exchange. They also have reaffirmed their commitment to the Minsk Agreements, as well as the implementation of the Steinmeier formula.

The Normandy format summit has ended, and the participants are now preparing for the press conference.

Our correspondent reports that, according to sources in the Ukrainian delegation, Zelenskyy was not able to come to an agreement on re-establishing government control over the Ukrainian-Russian border - Putin offered to return control of the border after elections in the occupied territories, but Zelenskyy refused. Additionally, the law on the 'special status' of the Donbas is to be extended. But there was some progress - a provisional agreement on another prisoner exchange has been set before the end of the year.

Ukrainian Interior Minister Arsen Avakov, in Paris as part of the Ukrainian delegation, says that Zelenskyy stuck to the government position and that there was no 'betrayal'.

Putin, walking from the bilateral meeting to the working dinner, says "Good, it was businesslike," in passing to a reporter's question. He also replied "Yes, I'm happy," in response to another question about his feelings on the result of the summit.

The bilateral talks between Putin and Zelenskyy have finished, and the summit will now shift to a working dinner, followed by a press conference. In Kyiv, around 800 demonstrators near the Presidential Administration continue their vigil as they wait for the results of the summit.

The Office of the President has stated that the bilateral meeting between Putin and Zelenskyy will be followed by a resumption of four-way talks, prolonging the summit.

Meanwhile in Kyiv, demonstrators remain arrayed near the Presidential Administration on Bankova street, along with various opposition parties. Some say that they will stay in place at least until Zelenskyy's planned press briefing following the Normandy meeting.

Deputy Head of the Office of the President of Ukraine Kirill Timoshenko has given the press a quick update on the talks - he says that they're working their way through every point on a prepared communique, which could take a few more hours, though he adds that they're heading towards a final agreement. 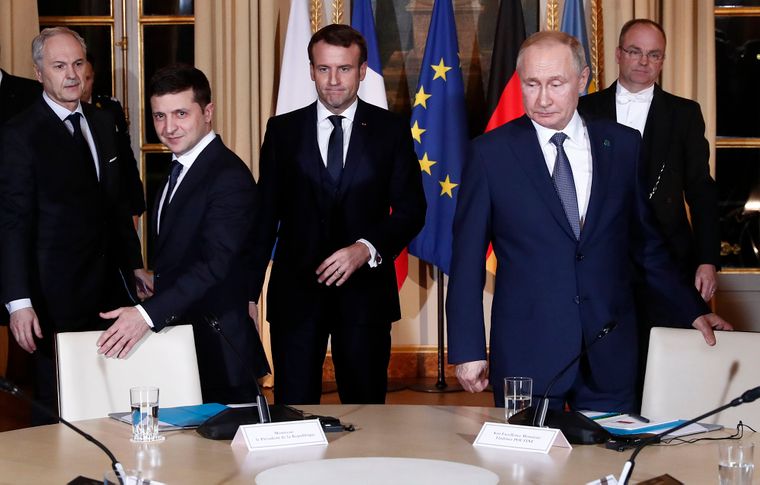 Earlier it was reported that the presidents of the Russian Federation and Ukraine will hold a meeting after the joint press conference of the "Normandy Four".

5:21 p.m. The leaders of the Normandy Four have sat down at one table — the protocol part of the talks in quadripartite format began. Upon its completion, a joint press conference of the heads of Ukraine, Russia, France and Germany is expected — it is scheduled for approximately 9 p.m. CET after a working dinner. The press was asked to leave the hall.

5:18 p.m. Delegations of the Normandy Four states are gathering in the hall where the quadruple meeting will take place.

5:06 p.m. Zelensky's bilateral meeting with Merkel has ended. Now four leaders will come together to negotiate in the quadripartite Normandy format. The Office of the President of Ukraine confirmed that Zelenskyy's meeting with Putin will go ahead.

4:55 p.m. The presidents of Russia and France have concluded their bilateral meeting, hromadske correspondent reports, while the meeting between Merkel and Zelenskyy is still ongoing.

4:42 p.m. The Ukrainian side announced its plan both publicly and privately over the past week. Volodymyr Zelenskyy himself spoke about it.

To summarize, it is as follows:

1. Ceasefire across the front line (currently only 3 kilometers out of 480).
2. Large-scale exchange of prisoners.
3. Holding elections in the currently occupied territories of the Donbas at the same time as local elections throughout Ukraine in the fall of 2020.

However, despite the fact that elections are on the agenda, there is little hope agreement could be reached.

4:27 p.m. According to our journalist in Paris, a joint press conference will take place around 9 p.m. CET. Earlier, it was reported that the briefing would start around 7 p.m.

4:23 p.m. The bilateral meeting between Zelenskyy and Merkel is taking place now.

4:22 p.m. The Office of the President of Ukraine has announced that Zelenskyy's bilateral meeting with Macron has ended. It was the first bilateral meeting in the framework of negotiations planned today to work out a vision for the end of the Donbas war. As a host party, Macron briefed Zelenskyy on the schedule and format of the negotiations.

Zelenskyy's meetings with Merkel and Putin are also planned, as well as a meeting of four leaders.

3:22 p.m. After the summit, Zelenskyy will take part in a joint press conference with leaders of France, Germany, and Russia. The outcome of the meetings will be summarized. The work session is scheduled to last three hours but may take longer. Afterwards, the politicians will come out to speak to journalists.

3:15 p.m. All the leaders have arrived at the Élysée Palace, so the summit of the Normandy Four should have started on time. The leaders are meeting in private.

3:12 p.m. Russian President Vladimir Putin has also arrived at the venue. The Russian delegation consists of Assistants to the President Vladislav Surkov and Yuri Ushakov.

Compensation for a Priceless Life. How Injured Civilians in Donbas Make Claims to the State of Ukraine
3514
Politics

How Ukraine’s Presidential Hopefuls Plan to Deal with Donbas