donate
Hromadske UAHromadske RU
AboutWhere to watchAuthors
Contacts
Society
"Even the radiators in the apartment burned down." What will happen to Irpin residents who lost their homes
426
Trending
750

Ukraine has freed 144 service members from Russian captivity, most of them Azovstal defenders
3727

“Our Kids”: Crimean Resistance to Political Arrests In Numbers
8885

Rodion shows cracks in the load-bearing walls of his apartment, completely destroyed by a shell Photo: Oleksandr Khomenko / hromadske

The first explosions near Hostomel took place on February 24 at about 4:45 am. But it was not them that Rodion was awakened by, but by messenger notifications on his smartphone – active communication began in his local group in one of the districts of Irpin. The man was angry that he, the taxi driver, was prevented from sleeping after his night shift. And then he realized that the war had begun.

Only his daughter, ninth-grader Valeria, had the survival kit ready. While the first shock passed and he somehow managed to collect things for himself and his wife Yulia, Rodion smoked a pack of cigarettes on the balcony, watching Russian helicopters fly over the Hostomel airport.

They evacuated to relatives in the Zhytomyr Oblast burning up the remnants of fuel as the lines at gas stations were inconceivable. And four days later the first shell hit their house in Irpin, and soon they were left without an apartment.

Living in a sanatorium

Irpin sanatorium "Dubky" (‘Oaks’) is located on the edge of a coniferous forest. For many years, it was one of the most famous local resorts and even a cultural center – in the 2000s annual seminars for creative youth were held here. 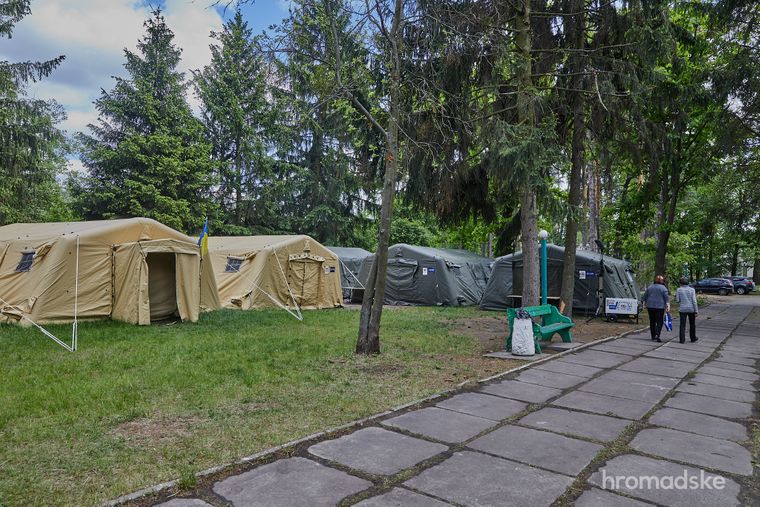 Tents on the territory of the sanatorium "Dubky", where people who lost their homes in Irpin live

The main building of the sanatorium is clearly visible from the street. All that was left of it were the outer walls, everything else was burnt out. But I am not so much interested in the sanatorium as in the large tents hidden in the depths of its park.

I find the administrator Nina Oleksiyivna. She is the first resident of the temporary accommodation in the sanatorium "Dubky", which is exactly what is written in the certificates of all Irpin residents who settled here. The woman has been at “Dubky” since May 10.

Two months earlier, on March 10, Nina left for Kyiv. Four days later, her children sent photos of her burned-out private house, which only had the walls remaining. 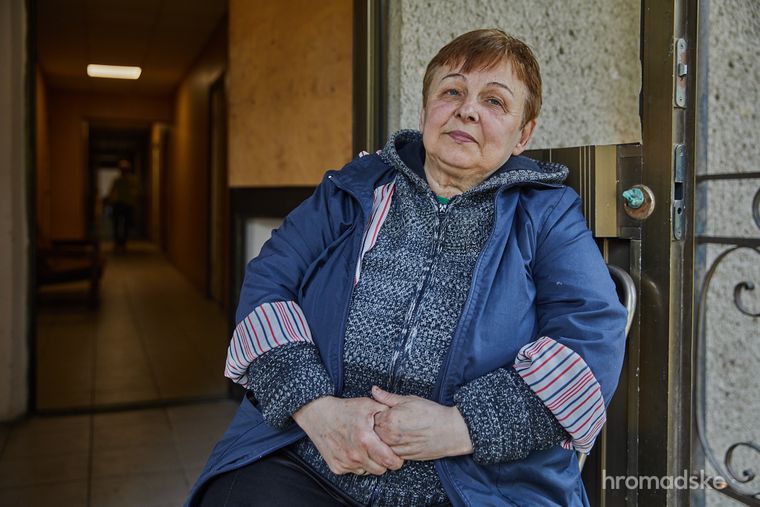 Nina Oleksiyivna sitting at the entrance to the sanatorium building

“I cried. I screamed because I understood what it meant to be left with nothing at that age. Someone came and destroyed our house in one minute. If I were a little younger, I would join the territorial defense and fight against them, because they deprived me of everything. Disgust and contempt for them,” Nina Oleksiyivna's words are emotional, but she speaks them calmly and sadly, as if she accepted the loss as a fait accompli.

She lives in a small room in one of the buildings of the sanatorium – these were allocated primarily for the elderly and families with children of Irpin, who lost their homes. Some people still live in large tents nearby.

"We saw photos of our house on the Internet"

"Oh, you have the same sneakers!" exclaims Rodion, meeting me near the tents in the sanatorium, and I notice that we really do have exactly the same hiking boots. His sneakers of rare size 46 were brought by volunteers when he was helping the Zhytomyr territorial defense. Because all the seasonal shoes remained in the burned apartment. 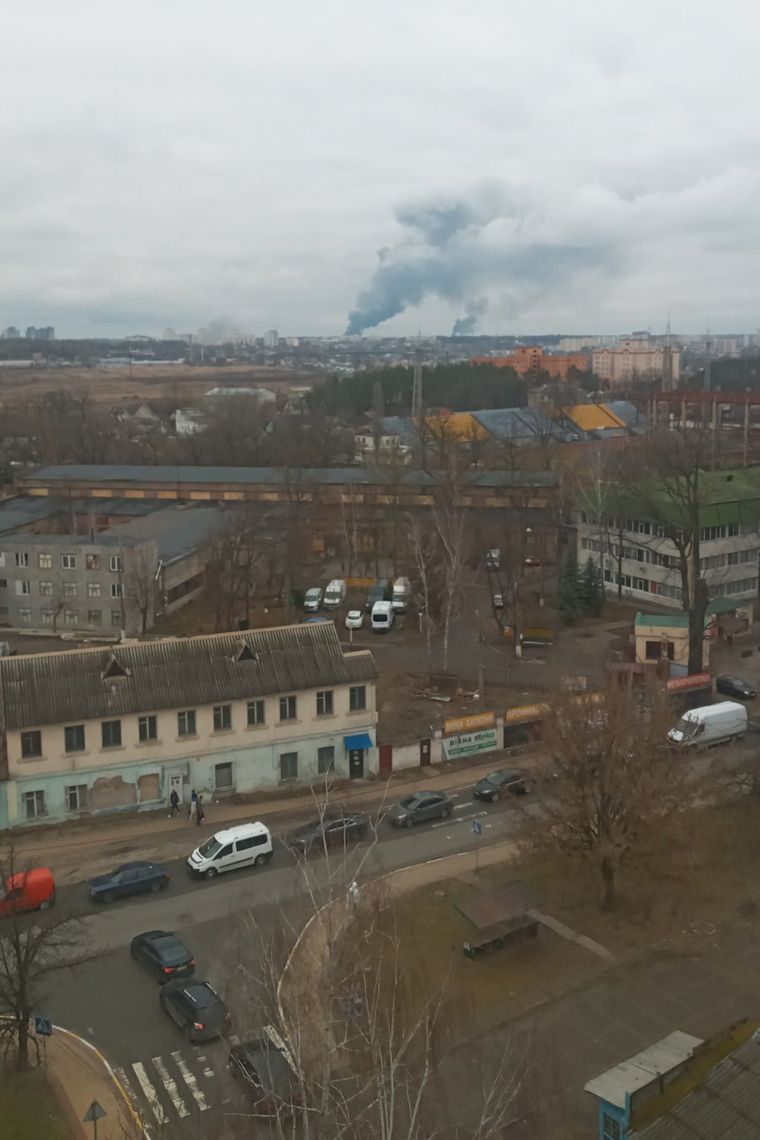 A photo of the aftermath of the explosions in the Hostomel area taken by Rodion from the balcony of his apartment in Irpin on the morning of February 24. The road below is full of cars leaving the city

Rodion, his wife Yulia and daughter Lera have been living in the sanatorium for a little over a fortnight. While there is no normal work, they are collecting the documents needed to get new housing in the future, and trying to restore what can be restored.

During the evacuation, Yulia forgot her passport in the apartment, Rodion – his medical card with the results of many years of examinations, according to which he should already have a disability.

They left their apartment in Irpin on the first day of the war. Two-room apartment on the eighth floor of a panel building with windows facing Hostomel. First, a high-explosive projectile landed on the sixth floor of the building, and a few days later – on the eighth.

Rodion saw photos of his shelled house on the Internet. He returned here for the first time in March, when the "Damaged Housing" program was launched in "Diia" state services app – the destruction had to be recorded. But the locks in the apartment melted, and he couldn't even open the door, photographing the damage through the crack between the door frame and the wall. 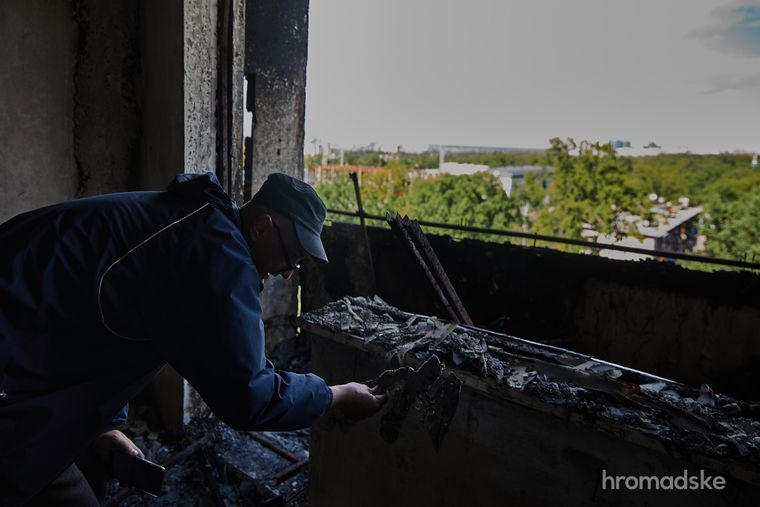 Nothing survived there, Rodion explains as he drove me to his apartment. Even the radiators burned almost completely, despite the fact that the melting point of the aluminum from which they are made exceeds 600 degrees Celsius, the man recalls.

At first, he refuses to ascend to his apartment with me as it is difficult both psychologically and physically: Rodion has a sore leg. But ten minutes later he goes in nonetheless, hoping to find at least something that can come in handy in the future. 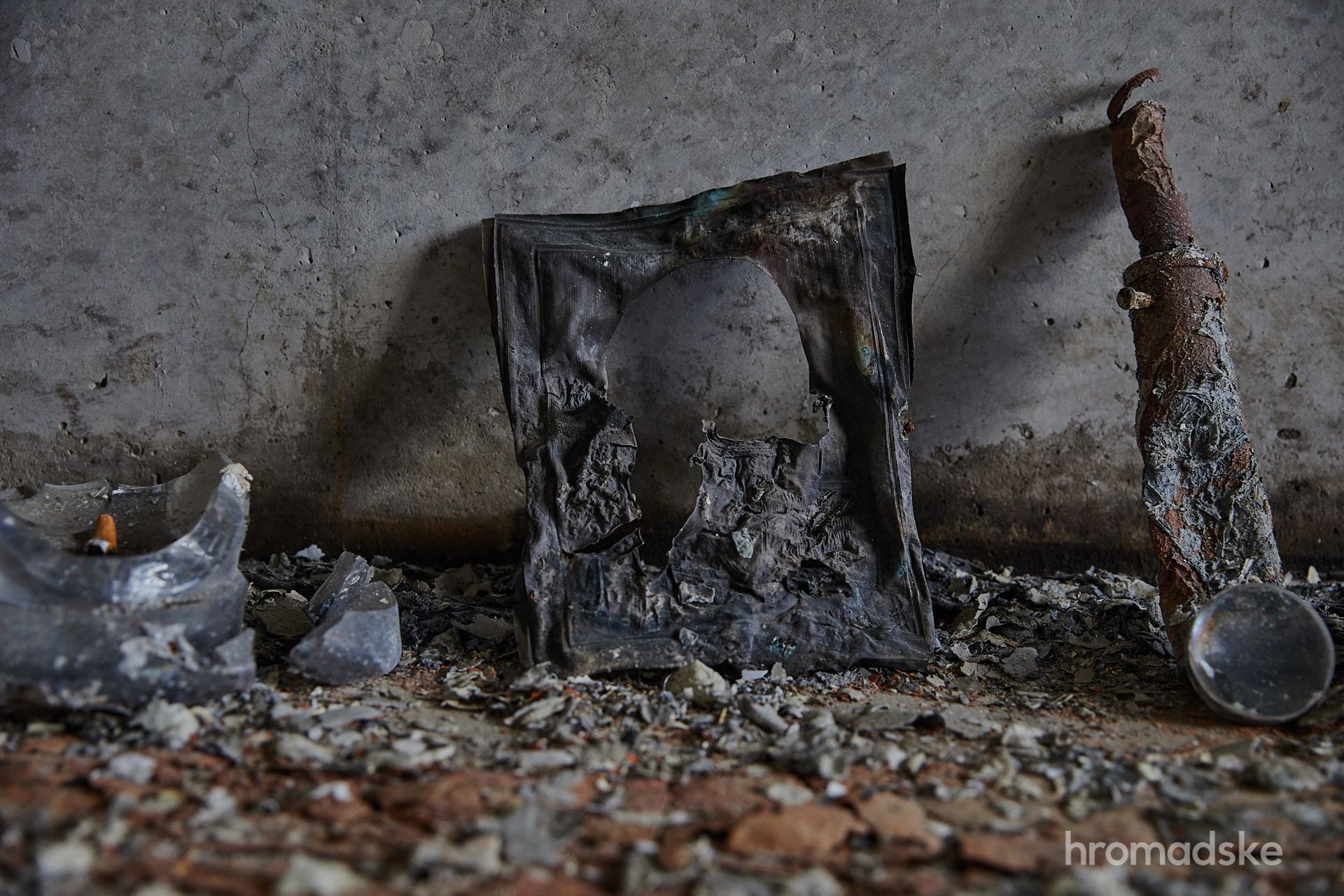 All that was left of the apartment where Rodion, Yulia, and their daughter Valeria lived

All that is left in the apartment are things made of refractory metal and ceramics. As well as the base of the family icon, which stands, leaning on one of the cracked walls of the apartment. The rest is ashes.

Rodion once again examines the remnants of his former life, shows his professional construction tools collected at a time when he worked as a plumber and furniture collector. They lie, carefully stacked on the floor, look intact, but the man explains that only the form has survived, the metal itself can no longer withstand the load. He checks each of the tools again and gets ready to leave in frustration. 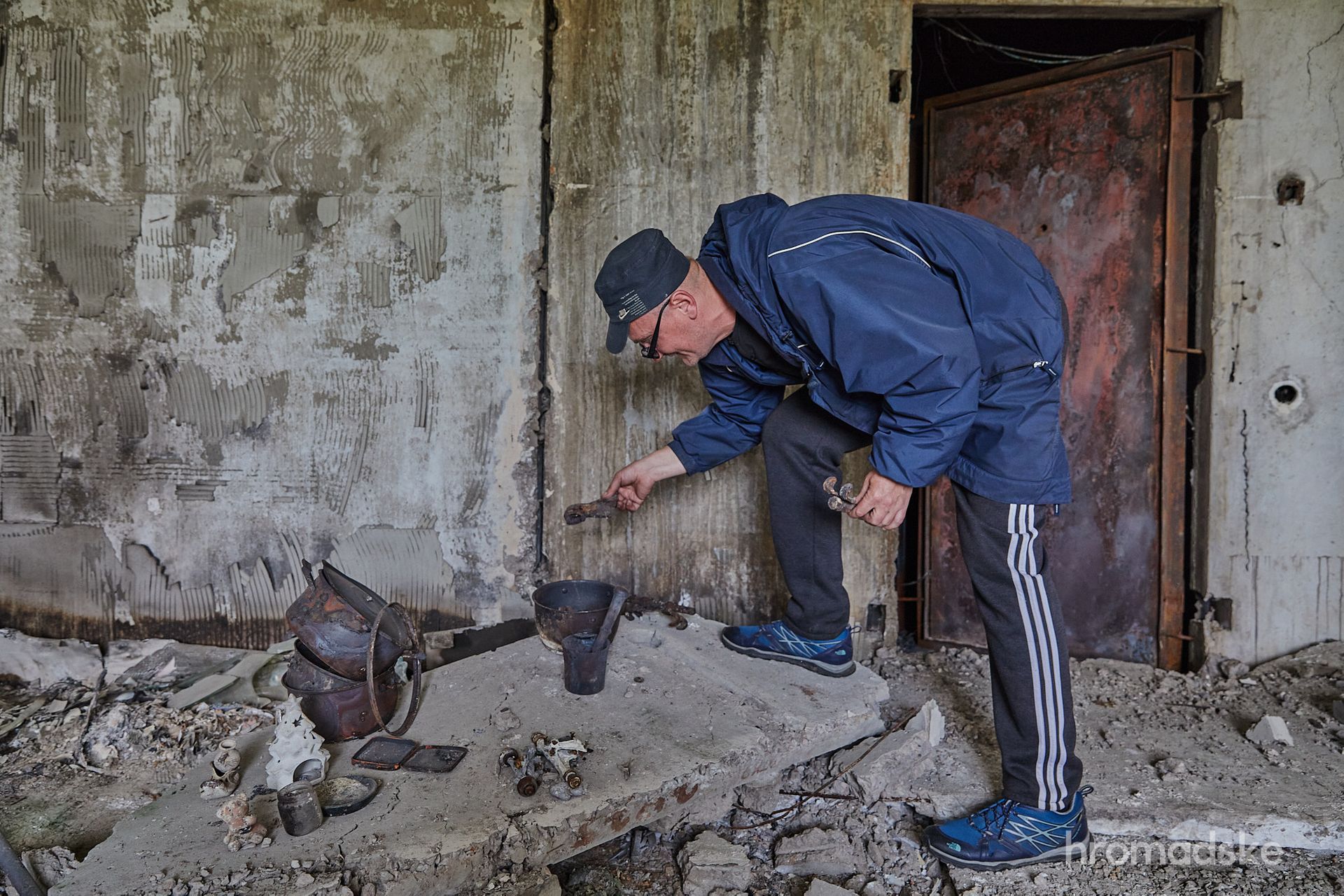 Rodion checks his tools left in the burned-out apartment

Those who lived in the house during the occupation say they were lucky because there were no executions, the men were stripped naked for a search only once, and were allowed to go outside from the basement during the day to prepare food.

During the occupation, four people died here: one man was shot because he left home too quickly, another was found behind a neighboring fence, but the cause of death was never found out, an elderly woman burned in one of the apartments, and another elderly man died of a stroke.

The lower five or six floors have not been severely damaged, so residents hope the house will not be demolished and they will not be evicted. There is no final expert opinion on this yet. 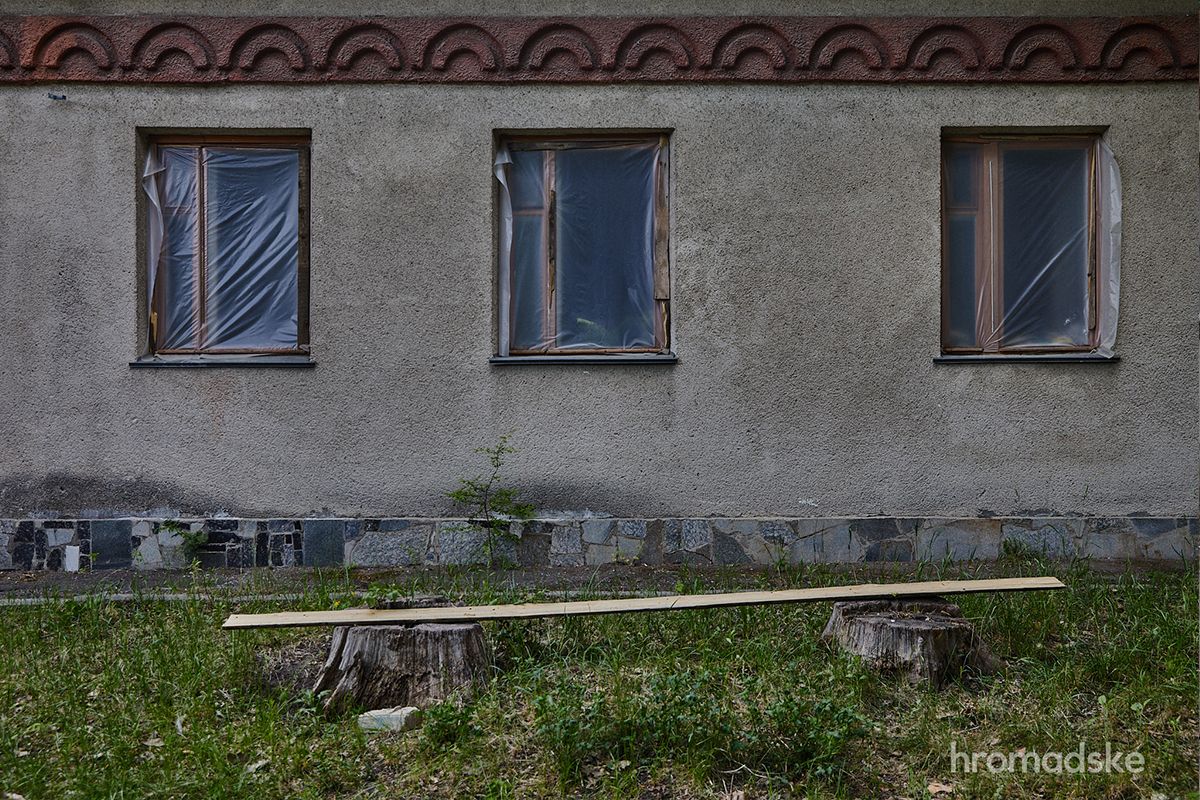 In the building of the sanatorium, where the residents of Irpin who lost their homes were housed, not a single window remained intact

Almost 200 residents of Irpin who lost their homes due to the war now live in "Dubky": 120 in rooms and almost 70 in tents. This is the only such center in town so far, but Ukrzaliznytsia cars are ready on the tracks, ready for the newly "homeless people" like them. A modular town has already been set up in neighboring Bucha, where people will soon be housed.

Town officials provided temporary housing, while food, clothes, and medicines are brought by volunteers. There are even "beauty volunteers" – specialists who cut hair in the open air for free and make manicures and other cosmetic procedures for everyone. 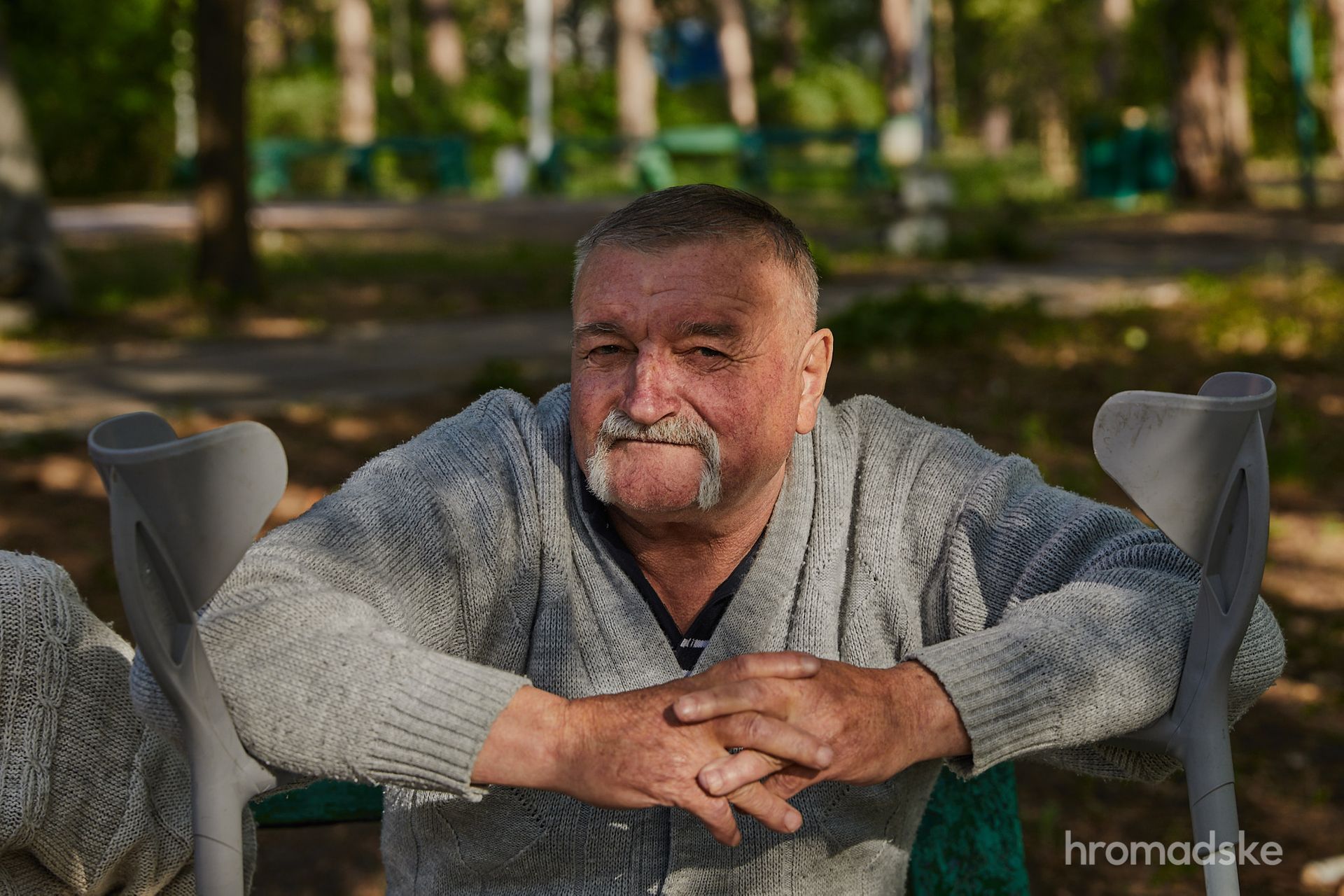 Mykola has problems with his knees, he says that it is due to his participation in the liquidation of the Chornobyl accident, where he was a driver. In Irpin he lived in a private house

Mykola, Vira and Valentyna are smiling whilst talking on a bench in the park near the sanatorium – they do not resemble homeless people. But the clothes on Mykola and Vira are the same ones they wore in Irpin at the beginning of the war. Mykola's private house burned to ashes, Vira's apartment burned down, Valentyna lived in a dormitory, and it still seems to be possible to restore it, so the woman hopes to leave her bed in one of the tents soon and return home.

Neither Mykola nor Vira dared to go to their destroyed homes after returning from the evacuation.

"It's scary to be homeless at age 70. We started with dormitories – and we end up in dormitories," the woman sadly states. 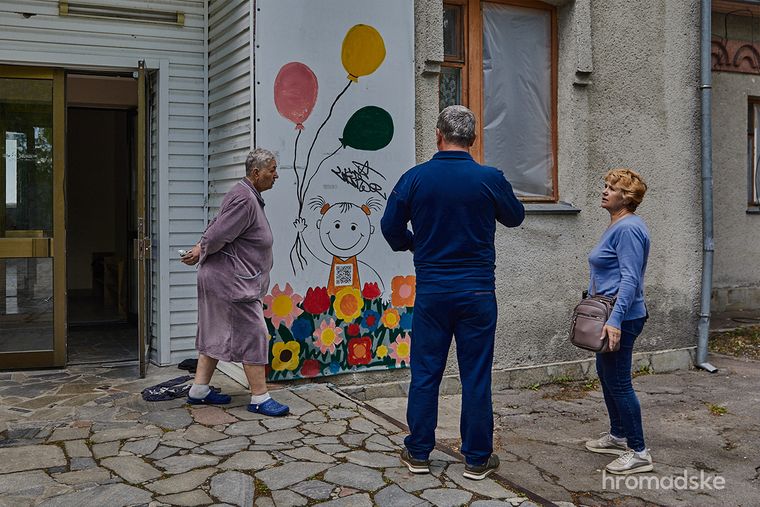 A resident of the sanatorium (left) accompanies the guests who came to her at the entrance to the building where people who have lost their homes live.

Irpin and Borodyanka are the two towns in the Kyiv Oblast that have suffered the most. According to Irpin Mayor Oleksandr Markushin, about 1,000 houses or 71% of buildings in town have been damaged in one way or another.

In total, almost 4,000 Irpin families were left homeless. Residents of apartments should be the first to receive new housing. Authorities plan to either buy commissioned but vacant apartments from developers or build new housing estates. It has already been announced that the first such residential complex will soon be built on the territory of the "Lastivka" sanatorium. It will be designed for about 1,000 families.

It is known that 17 Irpin high-rises will be demolished. Another 25 damaged houses are under examination, which means that they are partially destroyed. At the same time, the type of compensation that victims must receive depends on the scale of the destruction. If the house is partially destroyed – there will be compensation for its repair. If the apartment is completely destroyed, the victims must get a new apartment.

The house where Rodion's family lived is still under examination. But cracks in the retaining walls in his apartment indicate that it is impossible to restore the house, the man said. 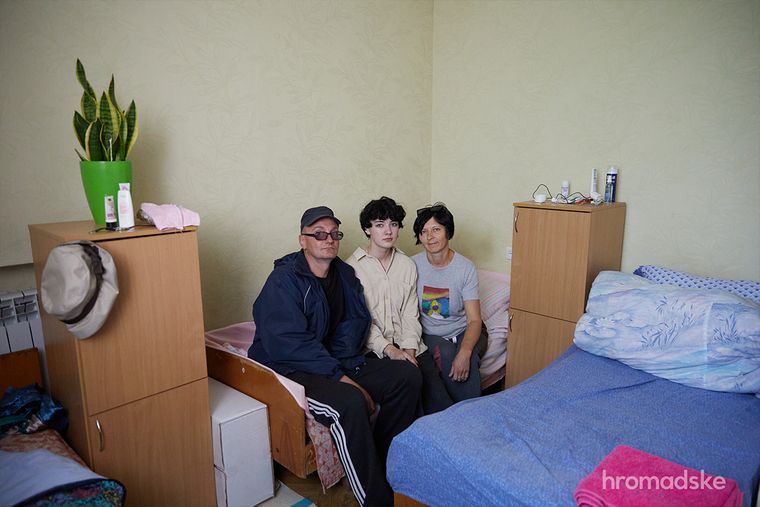 Rodion, Valeria and Yulia in the room of the sanatorium, where they live after losing their apartment

The most important thing Rodion and Yulia are doing now is collecting the documents needed to get a refund. In addition to registration in "Diia", one needs an application to the Town Council, a coupon for accommodation, a certificate of damaged property, a report to the police with photos of the apartment, firefighters' report on housing (they have not yet inspected Rodion's apartment) and possibly a petition to the prosecutor's office if compensation is received through reparations from Russia.

Each of these documents takes a day of standing in lines, and psychological resources are sometimes lacking. In the meantime, Rodion himself admits that during the war he became noticeably more irritable, his nervous system could not withstand constant stress. But the family dreams of getting their own new home by the year-end.

The statistics of the destruction of private housing in Irpin is currently approximate – about 2,000 buildings have been partially or completely destroyed. A recovery mechanism for the owners of such real estate has not yet been developed. One thing is clear – their problems will be systematically solved after consulting with the owners of the destroyed apartments.

A woman leaves the sanatorium "Dubky", where the residents of Irpin, who lost their homes due to the war, live

Nina Oleksiyivna will not be able to restore her house on her own; further steps remain to be seen. Working as an administrator in "Dubky" brought the woman to her senses.

"Amid chores and people, there is no time for stupid thoughts, and I have come to life a little. I know that no one will evict me from here until there is some permanent housing, so I calmed down a bit," Nina smiles.

Despite everything, she is alive and believes in her future.