The head of the European Commission, Ursula von der Leyen, made a video address in the hall of the Ukrainian parliament on July 1. She assured that Europe will continue to support Ukraine, but Ukrainians need to implement a number of reforms, the press service of the Verkhovna Rada and the President's Office reported.

In her address, President of the European Commission von der Leyen praised Ukraine's work regarding the quick submission of an application for EU membership, as well as the continuation of the work of the legislature and the preservation of democracy during the war. She assured that Europe will support Ukraine "as much as needed".

"We in the European institutions work day and night to support you. But it is thanks to your efforts that the work is done. You have mobilized not only your institutions, but also the best energy of your country," von der Leyen said.

The president of the European Commission emphasized that Ukraine currently has a "very clear European perspective" and is a candidate for the EU, "which seemed impossible five months ago."

There is a long road ahead for Ukraine but Europe will be at your side every step of the way.

For every reform, for as long as it takes.

From these dark days of war until the moment you cross the threshold that leads into our Union. pic.twitter.com/tlVaGeCmXJ

"The next steps are within your reach. But they require hard work, determination and, above all, unity of purpose," von der Leyen stated.

She emphasized that Ukraine should continue the fight against corruption, appoint the chair of the Specialized Anti-Corruption Prosecutor's Office and the director of National Anti-Corruption Bureau, reduce the influence of oligarchs on economic and political life, adopt legislation on the procedures for selecting judges, as well as a law on mass media, which will bring Ukrainian legislation into line with current standards EU.

"Most of the laws and institutions you need already exist. It is time to transform them into positive changes. Of course, change always takes time. This is how our democracies work. They require constant effort and dedication. But, for example, no one expects Ukraine to fill all the positions in your new institutions while many of the best of you are fighting at the front. But Ukrainian democracy must remain on the right track," von der Leyen said. 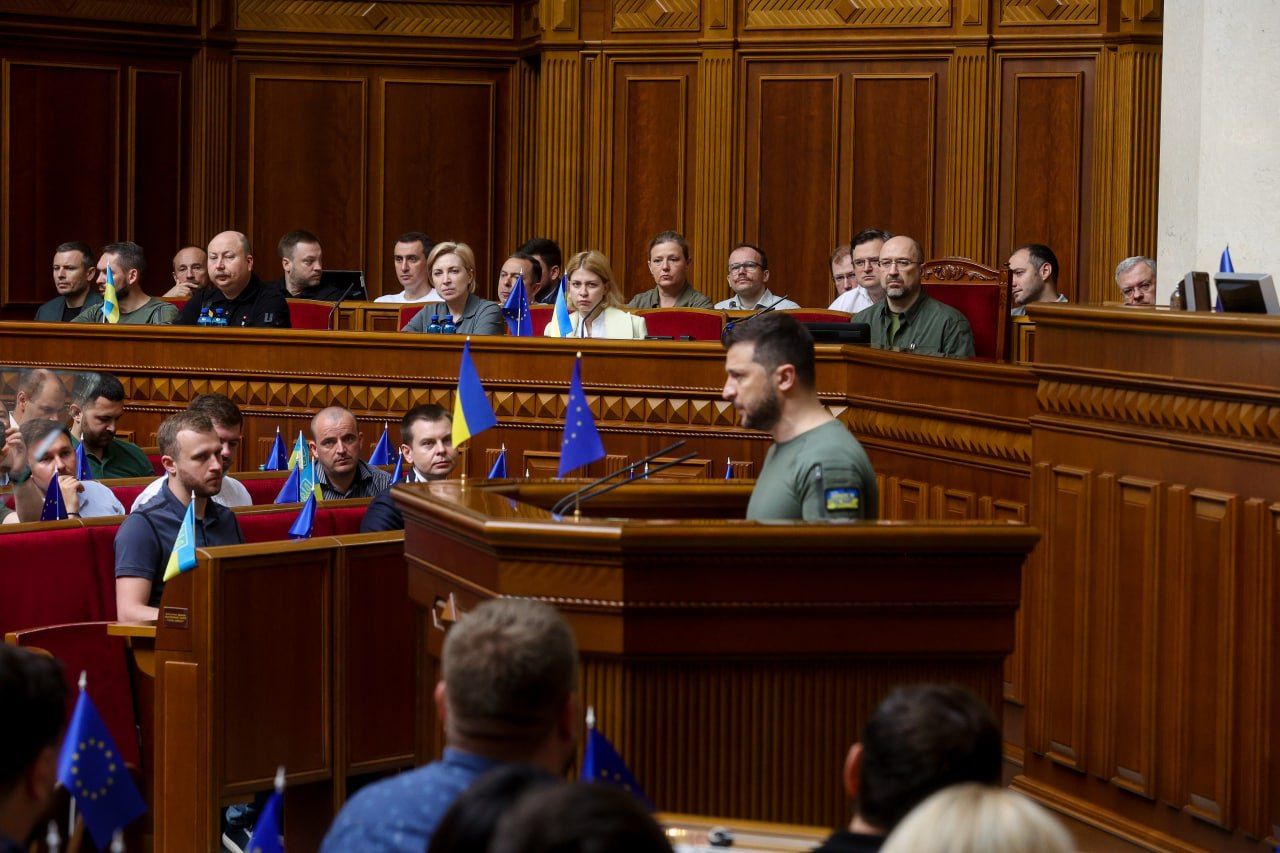 Participation of the President of Ukraine in the plenary session of the Verkhovna Rada, July 1, 2022
Photo: Denys Shmyhal / Telegram

President Volodymyr Zelensky, who also took part in the plenary session of the parliament, called on state officials to perceive their duty to work for the European choice as a struggle for Ukraine.

"We have to prepare the state for the start of membership negotiations as intensively and responsibly as we prepared the decision on candidacy. Today, the flag of the European Union will appear in this hall. And it should not just be a beautiful gesture. It should be a symbol of our task — the task of all branches of government. So that there are no pauses in our work," Zelensky stressed.

Ukraine is a candidate for EU membership

Ukraine has received the EU candidate status after EU leaders at the summit in Brussels on June 23 finally supported this decision. Before that, the European Parliament adopted a resolution calling for Ukraine and Moldova to be granted this status immediately.

In order to start accession negotiations, Ukraine must now implement a number of European Commission recommendations. Deputy Prime Minister-Minister for European and Euro-Atlantic Integration Olga Stefanishyna says that Ukraine plans to implement the recommendations of the European Commission necessary to start the accession negotiations by the end of 2022. For this purpose, the Verkhovna Rada plans to adopt more than 30 bills.