“Let’s build a bridge and look ahead.” Those were the words of Ukrainian President Volodymyr Zelenskyy on July 7, 2019, next to the checkpoint between government-controlled territory and that of the so-called “Luhansk People's Republic” in the village of Stanytsia Luhanska. He was swiftly bombarded with questions.

Four months after that statement, on November 20, a bridge crossing the Siversky Donets river that separates government-controlled territory from Russian-occupied land, was re-opened after having been bombed in 2015. But only for pedestrians and emergency services.

“To avoid speculation I’ll just say it: tanks will not be able to cross this bridge,” explained Zelenskyy, adding that the bridge is a symbol of Ukrainian unity.

Hromadske visited Stanytsia a week after the bridge’s opening, in order to ask people who use the bridge whether or not the bridge represents unity to them too, as well as what they expect from the Normandy format meeting on December 9 in Paris, where the leaders of Germany, France, Ukraine, and Russia, are planned to meet. 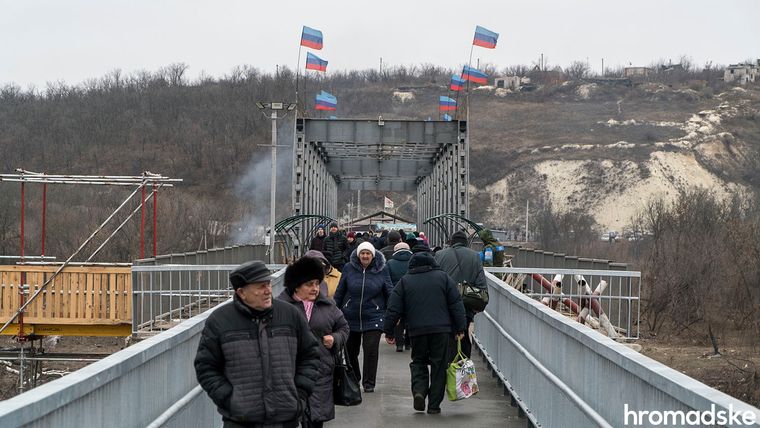 “It Got Worse, Ambulances Can’t Cross”

Troops from both sides were withdrawn one kilometer from the river in order to restore the bridge. Gunfire hasn’t been heard in Stanytsia since mid-summer. But there is a war of position, still, on the bridge.

It’s now a grey zone, where soldiers are not allowed to go. Ukrainian representatives from the Joint Centre for Control and Coordination (JCCC) on ceasefire conduct surveillance here. Three meters away stand two people dressed in Russian-style military fatigues. They also carry the notation JCCC.

“He can’t be here, it’s a violation,” Oleksandr told us. He’s the senior in the Ukrainian JCCC group. “Russians could stand there, but from 2017 they refused to participate in the work of the Joint Centre.”

“And these ‘LPR’ flags should only fly from the middle of the river (the contact line bisects the Donets – ed.) but they don’t take them down,” Oleksandr added.

The other side of the bridge, controlled by the so-called “LPR”, has benches. They’ve been blown away by wind several times. Those who followed the movements on the bridge online, have written: “Where are the benches, you bastards?” 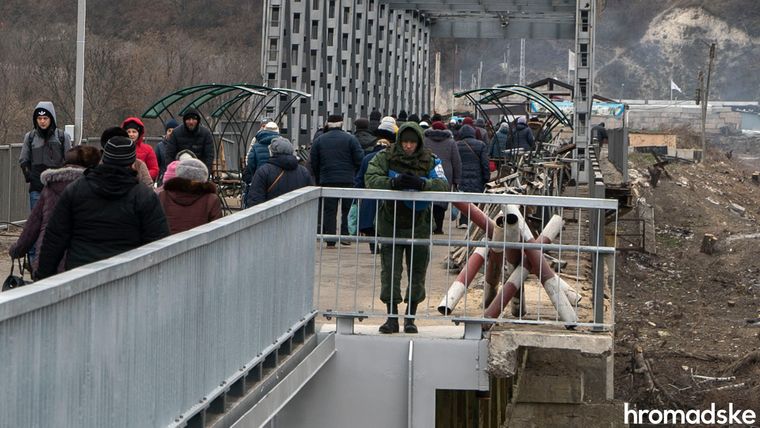 Representatives of the JCCC in Russian-style camouflage military fatigues stand on the part of the bridge that’s considered to be in the ‘grey zone’ – soldiers aren’t allowed there. Luhansk region, Ukraine, November 27, 2019. Photo: Oleksandr Kokhan / Hromadske

There are no benches on the Ukrainian side of the bridge, but there are free buses – two, to be specific. As well as two electric cars for people with disabilities and those over 75.

“How much does the bus cost on that side?” we asked.

“6 rubles to Knyaz Ihor,” (a mountain on Stanytsia’s side, which is controlled by the so-called “LPR” - ed.)  was the answer.

Very unique, and specific to Stanytsia, forms of business have appeared around the Stanytsia bridge in previous years. They all provide some sort of service to bridge-crossers. 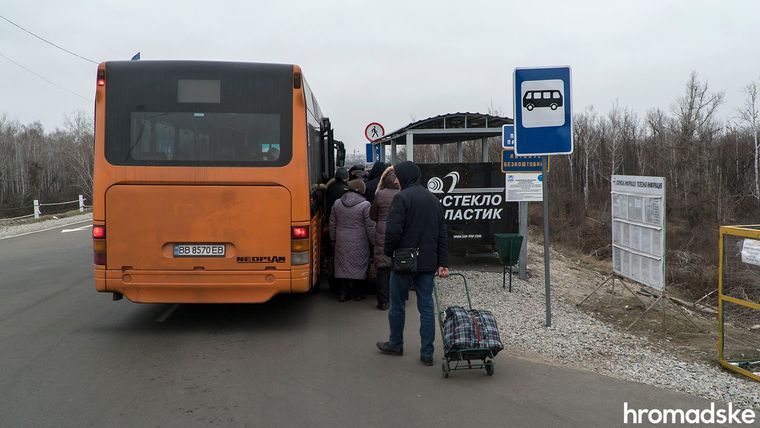 A free bus on the Ukrainian-controlled side takes people from the bridge to the village. Luhansk region, Ukraine, November 27 2019. Photo: Oleksandr Kokhan / Hromadske

When the bridge was in shambles, it still saw a passenger flow of about 10,000 people per day. That number rose to 13,000 after the bridge’s restoration. 80% of those are pensioners. They visit Stanytsia to receive their pensions, which they can only do in banks operating on government-controlled territory. They also visit to update their registrations, to note that they are still alive, and that they are somewhat refugees. Almost no one tries to hide the fact that they actually live on non-government-controlled territory.

“Did it get any better?” we asked a woman with two walking sticks whom we helped get off an electric car.

“Better. Before we had to walk up and down, but now we walk on a straight path.”

“But it’s worse for me,” said another woman.

“I have heart problems, but now an ambulance won’t cross this narrow bridge.”

“But the president said that they could pass.”

Previously, it cost 150 UAH ($6.30) one way to hire a car to take a wheelchair the kilometer distance from the bridge to the JCCC checkpoint. Now the number of these services has decreased since there are now free buses, electric cars, and a straight bridge. But a few men with vehicles are still there, waiting for clients. 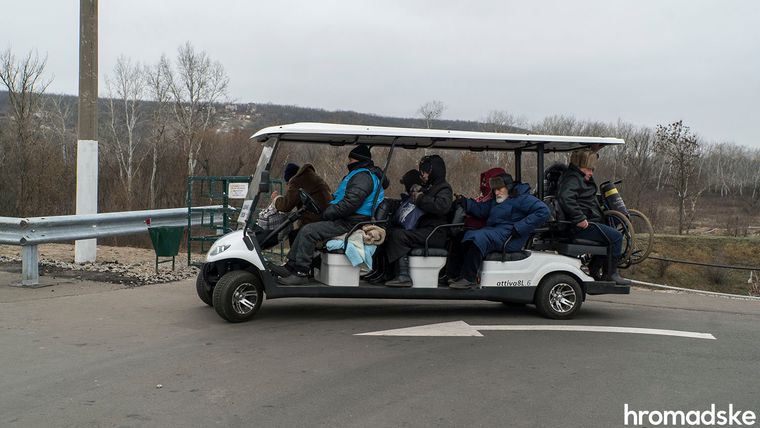 On government-controlled territory, there are also electric cars – for people with disabilities, and for those over 75. Luhansk region, Ukraine, November 27, 2019. Photo: Oleksandr Kokhan / Hromadske 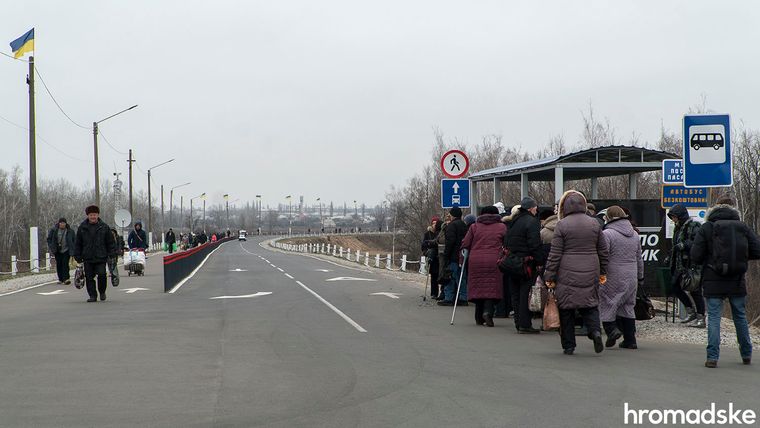 People wait for the bus at the bus stop. There are two buses running here now. 80% of those that cross the bridge are pensioners. Luhansk region, Ukraine, November 27, 2019. Photo: Oleksandr Kohan / Hromadske

We met one woman on the bridge three separate times. She crosses to receive her pension and takes goods “through the border for sale.”

“What do you take over in general?” we enquired.

“Is it cheaper here?”

“Ours is cheaper and tastier, here in Ukraine.”

“What’s cheaper on that side?”

People are allowed to take up to 50 kilograms of goods on a single trip. But there are a number of limits and restrictions. For example, border guards recently forbid a group from taking a selection of fur coats and jeans into Luhansk.

Another type of business in Stanytsia is the taxi business. For 100 UAH ($4.20), they’ll take pensioners from the closest ATMs to the checkpoint (which always have long lines), to the furthest ones. There, people can receive their pensions, waiting only one hour instead of three. Before the war, there were only 2 ATMs in Stanytsia, and now – 14. And more are planned. 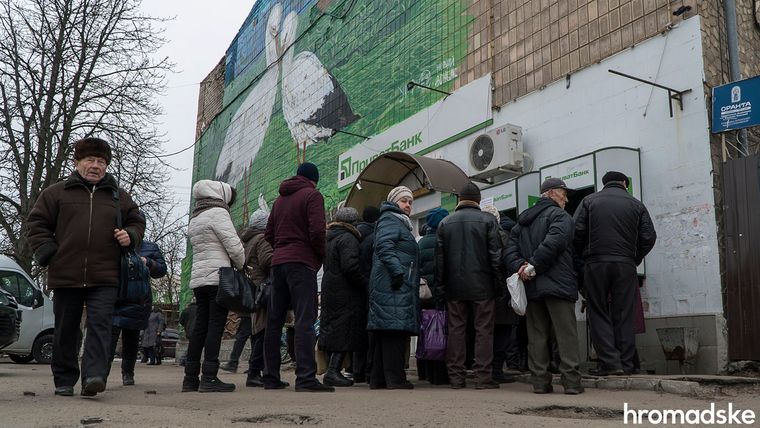 Over the years of the war, Stanytsia Luhanska has seen the number of ATMs in the village increase from 2 to 14. Luhansk region, Ukraine, November 27, 2019. Photo: Oleksandr Kokhan / Hromadske

“And if peace comes, where will this business go? They’ll suffer without us. We give them money. Even the kiosks close when we leave,” commented one woman from Luhansk and Alchevsk in line at an ATM. 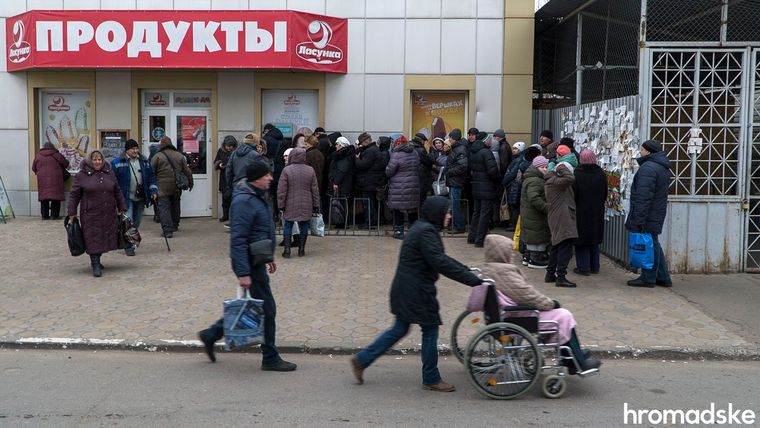 Some people in Stanytsia Luhanska have a small business – they carry goods “through the border for sale”. Luhansk region, Ukraine. November 27, 2019. Photo: Oleksandr Kokhan / hromadske

Halyna Barabashova is a local activist. In 2016, when there was a first attempt at military withdrawal, she demonstrated against. Now she’s for it.

“At the time, in 2016, there was still shooting, someone could have seized us at any point. But now it’s quiet, Stanytsia is patrolled by police, and it’s gotten calmer,” says Barabashova. 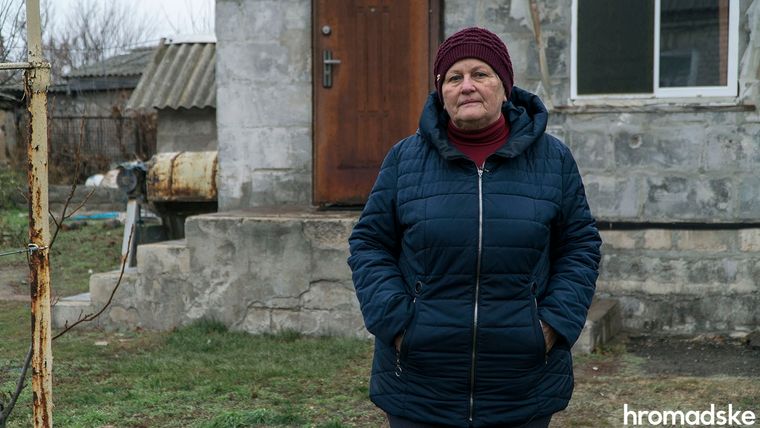 Her son’s house burned down in 2016. He left for Russia, while a woman looks after what was left.

We went to look at the house with Barabashova. But after the withdrawal of troops, a few streets in Stanytsia ended up in the grey zone, including her son’s house. A barrier with a stop sign prevents further movement. This barrier is a checkpoint for Ukrainian soldiers.

“You can’t go there, only with permits,” one of the soldiers said to Barabashova. “You can get a permit at the village council.”

We head back. We meet a man on a bicycle while walking. He lives on one of the streets caught in the grey zone.

“I live there, my wife, my mother and also our neighbor. Others aren’t allowed, but everyone wants to return. Well, I’ll head on then, or they won’t let me through because of this conversation,” he says, and pedals further. 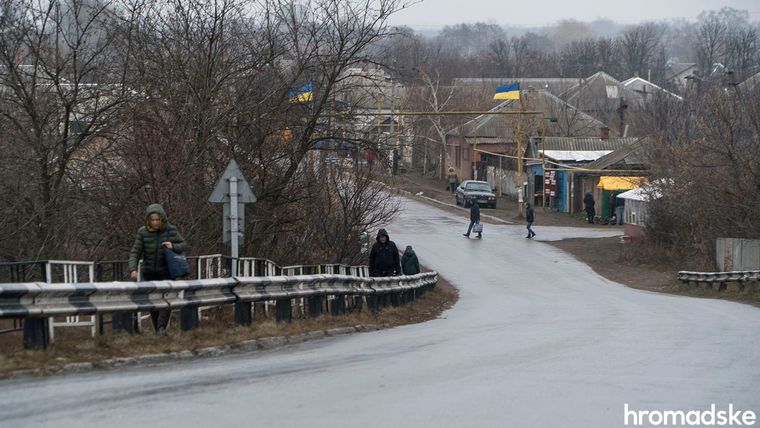 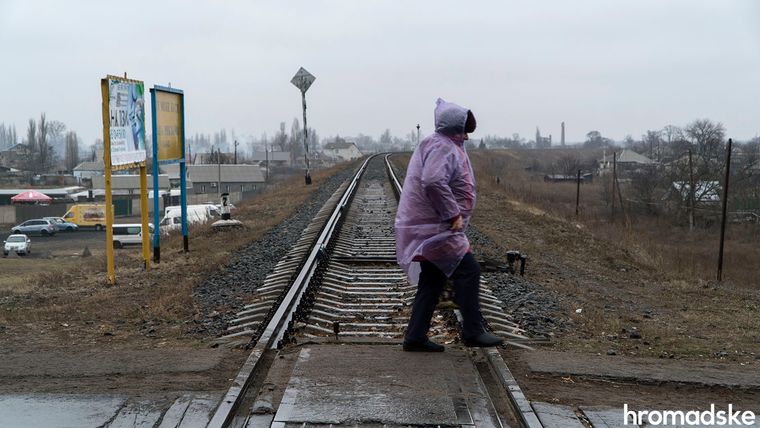 Nataliya Zhurbenko is another local activist. She’s a refugee from Luhansk. In 2016, she was against the withdrawal of troops, and remains so. She says that she’s even received threatening phone calls for her position. Zhurbenko is sure that these threats came from separatists – both local and from Luhansk.

“I only trust the Ukrainian army. It’s calmer with them. I don’t trust the police, so I don’t see anything good in withdrawal,”  she says. “What about the bridge?” we ask. “Well yes, it’s done from a humanitarian point of view. But they all came previously from Luhansk anyway, and now they still come, only faster.” 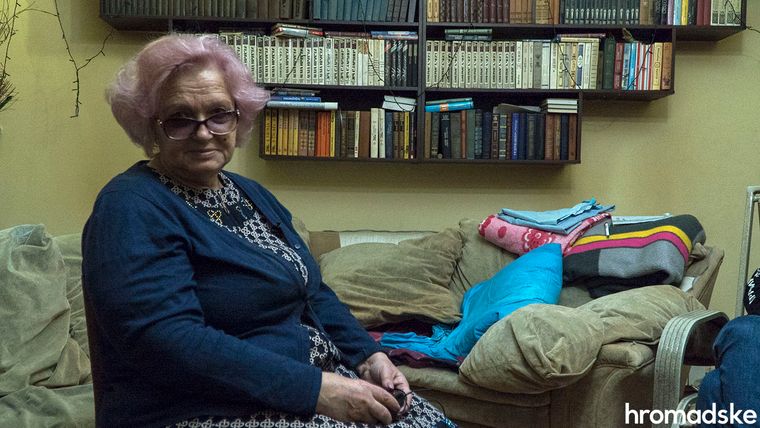 Nataliya Zhurbenko – a Luhansk refugee, she opposes the withdrawal of forces and wants the Ukrainian army to be closer to the village. Luhansk region, Ukraine, November 27, 2019. Photo: Oleksandr Kokhan / Hromadske

Both women, Barabashova and Zhurbenko, see the withdrawal of forces differently, but they agree on one thing: they say that Stanytsia suffers while the war is very comfortable for Luhansk.

“They get two pensions. Groceries are cheaper here. Utilities are more expensive here, but cheaper there. They made a road from the checkpoint to the bridge, but we don’t have any roads at all in Stanytsia. So what, it turns out that, despite the fact that things should be better here, it’s actually better in the ‘LPR’? That’s not how things are supposed to be,” says Barabashova. 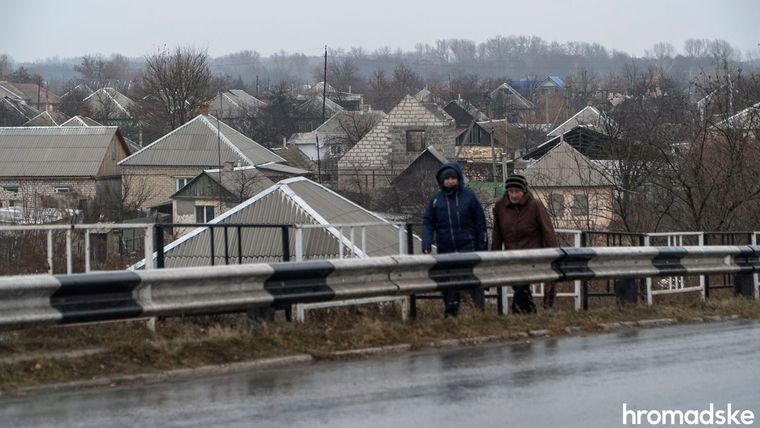 From Stanytsia Luhanska to Paris With Hope

Every conversation in Stanytsia at the ATMs, in buses from the checkpoint to the bridge, is about prices, lines, and of course, Paris. On December 9, a meeting in the Normandy format is planned in that city. Everyone is waiting for it to happen.

“We hear rumors that everything should end by May,” says the resident from Alchevsk.

We asked what Zhurbenko and Barabashova expect from the meeting in Paris.

“I don’t expect anything good. It’s better for us for this conflict to be frozen because they’re saying that they’ll hold elections. And they’ll choose their own people, and our separatists are friends with theirs. That means things will be worse in Stanytsia too,” says Barabashova.

“I can only hope that this meeting doesn’t happen at all. I don’t trust Putin, and I have a lot of evidence backing up this belief,” says Zhurbenko. 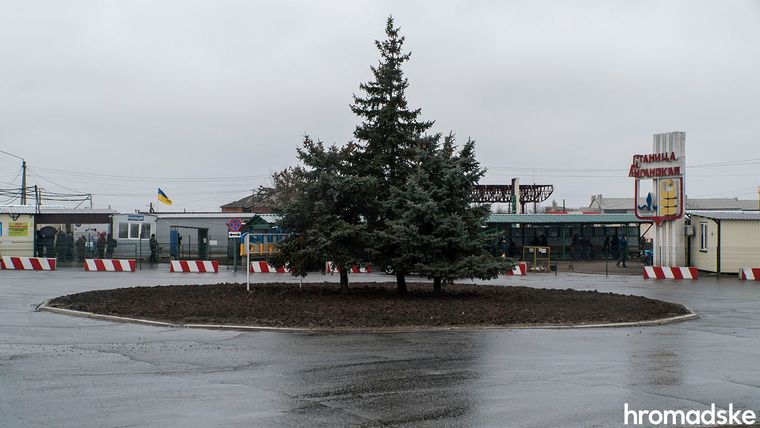 We asked the same question to those on the bridge returning from government-controlled territory to occupied land.

“I hope that we’ll finally be able to get our pensions in Luhansk. How much longer can we keep going back and forth?” asks one elderly woman.

“We’re waiting for Ukraine to come there, where it should be,” answers a man.

Ukraine Separatist Republics Won’t Survive On Their Own
2496