Ex-MP turned collaborator found to store over 6,000 unique artifacts from Crimea worth millions of dollars
3858

There are a lot of talks about former U.S. Vice President Joe Biden's son Hunter's negative impact on his father's career. Let's take a closer look at who this man is.

Hunter Biden is the youngest son of Joe Biden. Until recently, he served on the board of directors of the Ukrainian gas company Burisma, which is owned by Mykola Zlochevsky, the former ecology minister during the presidency of Viktor Yanukovych. And that is precisely why Biden Sr. has problems now. Current President Donald Trump accuses the Democratic candidate of corruption.

The fact is that when Biden was Vice President and oversaw U.S. policy on Ukraine, he threatened to cancel American financial aid to Kyiv unless Viktor Shokin, Ukraine’s Prosecutor General at the time, was fired. According to Trump, Biden wanted to stop the investigation of Burisma, where his son worked. This was allegedly a conflict of interest. In fact, Biden demanded Shokin to be fired because the IMF and the E.U., as well as some Republicans in Congress, demanded the same.

“The idea that $3.5 million [that Hunter Biden may have earned at Burisma] would sway the foreign policy of the United States is ridiculous,” British journalist Oliver Bullough told Hromadske.

Still, many believe that joining Burisma’s board of directors was imprudent on the part of Hunter Biden. “The appearance of a conflict of interest is good enough, at this level of politics, to keep you from doing things like that,” former U.S. official said in a comment to New Yorker.

The Burisma case is not the only scandal that Joe Biden got into because of his son. His image has repeatedly been influenced by his son's questionable business relationships, his drug and alcohol problems, as well as other scandals and accusations. We look at the Biden family and how Hunter's behavior influenced his father's career.

Loss of Loved Ones

Hunter is the only Joe Biden’s child still alive. Their family suffered several tragedies. In 1972, a car crash killed Hunter's mother and sister. His brother Beau and Hunter himself were severely injured. Then Joe Biden won the Senate election for the first time. In January 1973, he took the oath of office in a ward where the two-year-old Hunter was recuperating.

In 2015, Hunter's older brother, Beau, died of glioblastoma. He was 46 years old. In his memoirs, Joe Biden wrote that he initially thought it might ruin him, but in fact, united the family.

In almost 50 years in politics, Joe Biden has taken the controversial steps that he now regrets. These include support for the 2003 invasion of Iraq. But in the eyes of the liberal part of Biden's supporters it is rehabilitating how he reacted to the loss of his son and what he learned from it, the New Yorker’s Adam Entous noted.

Biden Sr. was very proud of his son Beau and considered him a better version of himself. Since childhood, Biden's family members saw Beau going into politics, like his father. Joe Biden hoped that with the help of Hunter one day Beau could win the presidential election.

The younger brother always supported the elder. At school, Hunter helped Beau get elected the class president by giving out propaganda leaflets.

Family support has always played a key role for Joe Biden's political career. Both sons were present at almost every political event with the participation of Joe Biden. The rally in May 2016 was an exception for Hunter. He did not appear because of regular reports in the press about his drug abuse.

"The notion that I’m not standing next to him [...] it’s heartbreaking for me," Hunter said, but he was worried about how the reports could affect his father.

Newspaper headlines about Hunter will repeatedly cause trouble for Biden Sr. Hunter admits he never wanted to damage his father's reputation.

In 1992, Hunter met a girl named Kathleen. He was 23 years old, and he only received a bachelor's degree in history, however, after three months of dating, Kathleen became pregnant. They married in July 1993. And in 2016, Kathleen filed for divorce.

Prior to this, the couple tried to save the marriage and attended couples therapy sessions. Hunter's alcoholism was one of the problems. At one of the sessions, they agreed that if Hunter started drinking again, he would have to leave the house. A day after their 22nd anniversary, he drank a bottle of vodka and left his marital home forever. In 2017, the couple officially divorced.

However, the next woman in Hunter's life appeared a little earlier. After his brother's death, Hunter became close with his widow Hallie. The couple hid their relationship for a long time, but were exposed by Kathleen. She sought to freeze Hunter's accounts on the grounds that he was spending money on other women, leaving his family in trouble. The request went to the press and Hunter's and Hallie's relationship went public.

The fact that the younger son of the Vice President is dating his brother's widow was not perceived positively. So Joe Biden had to make an official statement to the press: “We are all lucky that Hunter and Hallie found each other as they were putting their lives together again after such sadness… They have mine and Jill’s full and complete support and we are happy for them.”

In early 2019, the couple split. Hunter explained that they were tired of the constant criticism. “All we got was shit from everybody, all the time,” he said.

In early May, Biden Jr. met a South African-born filmmaker named Melissa Cohen, and a week later made her a proposal. The next morning, Cohen agreed to marry Hunter.

The reports about Hunter Biden's drug and alcohol addiction created many problems for both Hunter himself and his father, creating a negative image of a politician with a bacchanal son.

When Hunter started working at a lobbying firm in Washington, D.C. in 2001, he moved with his family to Wilmington, closer to the rest of the Bidens, their native town. He traveled home by train, but he didn't always make it. On such nights he would usually go to the Bombay Club, an Indian restaurant, for a drink.

During his years at the firm, Hunter became a regular client of the restaurant, which was popular with politicians, lobbyists, diplomats and reporters. “When I found myself making the decision to have another drink or get on a train, I knew I had a problem,” he said to New Yorker.

Hunter started doing drugs at university: he used cocaine, sometimes smoked crack. He has been a participant in rehabilitation programs several times, as the media have learned from time to time.

After working as a lobbyist, Hunter wanted to try himself in a more socially important job, like his father and brother. In 2011, he decided to join the U.S. Navy Reserve. Before enrolling, Hunter admitted to having used drugs before. Thanks to a recommendation from a well-known former military intelligence officer, Greg Keeley, Biden was allowed to serve regardless of his age.

Within months, Hunter received a letter stating that traces of cocaine were found in his tests. According to Biden, cocaine could have been contained in a cigarette offered to him by two strangers near one of the bars. However, Hunter refused to appeal, fearing that information could leak into the media. He was fired from the Navy.

In 2016, en route to Arizona to participate in another rehabilitation program, Hunter had a transfer in Los Angeles. At the bar, he realized he had left his wallet with his passport on the plane. So he had to stay in Los Angeles for another week. Immediately after arriving in Los Angeles, Biden asked a homeless man where to buy crack. The man introduced him to a dealer. In the course of the week, Hunter had repeatedly returned to buy more.

The Biden surname has repeatedly helped Hunter to advance his career, but there is no evidence that he used this advantage intentionally. The National Group lobbying firm, where he worked, had a rule: “Hunter didn’t do anything that involved his dad, didn’t do anything that involved any help from his dad.” But Biden's critics call what Hunter did “corruption by proxy”.

In 1996, Hunter became a lawyer at MBNA America, one of the largest donors to Joe Biden's campaigns. At the age of 26, he earned more than his father.

“Certainly lots of children of influential parents end up in very good jobs. But the Biden case is troubling. After all, this is a senator who for years has sermonized against what he says is the corrupting influence of money in politics,” columnist Byron York wrote about Bidens two years later. 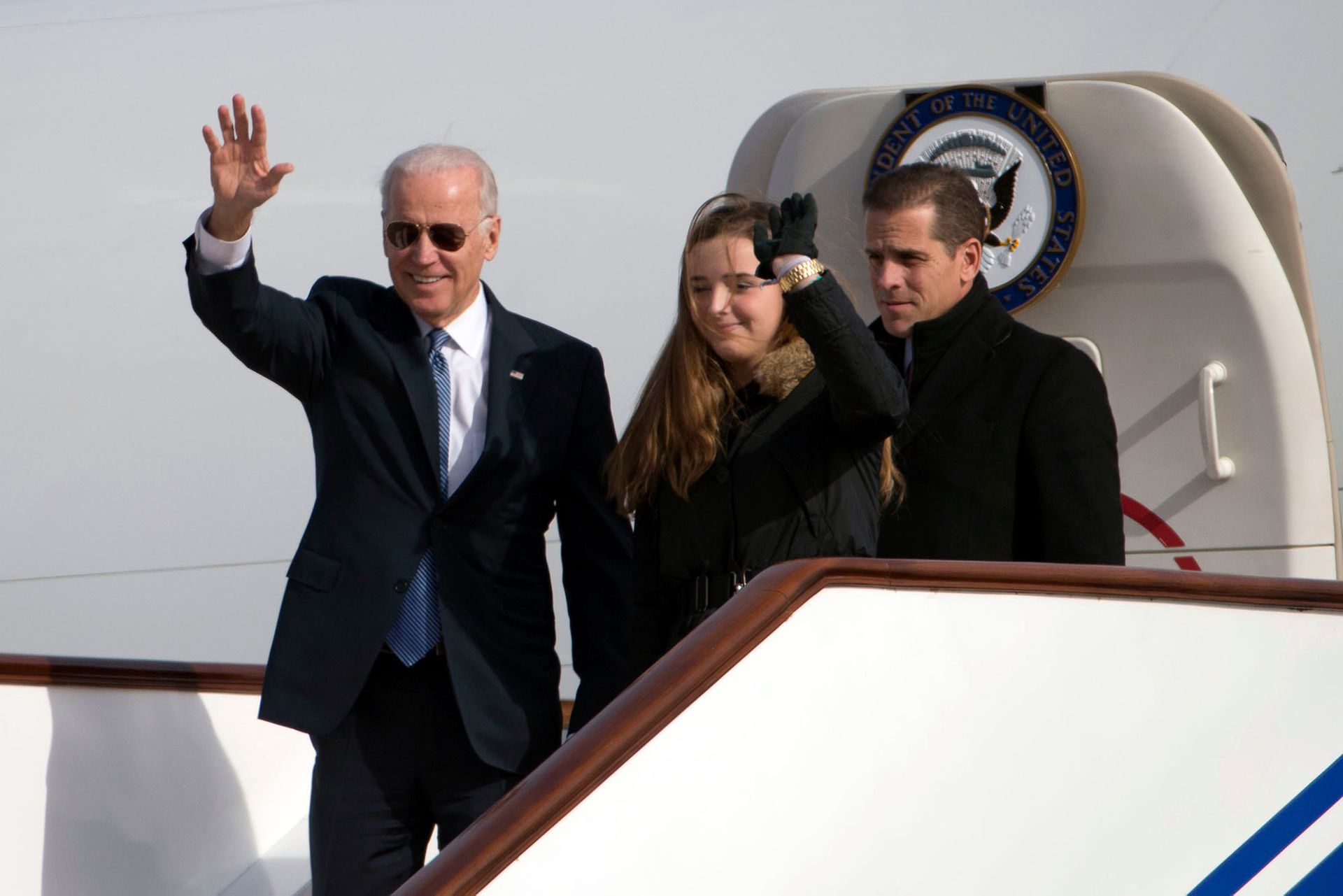 Biden's current critics are alarmed not only by Hunter's work in Ukraine, but also by his business ties in China. In 2013, he and Devon Archer and Chinese investment banker Jonathan Li founded the BHR Partners fund. Hunter became a member of the board, but he did not own any fund shares until his father left the White House.

In December 2013, Hunter arranged that his partner, Li, would shake his father's hand at the hotel where the Vice President was staying during an official visit to China. Later, Biden Jr. was accused of his other firm Rosemont Seneca Partners signing an exclusive cooperation agreement with the Chinese government about 10 days after the trip. In fact, the agreement was signed before Bidens arrived in China, and Hunter himself was not among the signatories.

In 2017, Ye Jianming, a Chinese energy tycoon, had meeting with Hunter Biden. For both, the meeting had a practical interest. Ye was looking for opportunities to invest in energy projects in the U.S., whereas Biden hoped that Ye would make a significant donation to the UN-sponsored World Food Programme, as he collaborated with its U.S. branch at the time.

Later, Biden started using his contacts to sign a deal for CEFC China Energy, Ye’s company. The goal was to invest $40 million in a gas project in Louisiana that would create thousands of new jobs. Biden was very proud of this project. However, in February 2018, Ye was arrested in China as part of an anti-corruption investigation. Hunter Biden said he did not consider Ye to be a “shady character at all.”

In 2014, Biden and Archer join the board of Zlochevsky's Burisma company. Zlochevsky sought to improve the company's image and bring the management in line with the Western standards. In addition to Biden and Archer, former Polish President Aleksander Kwaśniewski became a member of the board of Burisma (and he still works there).

Three months after Biden joined Burisma, the auditing firm hired to inspect the company reported that it could not find information about any investigations that might have been conducted against Burisma or Zlochevsky. Hunter Biden later explained that he had joined the company only to bring about best Western management practices.

The father and the son spoke only once about how Hunter's work at Zlochevsky's company affected Joe Biden's career. As Hunter recalled, his father told him, "I hope you know what you are doing."

American journalist Franklin Foer believes Joe Biden should have honestly talked to his son about his decision to work with Burisma.

“I don't think that reflects very well on his character that he didn't feel compelled to say ‘You know what you really shouldn't be involved with these people, this is a corrupt organization, and as your father I don't want you to do this, and as the vice-president you're doing something that will ultimately look bad for me because I actually care about fighting corruption in Ukraine,” Foer said in an interview with Hromadske.

Applebaum: In the time you waste doing reforms slowly, you can become corrupt