Another Frontline. Kyiv Veteran’s War Is Not Over Yet
Editors' Choice
12576

EXCLUSIVE: The True Cost Of Remaining Ukrainian in Crimea
30908

Inna Volkova's mother watches a slideshow of her daughter's photos during an event in memory of a girl who died on October 20 from a coronavirus infection in Kyiv, Ukraine, October 23, 2020. Photo: Oleksandr Khomenko / hromadske

COVID-19 risk groups mostly comprise the elderly and those with serious illnesses. Many try to set their minds at rest by playing down the danger – as if the coronavirus is not the end of the world. But sometimes the disease does take the lives of those young and – at first glance – healthy.

Last month, a well-known 35-year-old blogger Dmytro Stuzhuk, who fell ill with coronavirus on vacation in Turkey, passed away. According to his ex-wife and blogger Sofia Stuzhuk, Dmytro had problems with the cardiovascular system, so his heart could not resist the disease. An 8-year-old boy died on October 17 in Ivano-Frankivsk region. Doctors told BBC that the child had numerous comorbidities and respiratory problems, so when he contracted COVID-19, pneumonia developed rapidly.

Our protagonist, 21-year-old Inna Volkova, died from the virus on October 20. Her story is different and shocking because everyone considered her completely healthy before she got ill.

That day, on October 3, Inna's roommate accidentally came home earlier than usual. After hearing some noise from Inna's room, she went in and saw the girl on the floor.

"Her limbs had already partly given out, she could no longer call anyone," says Veronika Kobzysta, Inna's friend.

Our protagonist, 21-year-old Inna Volkova, died from the virus on October 20. Her story is different and shocking because everyone considered her completely healthy before she got ill.

That day, on October 3, Inna's roommate accidentally came home earlier than she usually did. Hearing some sounds from Inna's room, she went in and saw the girl on the floor.

"Her limbs had already partly given out, she could no longer call anyone," says Veronika Kobzysta, Inna's friend. 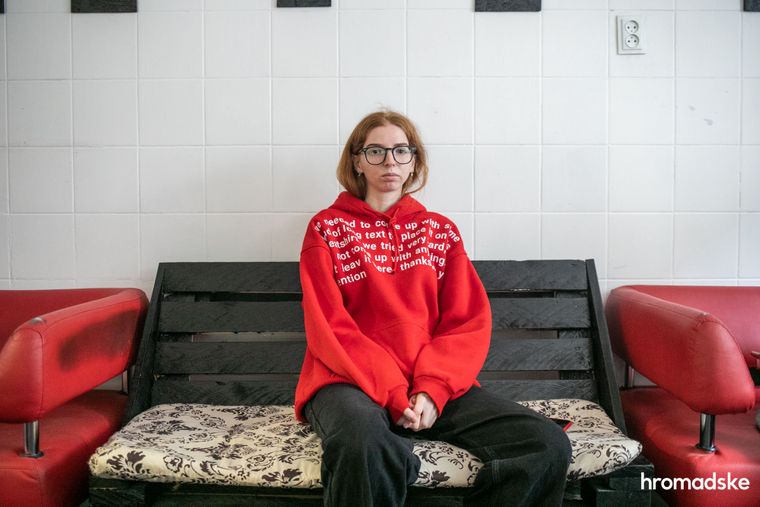 The girl was taken away by ambulance. Several hospitals later, she was admitted to the intensive care unit of Kyiv Hospital №9. Inna's whole body was paralyzed below the neck. She was connected to a ventilator. The COVID test was positive, CT revealed bilateral pneumonia. Eventually, a neurologist diagnosed the girl with Guillain–Barré syndrome (GBS). It is a rare autoimmune disease in which the human immune system damages its own peripheral nerves, partially paralyzing the body. According to the World Health Organization, the syndrome is often preceded by a bacterial or viral infection. But most people recover completely from even the most severe cases.

"Relatives and friends presumed that Inna picked up COVID-19 somewhere, which caused her to develop an autoimmune disease, and because the immune system had given out, pneumonia developed so quickly, which in turn led to the condition taking a turn for the worse," explains Veronika.

Inna hadn't complained about any of the symptoms of the coronavirus before, and no one knew about the syndrome either - it came as a surprise to both friends and family. The girl did have pneumonia twice previously - as a child and three years ago, but did not suffer from any chronic diseases. 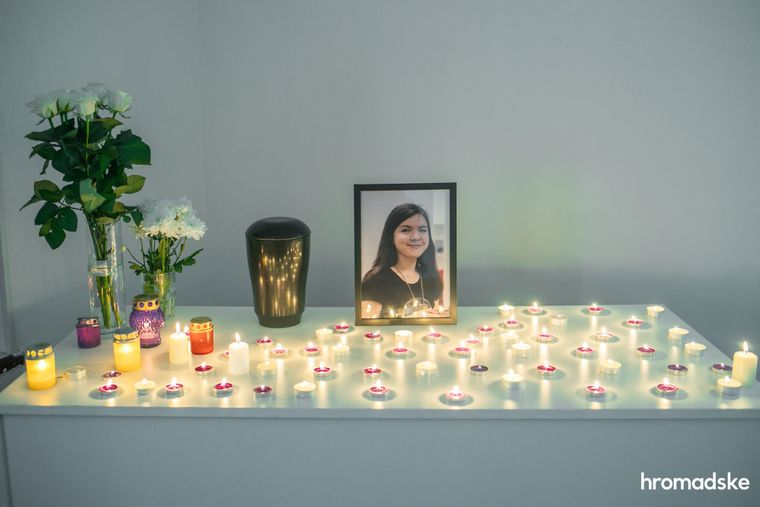 For the first few days, Inna was conscious, and even answered questions by blinking. To treat GBS, doctors prescribed her a generic, i.e. a legal analog of immunoglobulin - Bioven 10%. However, the hospital did not have it in stock, the family had to buy it themselves. One vial costs upwards of 4,000 hryvnias ($141). Inna went through 32 vials, says Veronika. As Inna's family could not cover such expenses on their own, the girl's friends raised funds through social networks.

"People with GBS fully recover in two to four months," says Veronika, "but because she had pneumonia... Doctors said that patients with such symptoms usually do not live past two or three days. Inna held out for two weeks."

After the first week of treatment, Inna underwent a tracheotomy and had a tube of oxygen inserted directly into her trachea. On October 17, relatives and friends were told that she had come out of a coma and reacted to the light with her eyes. However, two days later, she experienced blood pressure spikes, and on the morning of October 20, her heart stopped due to cerebral edema.

Inna turned 21 in June. She moved to Kyiv from the central Ukrainian city of Zaporizhzhia. She was interested in languages, studied English at the Taras Shevchenko National University. She headed the educational vector at the Foundation for Regional Initiatives, volunteered a lot, organized tent camps and other events for young people, was engaged in the Kyiv Youth Center for Civic Education. On October 23, friends said the final goodbye to Inna at this very center. 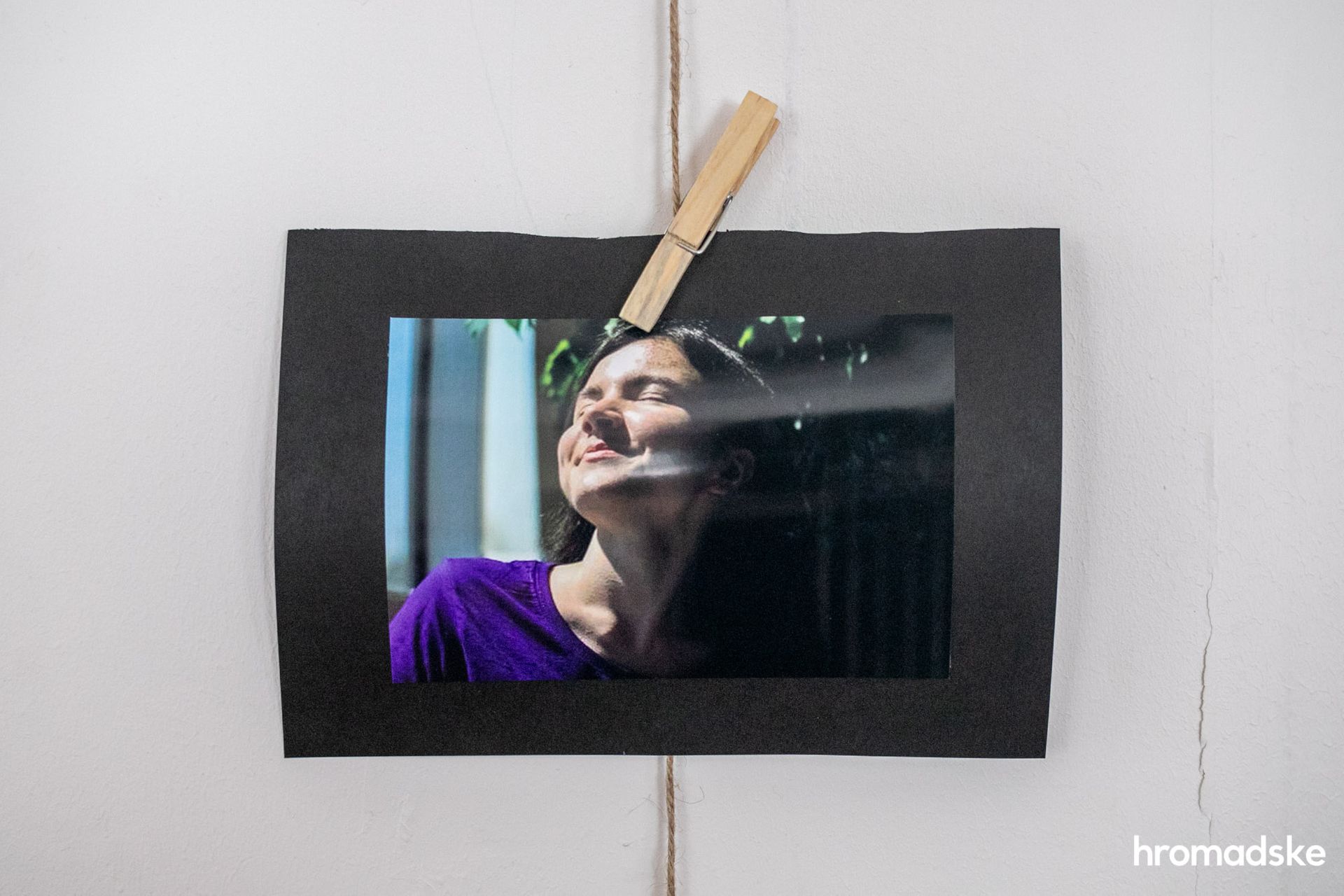 The walls are covered with happy photos from various events and travels, sweets and tea were served on the tables, a playlist that Inna collected for a party served as the soundtrack for the event. A table with candles, Inna's portrait, and an urn with ashes are placed in the corner. According to Veronika, the GBS is not even mentioned in the death certificate; the official cause is coronavirus. Therefore, the girl's body had to be cremated. Her mother asked Inna's friends to celebrate Remembrance Day in this non-mourning format. She sits down in front of the projector and silently looks at Inna's photos.

“I often hear: how are you holding up?” says Veronika who accompanies Inna's mother everywhere. "I don't know, I don't know. I'll probably tell you in a week. I will break down. And so will her mom. Yes, she is coping,.performing some tasks mechanically. And she wants this farewell to be as good and bright as Inna was. You know, there are people you look in the eye and it seems that they can’t lie. Inna was such a person. She genuinely did help everyone - it's not mere words that are pronounced whenever someone passes away." 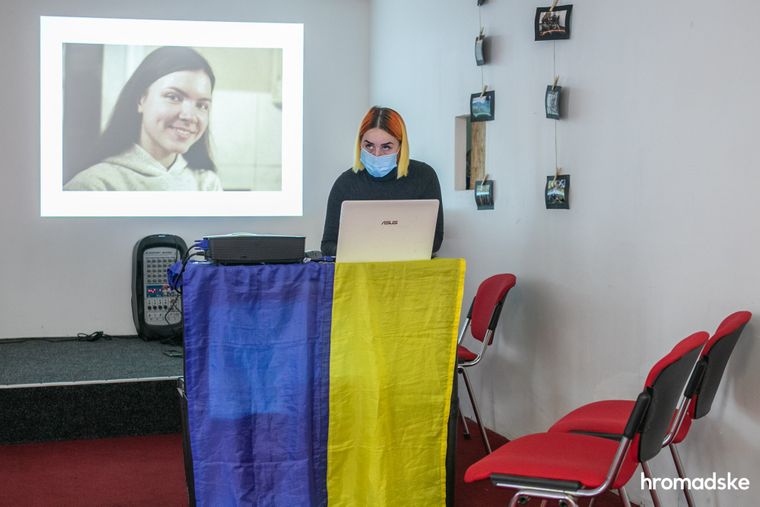 Olha Antonova, another friend of Inna's, recalls that about a month ago the two of them talked about where they would like to go after lockdown when borders are reopened.

"I don't remember exactly where she wanted to go," says Olha. "I listed about 20 countries, she listed 20. We just named the places we would like to visit…"

As of November 21, 612,665 cases of COVID-19 coronavirus infection were detected in Ukraine. 10,813 people died of complications. Veronika says that the red numbers on the page of the Ministry of Health with the number of infected, of course, are horrifying, but dry statistics do not convey what is really happening. 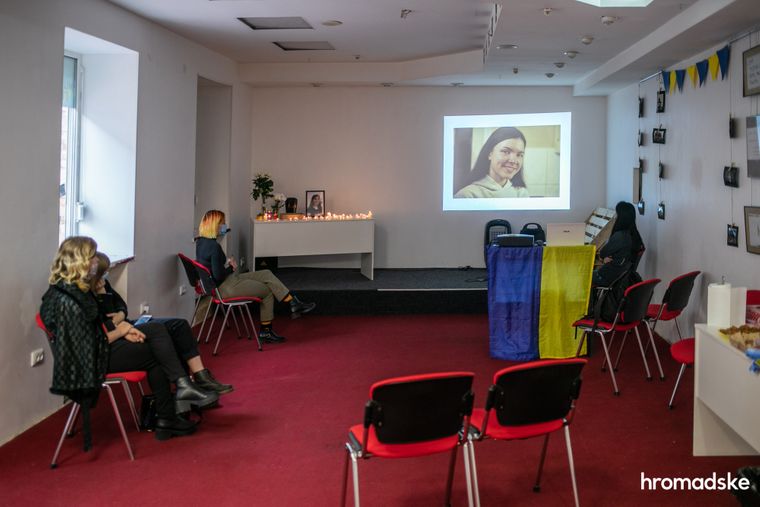 Hall of the Center for Civic Education, where the event in memory of Inna took place, Kyiv, Ukraine, October 23, 2020. Photo: Oleksandr Khomenko / hromadske

"Apart from our personal tragedy, it is also a story about a 21-year-old girl who was completely healthy. Nobody knows what can provoke COVID-19, that's why it's so important to wear masks,”  says Veronika. “Well, my personal experience in ICU during these few weeks when we were delivering drugs, learning about her condition - it is horrible. I would probably advise all coronavirus skeptics to just come to this very hospital once, see the line of ambulances, see the number of people. And then come to the crematorium and see the line there. There is a huge number of people. They come in a stream, each ceremony lasts just 10 minutes."

In the near future, Inna's relatives and friends want to establish a fund to help patients with COVID-19.