“Our Kids”: Crimean Resistance to Political Arrests In Numbers
32016

President of Belarus Alexander Lukashenko speaks at the Women's Forum in Minsk, Belarus, on September 17, 2020. BelTA
The self-proclaimed President of Belarus, Alexander Lukashenko, stated that US intelligence services, along with Belarusian oppositionists, planned to assassinate him and his sons. Meanwhile, his regime is persecuting human rights defenders and other citizens. So what has been happening in Belarus in the past six months of protests?

On April 17, Alexander Lukashenko stated that US intelligence services, along with Belarusian oppositionists, were planning to assassinate him. Prior to that, according to Lukashenko, they planned to take his children hostage and keep them in a cellar, which the Belarusian special services allegedly found in the Gomel region.

"Why do Americans behave like that? Remember: no one can agree to the task of removing the president, except the top political leadership," the self-proclaimed president commented on the situation.

The US State Department has stated that the Americans were not involved in any conspiracy to assassinate Lukashenko. However, the Russian FSB even found a trace of Ukrainian nationalists in this story.

READ MORE: The Father That Doesn't Want To Leave: Between Authoritarian Violence And Social Anger in Belarus

"The armed uprising between the conspirators was code-named ‘Silence’," the national Belarusian TV channel ONT reported. According to the plot, at first, the conspirators allegedly discussed the details of the uprising via Zoom conferences, and then some of them met in Moscow. After that, they were detained.

"They were afraid to come here (to Belarus - ed.) After we detained several groups who brought weapons here and laid them out in hiding. They went to Moscow,” Lukashenko said. "I asked the president of Russia, while Ivan Tertel (the head of the KGB of Belarus - ed.) spoke with his colleague Sasha Bortnikov from the FSB, and we caught them there."

The participants in the meeting in Moscow allegedly discussed the task: to eliminate the "most important one", to block the internal troops and riot police, as well as to occupy several symbolic objects in the city center (including radio and television offices) to voice the address. 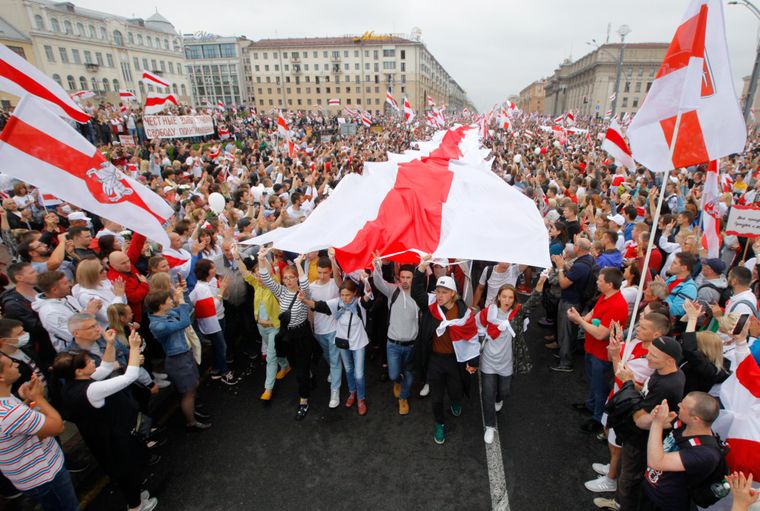 "This is the common talk in the kitchens," commented Belarusian human rights activist Sergey Ustinov. "97% of Belarusians hate Lukashenko and discuss that he and his entire elite intimidating Belarusians, should be removed from power."

According to Lukashenko, Belarusian political scientist and literary critic Aleksandr Feduta and lawyer Yuri Zenkovich, who had US citizenship, were involved in the plot. They were detained in Moscow. Feduta lost contact with his wife on April 12, and a few days later the KGB confirmed that he and Zenkovich were in a Minsk pre-trial detention center.

Grigoriy Kastusyov, the leader of the Belarusian People's Front, one of the country's oldest opposition parties, also allegedly took part in the conspiracy. He was detained on April 12.

"Come on, Rygor, let's wipe Luka out together, and we'll decide who will rule in Belarus later," Zenkovich suggests on video during a Zoom call.

"If we can decide who it will be, then so be it," says a black rectangle named "Grigoriy Kastusyov."

Pavel Sverdlov, editor-in-chief of the Belarusian Euroradio service, believes that the whole story could have been provoked by the Belarusian security forces, for example, by sending their own people to incite others to take active action.

"If I were a member of the secret services and were engaged in state security in such a sad country as Belarus, with such law-abiding citizens who do not accept forceful methods of struggle and protest peacefully for six months, I might have genuinely cooked something up or organized it myself. At least in order for the country's top leadership to continue to think that Belarus needs these special services very much, so they need to be well funded,” Sverdlov said.

Besides, according to him, this is not the first time the authorities in Belarus have announced the uncovering of a conspiracy during social, economic or social crises: the list of terrorist acts and attacks on Lukashenko, allegedly planned in Belarus for the past 27 years, is quite long.

In particular, Lukashenko's team announced an attempt to assassinate him a week before the first presidential election in 1994. The investigation was never completed, Lukashenko became president, and security officers, who called the assassination attempt an imitation, were removed from office, says Sverdlov. 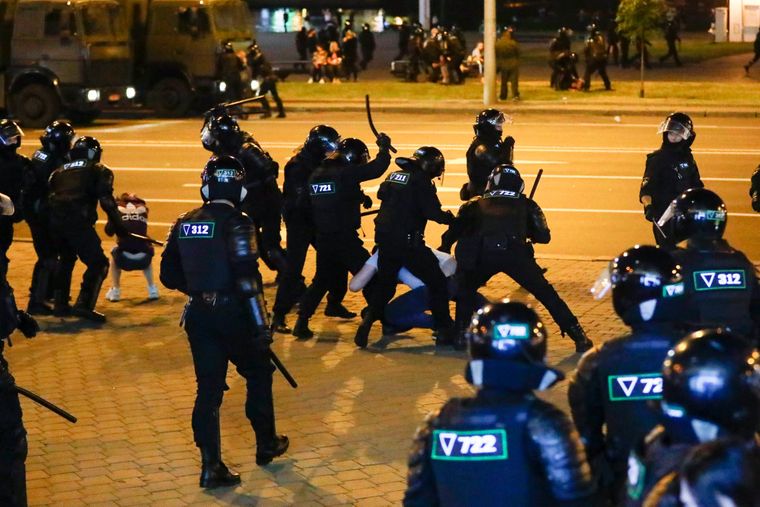 Police use batons against demonstrators at a rally on August 10, 2020 in Minsk, Belarus. Photo: AP / Sergei Grits

Statements of a new assassination attempt on Lukashenko came amid escalating repression in Belarus. Today, not only those who actually take part in the protests are being persecuted, but also journalists, human rights activists and even passers-by. Up to 30 days in prison can be on the cards for a photo on social networks or white-red-white clothes (colors of the historical national flag of Belarus).

"More than a thousand criminal cases against peaceful demonstrators. Tens of thousands of detainees in administrative cases with subsequent torture: chlorine, lack of heating, hygiene, medical care. People are scared," human rights activist Sergey Ustinov commented on the situation in the country.

In addition, hundreds of politically motivated criminal cases have been filed. As of April 20, 357 people were recognized as political prisoners, and this number is constantly growing. At the same time, there are still no criminal cases for torturing or killing demonstrators.

Security officers testifying in court come in balaclavas, with fake names and false information - Ustinov says that the law has been changed in Belarus specifically for this purpose.

"A person who holds the presidency purposefully rewards punishers for mass torture. For the fact that they allegedly saved the Motherland through these tortures, beatings, shootings and murders," the human rights activist said.

Ustinov is a co-founder of the International Committee for Investigation of Torture in Belarus. After the August protests, human rights activists interviewed about a thousand people who had been tortured and released three reports.

In early March, Belarusian security forces searched the committee's volunteer Ivan Kravtsov and arrested him. Ustinov says that after that the man had to feel all the tortures first-hand. At the beginning of April, a search took place in the house of human rights activist Enira Bronitskaya, and during the interrogation, law enforcement officers were interested in the activities of the committee and other members of the committee.

After that, Ustinov and his colleague Viktoria Fedorova left for Ukraine. However, Ustinov says that even here they do not feel safe - they are afraid that they may be abducted and handed over to the Belarusian security services. Such cases have already happened to other Belarusian activists: for example, in 2019, the Security Service of Ukraine detained and deported to Belarus a former political prisoner, Aleksandr Frantskevich.

"We are not going to leave the territory of Ukraine. We work here and will continue to work for the benefit of Belarus. However, if we are suddenly taken to Belarus, where we find ourselves in the KGB or elsewhere, it will mean a deliberate operation of special services was in place," Ustinov said. 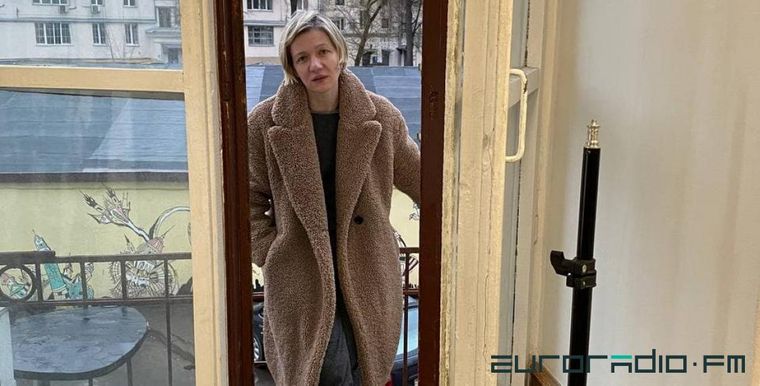 Another human rights activist who had to leave Belarus is Ukrainian Vladimir Yavorsky. At the end of March, the Belarusian authorities closed the exhibition "The machine can breathe, but I can’t" in Minsk, dedicated to the heroic work of doctors during the pandemic. Tatiana Gatsura-Yavorskaya was its co-organizer. She is Yavorsky’s wife, a human rights activist and founder of the Zvyano public association.

In early April, security officers came to Tatiana and four other colleagues with searches. Gatsura-Yavorskaya was detained - she is currently a suspect in a criminal case over financing and organizing of mass riots (i.e. protests).

A week later, her home was searched again, and then Yavorsky was detained. After a three-hour interrogation, he was forced to leave Belarus without any relevant instructions.

"I was told that in the interests of my own safety, I had to leave the country within 48 hours, take the child with me and not return for 10 years," Yavorsky said. "They actually started blackmailing me, saying that the children would be taken to an orphanage, and I would be taken out and thrown out at the border or put in prison."

After Yavorsky left for Ukraine on April 15, Gatsura-Yavorskaya was released, but banned from leaving Belarus.

"Some of the children are now in Belarus, and some - in Ukraine. They completely separated the family," says Yavorsky.

According to him, he and his wife had never protested, and that the persecution was an attack on human rights activities. Yavorsky says human rights activists have been questioned about the documentary film festival and the prison rehabilitation center. Allegedly, the authorities believe that such activities incite people to protest.

Mass protests began in Belarus last summer and ended only with the onset of winter. Pavel Sverdlov, editor-in-chief of the Belarusian Euroradio service, believes that the next trigger for people to take to the streets could be Lukashenko's decision to deepen integration - that is, the actual unification of Belarus with Russia. This is exactly what people protested in 2019.

So far there have been no such announcements. However, after the statement about the assassination attempt, Lukashenko announced that he would soon announce some "very important decision."