13 people killed, over 60 houses damaged in a day In Luhansk region as a result of Russian shelling
1544

AP releases video from paramedic Taira's body cam, who handed over footage the day before she was captured by Russians
Editors' Choice
22239

A Hello to Arms: Is There a Black Market for Guns in Ukraine?
8630

Our editorial office works around the clock from different parts of Ukraine so that you are aware of what is really happening. If what we do is important to you, and you have already donated to the Armed Forces of Ukraine, you can support our information troops.

"Battle Group K2". This is the name of the unit currently fighting in the Donbas as part of the 54th Mechanized Brigade named after Hetman Ivan Mazepa. Videos of the battles of this unit garner hundreds of thousands of views on Youtube. A video report on the repulse of the tank attack near Donetsk was among the ten most successful in the history of hromadske.

In this article we tell more about the soldiers of this unit and their philosophy of war. 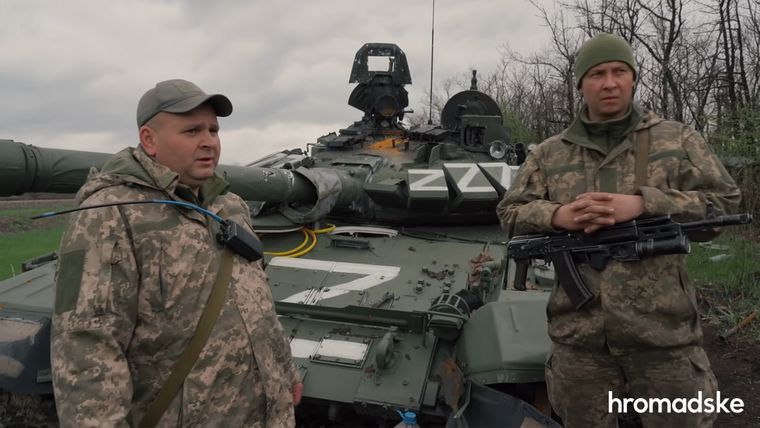 hromadske met with K2 unit commander Kyrylo Veres on the outskirts of Maryinka, near Donetsk. The whole conversation was accompanied by the sounds of an artillery duel. Veres's subordinates were working against the Russians.

After this work, the commander edits and posts videos of battles on social media. "We are not publishing clips for recognition. I do this so that people can see that there are successes, that the military is not twiddling their thumbs. Many of the servicemen are working themselves to death," Veres said.

It is from the commander that the unit takes its name. Once at the checkpoint, a soldier struggled to pass on the name and patronymic of Veres — Kyrylo Kyrylovych. So he finally said "K2 entering." Since then, the name K2 has stuck to Veres and his unit.

K2 is an informal unit of the brigade. About 600 people are subordinated to Veres. K2 includes several dozen. The commander does not name the exact number of members of the group. "It's a group of scouts and others, who are just doing their job," says Veres.

He adds that he values ​​his subordinates in the brigade no less than his lot from K2. However, K2 is considered an elite unit. The main part was formed during the anti-terrorist operation within the 92nd brigade. These were scouts who eventually became "universal soldiers."

"In 2016-17, to help us we enlisted mortar gunners, ATGM (anti-tank guided missile - ed.) operators, pilots. The guys did well, they helped. But I believe that they did not give their 100%. And I realized that I had to make sure that my people could do everything on their own," explains Veres.

90% of K2 soldiers are order-bearers. Almost all of them have the Order of Courage of the third degree, and two fighters have earned two orders each — second and third degree. They will soon become full knights. Veres himself is a full cavalier of the Order of Bohdan Khmelnytsky. And on April 4, 2022, by the presidential decree, Veres was awarded the title of Hero of Ukraine.

However, awards from the state are not the only K2 awards. The fighters have a separate chevron of the unit with their own names. "To get it, you need to serve 5-7 months, prove yourself in work, do a lot of things. And only then will we award the chevron at the general voting if the unit accepts the fighter," Veres explains. 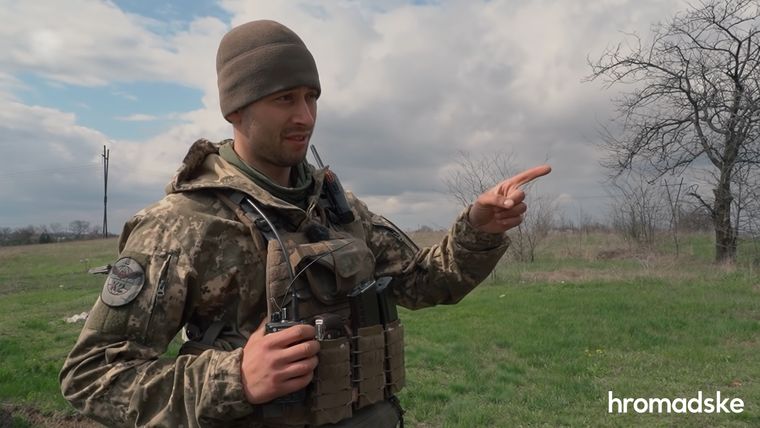 A cure for destroyed armored vehicles

Tank breakthrough is one of the most famous battles in which K2 took part. It was on the outskirts of Krasnohorivka near Donetsk. There, the enemy tried to break through the defense of the platoon base. Seven tanks, two infantry fighting vehicles and two armored personnel carriers with infantry approached the Ukrainian positions, as well as the UR-83P "Zmey Gorynych" mine-sweeping system.

Initially, four enemy tanks came to a distance of 400 meters. Then there was a powerful artillery shelling. And afterwards, a full-fledged offensive, which was stopped 150 meters from the Ukrainian positions.

Platoon base commander Oleksiy "Myron" has been at the front since 2014. However, he considers the tank breakthrough the most difficult battle of all time: "We have all the heroes here. Nobody expected us to stop them. We did not expect what we did. But we did what was required of us."

In that battle, only one Ukrainian fighter was lightly wounded. Instead, the Ossetians among the Russian army lost almost all armored vehicles. In particular, the latest T-72B3 tank, which only came off the assembly line last year. Such tanks take part in parades in Moscow. Now one is left on the battlefield 150 meters from the Ukrainian positions.

However, the battle of the 54th Brigade was remembered not only by Russian tanks. "I am so confident in my platoon base that everyone was in their positions and everyone held the line. Nobody ran anywhere, everyone stayed. I am confident in these guys and I will stand with them until the end," says Dmytro "Che Guevara".

Such staunchness of subordinates was a pleasant surprise for Veres too. He does not have time for deserters. And to retreat, he says, is worse than holding positions. Because then it will be more difficult to regain the territory. And behind the unit is Krasnohorivka, where civilians still remain.

"Residents of Krasnohorivka always ask if we can withstand the pressure. We say we will lay down our lives, but we will not retreat," said the branch commander Viktor Trotsyk. 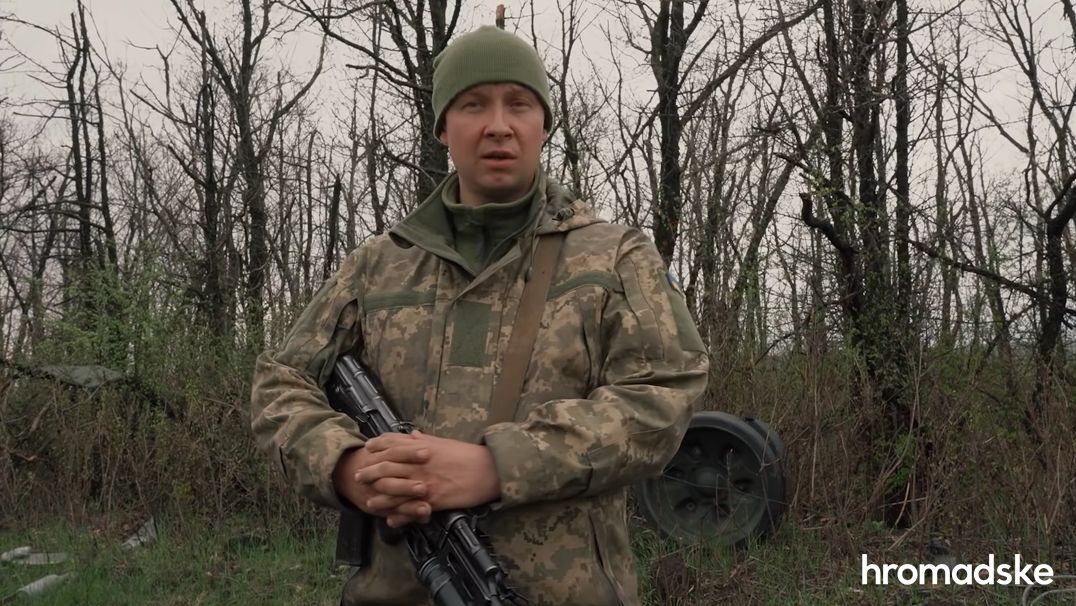 And they proved it more than once. Once in the Donetsk Oblast near the village of Stepne, a unit of the 54th Brigade defeated a column of the enemy, which advanced from the village of Berezove. There were 28 armored vehicles in the column. "We destroyed the infantry fighting vehicle, four tanks, the rest effectively formed a traffic jam, they could not proceed. Their tanks put out of action hindered the movement of other tanks. And they retreated," said the deputy commander of the Phobos artillery battalion.

The following day, the enemy tried to break through the Ukrainian defenses with infantry. But even that offensive was repulsed. About one platoon of Russians was killed (a platoon is 15-45 soldiers - ed.). One was taken prisoner.

In total, at the time of the conversation with hromadske Veres counted 39 units of armored vehicles, which were destroyed by his unit. 25 of them are tanks. One of the last was among the achievements of Veres himself. Subordinates could not carry out the order to destroy the enemy tank, which bothered the unit for several days. They explained that it was very difficult to do. Then the commander took the Javelin and went hunting for the enemy.

"He fired. Five minutes later he picked up the radio and said: 'I did it, now it's your turn'. And they asked me not to come to their position anymore, now they could do it themselves," Veres recalls. 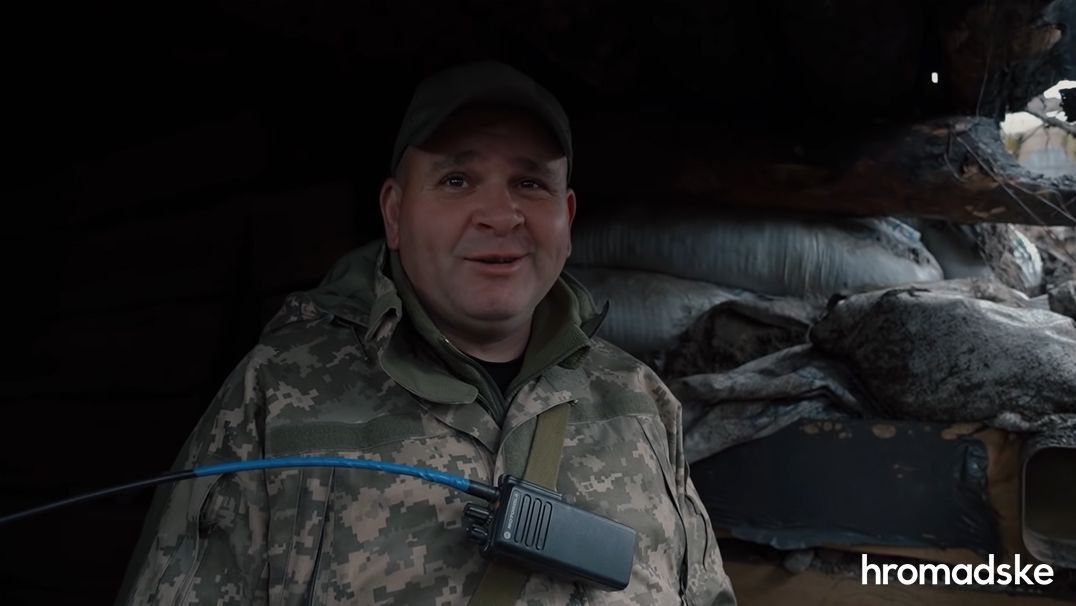 Myron, commander of the platoon base K2. Photo: hromadske

On average, one unit of destroyed equipment every two days. The K2 fighters themselves have bigger plans. "We have a slogan: destroy a Russian, so the day does not pass by in vain. If you didn't kill anyone — your day was wasted," says Veres.

The commander of the platoon base, Oleksiy "Myron", has an incentive to destroy as many Russian aggressors as possible, so that they refrain from coming to Ukraine for several generations to come. "It is gratifying that we are living in such a crucial historical moment that we are finally defending Ukraine's independence after so many generations. That's the most important thing," says Myron.

"Let them come, however many of them come, that's how many of them will rest here. This is our land, we know what we stand for here," added warrior Dmytro "Che Guevara". 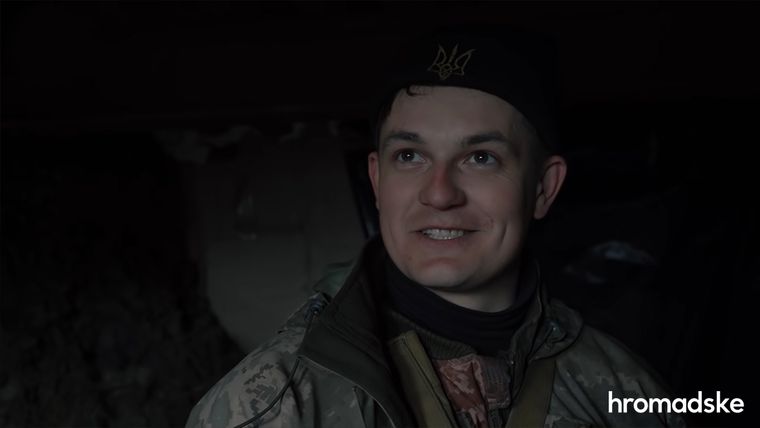 A destroyed Russian tank is better than sex

And the commander of the Phobos artillery tells how he is thrilled with each Russian tank put out of action: "You can't convey these emotions when you destroy a tank. It's adrenaline, it's positive emotions. To some extent, it's better than sex." The artilleryman adds that the destruction of the enemy is also revenge for the dead lads, for the destroyed houses, for the captured Ukrainian land.

The commander of K2 Veres also lost his home in this war. He lived in Hostomel near the airfield. However, he is happy that the enemy was expelled from there, so there is somewhere to go back. "It's bad to fight in your own country. It would be better to fight in the Belgorod Oblast. Or in Rostov. To burn them, just as they burn our cities and villages, so that they think not how to crawl forward, but how to evacuate their civilians. You can't say that, but it's a war. It would be better for them to have losses," the K2 commander thinks.

In this war, he dreams not only of victory and free cities, which the enemy does not fire on with his missiles. Veres wants his 8-year-old son not to have to go to war as a 20-25-year-old boy in the future. "Evil must be nipped in the bud," says Veres.